There’s no denying the fact that I am a pasta lover. 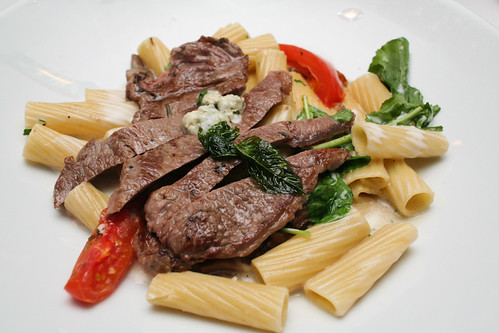 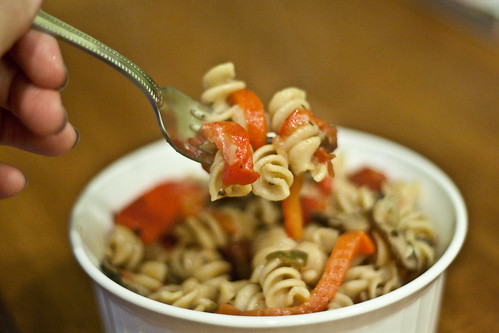 Just give me some sort of noodle and some kind of sauce to go alongside it, and I am a happy, happy girl. Unfortunately, eating tons of this carb-y goodness isn’t exactly conducive to the whole weight loss thing I’m still attempting to complete. Especially when the aforementioned sauces generally tend to be buttery and creamy and oh-so-artery-cloggingly delicious. 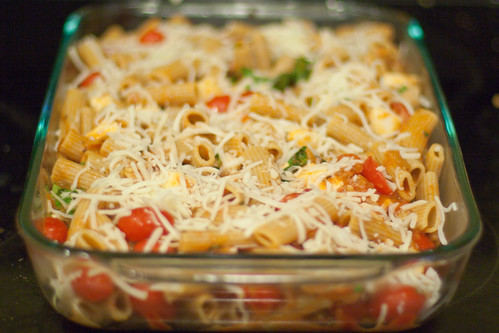 While I do have a few healthy pasta recipes that are delicious and nutritious in my arsenal, I still have a big problem with proper portioning. A mere two ounces of spaghetti is supposed to be a serving, and that’s simply never enough. 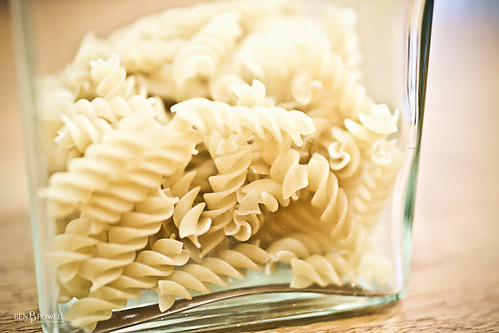 So a couple nights ago, I finally decided to bite the bullet and try out yet another fad I’ve been seeing grace the healthy living blogosphere for a while: spaghetti squash! 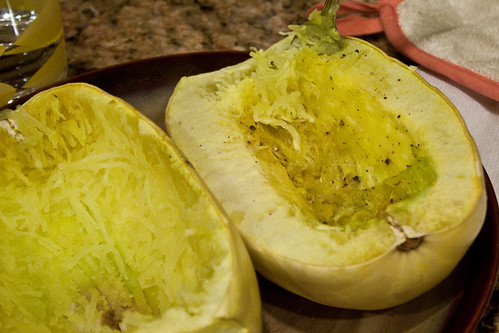 I recognize that these photos look like ish because I forgot to swap lenses, but please just bear with me. After all, I’ve got a MIRACLE to share here! 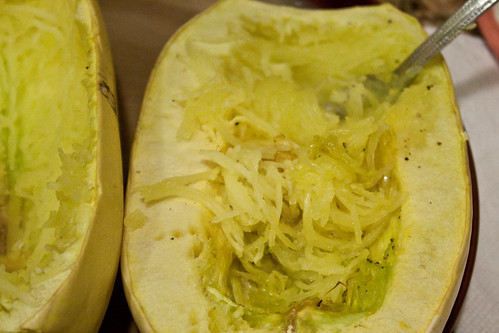 Because surely nothing less than a miracle could be responsible for a vegetable tasting almost exactly like pasta, right? Label me officially flabbergasted. 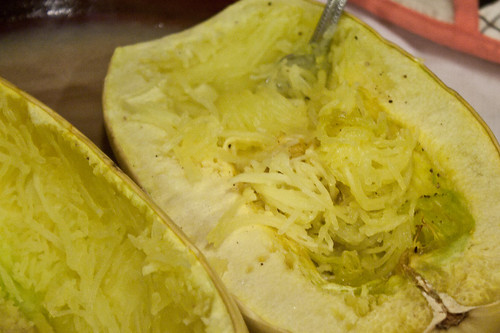 I split a spaghetti squash in half, de-seeded it, and sprinkled salt & pepper over it. I then threw both halves onto a baking sheet and baked/roasted/whatevered them at 375 degrees for 20 minutes… but then got really, really impatient when it wasn’t cooked by then. Soooo, I put them on a plate and finished them in the microwave – 5 minutes on high with a paper towel draped on top. Obviously if you were a non-crazy person, you might actually look up appropriate cooking times and/or methods, but hey, it worked out! 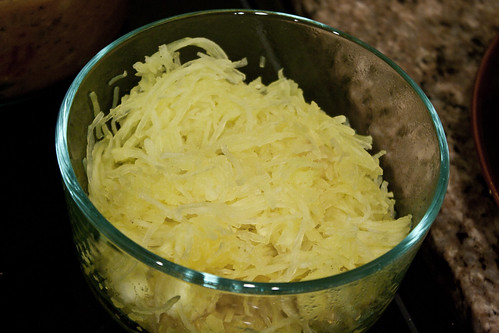 Once cooked through, the flesh becomes soft and the spaghetti-shaped strands (hence, er, the name. Duh.) just pull away from the sides. You get a TON of “noodles” out of a single squash. The picture above shows the amount I got from only one of the halves! 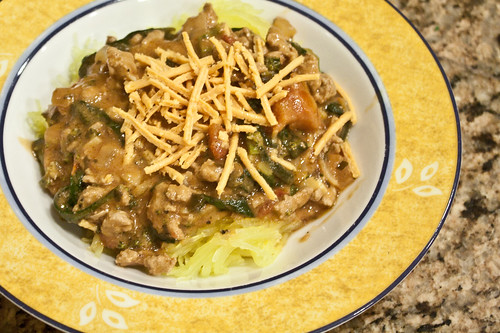 I cooked up a sauce with ground turkey, onion, garlic, broccoli, and spinach — in a tomato sauce + alfredo sauce base. Then I added a splash of almond milk to thin it out, seasoned it, and voila! I won’t lie: of course the texture is a bit different than real pasta. But the squash tastes SO much like spaghetti, I honestly could NOT believe my tastebuds! It barely has a squashy (haha) flavor at all, and pairs SO well with sauce. I was hesitant at first to jump on the spaghetti squash bandwagon, but now? Well, consider me a convert. 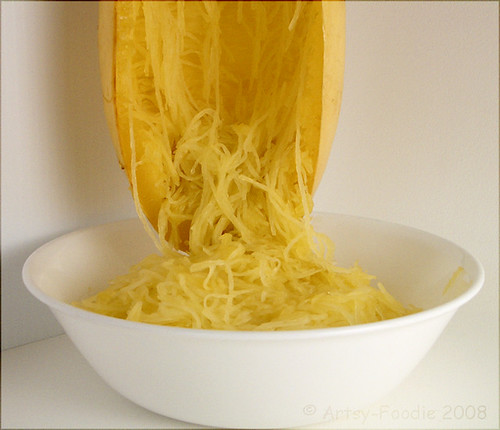 Want to hear the best part? A cup of spaghetti squash has — are you ready for this? — 42 calories. FORTY-TWO CALORIES! Compare that to the 200+ calories you’d likely be looking at with the same amount of whole wheat pasta, then go try this magical vegetable for yourself. I may still need to work on my portioning problems, but at least with this I can overeat guilt-free, hahaha.

Have you tried spaghetti squash before? Have you used it as a pasta replacement/substitution? There are only a few substitutions that are really worthwhile (plain greek yogurt for sour cream is one of them), but this has definitely made the list.