So in addition to book clubbin’ and the insane number of hours I have already sunk into playing Final Fantasy XIII-2 (nerd alert!), I did do a little culinary exploring over the weekend. While looking for a place to eat Saturday night, Sean and I stumbled across Bon Chon Chicken, which has incredible reviews on Yelp. A chain that started in New York (I think…?), Bon Chon is a Korean fast-casual joint that serves what Yelpers refer to as “crack chicken”. As in, the chicken is so good it’s like crack. With rave reviews like that, we knew we had to try it! 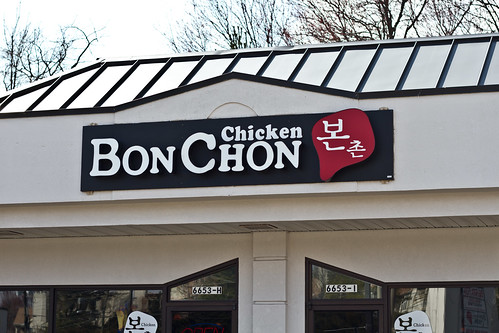 Because the reviews also said that the wait is ridiculously long (right on the menu it states that the chicken takes 35 – 40 minutes to cook, and reviews all said to call and place your chicken order ahead of time), we decided to defer our chicken craving until the next day. We didn’t bother calling ahead since this was our very first time going, and didn’t really know what to expect. There are three Bon Chon locations in Virginia: one in Fairfax, one out in Centreville, and the one that we visited, which was in Annandale (also known as West Korea due to the insane number of Korean restaurants and businesses in this area). It’s clearly quite the local little gem, since even in all our mutually Whasian glory (he’s half-Korean and I, as you know, wave my half-Chinese flag high and proud), Sean and I were still the whitest people in there, haha. 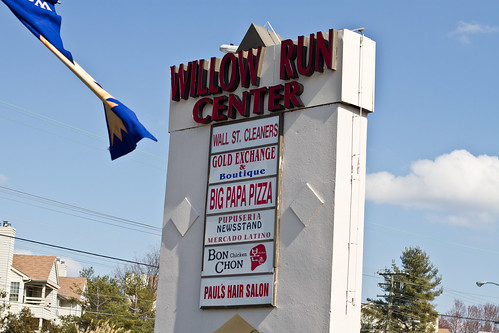 The restaurant is tucked away in a little strip mall off of Little River Turnpike (just like everything else in that area, haha). Reviews had said that the service was really bad and inattentive, but I didn’t find that to be the case. Of course, we went at noon on a Sunday, so I imagine that things get a little crazier on Friday and Saturday nights. We were seated in a booth immediately and put in our order. The chicken comes in two flavors — soy garlic or hot — and two cuts — wings or drumsticks. We ordered a combination so we got both wings and drumsticks in both flavors. Apparently, in other locations you can also get chicken tenders but the Annandale locale didn’t offer this. 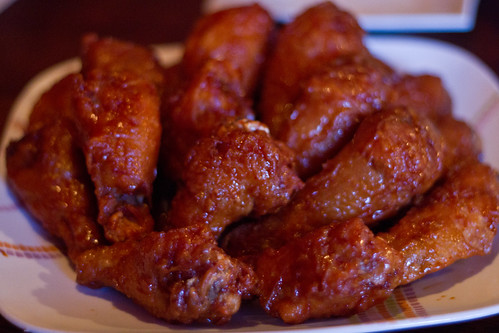 Now, I’ll be honest, it did take about 45 minutes for the chicken to come out. I’m not sure what cooking technique takes so long for, you know, fried chicken, but I will tell you that it is SO worth it. They’re not quite the same as traditional wings. They’re a little bit sweet, almost caramelized on the outside, but insanely good. The chicken is super crisp on the outside but incredibly moist inside. The hot flavor is really pretty hot (they’re not blazing, set-fire-to-your-nostrils-hot, but it builds!) and had me sniffling pretty quickly, but very delicious. And the soy garlic? NOM. I liked the wings slightly better than the drumsticks in terms of cut. 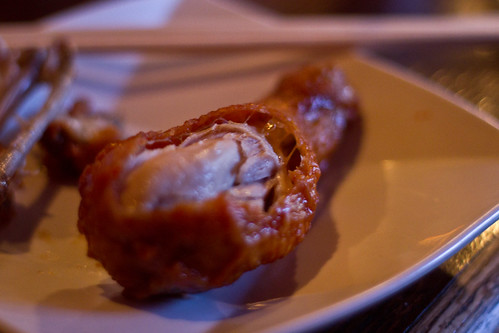 We speculated that they must have some sort of air-injection technique or something that separates the skin from the meat for extra crispness, which would explain why it takes so long to prepare. And if you need proof, just look at the amount of space between the two in the picture above! 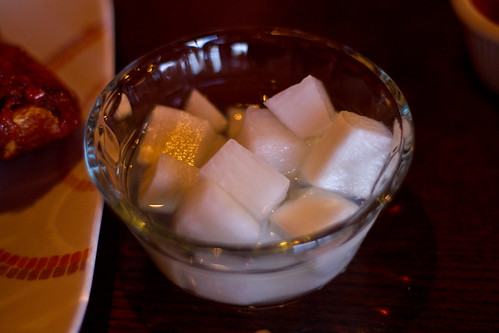 Each order of chicken is served with a bowl of pickled radish, which I enjoyed since it helped cool down my tongue after eating a couple of the spicy ones. We definitely had some left over, and ended up polishing them off for dinner (with a big bowl of brussels sprouts for me as well. Balance, right? HA.) They obviously weren’t quite as good as getting them fresh, but they held up pretty well. Our experience at Bon Chon definitely made converts out of us! I am still thinking about that damn chicken two days later, so I definitely get the crack analogy. We now know to take everyone’s advice and call ahead to place an order for the chicken, especially now that we know what we like. Even just remembering to call when you get in the car could save you 10 – 15 minutes of wait time, or more if it’s particularly busy. 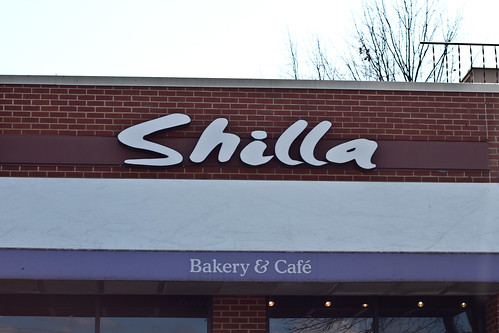 Our run in Little Korea wasn’t quite over yet though. Since we were already in Annandale, I insisted on taking Sean to Shilla Bakery, a Korean bakery that I had only been introduced to myself a few weeks before by my friends Michael & Erik (hi guys!). Shilla also has a few locations spread out over Northern Virginia, and reminds me of the Chinese bakeries from Taiwan that I miss so much. 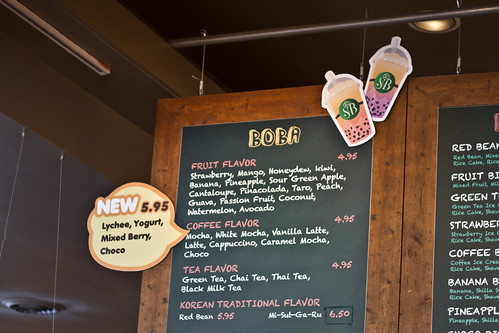 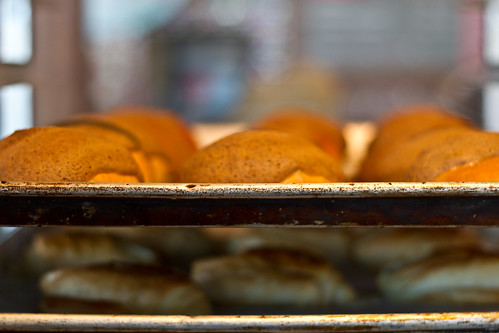 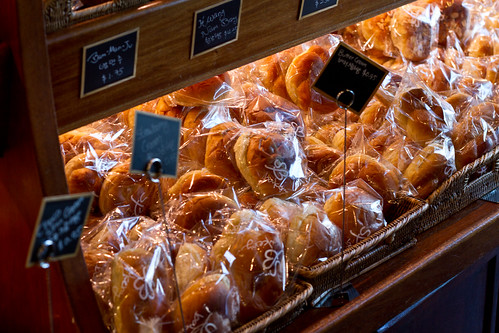 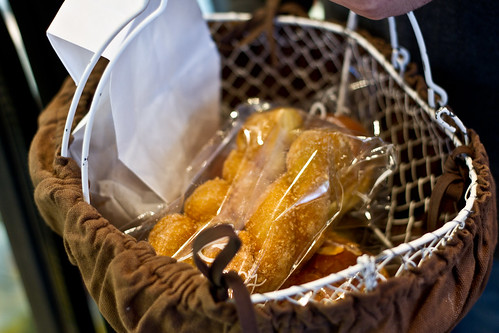 I picked up a few buns and whatnot to take back with me, but what I was really there for was the Boba. Boba milk tea, or pearl milk tea, is a drink that originated in Taiwan and is the single thing that I miss most about living in Taipei. It has tapioca “pearls” in the drink, hence the name. I still have yet to find a really good pearl milk tea place here, but Shilla’s frozen versions are pretty darn delicious. 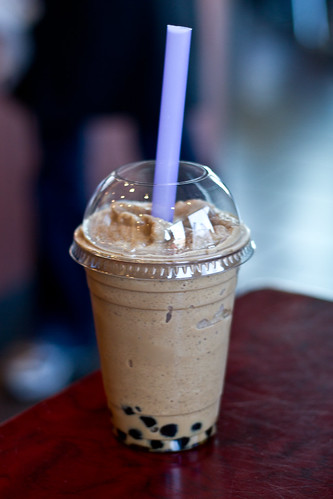 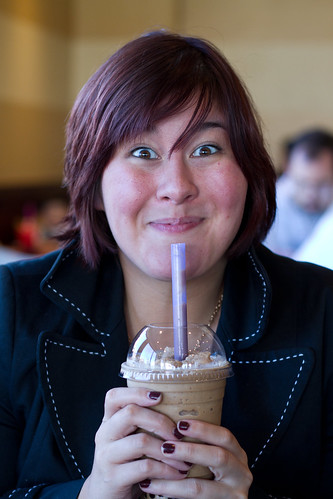 It’s not quite the un-frozen nai cha (Chinese for “milk tea”) that I yearn for, but it’s good. I don’t know if I’ll ever stray from the good old-fashioned black tea flavor (sooooo good!) but they come in pretty much every possible flavor you could think of at Shilla, if that’s your thing. Our venture into Northern Virginia’s little piece of Korea certainly left me content. 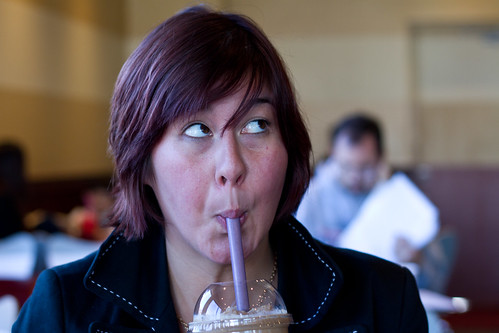 Have you ever had Korean fried chicken before? Or pearl milk tea? If not, I suggest you hightail it to the nearest Korean shopping center (c’mon, every place has ’em!) and try them out for yourself!