Well, I think it’s safe to say that Winter has come to Northern Virginia. Despite the fact that it was 75-degrees and sunny a week ago, the past few days and have felt like they’re of Winterfell-level proportions. Lows of 29 and 30 – brrrrr! The upside? 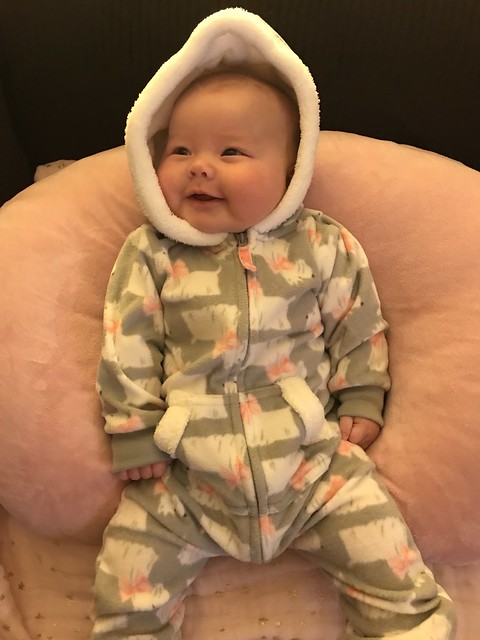 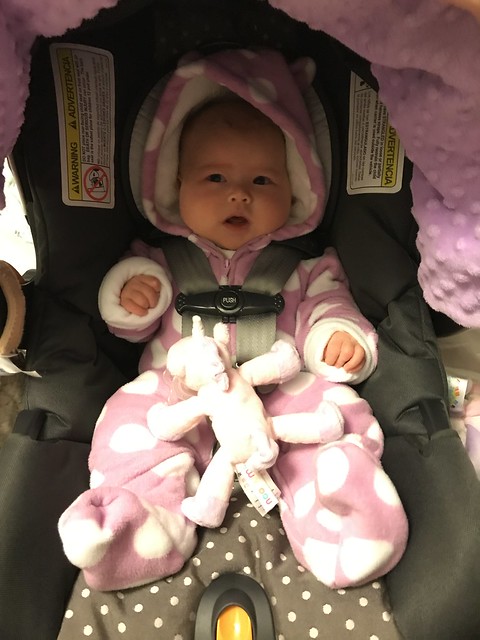 I’ve been able to make use of these stinkin’ cute fleece bodysuits that make Penny look extra-strength adorable. 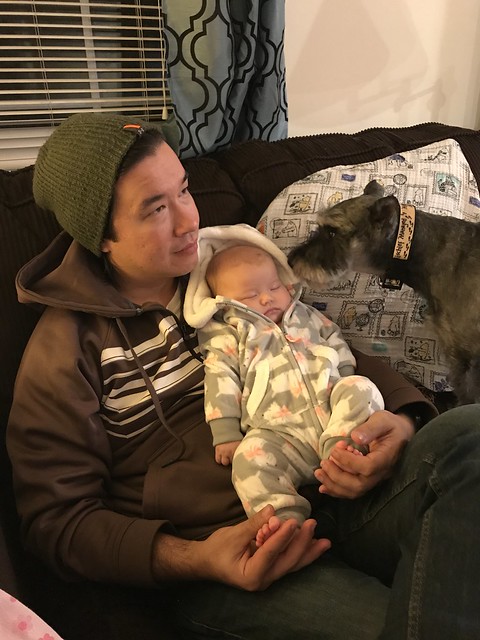 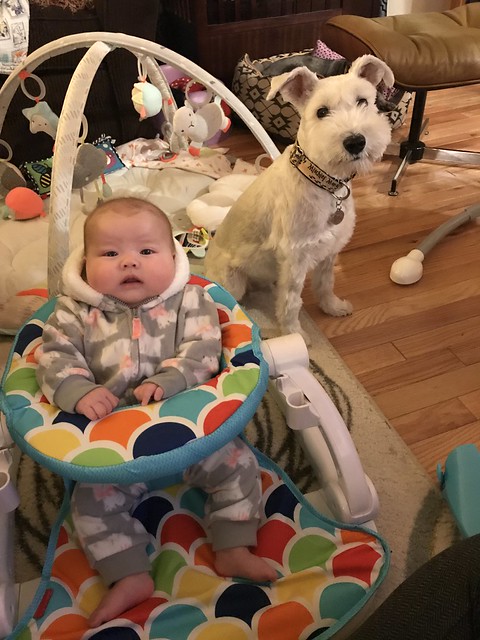 We’ve certainly been keeping busy since last we checked in with you guys! Lots of time spent with family (that’s Uncle Ben hanging out with Penny in the photo above) and friends, old & new, plus Penny went to her first party and had a grand old time!

So, Wednesday night I finally got fed up with what was going on with my roots, and tried to re-dye my hair under the VERY MISTAKEN ASSUMPTION that Penny had gone down for the night and I had at least, like, 90 minutes before she woke up again. Well, I was unsurprisingly very wrong, and with Sean already asleep and me not wanting to disturb him (he has to get up very early for work), I had to pull my very best Tim Gunn and make it work. 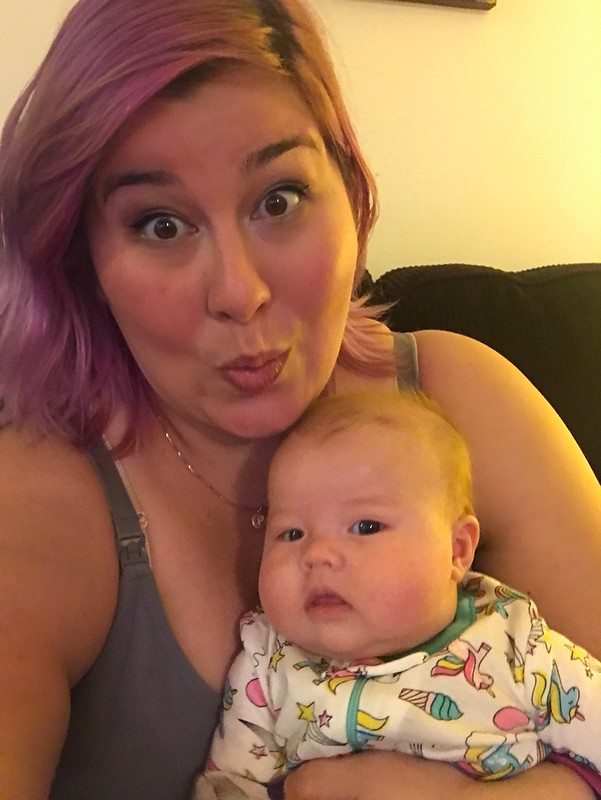 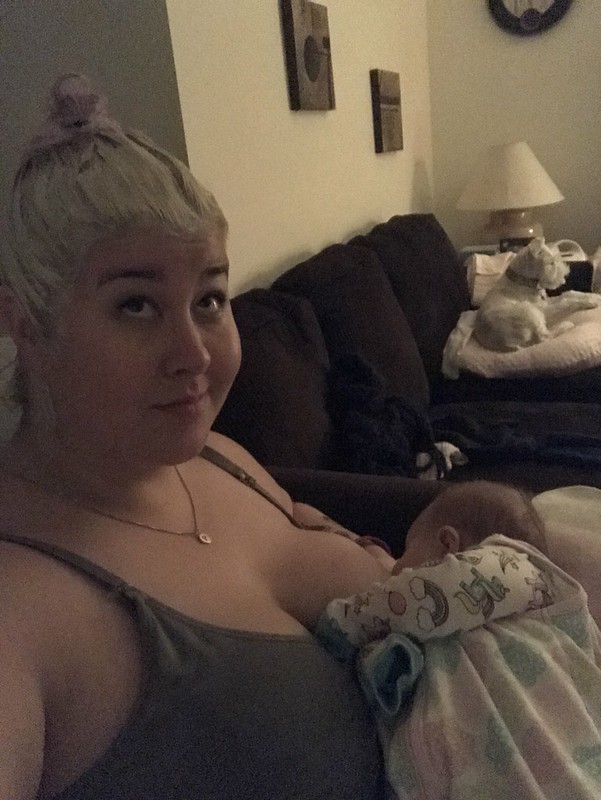 Sooooo yeah, this resulted in a nice bleachy nursing session and lots of prayers that all of my hair wouldn’t fall out from bleaching too long, lol. Thankfully, I managed to get her to go back down pretty much right away after she was done, and thus escaped with hair unscathed and repurplefied! 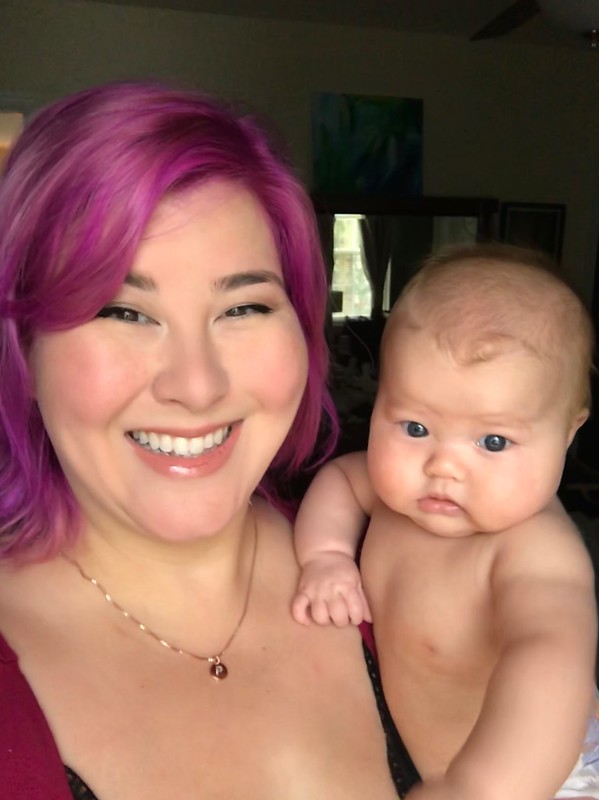 And so I was able to look presentably vibrant (and very easy to spot) for my #momsquad coffee date the next morning! Now that Penelope and I are nice and comfy with each other, I’ve been really eager to meet other mamas in the area with similarly-aged kiddos. So being the totally level-headed and not-in-any-way-overzealous person that I am, I joined like, four different new mom Facebook groups and also downloaded the Peanut app (which is literally Tinder for moms, lol). I’ve been fortunate to connect with some lovely ladies and their even lovelier bebes! 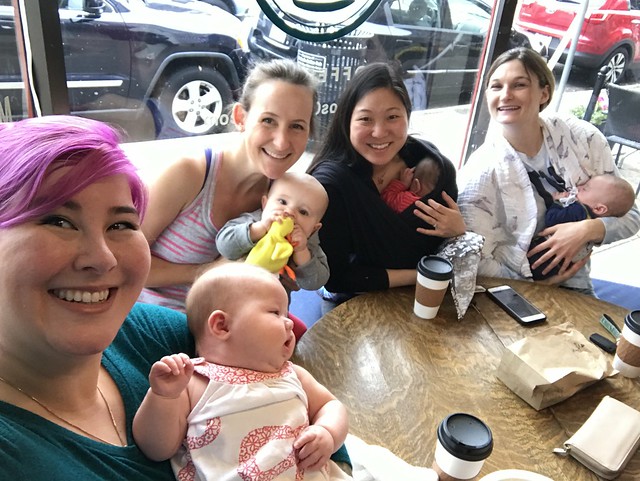 It’s so nice to have other ladies with whom to get together and commiserate over developmental milestones, spit up, blowouts, and sleepless nights, hehe. Most of my friends’ babies are at least 8 – 10 months older than Penny, and right now the age difference of even a few months makes a huge difference in the whole parenthood experience. So while by this time next year, Penny and my friends’ babes all might be able to play together, it’s especially wonderful to have found some new mama friends with birthdays close to Penny’s — since they’re going through literally the exact same things as us. 🙂 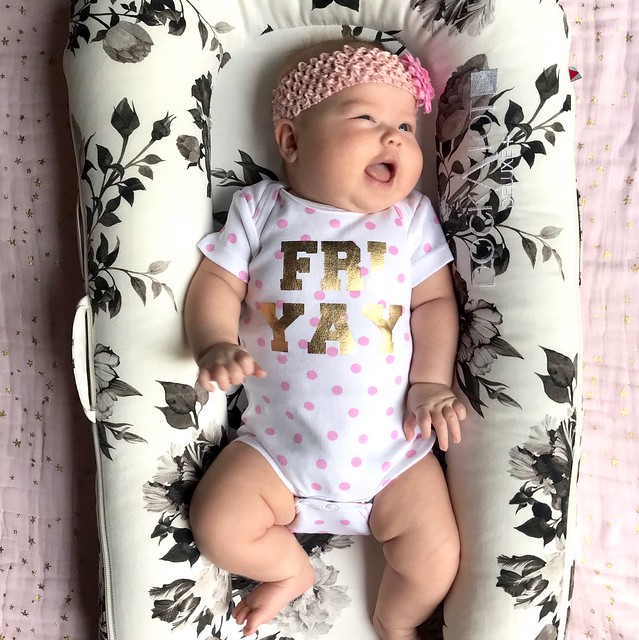 On Friday, I met up with my friend Vicky for coffee in the morning. Mayhaps you are starting to see a pattern here: COFFEE. IS. LIFE. I’ve always enjoyed coffee, but was never really a habitual drinker. Didn’t need my daily cup of joe to get through the morning or anything like that. But now? HAAAAA! You should see the amount of stars I’ve racked up on my Starbucks rewards account. Lorelai Gilmore would be so proud. 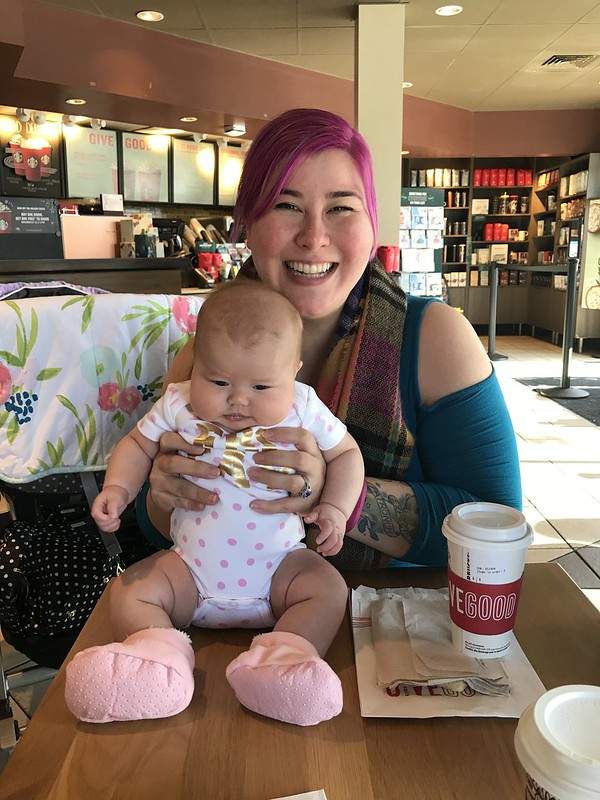 And after yet another successful coffee date, Sean’s mom came by for a visit! Not only did she bring a delicious spread for lunch (homemade chicken pot pies!), but she also watched Penny for a stretch while I took a glorious and much-needed nap. Fri-yay indeed! 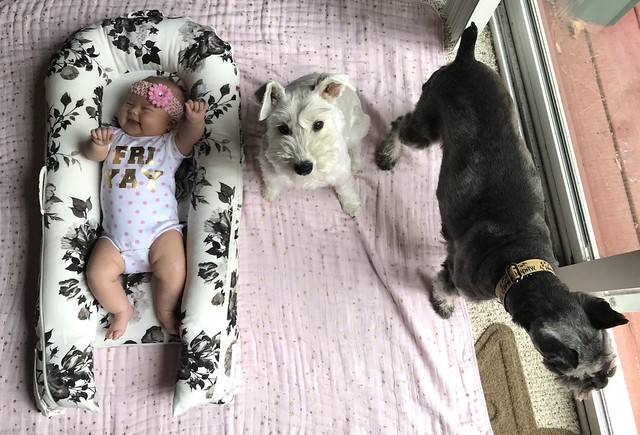 Which brings us to Saturday! We were invited to my coworker’s daughter’s first birthday party and were super excited to have Penny experience her first party! Naturally, she slept terribly the night before (go figure), so we got a pretty late start to the day. When I eventually had to jump in the shower, I asked Sean to get Penny dressed and returned to this bit of fashion-forwardness: 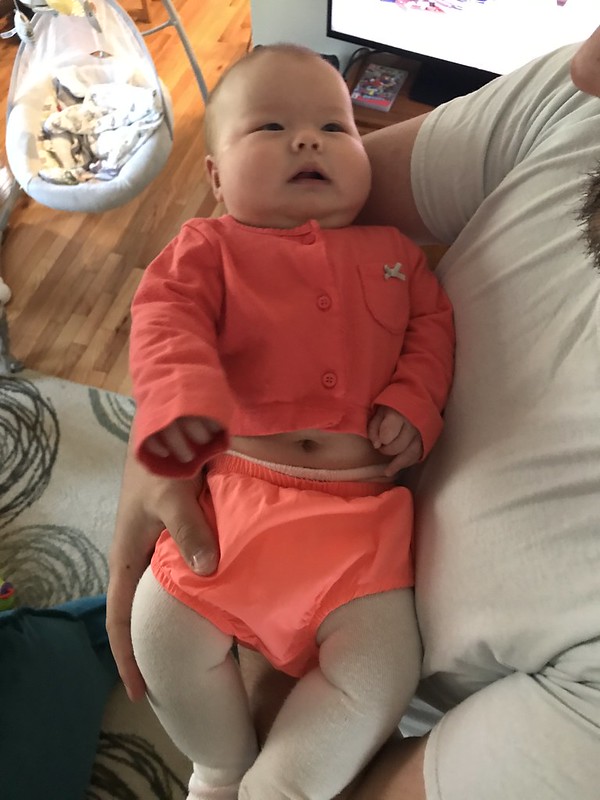 Bahahahahahaha. He gets major points for matching, but she is 100% missing the actual dress that’s supposed to go under the cardigan and over the bloomers. ::laughing crying emoji:: 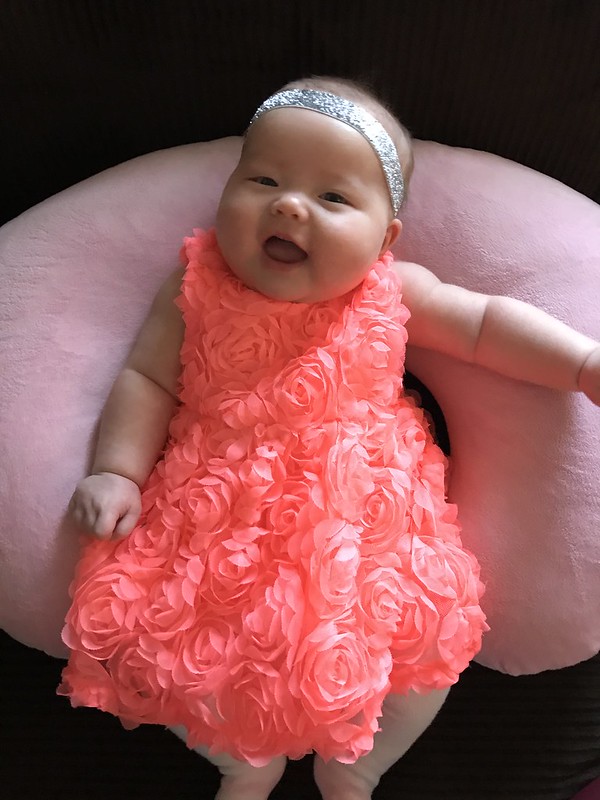 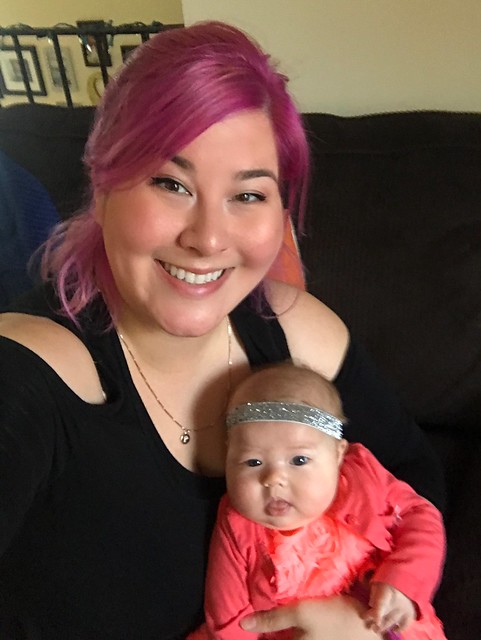 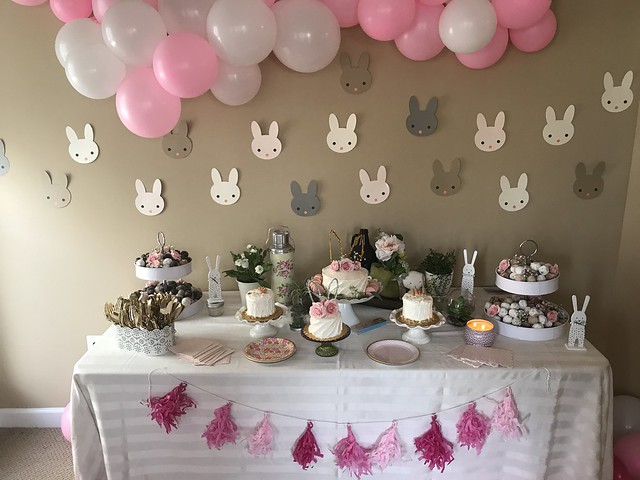 The party was so much fun! There were sooooo many kiddos and babies there, and it was really fun for Sean and me to see what our future holds, hehe. My fab coworker Kimberly did an amazing job with the theme, decor, and food (there was a Chipotle bar!!), and gave me serious goals for next August when we’ll be going through the same thing, hehe. Oh man, I’m getting emotional just thinking about that. I know that sounds ridiculous since it’s so far away, but I mean, I already can’t believe Penny will be 11 weeks on Wednesday! ::sniff:: 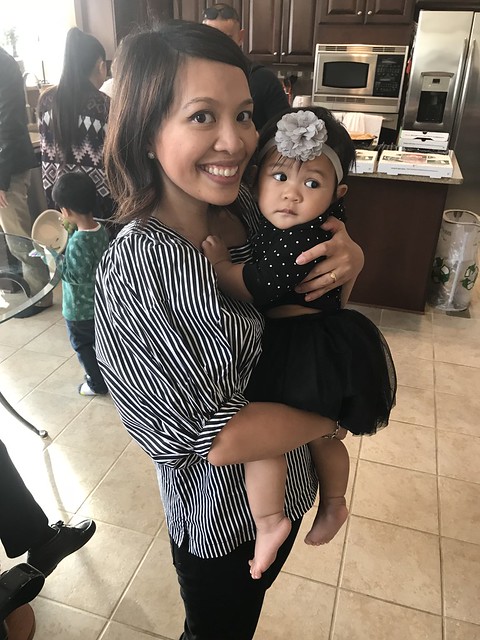 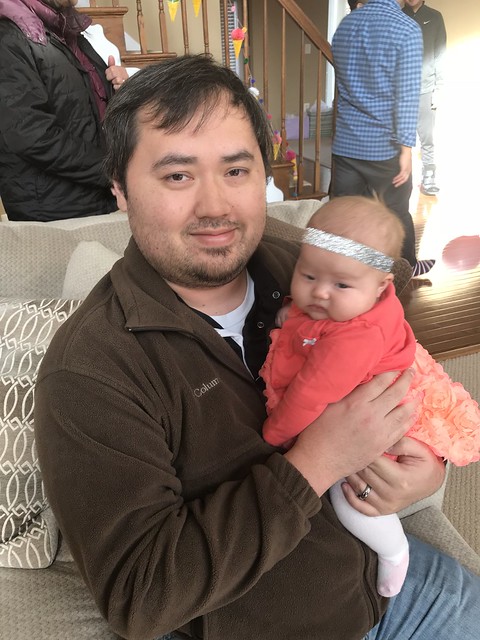 Kimberly also arranged to have a Tunes 4 Tots session at the party, so Penny also got to experience her first music class! I can’t wait ’til she is, y’know, able to like, sit up and clap her hands and actually do stuff. But even though she was literally just sitting up in my lap watching it all unfold, I like to think she was having a grand ol’ time, hehe. 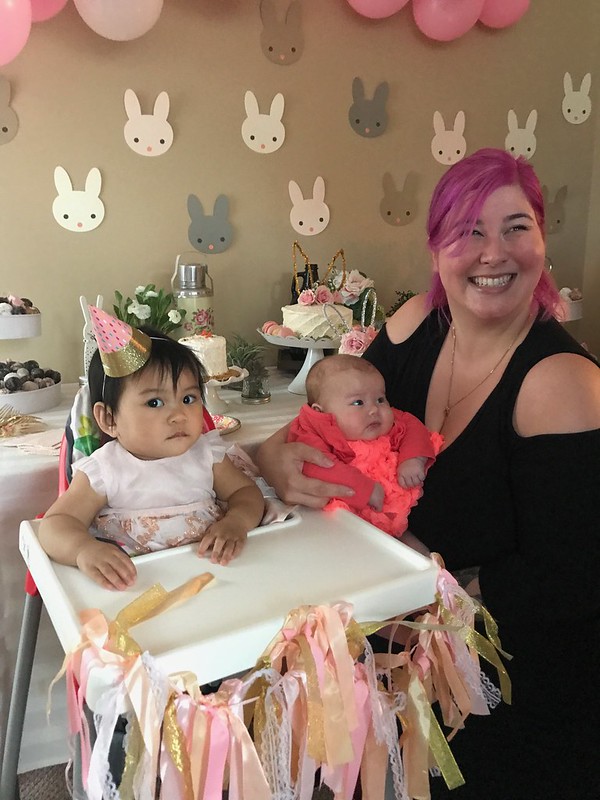 Later that night, Penny and I met up with one of my oldest friends, Megan. We’ve been friends since meeting in Taiwan in 2001, where we both attended high school! 16 years of friendship and counting…! Not that that makes me feel old or anything, heh. 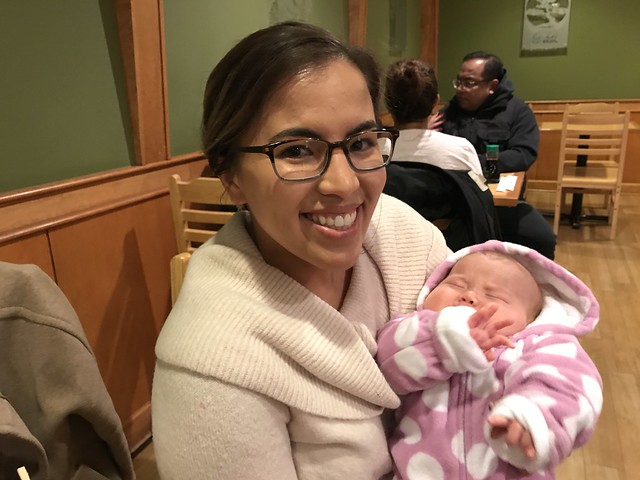 After dinner, I dropped by my parents’ house, as another one of my uncles was visiting and wanted to meet Penny (she is far more popular that I could ever be!). This turned out to be a great thing, because while I was also supposed to see my parents again the next day, my mom came down with something so it didn’t work out.

They had originally offered to babysit for Sean and me while we went to a show, but since that didn’t happen we ended up having a nice lazy Sunday at home. TBH, it was really nice. I love having a reason to get out of the house (and I still did end up taking Penny on an errand run… and to get more coffee, hehe), but all the social engagements, coupled with the fact that Penny’s sleep has continued to be very unpredictable, did leave me feeling pretty drained. 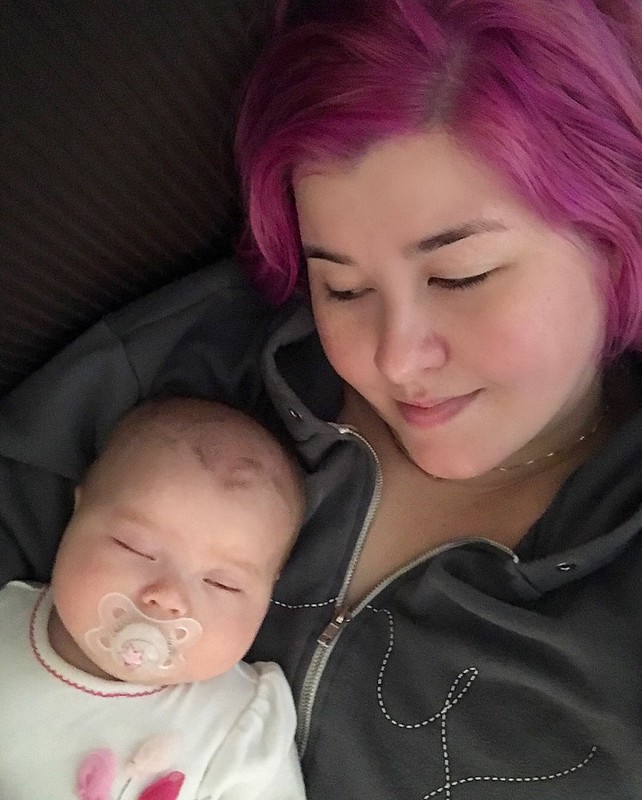 So Sean, Penny, the dogs, and I all got to enjoy being home together — cooking (Sean), playing (Penny and the dogs), napping (everyone but me ::laugh/cry::), and taking care of stuff around the house (meeeeeee, heh.) 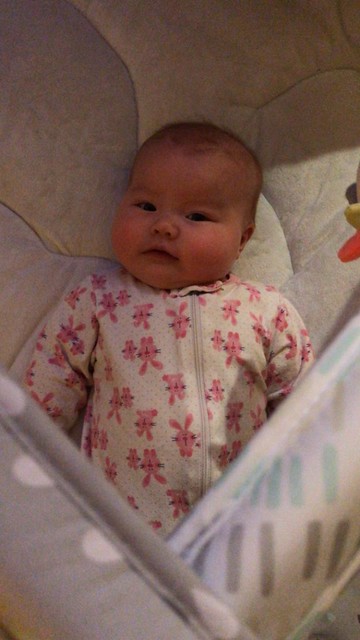 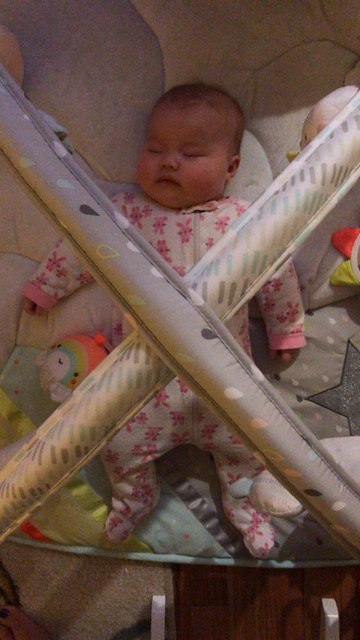 Which catches us back up to today! We’ve got lots of additional plans for fun this week, including our first Crybaby Matinee, more mommy dates, and a trip this weekend — whew! I’m also hoping that I’ll be able to get another one of the (many) parenthood posts I would like to write up this week, but guff, finding time to blog really is a challenge these days. I don’t know how actual mommy bloggers do it!