You take one look at the title of this dish and you say, “HOW much garlic?! Hey, I just met you and This is crazy!” It sounds intimidating. It sounds strange. But just bear with me, and I promise you will NOT be disappointed. 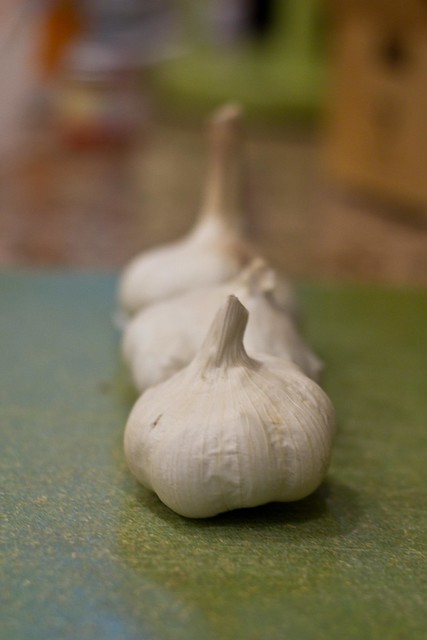 One of the very first things I ever saw on the Food Network was the episode of Barefoot Contessa where Ina Garten made Chicken with Forty Cloves of Garlic. It was the episode that first made me crave owning a dutch oven (a mission that was quite recently accomplished, thanks to my generous boyfriend) and the first recipe that made me actually WANT to cook with alcohol. 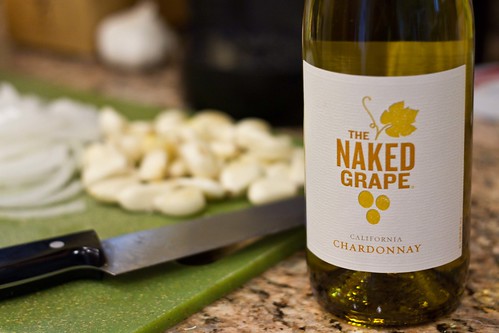 I know that forty cloves sounds like a lot of garlic. I mean, it is. But in reality, I think this was really more like 32 cloves, and either way, it’s the least garlicky-tasting garlic dish you’ll ever taste. It’s not spicy, it’s not overpowering, it’s just… delicious. Like, I-want-to-eat-the-leftovers-for-breakfast delicious. 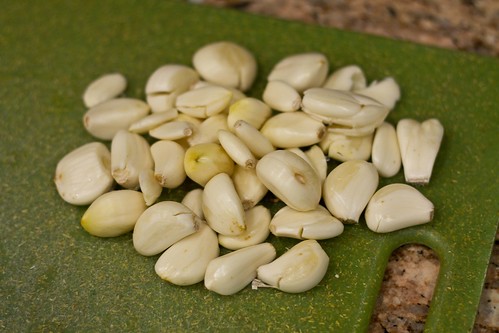 I did make a few adjustments to Ms. Garten’s original recipe, of course. First of all, her recipe called for cognac. What kind of twenty-something just happens to have cognac laying around? Pass. Secondly, I absconded with the heavy cream that her recipe calls for, and thickened the sauce with just a little bit of flour near the end. Thirdly, I added onion where there was none, so that I can at least pretend there’s some sort of vegetable nutrition involved here. And lastly, her recipe calls for utilizing an entire, skin-on chicken, which I was not willing to butcher for the sake of this dish. So I went with a package of boneless, skinless chicken thighs instead! No bones to eat around, nixing the skin also meant sparing myself a few more measly calories, and it was just so, so, so much easier.

Did I mention how EASY this dish is? The most labor-intensive part is peeling the garlic cloves (I smash them down with the flat side of my knife to pop them open, but use whatever method you prefer), and if you were feeling particularly lazy, you can even buy those huge jars of pre-peeled whole garlic cloves these days. No excuses. 🙂 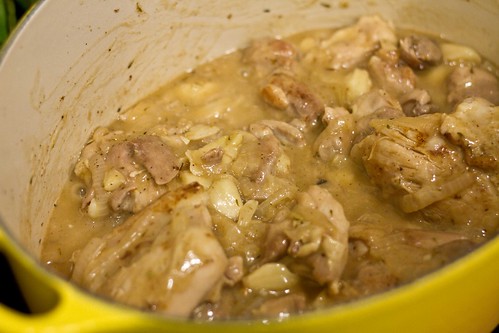 This would be a great meal to make for a family dinner night, or for a dinner party if you’re looking to impress. I mean, c’mon, even the name sounds fancy, doesn’t it? The end result is a savory, succulent, and moist chicken with a creamy (but without cream!) sauce to serve over it. It’s boyfriend-approved (the true test: he went back for seconds!) and is a real winner. And as a bonus, I can tell you that this dish will NOT give you garlic breath when you’ve finished demolishing it either. Win-win-win. 😉 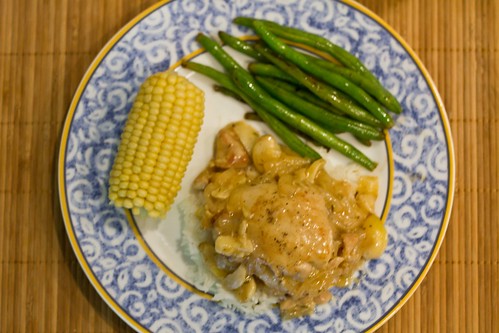 You could try making this recipe with chicken breast if you wanted to cut down on the fat even more, but I highly doubt it would turn out quite as good. Chicken breast just doesn’t hold up well under low-and-slow cooking, you know?

I served it up over rice last night, with green beans and corn on the cob as the sides. It would be great over any grain of your choice — rice, barley, quinoa — or with a side of pasta! Of course, it’s definitely substantial (and delicious!) enough to stand alone, too. Maybe just add a nice toasted piece of bread on the side to mop up all the leftover sauce? Mmmm. 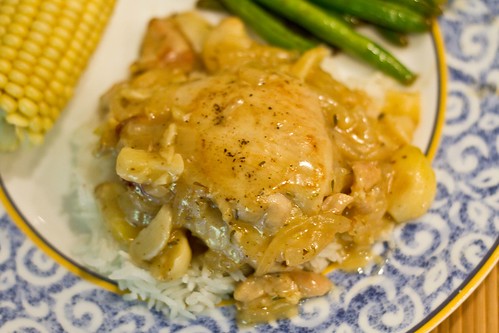 Chicken with Forty Cloves of Garlic
Print this recipe!

Inspired by this recipe.

Don’t be taken aback by the name: this succulent, savory dish is not as garlicky as you might think! By allowing the garlic to cook low and slow, it becomes soft, sweet, and tastes simply heavenly. Enjoy over rice, noodles, or on its own!

1. Heat butter and oil in a large dutch oven or large pot to medium-high heat. Season chicken thighs with salt and pepper, then sear in the pot for 3 – 4 minutes, allowing it to brown on both sides. Remove chicken and put it on a plate.

2. Reduce heat to medium and add whole garlic cloves and sliced onion. Season with salt, pepper, and thyme and cook until garlic has begun to get soft and onions are beginning to turn translucent, about 5 – 7 minutes. Add white wine and deglaze the pot, making sure to scrape up all the brown bits on the bottom of the pan. Add the chicken back into the pot, reduce heat to low-medium, and cover with lid. Cook for additional 18 to 20 minutes. 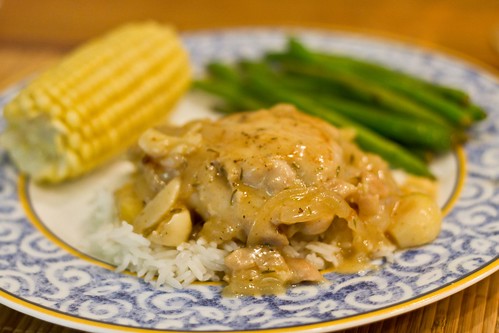