I’d say “Guess what I did last night?” but I’m thinking the title of this post kinda gives it away, huh? 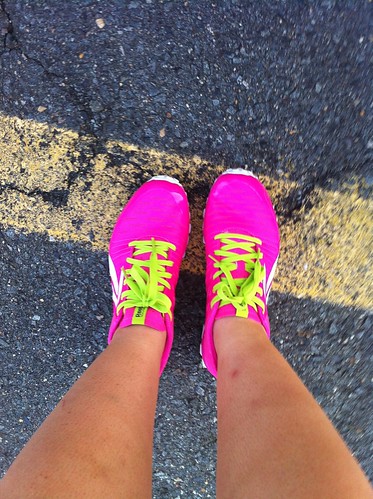 Yep, a mere six days after my first CrossFit experience, I made my (not so) victorious return to the “box”! The amazing people at CrossFit Annandale are generously providing me with a scholarship (free attendance) in exchange for me sharing my workout experiences, so I figured it was time to get back in the figurative saddle. 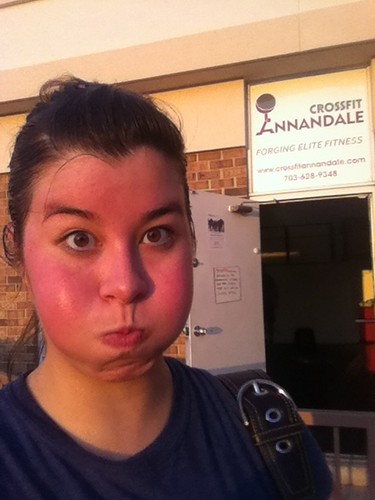 That picture just about sums it up. On the bright side, I felt roughly 83% less throwy-uppy after this time. That means I’m already improving, right? Hahahaha. 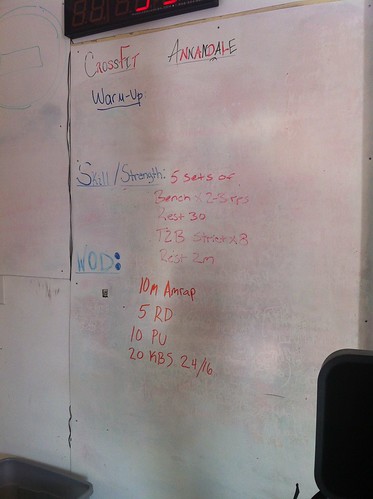 I think I ended up picking a really good class to make my second one, because the types of moves we did and the muscle areas we targeted were completely different than last time. I can see why CrossFitters claim that they never get bored doing this kind of workout, for sure. Yesterday’s workout was much more focused on arms, shoulders, and back, whereas last week’s was all about the quads and glutes.

We started with a warm up outside in the parking lot where we did high knees and butt kicks, then some walking stretches, then a quick round of push ups (on knees, for me) and squats (I’m getting better at these already!). Then we headed inside for the regular workout part, where we alternated between bench pressing and “toes to bar” crunches. Sorry there aren’t any actual workout photos, but I felt a little sketchball asking for someone to take pics of me again, haha.

Since I have never bench-pressed anything in my life (and it was only my 2nd time and all), Coach Tony spent a lot of time taking me through the proper way to do it. I gotta say, I’m really impressed with the amount of personal attention you get at CrossFit. I know that it’s probably different for me because I’m still such a n00b and need help with, um, everything, but still. I think I would liken the experience to group personal training.

Anyway, for the bench press I started with just the 45-lb bar, then added 10 lbs of weight after my first set. I was VERY wobbly, since I’m not used to having to hold up something that can tilt above me, but I think I have the basic idea down for sure. I really need to work on my breathing rhythm most, I think, since exhaling at the wrong time had a definite effect on my ability to push the bar back up.

The toes to bar things were NOT something I could do, however. They involved dangling from a pull-up bar and lifting your feet straight up until they touch the bar where your hands are. Er, yeah. I couldn’t even do the whole dangling from the bar part. So Tony had me do leg lifts on the ground instead, which works the same lower abdominal muscles (of which I have roughly zero, haha). At least I’ve done those before!

After a few sets of those two moves, it was time to move onto the Workout of the Day (WOD). Yesterday’s WOD was an “AMRAP”, which stands for “As Many Reps As Possible.” In essence, we had 10 minutes to cycle through the 3 different sections of the WOD as many times as we could manage.

The first part was to do 5 ring dips. This involves hoisting yourself up on dangling rings, dipping your body weight, and pulling yourself back up. Because my upper arm strength is about the same as my core strength (I’m weeeeeak!), I did dips on a bench instead, and did twice as many (10).

The second part was to do 10 pull ups. Again, can’t do them (yet!) so I did seated pull-ups using the rings that I didn’t use for the actual ring dips (confused yet? Hahaha). I also only had to do 5, which was good, because they were still really hard.

Finally, the last part was to do kettlebell swings! I’ve been seeing/hearing about kettlebells for a long time, so I was actually excited to get to do this. Coach Tony helped me out with my form for a while, and I did a lighter weight than the other girls (16 pounds instead of 35), but I did the regular number of reps (20).

So, ring dips, pull ups, kettlebell swings, repeat! I got through my modified-for-a-weakling cycle 4 times, plus an additional 5 shoulder dips. Whoo! Unlike last time, however, where I was able to do the same exercises as everyone just with lower weight, I did feel kind of lame having to modify so many moves, and by so much. I mean, I know that I’ll get there eventually, and it’s not like anybody made me feel bad about it (other than myself), but still. I guess that’s just something I’ll have to get over, eh? 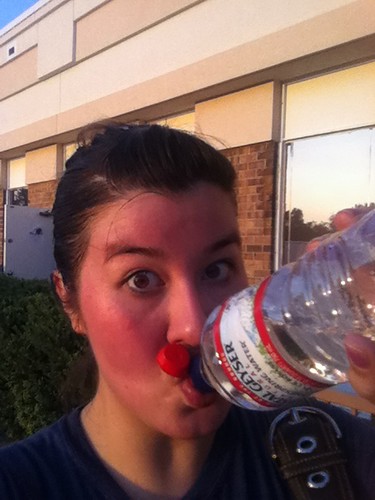 After the WOD was over, another coach helped me with stretching and mobility exercises for a good 15 minutes, which was awesome. He showed me how to foam roll my lats, do shoulder mobility using a long skinny PVC pipe, and use a lacrosse ball for my back. I think that this was crucial in me being less sore today. I mean, don’t get me wrong, I’m still sore (which means I’ll be even MORE sore tomorrow!), but it’s not as bad as last time AT ALL. And again, this workout didn’t really make me nauseous or anything either. Hopefully that doesn’t mean I didn’t put forth the same amount of effort though!

We’ll have to see how long it takes me to fully recover this time, haha. ‘Til then, CrossFit!