Wellps, the high of celebrating my big 3-0 has definitely faded, as the past week has been a bit of a tough one for me. Emotionally speaking, that is. If you follow me on Instagram, you might have seen some of my posts about my milk supply plummeting in recent weeks. I’m not sure if it’s because as work has gotten busier I’ve been less able to breastfeed Penny during the day anymore, if it’s because I started my weight loss efforts back up, if it’s because I’ve been sick lately, or if it’s because I’m just not responding to my breastpump the way I used to — probably a combination of all of the above, actually — but my milk supply has been slowly decreasing since shortly after I returned from my Atlanta visit last month. 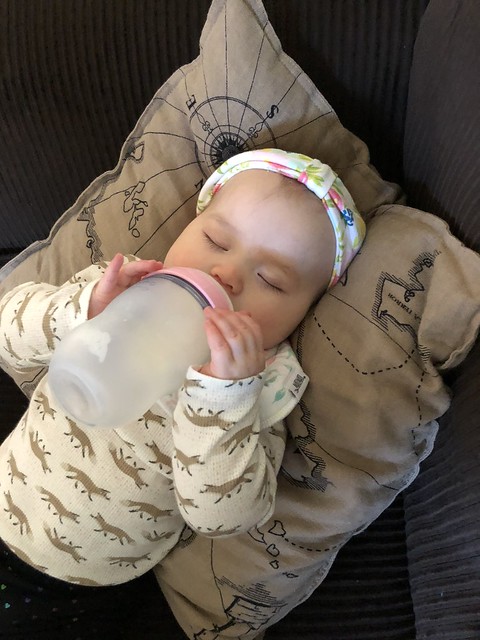 Penny hasn’t acted fussy or like she’s still hungry after nursing or anything, so I wasn’t really that concerned about it… until a couple weeks ago when it hit me that Penny is going to be starting daycare a couple of days a week (her first day is today! Wah!), and I need to have enough milk to send with her every day. And of course, along with my milk production slowing down, Penny’s appetite’s also been ramping up! She used to drink 3 – 4 ounces of milk at a time from the bottle, but now she’ll easily down 5 – 6. 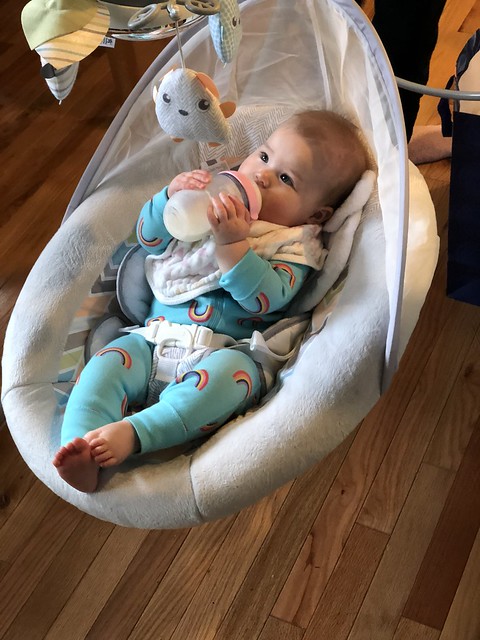 Even her increased intake wouldn’t really have been an issue before, since pumping sessions used to net me 5 – 6 ounces of milk. But lately? It’s been a struggle to get more than 2 to 2.5 ounces. Cue me suddenly freaking out about not being able to keep up with her anymore and scrambling to get my milk supply back up.

And it’s just, you know, nursing… pumping… feeding your baby… it’s all so very emotional. I fully recognize how fortunate I’ve been to have had almost 8 strong months of breastfeeding already — not having it hurt, not having latch issues, no big production issues until now. But even with it having been on the easier side for me, I’ve still had many moments of self-doubt and mental anguish — the slightest dip in supply, the slightest amount of fussiness at the breast, and suddenly I found myself second-guessing everything. Why wouldn’t she nurse? Was she getting enough to eat? Was my milk of high-enough fat content and quality? Was she gaining enough weight? I mean, when it comes to your child’s sustenance, over-analyzation is simply second-nature.

And that kind of thinking happened before I ever even had a true supply dip that lasted longer than, like, a day, and with my 80th percentile, very healthy, little chunkster of a baby. So if it was like that before, you can imagine what it’s been like in my head the past couple of weeks. 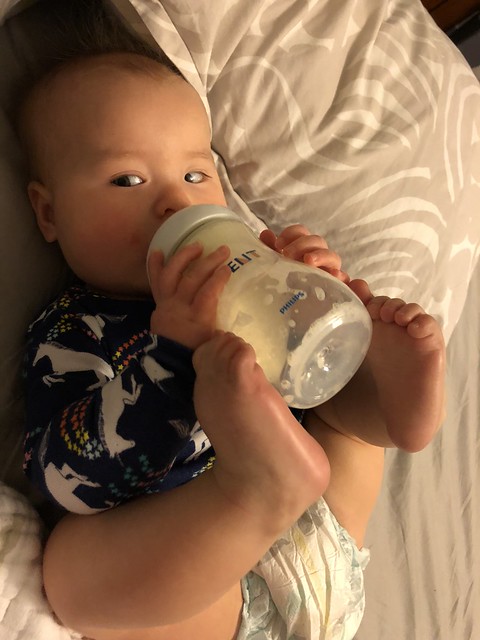 There’s just so much emotion tied up in feeding your baby (no matter how you choose to do it!) and for me, this idea that my body is suddenly not doing what I want it to anymore has been tough. I, of course, have absolutely nothing against formula, and we have already started supplementing, but it’s important to me to try and get my supply back up if I can. Tbh, I really appreciate the convenience and ease that formula offers (just don’t appreciate the cost, lol), but my fear is that my supply will continue to decrease to the point of going away completely if I start to rely on formula too heavily. And I cherish my nursing relationship with Penny so much, I’m definitely not ready to let that go yet. So life lately for me has looked a whoooole lot like this:

Adding extra pumping sessions, trying to nurse in distraction-free environments, lots of Mother’s Milk tea, staying hydrated, taking supplements, power pumping, replacing parts on my pump, examining my flange sizes, comparing my yield from my home pump (Spectra S2) to the pump we have at the office (Medela Symphony)… phew. I mean, you name it, I’m trying it.

And hey, for what it’s worth, it seems to be paying off! I’m seeing a small increase to closer to 3 oz and even have gotten 4 ounces a couple of times now. But I’m having to pump for a much longer amount of time to get it, and it’s still not quite enough for my hungry girl… plus, as you can probably imagine, it’s been very draining both physically and emotionally. So that’s played a big part in me doing a bit of doldrum-dwelling lately. Well, that, plus the fact that I’m still fighting this furshlugginer cold… and then there’s the whole Penny-starting-daycare thing, which I’m obviously being crazy about, lol.

I know that it’s probably silly to make such a big deal out of her starting daycare. I mean, she’s almost eight months old, and she’s only going a couple of days a week (my parents and MIL each still have their day with her, and we also still have our nanny one day a week right now as we transition). Moreover, most working parents that I know have had their kids in daycare — full-time — since they were like, 12 weeks old. I know. But I can’t help it. This is still a big change for me, and you can’t deny that there is a very real difference between having your baby taken care of in your own home versus dropping her off somewhere. 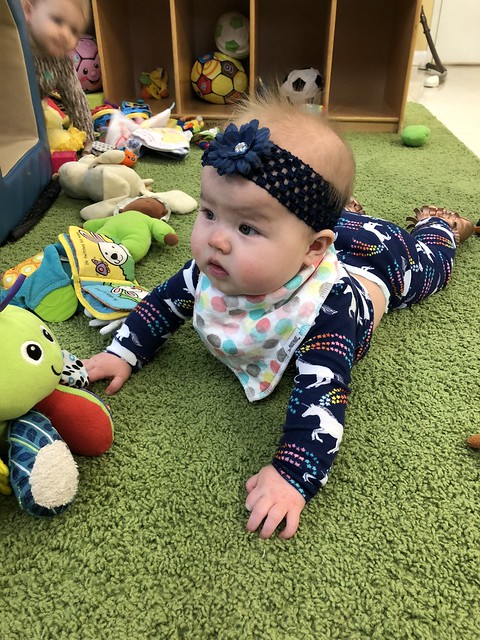 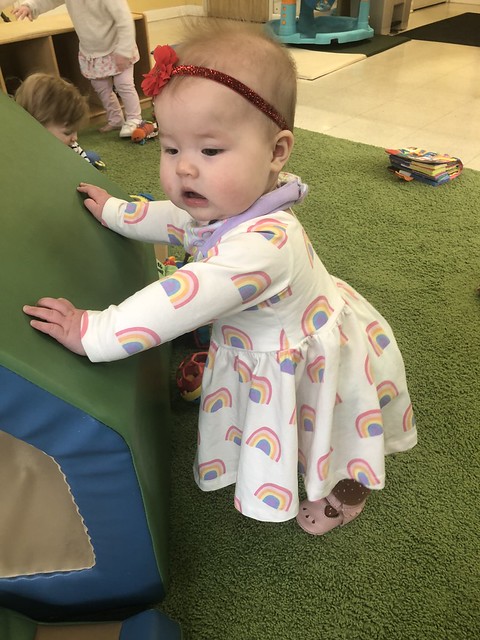 But, that being said, I realize this is just my own baggage, and that Penny’s probably going to love it there. I was able to spend some time with her at the daycare a couple of times over the past week to help her get acclimated, and she did so great. She really loves watching the other kids and I think it’ll be really wonderful for her to have even more varied social interaction than she does now. So I try to remind myself of that, along with the fact that we looked at many daycares and chose this one for a reason. And also that I’m an insane person who literally still cries when I watch The Greatest Showman even though last night was my 706th viewing sooooo I should probably take everything I feel with a grain of salt. 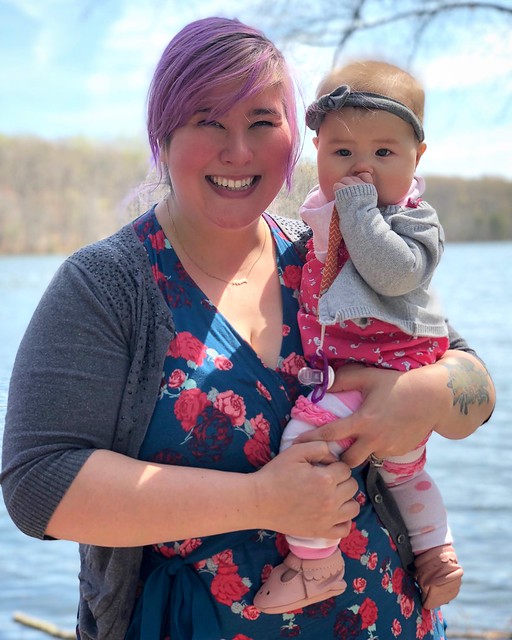 ANYWAY. So that this post isn’t all me complaining (just, you know, mostly complaining), I’ll give a quick update on how my healthy living stuff (I’m hesitant to refer to it as my weight loss efforts, since that’s not really what it’s supposed to be about, but I digress) has been going. In betterish news, kind of, I’ve been making good on my endeavors to move more and clean my eating back up. I actually am back down a few pounds, although I’m officially moving weight loss back to the backburner, as even though I didn’t set out to specifically count and cut my calories, I definitely was doing so and feel that probably has been another contributing factor to my supply dip. 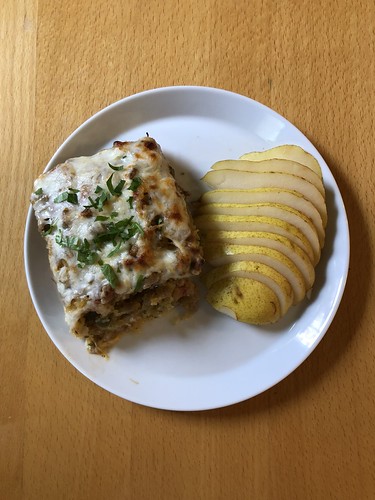 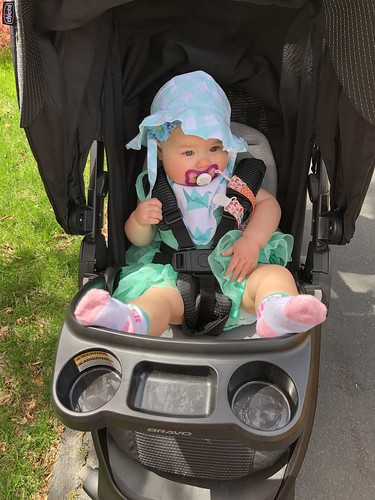 I’ve been trying to take advantage of the nice weather we’ve been having lately (as well as fight against my innate laziness) and get Penny outside and moving around more often. On Sunday I went for an awesome walk around Burke Lake with some of the wonderful mommy friends I’ve made since Penny was born. There really is nothing like being with other mamas who truly understand firsthand being obsessed with your baby, hehe. 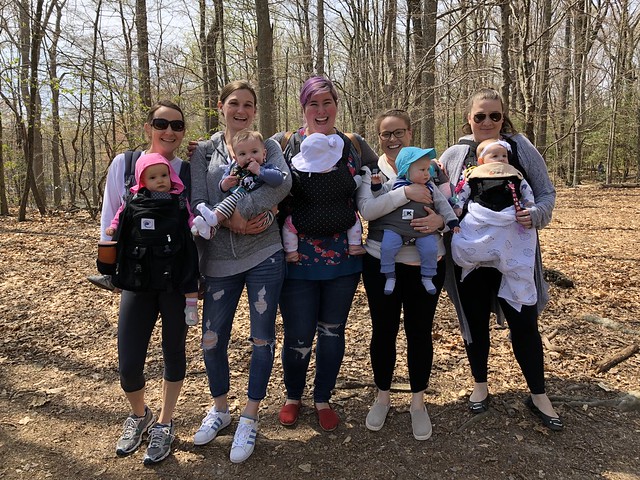 Sadly, today is supposed to be overcast, rainy, and dreary… just like my mood (ha!) so it’s looking like I’ll be a bit of a hermit today. The good news on that front is that hopefully that just means I will be RIDONKULOUSLY CRAZY PRODUCTIVE since Penny’s going to be at daycare anyway, and I have ugh soooooo much to do. At least that should hopefully keep me nice and distracted instead of staring with baited breath at my phone for photo updates from the daycare? Hahaha, here’s to hoping, at any rate!

And just in case all of my whining throughout this post has turned you off of reading this blog ever again, here’s my argument for you to keep sticking around: just look at this picture of Penny eating eggs. 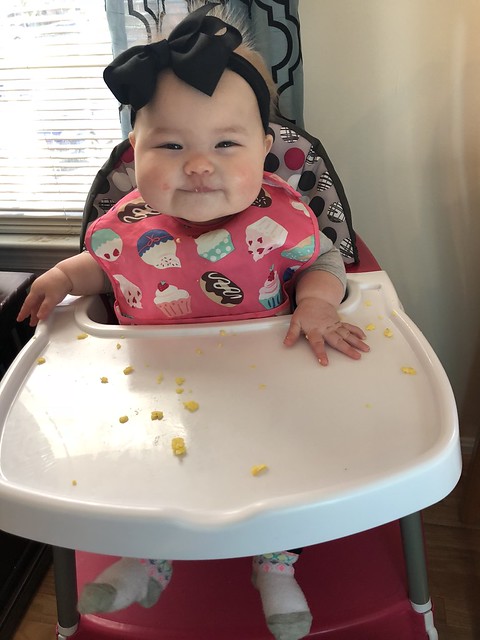