32 weeks! This is the point where it simultaneously feels like the end is nigh and I still have miles to go. I cannot imagine how my stomach is going to get any bigger, and yet I still have almost 8 weeks to go! Yipes.

I had my 32 week OB checkup yesterday, and everything looks great. My blood pressure reading was very good (yay!), and I’m measuring right on track growth-wise. We had a crazy hot and humid week last week, so I’m still dealing with some swelling from that, but she said that swelling, along with my other symptoms, are all very normal. Hooray for normal! 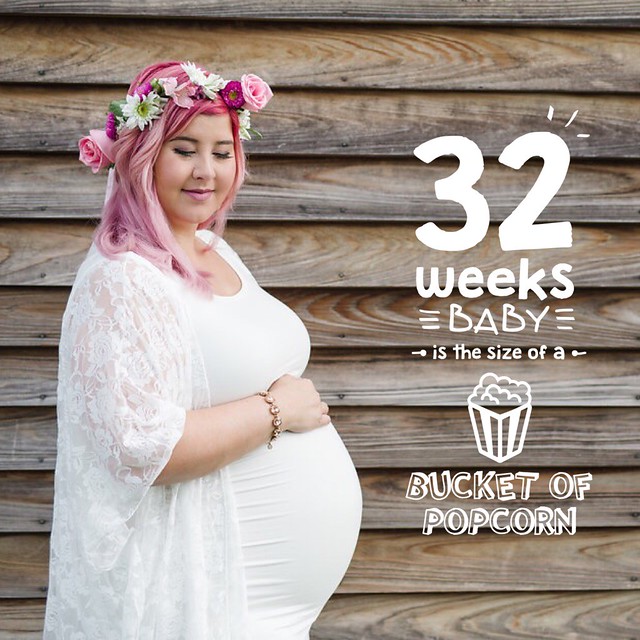 Foxlet’s Size: At 32 weeks, Baby Foxlet is the size of a jicama, a squash, or a bucket of popcorn… and weighs almost 4 pounds!

Weight: Hip, hip, huzzah! I’ve officially gotten back to my initial, pre-pregnancy (or, rather, early pregnancy) weight! And it only took, like, what, 7 months? Ha. While emotionally, it’s still hard for me to consider growing numbers on the scale a positive thing, I recognize that weight gain at this point is super healthy and necessary. After all, she’s gaining weight every week, too! My baby book says she could gain as much as a half a pound per week moving forward, so I should expect to also gain about a pound per week.

Symptoms: Blah, blah, blah, more complaining. I know you’re all probably sick of hearing about it by now — I sure am! But whatever, man, people deserve to know what they’re in for, haha. I can confirm the third trimester really ain’t the bee’s knees (and everyone even warned me ahead of time that it would be tough, especially in the summer!)

As mentioned, I’ve been having a bit of swelling in my hands and feet due to the heat, but my main symptoms are unfortunately still pain-related: tailbone pain, back pain, and continued SPD/pelvic pain. Heartburn is still pretty bad, unfortunately, and I still have that sharp stabby rib pain flare up (only on my right side). I suspect it may be related to the heartburn, or maybe to gas buildup or something, as it’s intermittent and seems to activate/resolve depending on my body position.

Emotions: Surprisingly steady this week. I mean, I still cry at the drop of the hat but I don’t think anything particularly ridiculous has set me off in the past 7 days at least? Or maybe it has, but I’ve just become so accustomed to it at this point that I don’t even take notice anymore, hahahaha.

Cravings/Aversions: I had the most intense craving for a Costco chicken pot pie yesterday. It did not get resolved because A) the craving came during rush hour and B) even if I had braved traffic (or, rather, convinced Sean to do it for me, hehe), it would have taken like 90 minutes to cook. But I have a feeling I’ll be indulging in said craving today because those pot pies are damn good!

Sleep: Terrible. Just, terrible. Changing positions in bed is quite painful if I’ve been laying on my side for a long time, if I try to sleep propped up it kills my tailbone, and regardless of what position I’m finally able to fall asleep in, I wake up every few hours to use the bathroom anyway and have to start all over again. Sleep is no longer my favorite.

Purchases: Picked up a bunch of the remaining things on my registry, so Baby Foxlet’s nursery is really almost 100% done! Just waiting on a replacement part for the bookcase I ordered, and then Sean has to mount something on the wall for me and it’ll be complete! Can’t wait to show off the full, finished thing to you guys.

Looking forward to… CM Week — our annual work conference at Yelp HQ in San Francisco. I fly out Sunday, and for now I’m going to be optimistic and hope that the joy of seeing my coworkers and being busy with work stuff will be a nice distraction from all the pregnancy aches and pains. A few of my coworkers are also pregnant right now, so I think it’ll be fun for us to see each other for that reason as well. And at least the weather will probably feel great in the Bay Area! Tends to be MUCH cooler there than it is here at this time of year, hehe.

NOT looking forward to… getting on a plane this Sunday. My OB cleared me for travel at my appointment yesterday, assuring me that there are literally no signs or indications at all to think I will go into premature labor or have any reason not to fly.

That said, I’m sure I’ll still be very uncomfortable and my feet will probably swell up on the flight. I’m flying Virgin America, so their seats tend to be on the somewhat roomier side, and they have the nice screens that let you order drinks and food and stuff really easily at least. My plan is to wear my compression socks on the plane, drink tons of water, and to walk up and down the full length of the plane at least once an hour. Fingers crossed!