Oh man, these past couple of weeks have been seriously eventful! There’s so much to catch up on, I’m not even sure where I should start… but you can bet I’m gonna try.

Well, I guess first off, as you can see I successfully survived my work trip to San Francisco and back! Huzzah! I was dreading the flights, but I ended up having very positive experiences on both flights (well, with one major caveat — but I’ll get to that) and I’m really glad I was able to attend CM Week! It was awesome getting to see all of my coworkers again (I work remotely) and soak in all that Yelpy goodness before I’m off on maternity leave for basically the rest of the year.

Hilariously enough, like four of my colleagues also happen to be pregnant right now, hehe, and we’re all due kind of in the same timeframe! So it was fun getting to swap stories (and commiserate) with them. 🙂 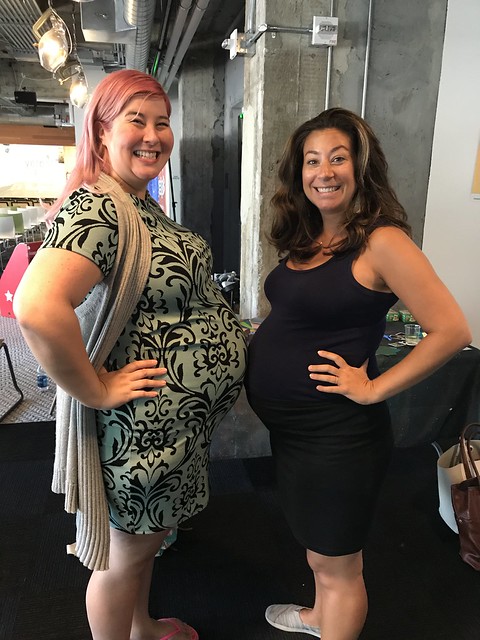 I was pretty proud of myself for how “well” I did while I was out at Yelp HQ. I think I was so excited to see everyone and nicely distracted by the conference itself that I didn’t really feel bogged down by too many of my usual symptoms! That said, I think the travel definitely caught up with me once I returned home. I had been dreading the flights themselves most of all, but I actually ended up getting really lucky with some ideal seating situations — both flights were very full, but I managed to get myself a seat in one of the only rows on the flight out to SFO that didn’t have someone in the middle, and on the flight back to DC, I actually got an upgrade to Economy Plus!

Alas, that good flight karma only went so far, as I had to deal with the incredibly unfortunate and upsetting fact that my laptop was taken from my checked bag on the way out to SF!  I know people say stuff like, “I’d never put anything valuable in my checked bag!” but I guess I was just naive in thinking that checking your bag seems like it would be secure?! I’ve never had anything like this happen before, and honestly couldn’t believe it when I saw it was missing! And to make matters worse, Virgin has been very unhelpful and unresponsive to the situation. For all the good things about flying with them, I have to admit I’m very unimpressed with them in this regard. I got waaaay faster and more satisfying responses from the frickin’ TSA than the actual airline! Ugh.

Anyway, in MUCH happier news, I also have some very exciting news on the family front — as you guys already know, my sister and I have been experiencing our pregnancies together, with her about 5 weeks ahead of me. Well, guess it just goes to show how close I am to the finish line myself, because my new nephew made his debut on Monday!

We are already so in love with the newest addition to our family, and his birth has made me even more excited to meet Baby Foxlet! I was actually texting with my sister when she started to suspect she was going into labor, and so I really felt like I was there with her through most of her experience delivering Alex. Which was both amazing and terrifying considering I’m supposed to go through it myself quite soon, ahahaha, and I’m pretty sure I’m not gonna be as much of a pro as her!

Aaaaand as if all the previously mentioned excitement wasn’t already enough, we also got to celebrate my brother’s “baby” this past weekend!

I think I’ve mentioned before that Ben directed a documentary, and my family attended its DC screening in Georgetown. Getting to see the finished film was so amazing — I’m, of course, a little biased, but I thought it was super well done, so moving, and so incredibly relevant to what’s going on in the world today. I’m so proud of my brother, and can’t wait until the movie is available for you to see as well!

As a fun aside, I also got to bump bellies with another preggo friend some of you know, the wonderful Anne! PREGNANT WOMEN ERRRVERYWHERE! 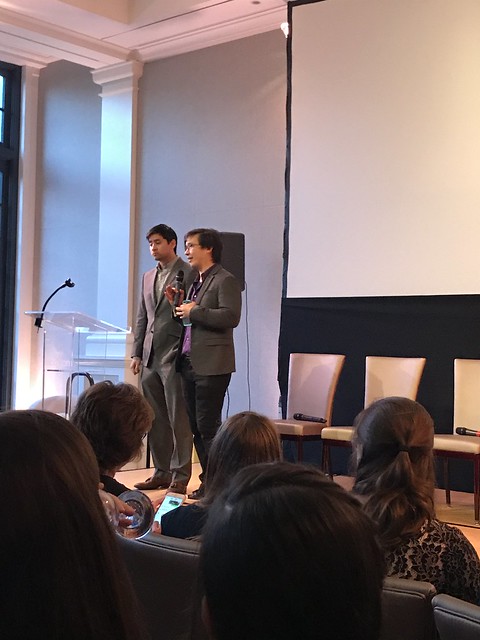 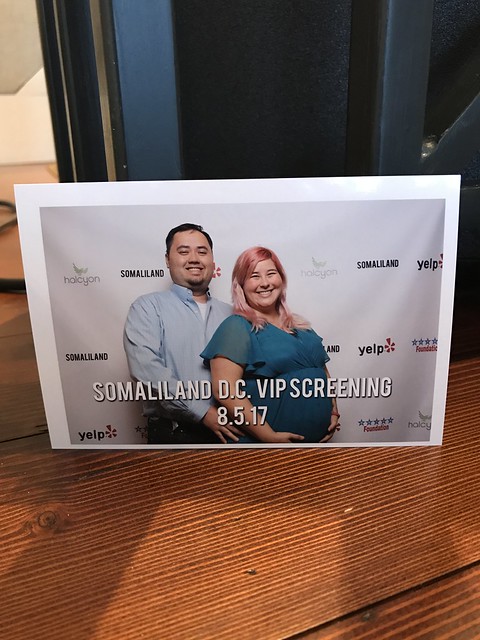 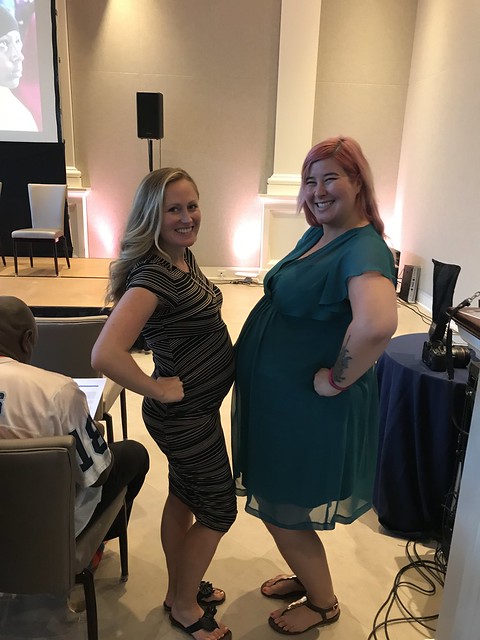 Ahem. Anywayyyy, onto how our little Foxlet is doing, eh? 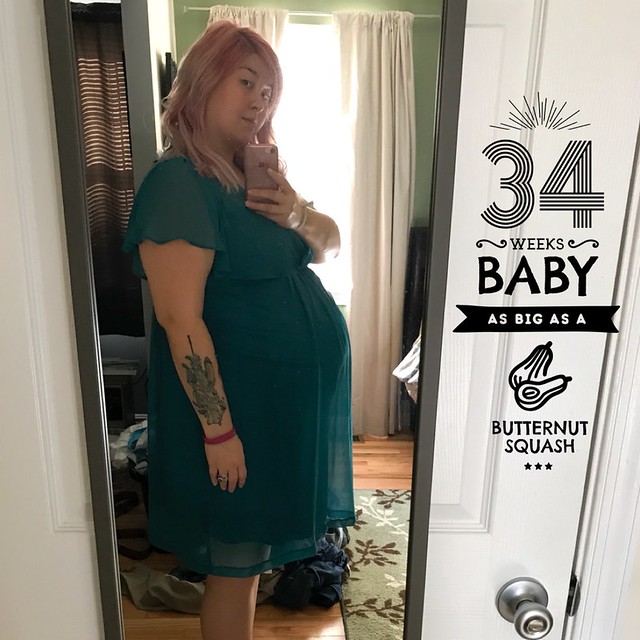 Foxlet’s Size: At 34 weeks, Baby Foxlet is the size of a butternut squash and already weighs around 5 pounds!

Weight: I’ve gained around two pounds since my last weigh-in, I think, but I’ll have my official weight taken at the OB this afternoon so I’ll have a firmer idea then. If you’re just tuning in, that means that overall I’m about 3 pounds up from my pre-pregnancy weight now (after having lost and then re-gained about 12 pounds throughout the first 30-ish weeks.) So either 3 or 15 pounds gained depending on how you look at it, I guess!

Symptoms: Pain, pain, pain. SPD, heartburn, the rib pain thing I mentioned last time, and really bad tailbone pain. The triple threat. The tailbone stuff is the current worst part — it kind of feels like a pinched nerve that just flares up randomly all the time, and I think it’s particularly bad because I don’t feel like I can do that much about it. The size of my belly literally prevents me from being able to do a lot of the stretches and moves that would normally provide some relief.

I got a prenatal massage yesterday that I think helped a bit, and I’ve got a super sexy donut pillow to sit on now (bahaha), but unfortunately I just don’t think I’m going to really feel better until Foxlet vacates her squishy little home, since the pain is stemming from her, um, well, existence putting pressure against my tailbone area in the first place.

Emotions: As bad as I’ve been feeling physically, however, I’m feeling pretty good emotionally! I’m excited to meet her, glad to be finishing up the nursery and prepping the house, and feeling close with my hubby and my family. A few crying fits here and there and like, one or two bouts of irrational anger/annoyance and totally trivial things aside, I think that qualifies as a serious plus here.

Cravings/Aversions: Haven’t really experienced any big aversions lately (yay!) and as for cravings… I guess I’ve been eating a lot of Chick-fil-A lately? Not sure if that’s a real craving or just the result of the long-awaited Burke Chick-fil-A location opening a couple weeks ago, lol. I’ve also been making a lot of egg sandwiches at home, and always seem to want pancakes. Basically just super into breakfast food, heh.

Sleep: UGH SLEEP IS THE WORST. When I can even achieve it, that is. Pregnancy insomnia has totally set in, and makes every night the kind of will-she-won’t-she scenario usually saved for annoyingly frustrating rom-com scenarios. Le sigh. The past couple of nights I haven’t been able to fall asleep until somewhere in the 4 AM-region, and all I can say is that I continue to thank the Lord Almighty that I work from home.

Purchases: Haven’t purchased anything new in a little while, but my baby monitor, which I had ordered back in August, finally arrived! After doing some research and browsing my baby boards, I decided to splurge on the Nanit. It’s meant to work primarily as a birds-eye-view-style sleep monitor, and not only is it a really nice camera, but what sold me was the sleep-tracking and alert technology that comes with its Insights software. You can read more about it on the website, but basically it provides a lot of data about how well your baby slept, number of times she woke up, how long it took her to get to sleep, if/when she was interrupted, etc. 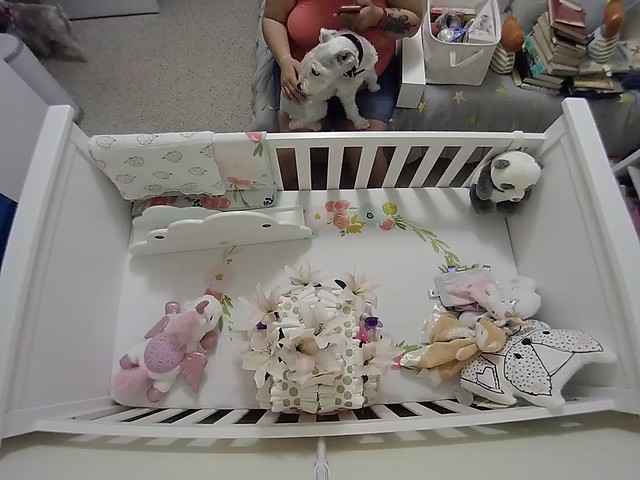 I haven’t activated the tracking software yet since, you know, she isn’t here yet, but I’m hopeful that it will give me a lot of peace of mind about Foxlet’s sleep habits once we transition her to her crib. Of course, that’ll still be a ways off even after she arrives since we’re planning on keeping her in a bassinet in our room for at least the first couple of months. But in the meantime, with the multi-stand attachment, it at least makes for a very nice doggy spy camera, lol. 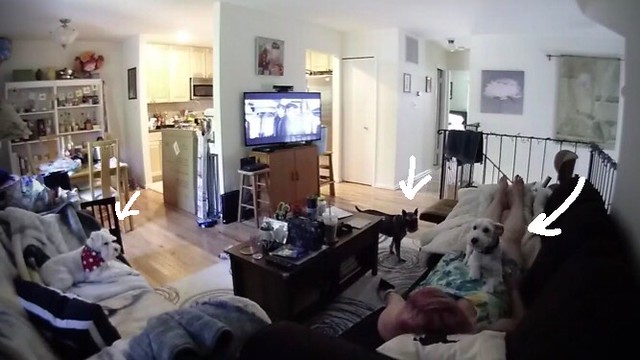 Looking forward to… Sean and I are taking our official birth class this weekend! I’ll be interested to see how useful I find the class, given that I’m a crazy person who has literally been reading pregnancy and baby books since like, before I was even pregnant (lol whoops), but I’m really excited for Sean — and I think he’s excited, too! Things have definitely been getting more and more “real” for him the closer I get to my due date, so it’s nice to be able to do stuff like this to prepare for the baby together.

NOT looking forward to… just like, every day being uncomfortable and in pain. I know it’s so gonna be worth it and I really am in the home stretch but man, they were not kidding when they said that the third trimester is harrrrrrd. But okay, okay, I’m done complaining… for this week. See you next time! 😉