So, last I left you, I had just finished detailing my massively amazing Harry Potter World vacation (with Disney and a cruise and Sean’s birthday and other stuff thrown in there, too). Of course, since it’s been a couple of weeks since returning from said vacation, there are other things to catch you up on as well!

So, let’s talk the last day of vacation and the days that came directly after, shall we? Having just finished an epic, practically tailor-made-for-Gretchen vacation, you’d think that I would be flying high on good feelings and vacation happiness for quiiiiite a long time. My internal happiness meter was damn near bursting on that last day in Florida! So what happened next? 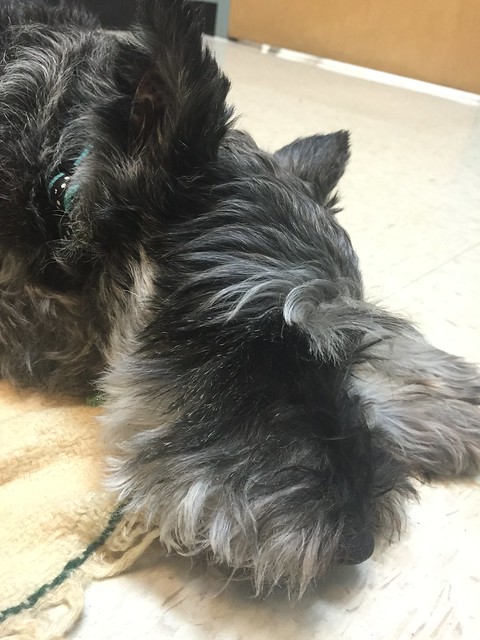 See, on our last day in sunny Orlando, as I lounged around in my new Hufflepuff robes in our hotel room, I received a text from my parents. My dog Harry wasn’t feeling too well, they said. Turns out that he got his little paws on a cooked pork bone (cooked bones of any kind are big no-nos for your dogs, FYI, because of their compromised hardness and potential to splinter) and completely obliterated it.

Now, I’ve been a dog owner for a fairly significant portion of my life, so I’m no stranger to my dogs eating stuff they ain’t supposed to. There was Daxter’s Fizzing Whizbee betrayal of 2012 (which somewhat ironically also happened right after I had returned from Harry Potter World, hmmm…) and the sugar-free gum incident of 2013 (xylitol, a main ingredient in sugar-free gum, is extremely toxic to animals), not to mention all the half-eaten sandwiches and leftover chicken wings that Harry has pilfered from coffee tables in days past. You know, just to name a few.

All of these previous incidents ended up having relatively little impact, thankfully. We got the dogs’ stomachs pumped after the sugar-free gum thing just to be safe, but otherwise all other bad-dog situations luckily passed without incident. So when my parents explained what had happened and that he had thrown up a couple of times, I honestly didn’t think too much of it… until I Facetimed with them later that morning and saw what was going on for myself.

Most vets will tell you that the #1 way to tell if something is wrong with your pet is if there are any sudden changes in personality or energy level. Harry, despite his years, is quite a spry little guy. He’s always excited to see you, he’s always a little TOO excited to see other dogs, he loves to go outside and play and snuggle and, well, you get the picture. 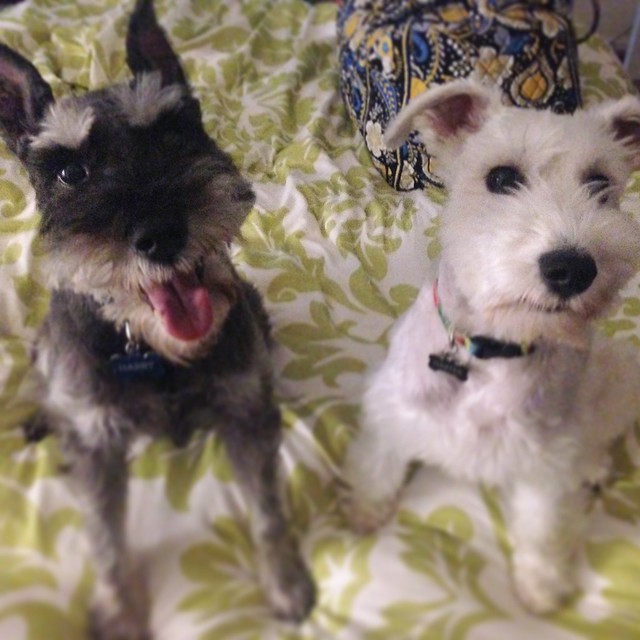 So when Harry, whom I had been separated from for a week, didn’t even seem to register the sound of my voice, I started to get worried. He was thoroughly down and listless, I could observe that much through the Facetime screen alone. He was completely uninterested in food and water, and he didn’t even flinch when my dad tempted him with the question, “Outside?” which is usually a foolproof way to getting him to move his tookus. That’s really when the panic set in.

I told my family to go ahead and take him to the vet, and they immediately went to work on the most imminent issues. Namely, the fact that he was majorly dehydrated from vomiting without taking in any additional water. The vet did a stomach x-ray to see the cause of the problem, and identified one large piece of bone that was stuck in his stomach (it actually ended up being two pieces.) If it didn’t pass on its own, Harry would need a procedure — either via endoscopy or surgery — to remove it. And that’s pretty much when the tears began.

Over the next several hours I would reach a level of hysteria that caused me to cry all the way through the movie John Wick, which Sean and I had tickets to go see before we left town. (In retrospect, John Wick is a TERRIBLE MOVIE to watch while your dog is in the hospital, since the basic premise involves mobsters killing an ex-hitman’s dog at the beginning of the movie.) Now, I know that to some of you, incessant, unstoppable tears seems like a bit of an overreaction to your dog getting sick, but let’s look at the facts, shall we?

1. I am a crazy dog lady whose pups are her children. Let’s just get that out of the way.

2. At 10 1/2, Harry is no longer what I think anyone could consider a spring chicken. Plus, he was really, really sick. He was so sick that my vet couldn’t even give me reassurances that he would make it at first. Worst. Feeling. Ever.

3. I was out of town, out of state, and getting a lot of my information secondhand from multiple sources. Not being able to be there in person made things 1,000x more stressful!

4. And let’s face it. Even without life-threatening illnesses, my natural state at any given point in time hovers somewhere between a 6 and a 9 on the emotional spectrum. I just have a lot of feelings, ok? 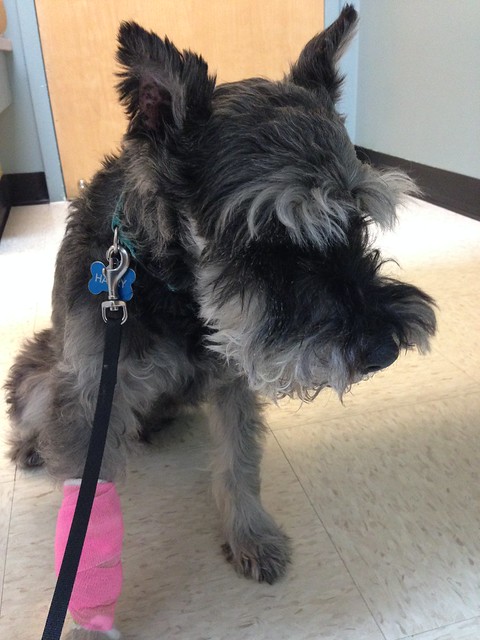 Harry was still very dehydrated at the vet, with regular bouts of, well, let’s just say stuff was coming out both ends, and he was in a lot of pain. Since any kind of invasive procedure would have been risky given his state, they wanted to wait and see if there was a chance Harry could pass the larger bone pieces out on his own. Thus, Harry definitely needed to stay overnight, and I was given the option of leaving him at my regular vet’s office or having him transferred to a 24-hour emergency pet hospital.

Because my vet doesn’t have overnight staff, this was a no-brainer for me. But it also meant that essentially from the time we got out of the movie until we boarded our plane, I was on my phone making arrangements for Harry’s transfer, including getting all my payment information and pet insurance forms to the hospital. 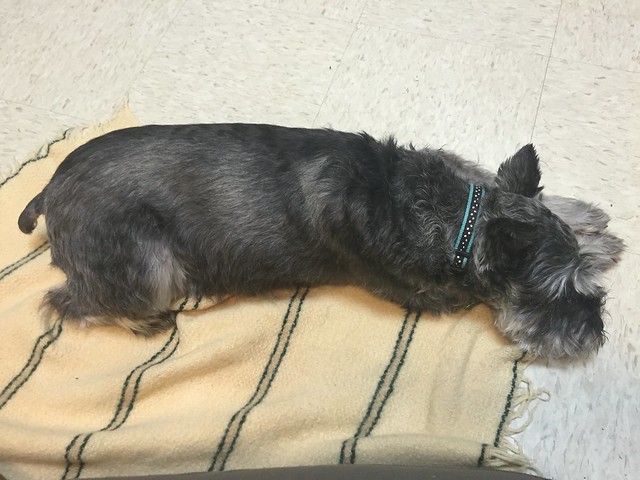 Harry ended up needing to be hospitalized for four days, and during that time we did ultimately decide to move forward with the endoscopic procedure to try and remove the bone once his condition stabilized.

Thankfully, it worked! He was discharged 24 hours after the procedure was complete, and when I picked him up from the hospital I could already see a marked difference. That said, he had definitely gone through a lot, so his recovery was of the slow-and-steady sort, with lots and lots of various meds to give him. He also was still very iffy about eating and drinking, so we had some good bonding as I handfed him all of his meals.

I can officially report that he seems to be 100% back to his jolly old self, and the only real reminders of this horrible experience are his single shaved poodle leg (where the put his IV) and my credit card bill. 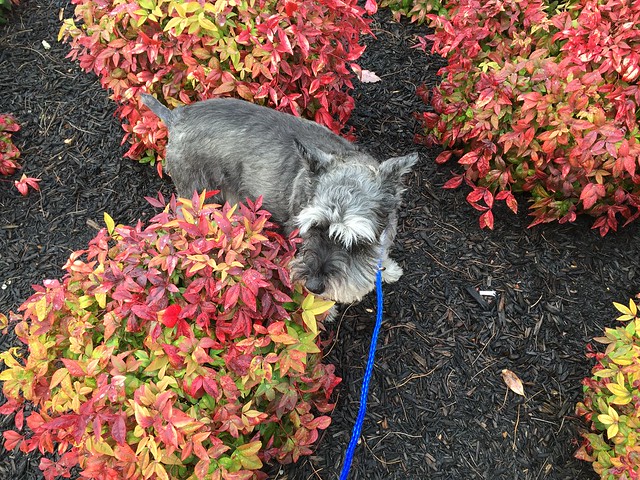 Speaking of which… I’ve said it before, I’ll say it again now, and I’ll keep saying it from now until eternity: If you are a pet owner, you NEED to have pet insurance. Thanks to my policy with Embrace Pet Insurance, I should be getting about 80% back of all Harry’s expenses. Without pet insurance, this “little” incident would have set me back almost $4,000. And between both of my accident- and illness-prone dogs, we’re talking tens of thousands of overall savings in their lifetimes. Just think on that.

So yes, unfortunately my magical vacation did have a bit of a sour note to it towards the end, but the most important thing is that the Harry Powell train is back in business! Also, I learned a lot about what 12-straight hours of crying does to my body, so I guess that’s good to know? I’m not really sure what’s going to happen when I have human kids one day…