Last night was one of the (many) occasions where I wanted to kick myself for leaving my camera at home. I went over to my parents’ for dinner, as they just returned from an amazing and jealousy-inducing Mediterranean cruise vacation on Tuesday. Their cruise departed from Istanbul (not Constantinople) and eventually arrived in Athens, but stopped in Ephesus, Crete, Mykonos, Santorini, Phillipi, Rhodes, and I’m sure I’m forgetting another one. But basically any important historical place in Greece, they went to.

Apparently, my mom didn’t get enough Greek food while there, because when my brother and I went over last night, she was whipping up more Mediterranean cuisine! The spread was so pretty that I was super mad at myself for not bothering to bring my camera. Oh well, I guess it was good preparation for my Healthy Living Summit presentation on photography, eh? Do as I say, not as I do, friends. 😉 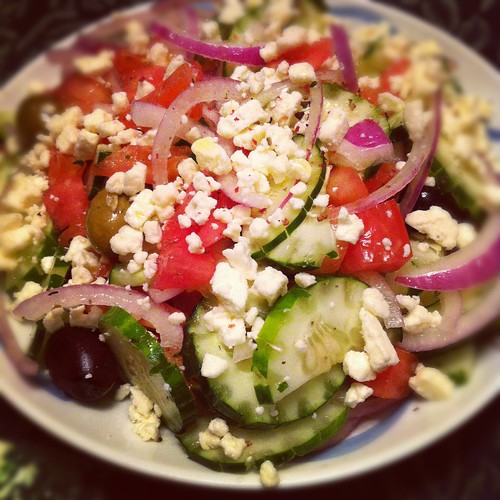 First up was greek salad (which I chopped up) that included cucumbers, tomatoes, red onion, olives, and was dressed with EVOO and salt & pepper. 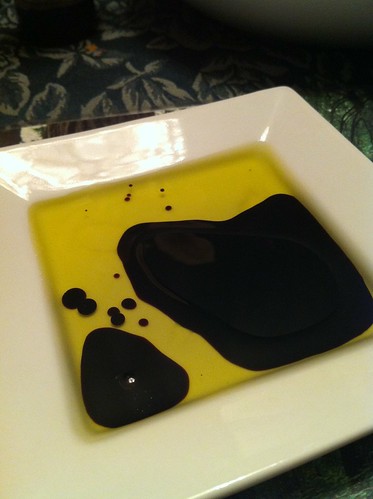 There was also olive oil & balsamic to dip some delicious crusty bread in. 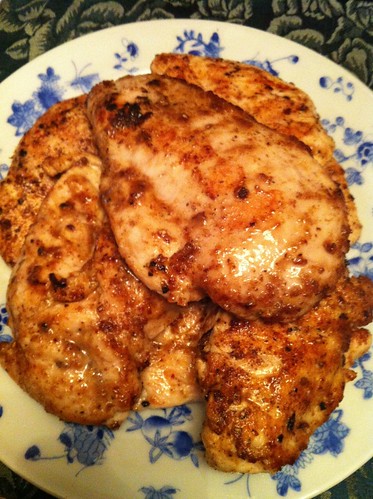 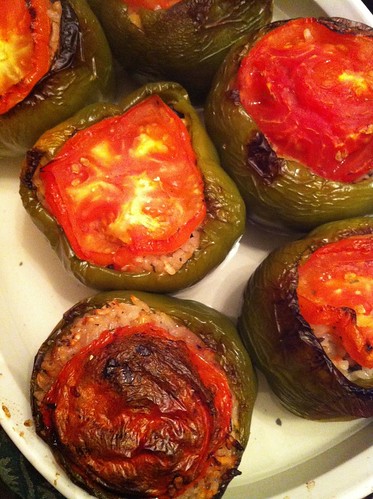 Then grilled chicken with a spice rub and a Turkish stuffed bell pepper recipe my mom was trying out. They were stuffed with seasoned rice, pine nuts, olives, and spices! Behold, my plate: 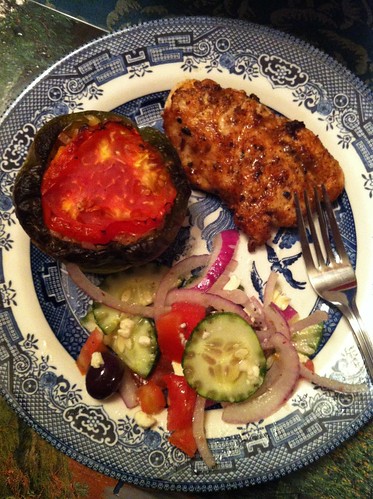 Although I was too full to finish my stuffed pepper. I should always know better than to snack before one of my mom’s home-cooked dinners. Tsk, tsk, Gretchen! 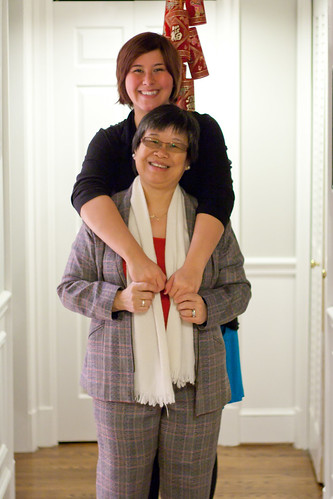 Photo from my mom’s birthday dinner back in February

I definitely inherited my love of cooking from my mom. Somewhat hilariously, she actually didn’t know how to cook until she met my dad, at which point she started feverishly studying my Po-Po (Chinese term for maternal grandmother) so that she could learn! Her specialty is delicious, authentic Chinese food (duh!), but she loves to experiment with all kinds of cuisines. The biggest way in which we differ in our cooking styles is that my mom is very recipe-oriented. She likes to print out recipes when she’s looking for something new, whereas I like to look up recipes more for inspiration. I like to READ cookbooks, not COOK from them (which I know is very counter-intuitive but hey, I’m a rebel.) I’ve tried to learn some of my mom’s recipes, but it really is one of those things where it always tastes better when it comes from her!

My mom’s proclivity for following others’ recipes has always been funny to me, since she doesn’t have any of her OWN recipes written down! They’re locked in her mind like a steel trap, since she’s been making them for so long. So watching her make her amazing sweet & sour pork recipe for the first time went something like this:

“Okay, then you make the sauce. Put in two spoonfuls of this, then pour in some of that, then — oh wait! — whisk in a spoon of that first…”

My poor brain couldn’t quite keep up, and I *still* don’t know how to make it. Ah well, at least next time I know to bring a notepad and pen with me. 🙂

What’s that one dish that mom (or dad) still, to this day, makes best?

PS: Head on over to Healthy Living Blogs today to check out my guest post on why having a “Top Posts” page rocks!

PPS: It’s my sister’s 30th birthday today!!! Also, to a lesser degree of excitement, it’s Sean’s and my 6-month. Kekeke.