Advanced apologies that this is probably gonna be a long’un, friends. In case you missed Part 1 of this weekend of intense awesomeness, be sure to catch up here.

Picking up where we left off, Saturday morning kicked off bright and early at 5 AM with a group of us doing a 14 mile run around downtown Philadelphia.

I was not actually in that group, of course, but I just thought you might like to hear about it. Bahahahaha. Did I have you there for even a second? Instead I gave myself a workout by bolting straight up when Theodora‘s alarm clock went off at 4:30, and then by rolling over and going back to sleep, haha. 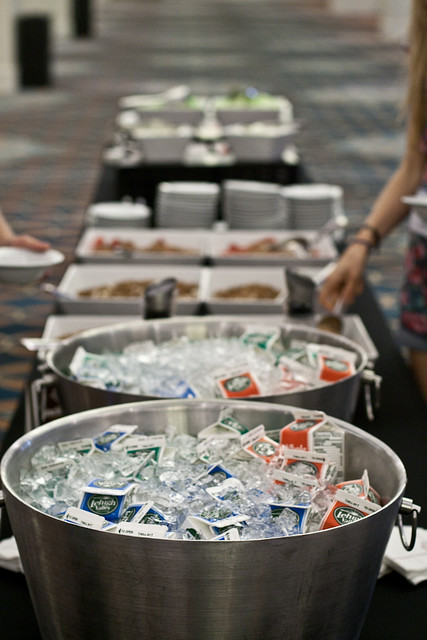 Breakfast was a big cereal bar courtesy of Attune Foods, so I helped myself to a bowl of strawberry Uncle Sam’s with soy milk, a hard-boiled egg, and a big ol’ plate of fruit.

Anne is an Attune Ambassador so she was definitely feeling the feast: 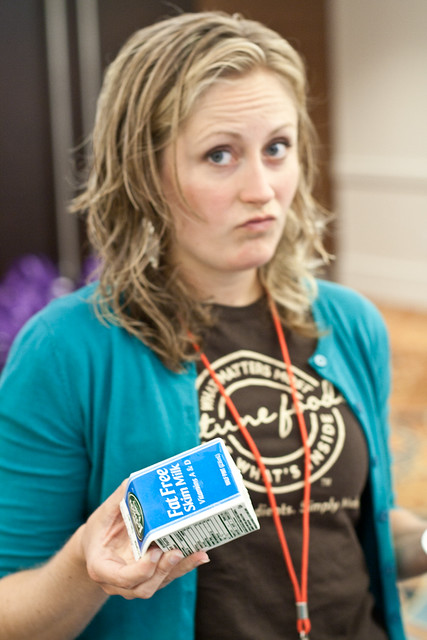 A great way to start off the day! (They do still say it’s the most important meal, you know.) 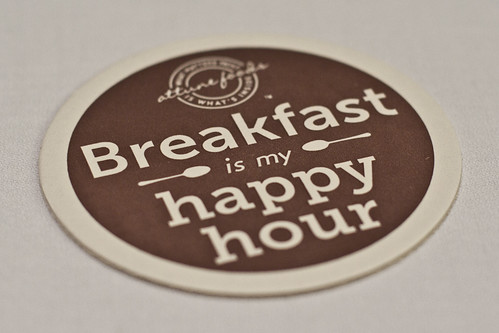 After foodage was consumed and opening remarks were, er, remarked upon, we tucked in for a full day of breakout sessions on various topics. So much information! The first session I attended was by editor of Daily Spark and Spark People (recipe sites many of you probably use daily!) Stepfanie Romine. 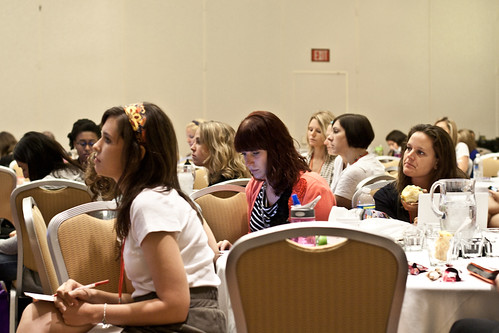 It was entitled “Writing a Better Recipe” and it really got me thinking about the sad lack of well-structured recipes on this blog. Be on the lookout for some changes to my basically non-existant Recipes page! 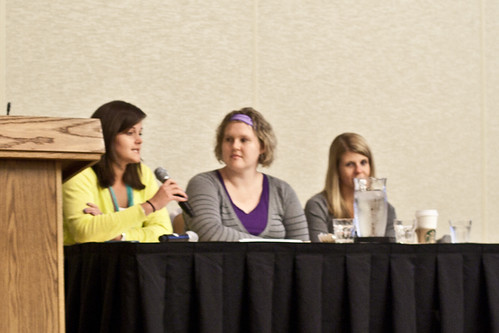 I also hit up the presentation on networking through blogging and social media in your area by Cynthia and my amazing roomies, Ashley and Theodora. We got many ideas from this for future DC blogger meetups, so my local peeps should stay tuned! 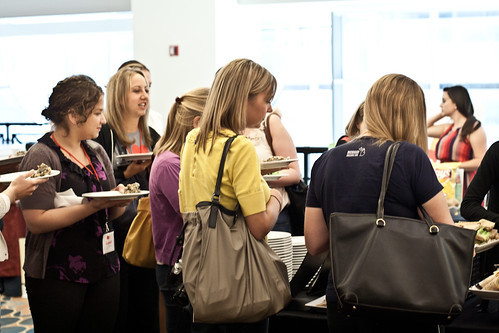 By the time the morning sessions were over, people were HANGRY. Feeeeed us, we cried! 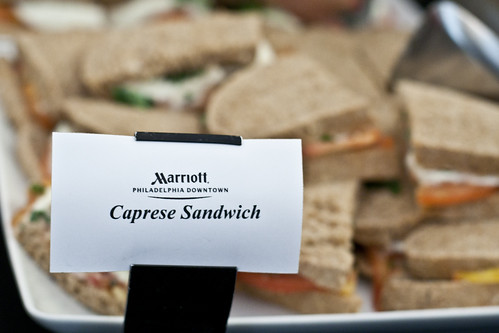 So feed us they did. 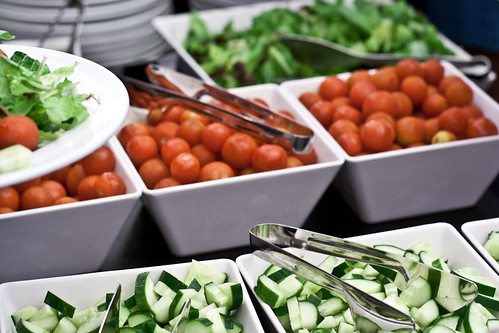 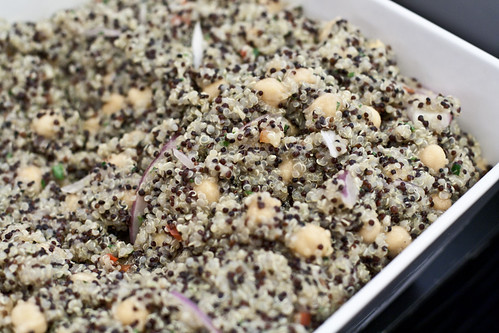 The conference served up a buffet of vegetarian sandwiches, salad, and this absolutelypositively delicious quinoa and chickpea salad that I must recreate. 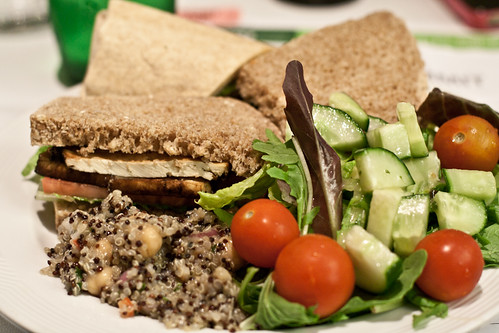 Nom. I loaded up my plate with some of everything but ended up not really partaking in much of the roasted veggie wrap or tofu sandwich as neither was too great, IMO. I went back for another half-o-caprese’wich instead because you know that cheese makes it aaaaall better, hehe. 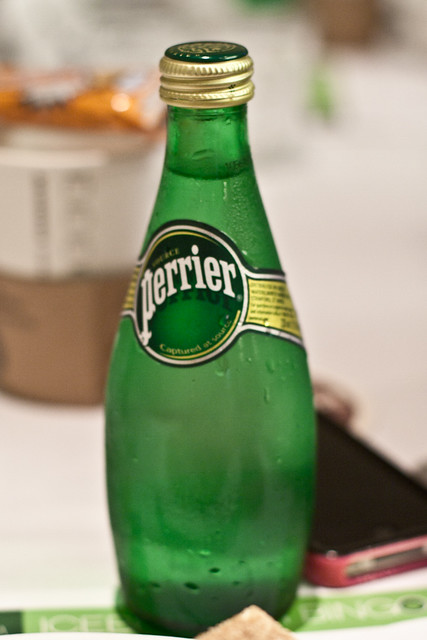 And I felt super fancy washing down my sammies with a Perrier. There really is just something about sparkling water that makes you classy all over. 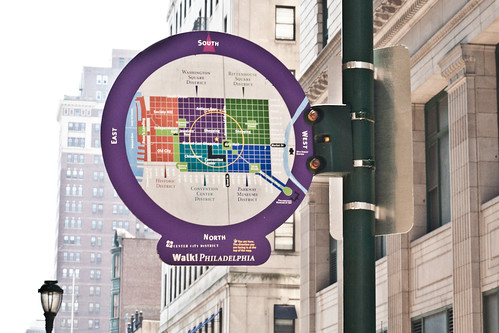 After lunch, Anne, Theodora and I really needed to stretch out legs. We thought we’d only go for a 15-minute walk around the hotel but ended up missing the entire keynote presentation — oops! It gave me flashbacks to our similar session-skipping adventure in Boulder back in June! 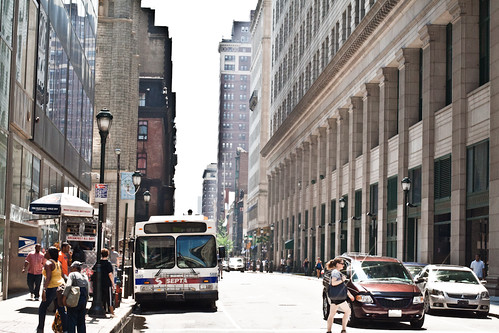 Guess we just got wrapped in walking the street of Philly. Totes worth it. 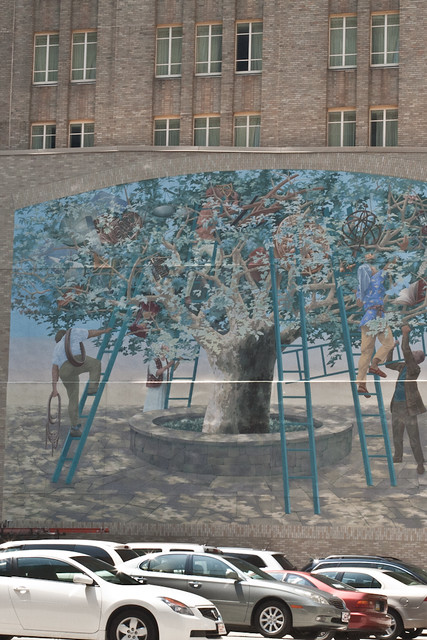 And anyway, we made it back just in time. 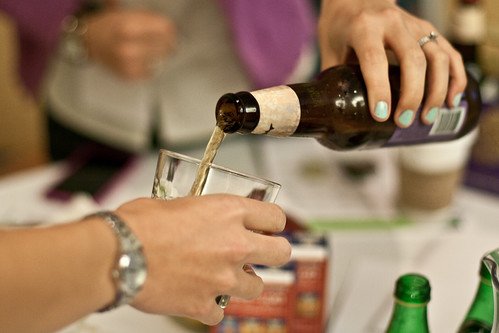 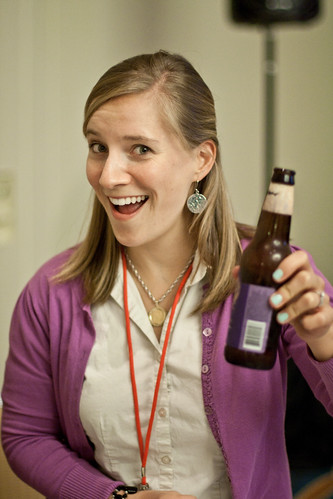 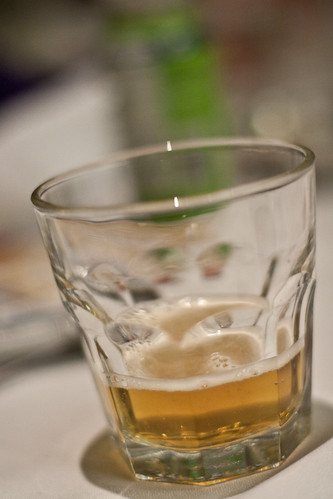 Shanna, a Delaware blogger, brought Kath a 4-pack of Dogfish Head beers (my fav!) and Kath generously shared with the whole table. 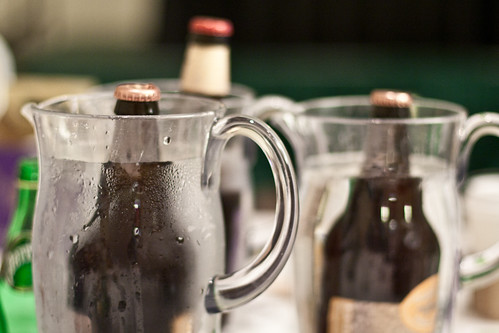 We improvised a chilling method, and everyone got to have a taste. 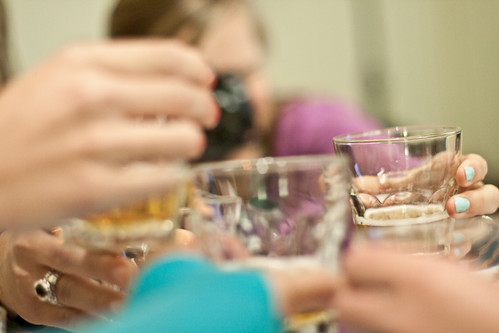 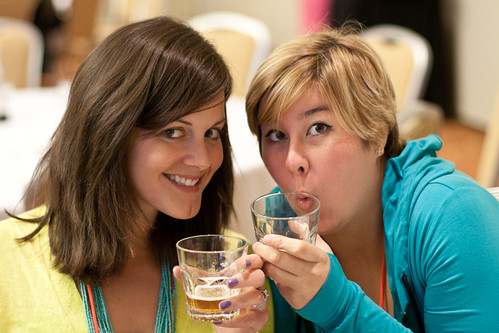 Ashley and I were happy bears, obvi. 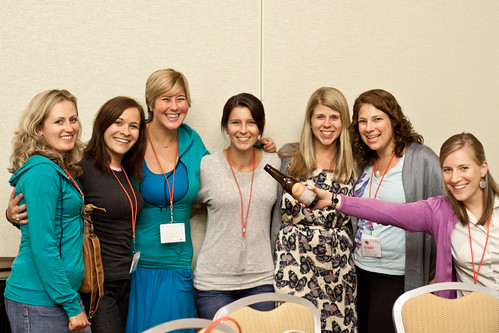 So you know, we were nice and socially lubricated for the piece de resistance of conference sessions: Blog monetization with the brilliant and beautiful Katy Widrick!

So many nuggets of wisdom. So little time. Before I knew it — poof! The conference was wrapping up. Props must be given to Meghann for organizing pretty much the entire thing. 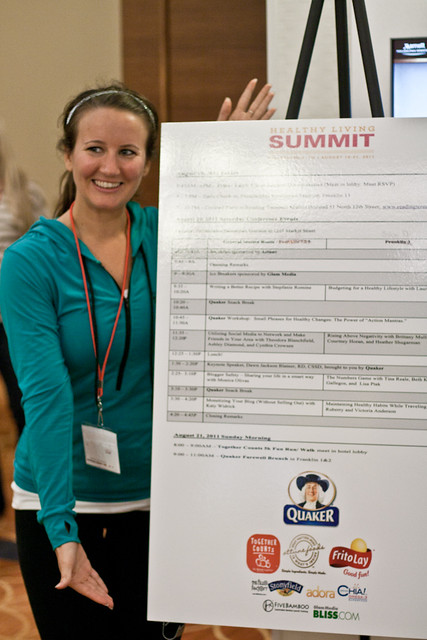 But don’t worry, it wasn’t time to wrap up quite yet. A big group of us continued on the happy hour festivities into dinner and beyond after the official closing remarks. I didn’t lug my big camera out with me that night, but suffice it to say that good times were had. I’m sure you can catch up with the shenanigans on any number of other blogs.

Friday morning was spent on a nice 5K walk through Philly (I ran up the Rocky steps!)

Thanks for the pic, Meghann! Can you spot me?

Followed by an oatmeal bar sponsored by Quaker. I ate my face off, then used the added body weight I gained from eating approximately 1.4 million pounds of oatmeal to squish down my suitcase so I could fit my swag in it. 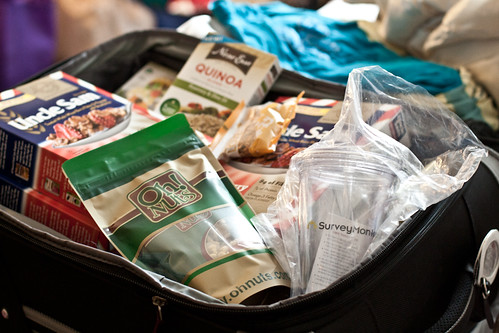 Mission so not accomplished. 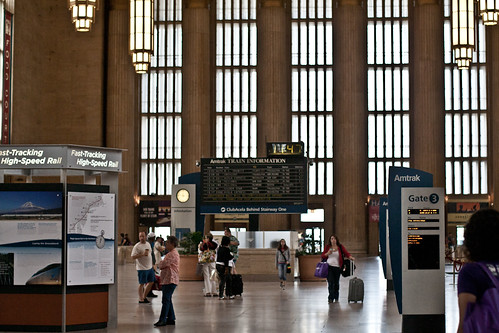 Sadly, I had to lug my three separate bags o’ stuff through the train station and say goodbye to this fantastic weekend. And after cuddling with the pups (I did miss them, after all. Let’s all petition for a dog-friendly conference next year, yes?) and reading like 67 weekend recaps, I conked out. But like the good little blogger I try to be, it was business as usual when I woke up this morning:

Shock! Shock and awe! I wasn’t expecting to lose anything, not even this wonderful glorified half-pound after this weekend. Sure, I ate healthy food, but for being at a health bloggers conference I really phoned it in fitness-wise (so what else is new?) I’ll take it!

Onward and downward, and so it goes. <3