If you missed it, you can catch up on my first post about my li’l family’s recent trip to San Francisco here!

Soooo, living in a hotel for a week with a baby was… interesting, to say the least. We stayed at the InterContinental San Francisco, which was a very nice hotel and provided a real crib for us, as well as a mini-fridge for me to keep my milk and whatnot. But, despite having a spot for her to sleep, we were still living in one single room… when we’re used to putting her to bed in her own room, on her own, every night at home. This, naturally, made putting her to bed each night — and for naps — a bit of a challenge. 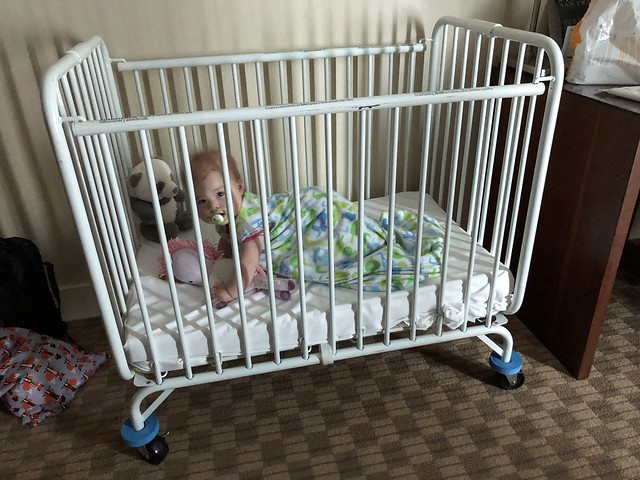 Because she’s not used to dealing with us being in her room when she goes to sleep normally, our very presence was a big distraction for her, even if we were willing to shut off all the lights and basically tried to go to sleep at the same time as her (lol.)

That said, it’s not like the two of us wanted to go to bed at 7 PM each night anyway, so we had to make a lot of in-the-moment decisions as to how to get her to sleep. In the end, we wound up getting her to go to sleep initially by strapping her into her infant carseat + stroller, and then wheeling her into the bathroom once she finally dozed off, lol. HARDLY ideal, but it at least gave us a little bit of time to unwind, order in food, and watch a show or something before we were ready to hit the sack ourselves. She’d usually snooze for a couple hours, after which point I’d try to transfer her to her crib… or I’d just bring her into bed with us. 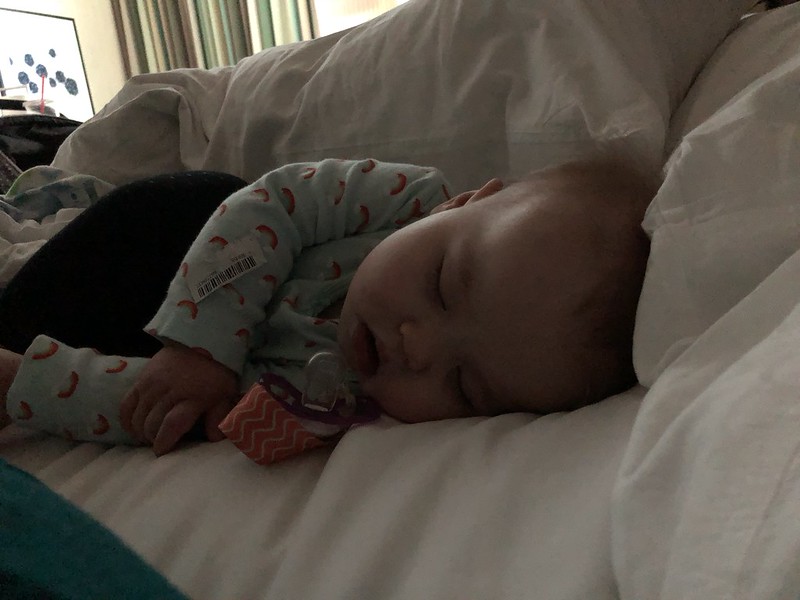 We tried wheeling the whole crib into the bathroom and putting her down that way, but it was all still just too stimulating for her. At least by having her in the infant bucket, her vision was somewhat limited and she was also secured so she couldn’t sit up, stand up, and play around (which is what she kept every time she was in the crib). 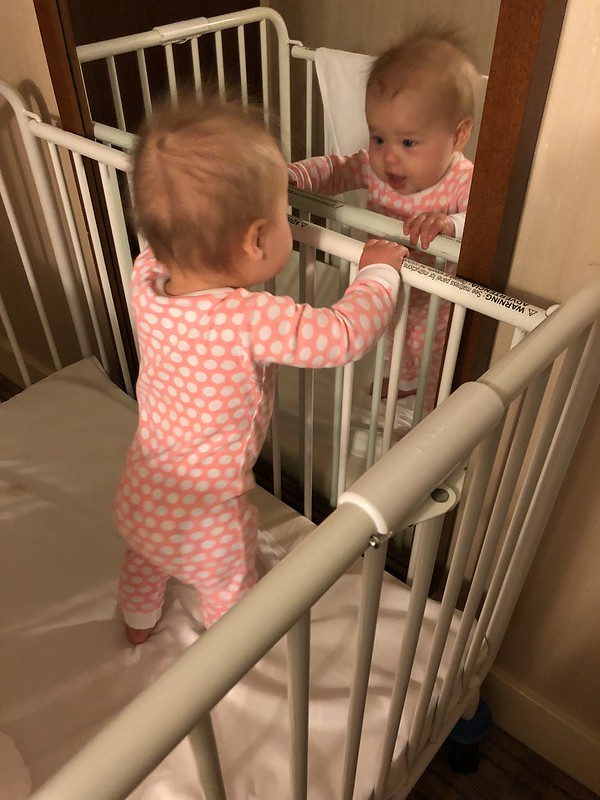 Of course, this isn’t really a solution if A) your baby can’t fit in their infant carseat anymore (which, honestly I think that this might have been our last trip with it, since she’s just about outgrown the height limit), or B) your hotel bathroom isn’t big enough to put anything in. It’s literally just what happened to work for this singular trip, lol. It’s also worth noting that you should fully buckle your kid, with straps tightened, whenever they’re in their carseat — for Penny, it’s mainly because she could easily launch herself out of it were she so inclined, but also there’s always a chance of them slipping down in their seats, which isn’t safe.

Anyway, the sleep thing aside, everything else went pretty smoothly as far as hotel life can go. Since hotel rooms are relatively bare-bones, it was a pretty easy, sparse space for her to crawl around without me fearing her death. I read a tip online that said to bring a thing of scotch tape with you for easy baby-proofing — you can tape washcloths over corners, put tape over outlets, tape up wires, etc. So I did bring some, but we actually didn’t end up using any of it.

Some other things I packed for the trip that we did end up using included an inflatable bathtub (<– this one from Munchkin is $12 on Amazon) which was great because there were no grippies in the bathtub. 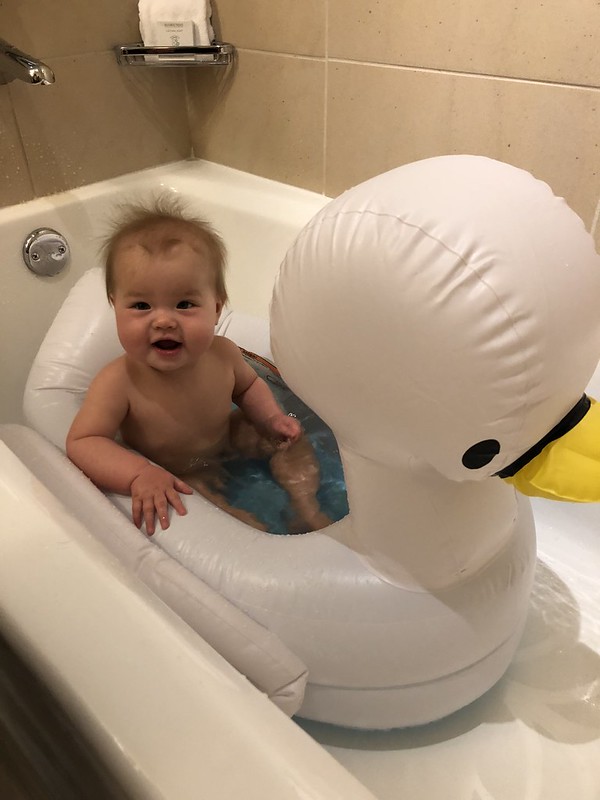 I also packed our portable high chair, which we had previously purchased so we had a place to put Penny when visiting Sean’s parents, but turned out to be great for giving Penny her breakfasts and snacks in-room. 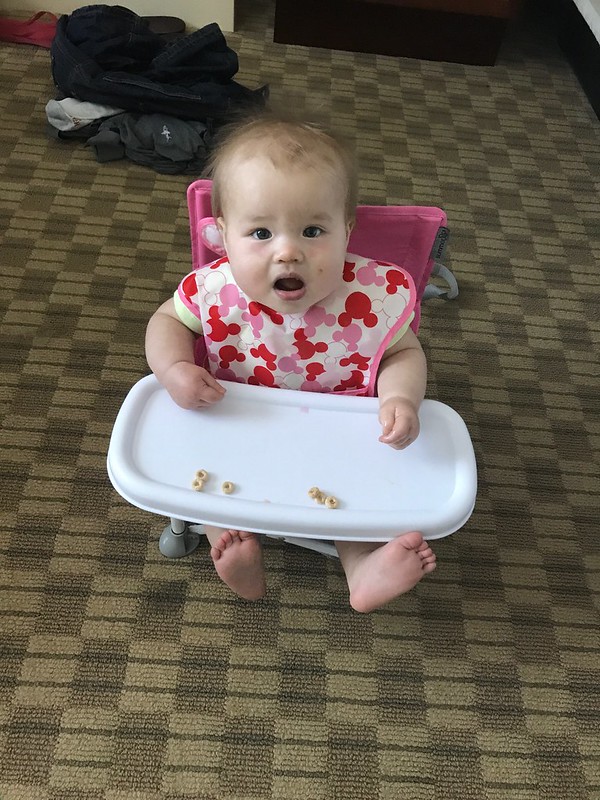 Overall, though, the experience mostly made me thankful that normally when I travel, it’s to someone’s house (my sister’s, for example, where I’m actually headed with Penny next week) where I have access to a lot of extra amenities, room, and freedom for the bebe. And also that going with an AirBNB or springing for a multi-room suite is probably the way to go for future vacations when a home isn’t an option, lol.

At least I can say that we successfully tackled a cross-country flight (two of them, technically!) as well as a week-long hotel stay and the only damage that seems to have been done is to my milk supply (womp womp, but that’s a story for another post.) And most importantly, of course, is recognizing that while I’m sure I’ll never stop getting anxious and somewhat stressed when it comes to traveling with Penny (at least not until she can be easily bribed with candy and an iPad, lol), everything does tend to work out. After all: have love, will travel!