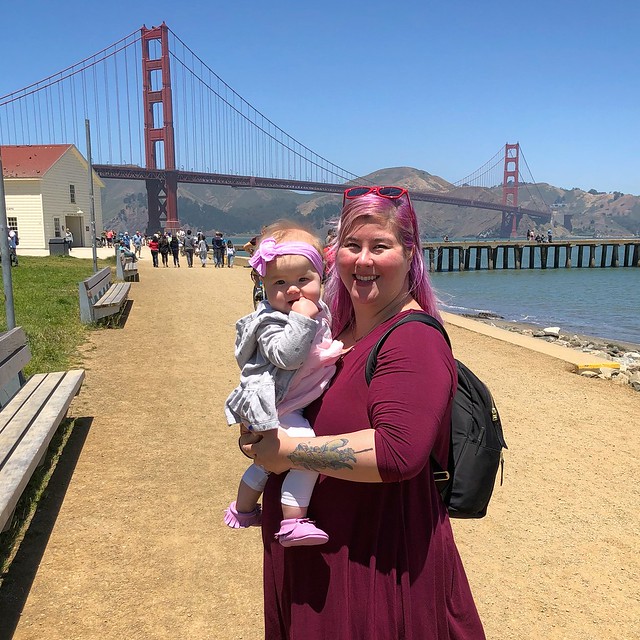 I’m back from a week in uncharacteristically-sunny San Francisco! Every year, they bring together all of Yelp’s Community Managers (99% of us work remotely) for a work summit at Yelp HQ, and this year’s was our best yet! 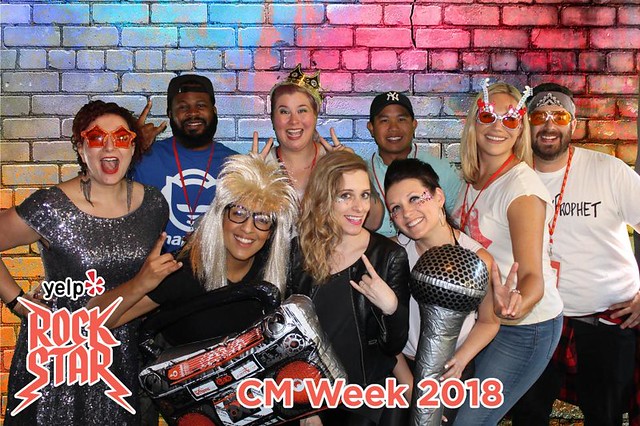 Of course, that statement isn’t exactly unbiased, considering that I was 1) on the planning committee for this year’s CM Week, and 2) I brought these two suckers along for the ride this year: 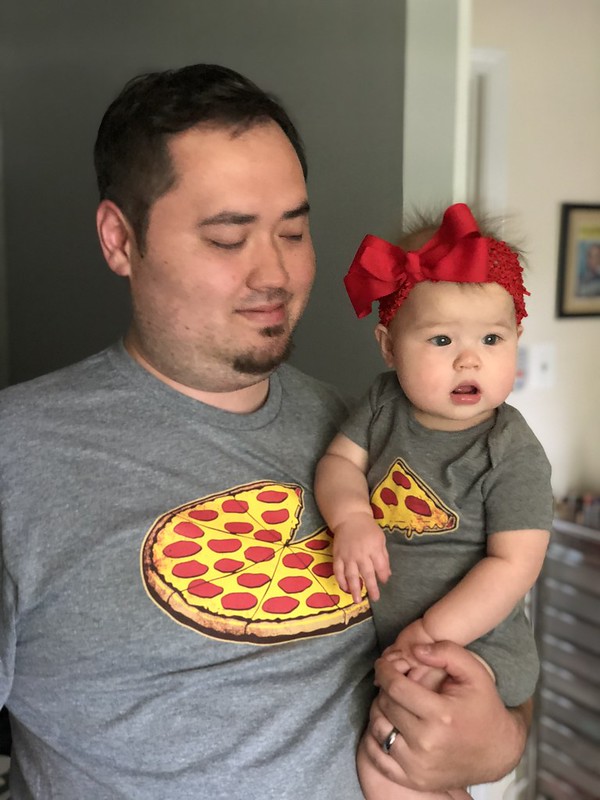 Yes, I did, in fact, drag my husband and baby 2,800 miles across the country with me on this work trip. Some of you may not be particularly surprised by this — I mean, I’ve barely spent like, 8 hours at a time away from Penny since she’s been alive. You think I was going to be able to handle being apart from her for an entire week?! I was having anxiety just thinking about the separation anxiety… that I, myself, would have experienced. Penny, on the other hand, probably would have barely noticed I was gone — much to the delight of my coworkers, stranger danger just doesn’t really seem to be her thing.

It was an awesome, if admittedly exhausting, conference. My amazing coworker who was also on the planning committee with me managed to score Andrew WK as the guest speaker, so that was freaking epic, and it’s always just such a treat to see my coworkers whom I normally only get to follow from afar. 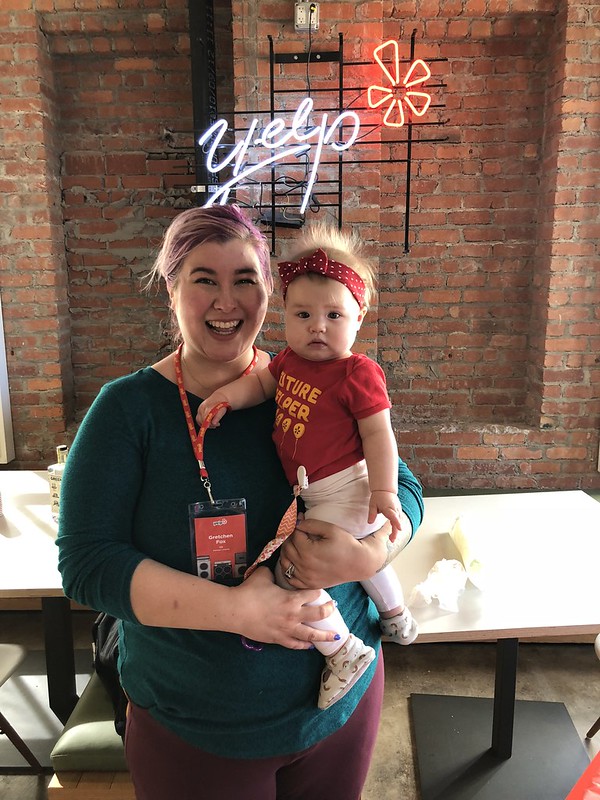 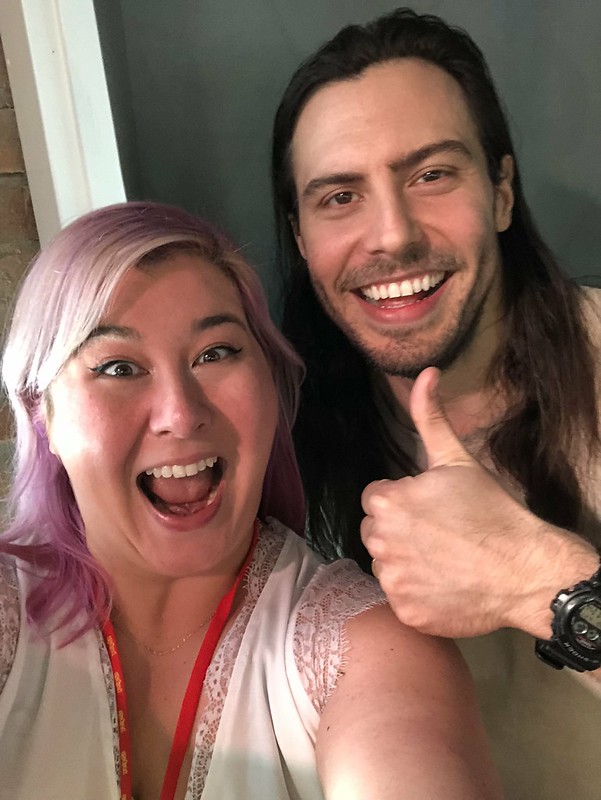 Aside from a hiccup at the beginning of the week, the whole trip felt like a win-win on most fronts, really. Sean and Penny got lots of special bonding time exploring the city together, and I got to reunite with them at the end of each day. And since I wasn’t super distracted fully missing them the whole time, I was better able to focus on the conference, so I came away from the week with lots of new ideas and invigoration that I want to implement back into my role as Yelp Community Manager here in Northern VA. 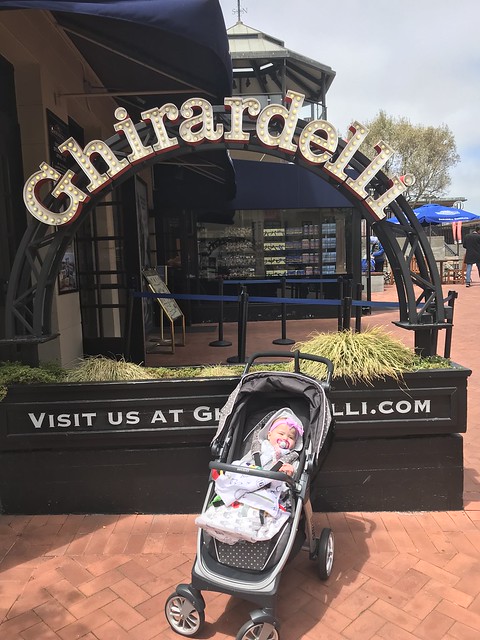 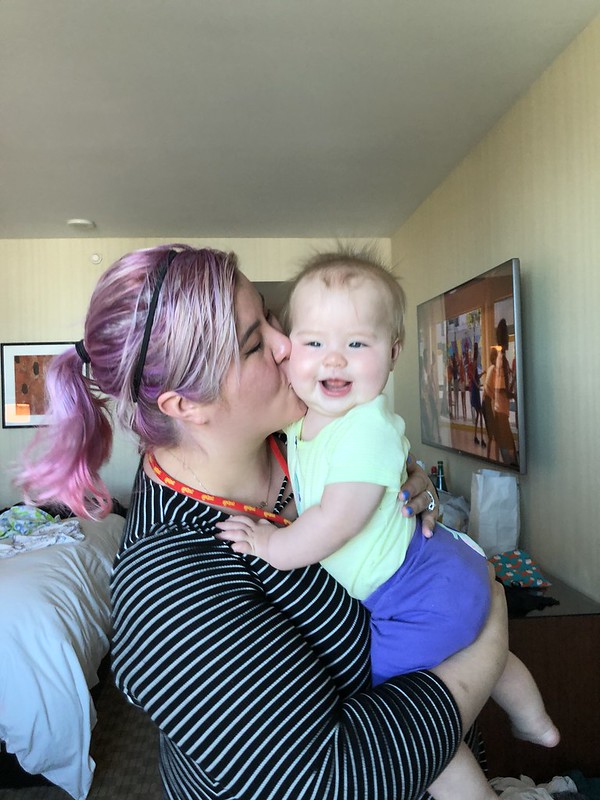 AND it finally gave me a reason to do all the fun touristy stuff that I’ve always intended on doing out in SF, but just never got around to. Can you believe I’ve been out here FIVE times for this annual conference, and yet this was my FIRST trip to see the Golden Gate Bridge?! 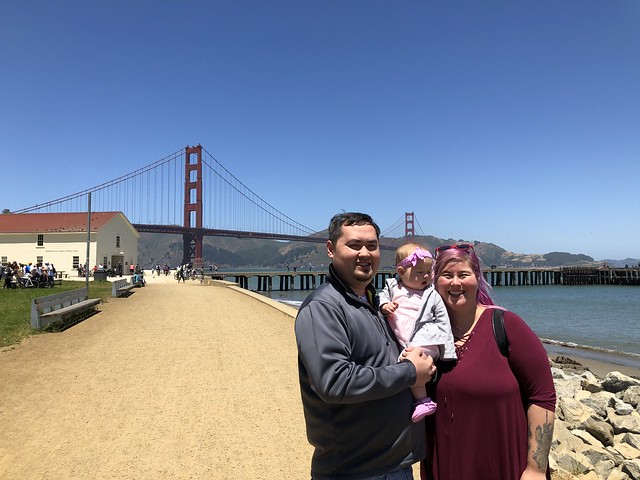 That aforementioned hiccup though? Involved Sean taking our poor little Penny-poo to the frickin’ HOSPITAL on the first day of my conference! I woke up that morning and noticed her eyes were really red and puffy, which was alarming but we were like, okay, maybe she’s really tired, she didn’t sleep that well, there’s a big time difference, etc (this was at like 4 AM San Francisco-time.) But then I unzipped her sleeper and saw that she had a crazy rash ALL over her poor little body. And that’s when I really freaked. 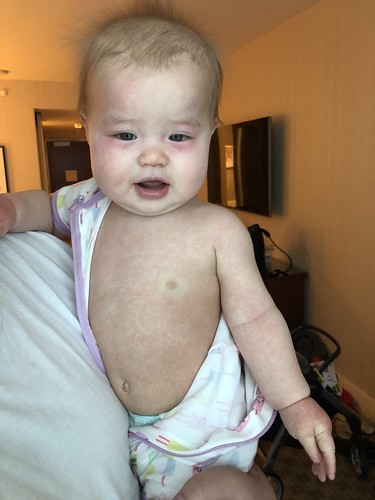 Since it was the very first day of the conference, I had Sean rush her over to the children’s hospital right away and tried to hold it together while awaiting an update with baited breath. Honestly, having to keep my ish together because I was literally part of the team leading this conference, while my poor baby was being taken to the hospital without me was one of the hardest things I’ve ever done. Apologies to my two coworkers who almost certainly were not expecting me to break down in tears when they asked me how Penny was doing, lol.

Luckily, the doctors said that despite it looking quite shocking to us, it actually wasn’t a huge deal. PHEW! Official diagnosis was a viral rash — a reaction to either a cold she had previously developed, or something she picked up on the flight. It had pretty much resolved on its own 24 hours later, and also luckily, this all happened so early in the morning that I received the update before Day 1 of our conference had even officially kicked off.

So yeah, I can definitely say that while I learned a lot job-wise on this trip, I learned even more parenting-wise. Because holy mackerel, between crazy early morning rash eruptions,nd just the flights there and back in the first place, I definitely felt like I was put through my paces. 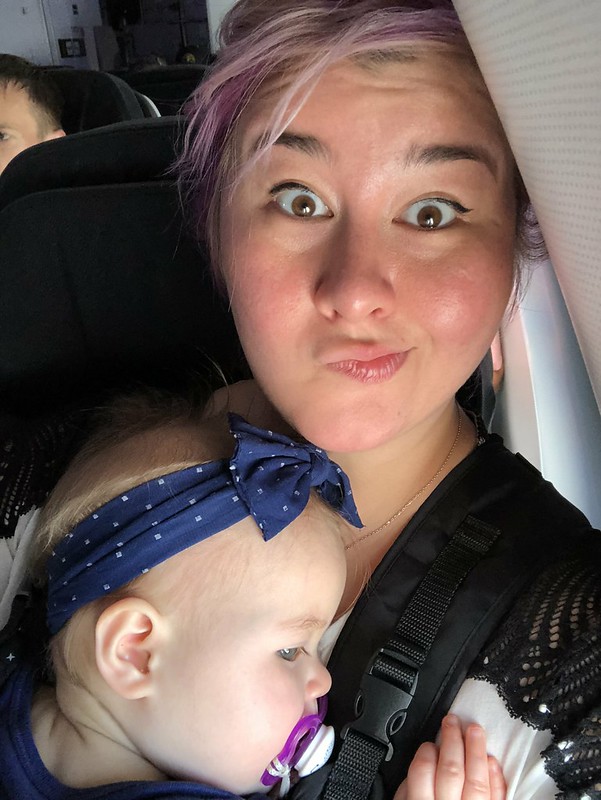 The flights, man. I mean, I knew that flying with Penny as an almost-10-month-old would be different from every other time I’ve flown with her (the most recent being back in March), but I still don’t quite think I was prepared. It certainly cemented the fact that the golden window to travel with your baby really is when they’re still a sleepy little lump, that’s for sure. 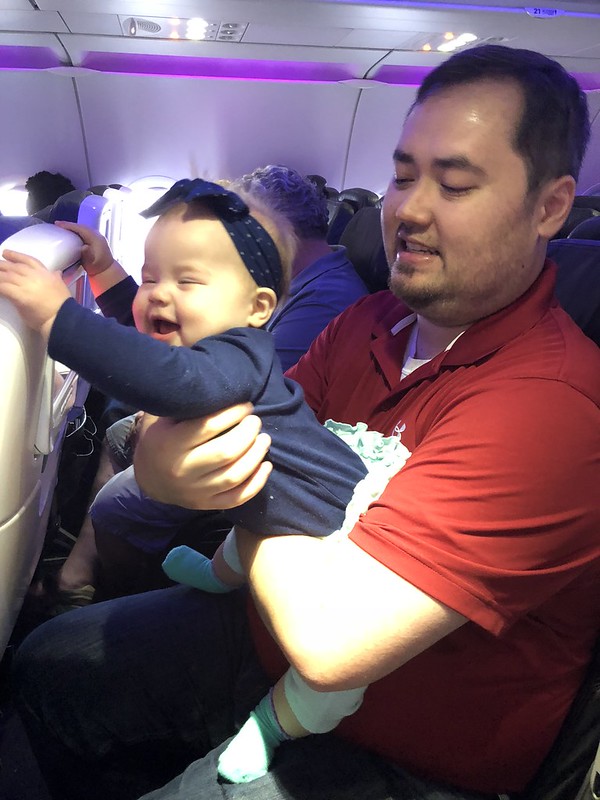 This time around Penny was just a little energizer baby — she was so interested in everyone on the plane, so uninterested in staying still, and got so bored. Which I mean, okay, sure, that’s fair. These were the longest flights she’s ever done by quite a bit, and being trapped in a metal box for 5 hours is boring! 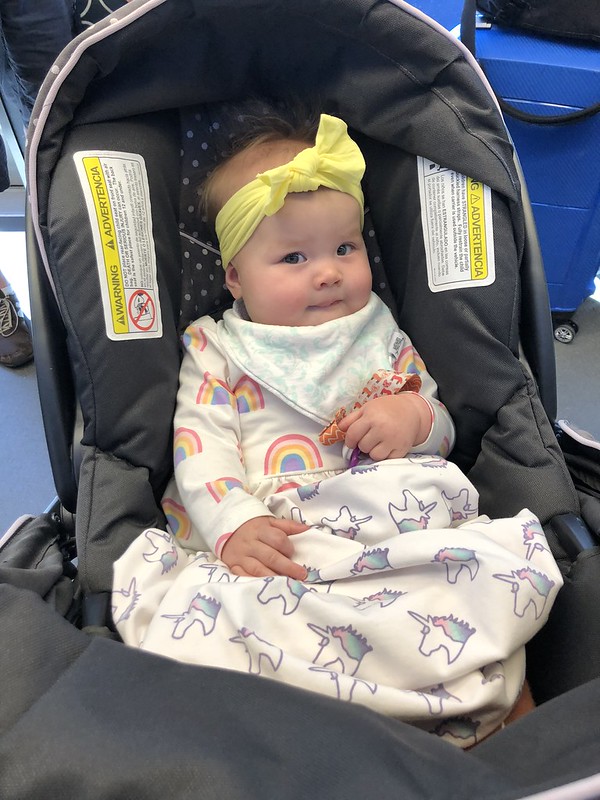 But regardless how much I understand why she was hard to manage, it still didn’t make dealing with it in the moment that much easier. There’s the fact that it also took quite a bit of effort to get her to sleep on the plane — she straight up refused to rest or stop moving or basically quiet herself in any way when Sean had her, so getting our little nugget to close her eyes fell solely on me. And unlike in trips past, when popping her on the boob was a surefire way to get her to go to sleep, she is just far too busy and distracted these days to nurse pretty much at all during the day (which is its own issue that I’m dealing with, but that’s for another post methinks.)

Anyway, on the way out to SF, we had an empty seat in our row (HEAVEN!) so I was able to lay back at an angle and drape her over my torso. So despite the fact that we had to get the airport at like 5 AM that day (0_0), the trip out to California wasn’t actually that bad. 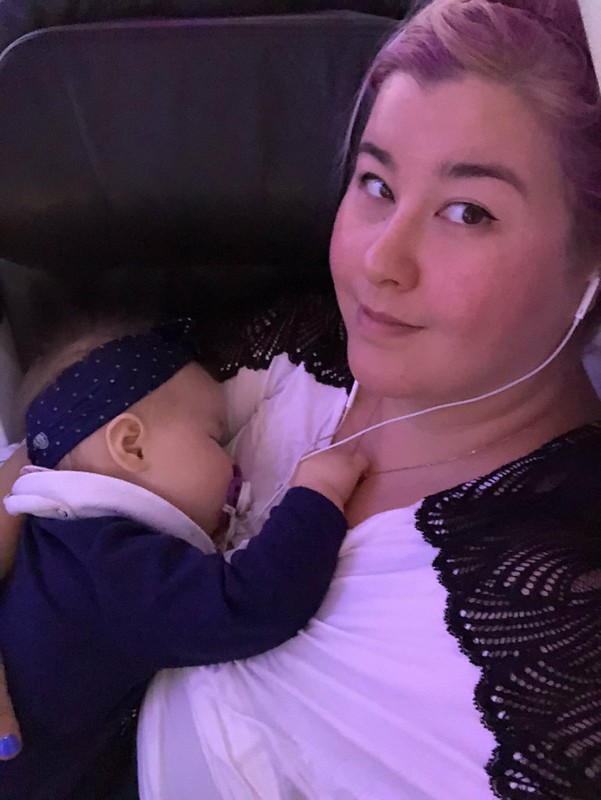 Our return flight, however, was completely full, much later in the day, and, of course, happened after a loooong week, so it was a little bit of a different story. Thankfully our row-mate was a super skinny 12-year-old boy, so he really didn’t take up much space and had very large headphones because Penny was a literal handful the entire flight. She didn’t cry all that much or anything, but was just, well, a baby. 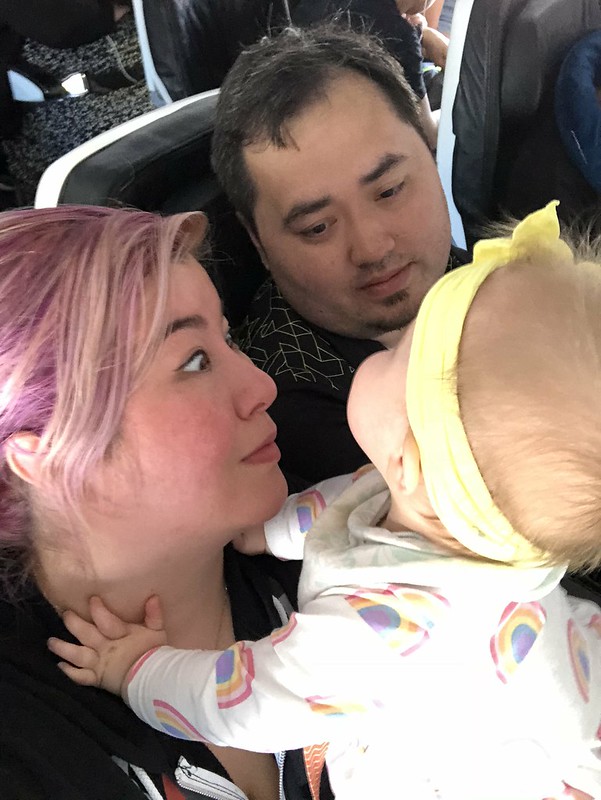 Climbing all over us, trying to go back and forth between Sean and me incessantly, and just not. wanting. to. sleep. The only way I was finally able to get her to pass out was by strapping her into her carrier and bouncing in my seat for like half an hour. Ever bounced a 20-lb weight for thirty minutes straight? 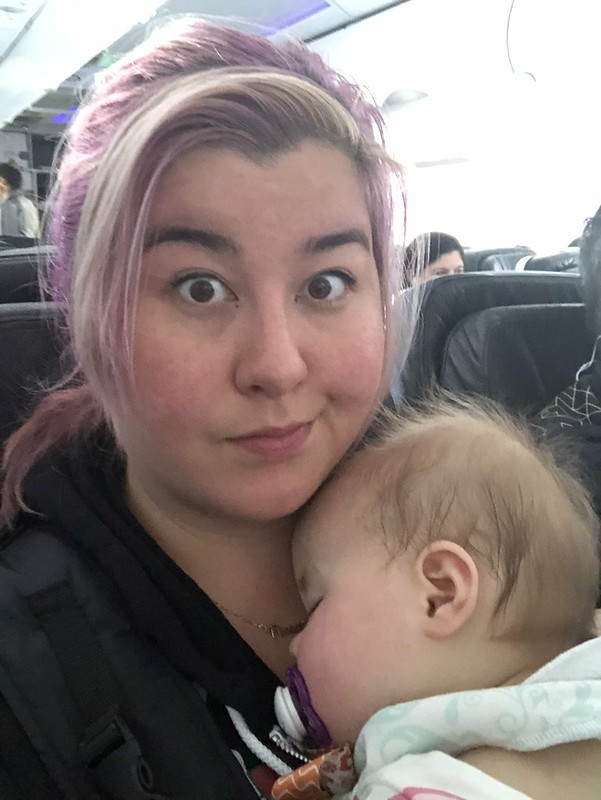 Every single muscle in my body is sore today, lol. I’m guessing it also has something to do with all the walking, holding her, and general stress/craziness that the week as a whole entailed, but I feel like I did back-to-back Crossfit sessions. I really need to get back into better shape if I’m going to be able to continue keeping up with her! 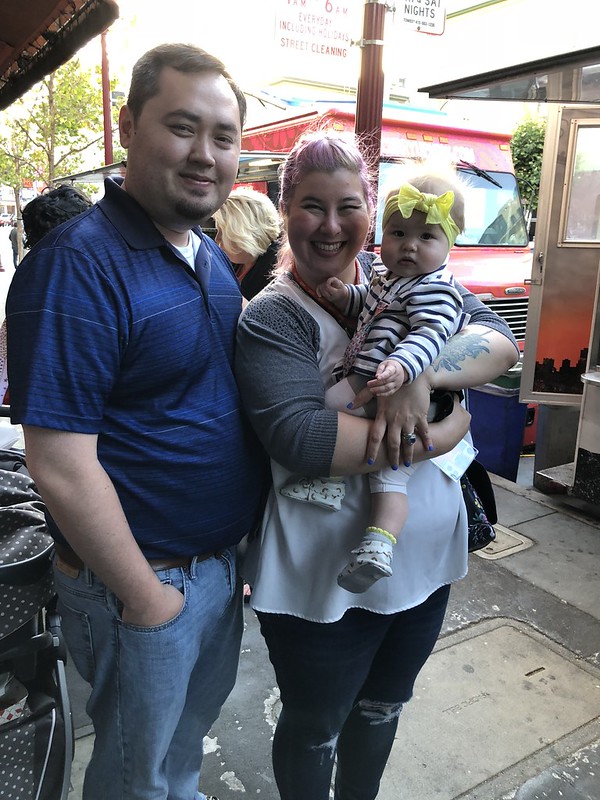 Anyway, with that, I actually think I’m going to sign off here. I usually write my blog posts the night before they go up, and miraculously, Penny went to bed at 7 PM EAST COAST TIME, despite sleeping in until at 11:45 AM yesterday. So basically, she might actually be some kind of magic baby who can get back on schedule after just one night?! Which means even though my jetlagged body thinks it’s only 9 PM right now, it’s actually midnight and I should already be sleeping (as my wakeup call is sure to come sooner than I’d like.)

I fully intend to chat about what it’s like living in a hotel with a baby in my next post though, so let’s just consider this post Part 1 of our San Franciscan adventure. See you back here soon!