Hey, hey, hey! I hope everyone had a great weekend! I most certainly did, thanks to a myriad of reasons, really, but a big part of that was attending Taste of Georgetown on Saturday! 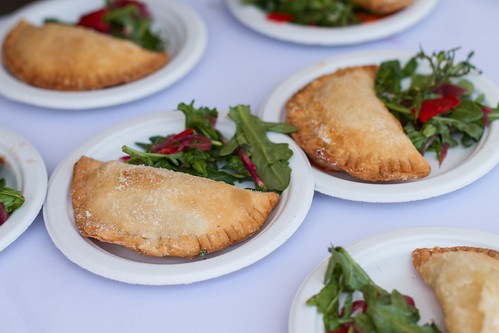 I love “Taste of” events because they really appeal to that part of me that is never satisfied only being able to order one thing off a menu. I’m too indecisive! I’d always rather get a bunch of things to share (or at least steal food from my friends’ plates, hehe) because I am greedy like to sample lots of different things. 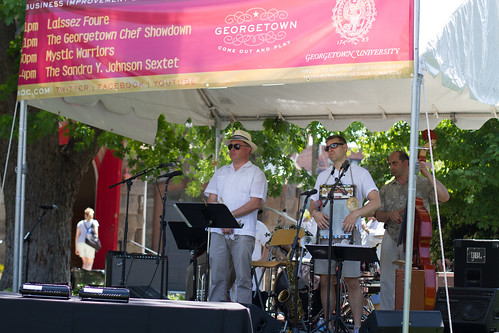 In addition to getting to nom on great foods from some of Georgetown’s hottest restaurants, I also participated in a chef showdown challenge at the festival with the Yelp DC Community Manager, Kimberly, and her fiance, Rob! 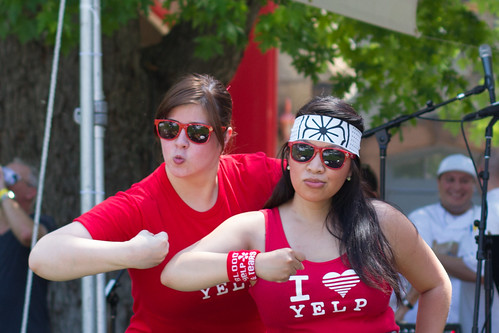 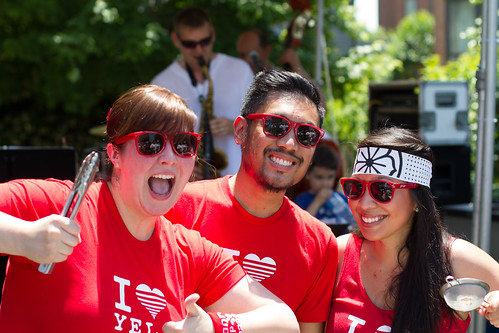 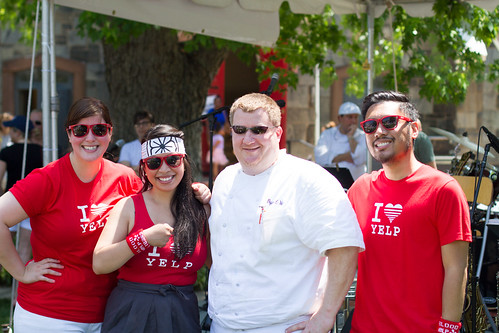 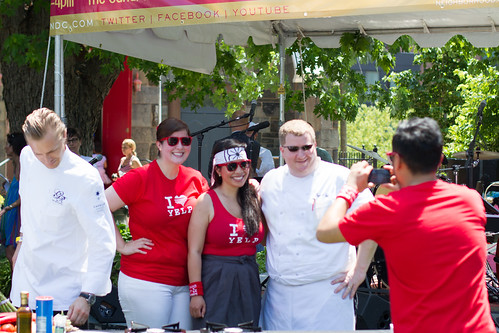 It was crazy fun, albeit it SUPER hot (just check out how red my face is in the pics above, hahaha), and I got Sean to come along and play photographer. Each team was paired with a local chef — ours was Chef Bryan from Paolo’s restaurant — and came up with a master chef meal that included our secret ingredient… 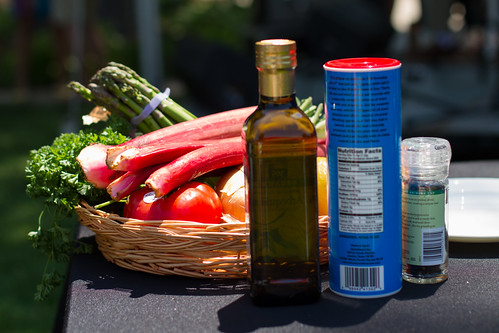 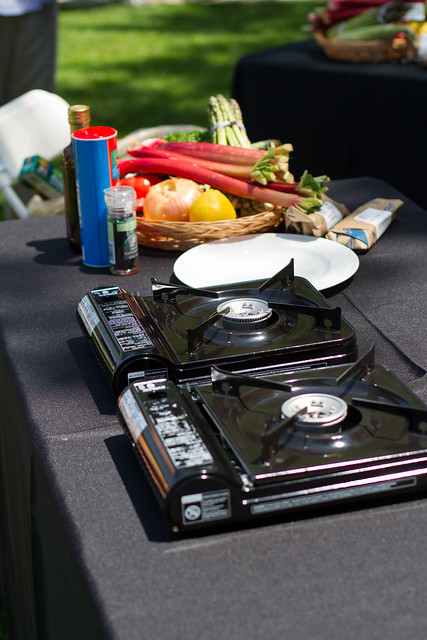 I’d never even eaten rhubarb in anything but a pie before, so it definitely proved challenging to incorporate into a savory meal. Under Chef Bryan’s tutelage, however, we came up with a surf-and-turf plate that my mama would’ve been proud of. 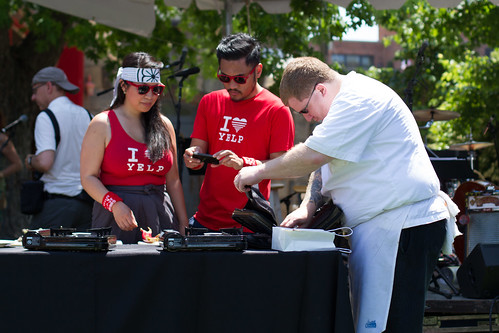 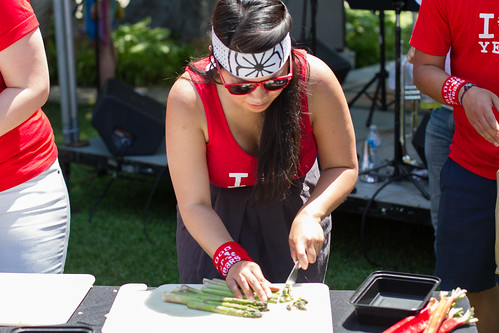 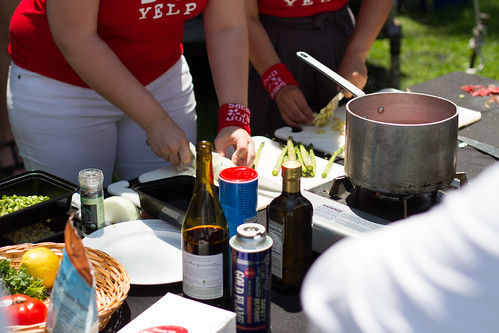 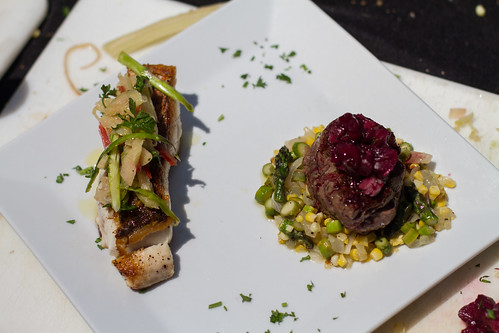 Ta-da! Not too bad for a butane burner meal, eh? 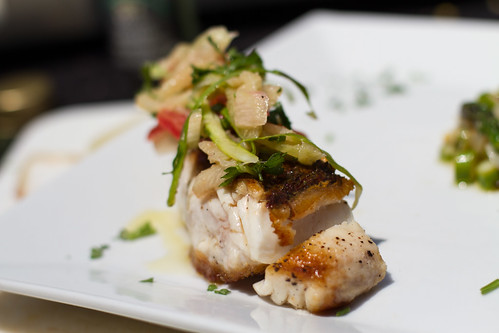 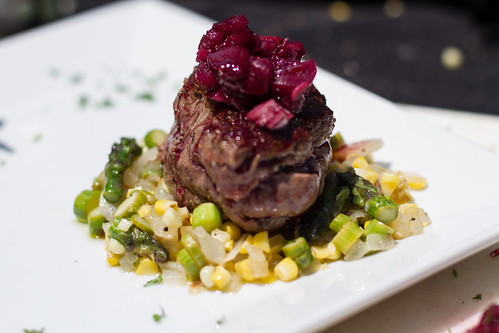 We made a red snapper with a raw rhubarb and asparagus slaw on top, and a filet atop a corn and asparagus succotash with red wine rhubarb compote on top. The filet was AWESOME, and the fish turned out great, although I was a little iffy about the use of raw rhubarb in the slaw. It’s just got a very naturally sour/tart flavor, and is really fibrous, so I don’t know if I’m such a fan of it raw. Cooked, though, it’s delicious, and I have so many ideas for incorporating it into savory meals now! 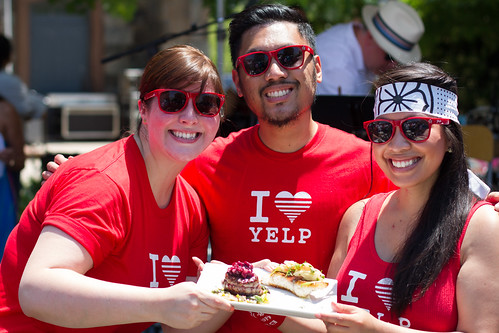 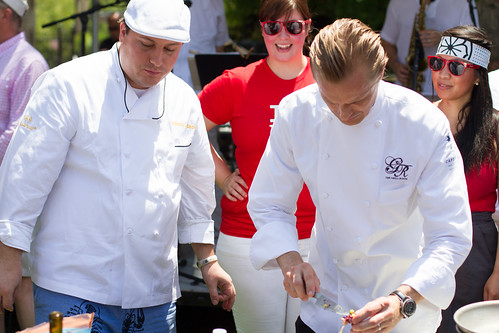 Unfortunately, I guess the judges agreed with my assessment because we came in second (though the judges said it was super close!) but I still think Team Yelp were all winners that day. It definitely makes me want to start showing off my knife skills (I really am quite proud of my quick-chop prowess!) on a more regular basis. I think between this and watching marathons of Food Network Star, I’ve been bitten by the bug…

If you had a cooking show, what kind of show would it be? Or, as they say on Food Network Star, what would you “Culinary POV” be? I like to think I’d be able to have some sort of Whasian-related hook, but the truth is I actually know how to cook very little Chinese food! Hahaha. Guess I’d actually stick with my healthified comfort food thing.