Happy February 15th, friends! I realize it lacks some of the fanfare and pizzazz of February 14th, but hey, at least it’s Friday, right? And hopefully at least some of you are still riding the wave of a lovely Valentine’s Day–I know I am! Not to brag (even though I totally am), but I’m preeeetty sure I had the best Valentine’s Day ever. 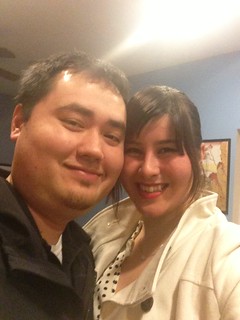 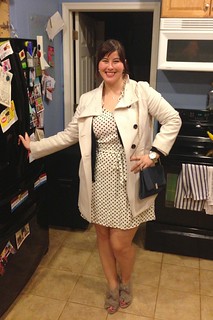 When we left off yesterday, I told you all that Sean had planned some big Valentine’s surprise dinner, and wouldn’t tell me where we were going. And I expressed my love-hate relationship with surprises (mostly love, I’m just really impatient, haha), and my anticipation over where we were going. Well, as I found out about an hour before we left for dinner, our destination was…

Kushi is a sushi restaurant in downtown DC that I have wanted to go to for FOREVER, and never had. I was SO excited to get to finally try it out. But before we were off to dinner, Sean had another surprise for me first: 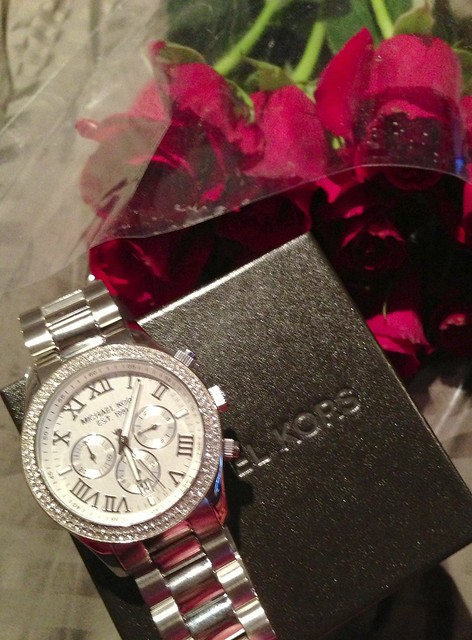 The generous son of a gun got me a Michael Kors watch and roses for Valentine’s Day! Ughhhhh, why is he so good to meeeeee? I LOVE it. I’ve had an MK watch on my wishlist for a loooong time (no, like, literally on my Amazon wishlist) and while the one I originally had on there is not available any more, Sean picked this beauty out for me. And that makes me love it even more, because he chose it himself! Eeeeee, my first fancy watch! I feel like such a grown-up. Though I am just realizing that talking about this makes me seem more like a spoiled teenager than an adult… and I don’t care. 😀 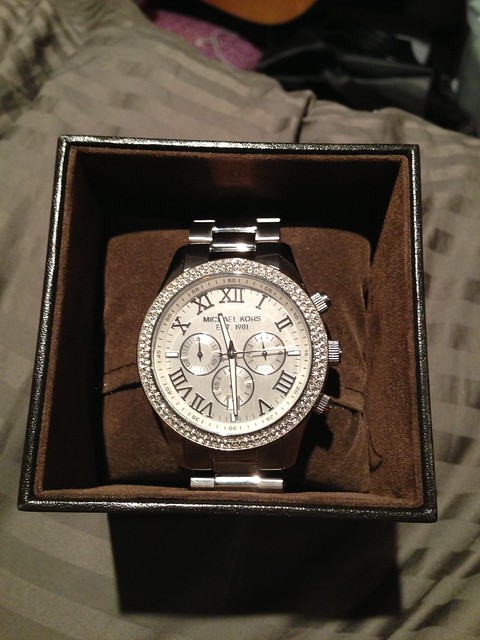 What was I talking about? Oh, right, dinner. Heh. So! New bling dangling off my wrist (I need to get a few links removed for it to fit properly, but I couldn’t NOT wear it!) and off we went to Kushi. 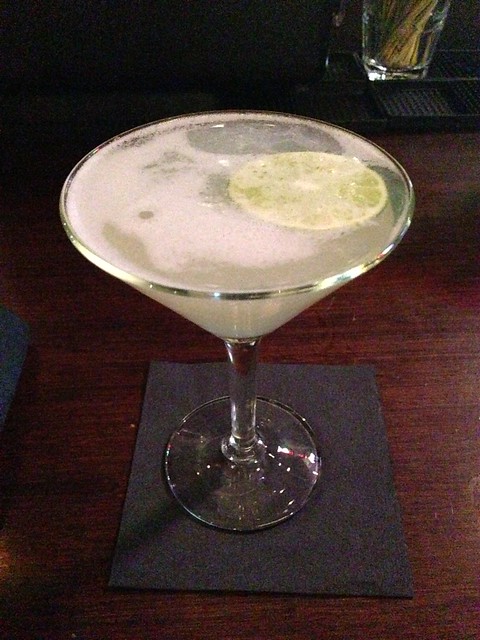 I started off with a Sake Blossom cocktail while we were waiting to be seated. It included lime juice, sake, St. Germaine’s (I still don’t know what this is, haha), and vodka. Needless to say, it was entirely too delicious (spoiler alert: I got kinda drunk last night, bahaha). Then we were seated–admittedly, the seating in this restaurant doesn’t give off a super romantic vibe because everything is set up VERY close together, but I didn’t really mind.

Because it was a special occasion, and also because it was the first time there for both of us, we both opted for Kushi’s Tasting Menu rather than ordering things a la carte. (Apologies for all the iPhone photos, but I just didn’t really feel like dragging my giant DSLR around with me on Valentine’s Day, haha.) 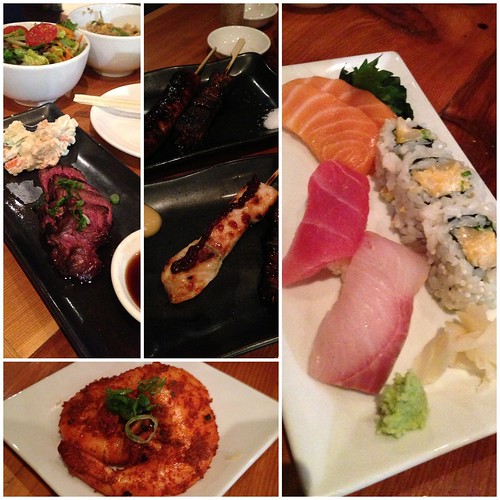 The tasting menu includes a sampling of basically all the various food types that Kushi offers. While they obviously do have sushi on the menu (thank goodness), the restaurant’s real “thing” is Yakitori–grilled meats and vegetables on skewers. It’s essentially classed-up Japanese street food. The menu started out with some sake (see where that whole “I got drunk” thing comes in?) and then a choice between three appetizers. Both Sean and I opted for the spicy peel-and-eat shrimp. Then, we both got to choose two kinds of yakitori from the menu.

We chose all different yakitori types so we could try the highest number of items, of course (love working as a team!) and got the pork belly (amazing!), duck with scallion (delicious!), pheasant sausage (the surprise winner–SO good!), and a rather lackluster chicken with plum sauce. Despite the chicken being disappointing, the other three were absolutely scrumptious. 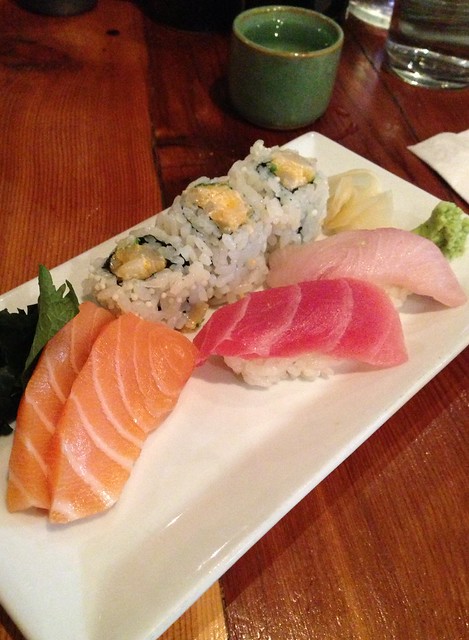 After the yakitori we were served some miso soup, which was good but pretty standard, and then… a sushi sampling! The sushi at Kushi (heh, that’s fun to say) was very fresh — I was very excited to see how thick the salmon sashimi was, because it’s my faaaaaavorite (it’s like buttah). We also got tuna and yellowfish nigiri, and three pieces of a wasabi scallop roll. The sushi was very good, although I almost wish it had been a little bit more of an adventurous selection, given that we weren’t able to pick the kinds of sushi included in the tasting menu. Even so, this was definitely my favorite part of the meal because, well, sushi is my favorite thing ever. Duh.

We were given an option between three things for the main entree of the meal. I opted for the hangar steak, while Sean got the pork tonkatsu (fried pork cutlet). My steak was cooked very well (medium-rare, even though they didn’t ask how I’d like it cooked) and had a really smokey flavor, but I actually liked Sean’s more. The pork was just so juicy! I got a salad on the side, and Sean got Japanese fried rice. They also both weirdly came with some kind of Asian potato salad, which was good in a culturally jarring kind of way, hahaha. 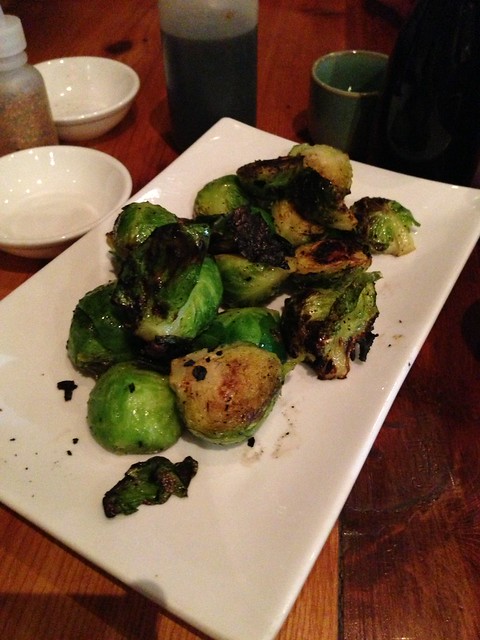 Oh, before I forget, we also ordered one a la carte item off of the menu in addition to the tasting menu. As soon as I saw they carried a brussels sprout dish, you know I HAD to get it! It was advertised as being cooked with garlic butter, but I have to admit that these were pretty disappointing. They were smokey, but otherwise seemed unseasoned. Sean said he liked mine much better, hehehe. Still, I never regret ordering brussels sprouts, so all’s well that ends well, I guess! 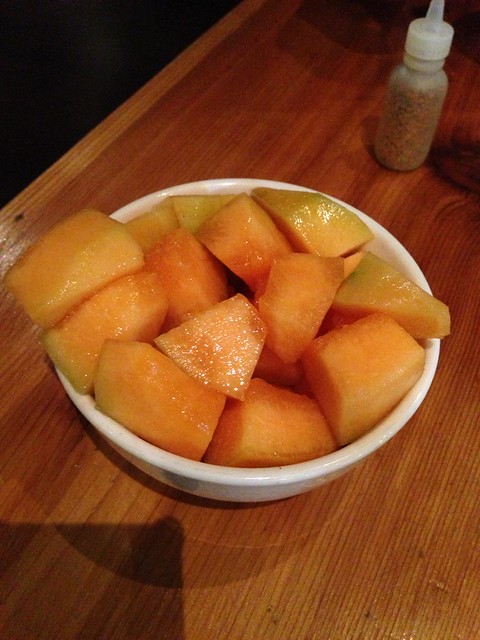 For the last part of the tasting menu, dessert was included. We were offered two gelatos or a bowl of seasonal fruit, and since I made the unfortunate decision to give up sweets for Lent, I was forced to go with the fruit option. I was actually kind of looking forward to it… until it arrived. Instead of a bowl of different fruits, which you kind of would assume based on the wording, I got one giant bowl of cantaloupe. So, I basically ate an entire cantaloupe for dessert, hahaha. Not the granded cap on a good meal, but oh well.

So! Overall I really did enjoy my meal at Kushi. I’m glad we did the tasting menu and I got to sample a bit of everything, but I think I might have built it up in my head a little bit much though, because I wasn’t utterly blown away by it all. The service was good–I really liked our waitress–and almost all the food came out in a very timely way, with the exception of our main entrees. If I lived closer, I might want to go back for more yakitori (that pheasant sausage really was insanely good!) but I will be sticking to my beloved Koi Koi for my sushi cravings.

So there we go: my epic and romantic Valentine’s Day celebration, complete with good food, an entirely-too-generous gift, and quality time spent with my love. Cheesy, I know, but so am I so… suck it up. 😉 Of course, I haven’t even mentioned the final good thing to come out of this, which is that when I awoke this morning–blessedly NOT hungover, huzzah!–my makeup still looked totally boss. Hence, the whole happy February 15th jazz from the beginning of this post, hahaha. Never doubt the utility of a good eyeshadow primer! 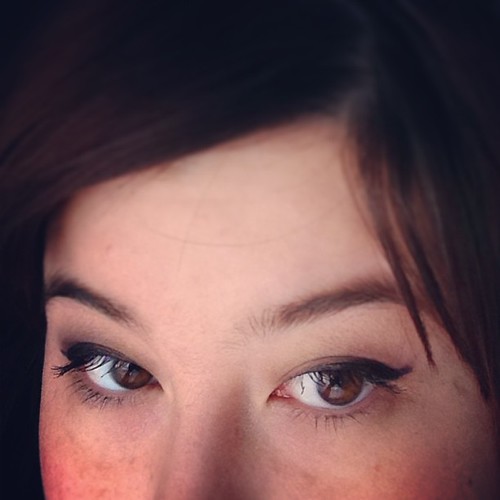 This makeup brought to you by last night.

I hope you all had a wonderful V-Day, and will have an equally wonderful weekend! Tomorrow evening, I’m meeting back up with the fabulous Lauren from Oatmeal After Spinning, and Kelly from Kelly Fiore Writes (who I met for the first time last weekend at the Frederick Restaurant Week sneak peek) and we’re going to Founding Farmers in Bethesda. I had a not-so-great experience at the Founding Farmers in DC when I went there for my birthday a few years back, but I am excited to give this location a shot!