First of all, thanks so much for your thoughtful comments on my last post. Sharing my vulnerabilities on here has always been one of the best (if scariest) parts about blogging — you guys are the best! I’m already feeling a lot better, mostly due to your kind words, partly because my skin has been slightly more cooperative the past couple of days, and also because I think I’m finally coming out of the emotional funk I’ve been in for the past week or so. Maybe I’ve been PMSing? I don’t really remember what that feels like, lol, and since I got the Mirena IUD a few months ago (jury’s still out on how I feel about it… meh), even though my cycle did return (booooo) things are still not exactly predictable.

Anyway, I think that’s enough potential TMI to kick off your week!

Sean, Penny, and I had a great, lowkey weekend. We lounged in our jammies, went out to lunch… 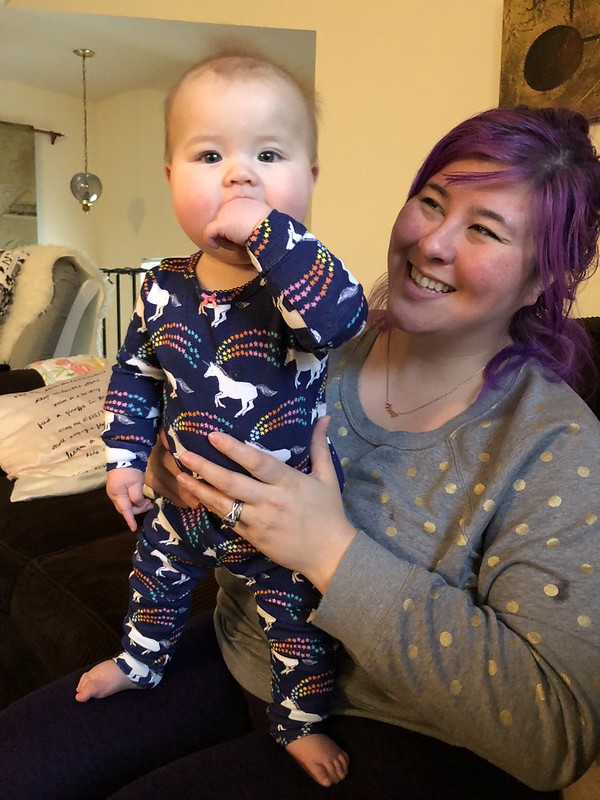 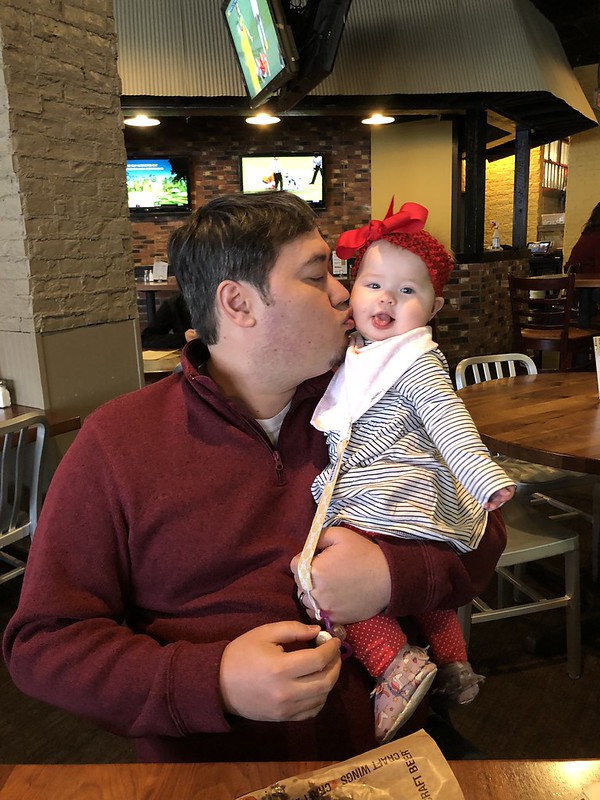 and went to a housewarming party at my friend Jessica’s new apartment! 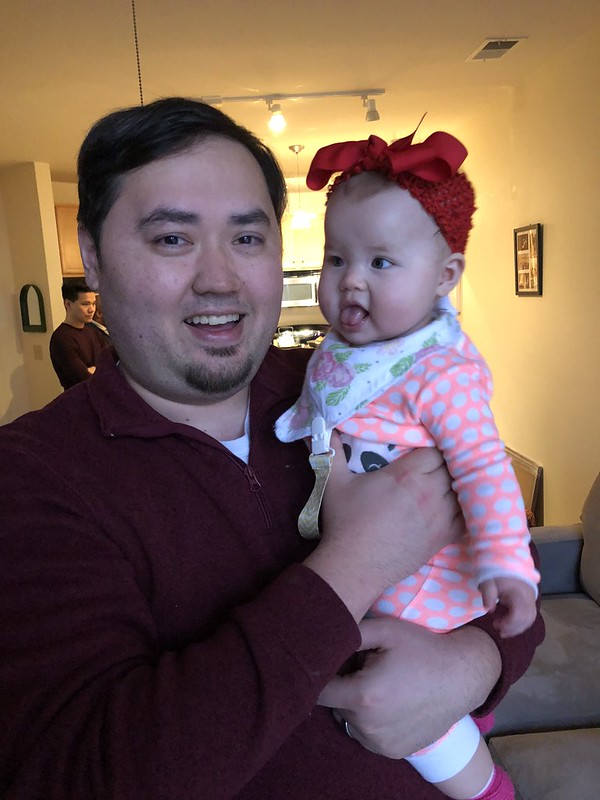 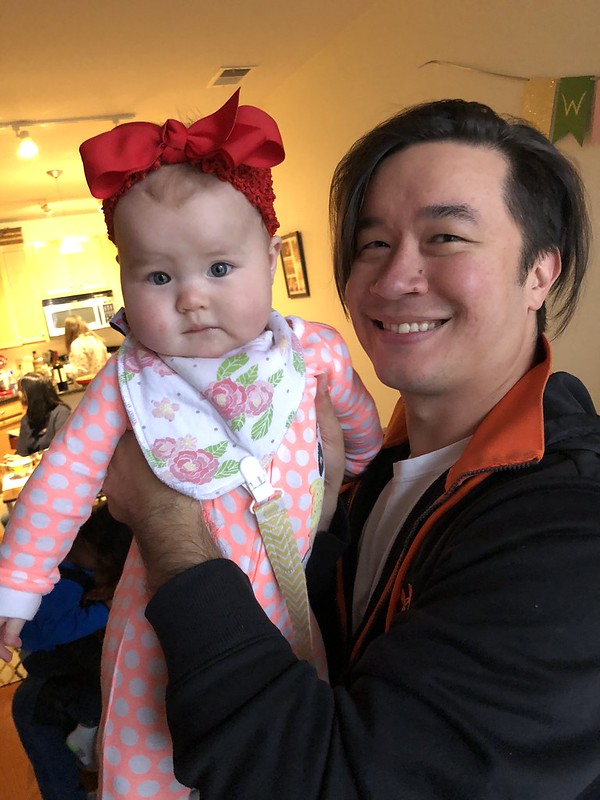 Uncle Ben was there too. 🙂 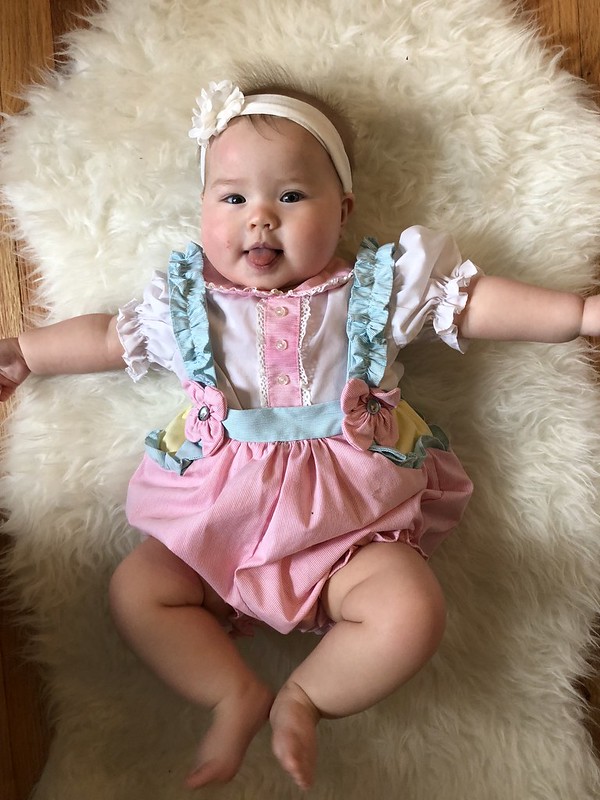 On the Penelope front, she has continued to show off her mastery of sleeping all night long — she’s in her crib for 11 to 12 hours now! Getting her to go to sleep at the beginning of the night is still a bit of a crapshoot: sometimes she’ll nod off as soon as her head hits the matters, and will be fast asleep by the time I even walk back upstairs, lol. But sometimes she fusses and cries for a bit before she finally goes down for the night. I never know which way it’s gonna go, lol, so I guess at least it keeps things interesting?

Usually it doesn’t last more than a couple of minutes, but every now and then she’ll go on for a pretty lengthy spell. She’ll go through this cycle of nodding off for like, 20 seconds, then waking up and wailing for a few minutes. Then she’ll pop her pacifier back in, close her eyes again… and two minutes later, wake up crying again. It’s so weird!

Anyway, the first few nights she went through this cycle, we’d go in and check on her to make sure she hadn’t pooped, try to comfort her, etc. But honestly, us going in there only seemed to make her more upset… unless we picked her up, and then she’d just get extra pissed the second I tried to lay her back down, lol. So now we try to just let her figure it out on her own. It’s hard (who loves hearing their baby cry??) but she’s amazing at finding her pacifiers, and is clearly is capable of soothing herself back to sleep. Once she gets over the initial hurdle at the beginning of the night, she’s down for the count! She hardly ever wakes up in the middle of the night anymore, and when she does, she’s able to get herself back to sleep swiftly. It’s amazing! Her naps are still sad, short little things (it’s hard to get her to nap longer than 40-ish minutes), but I am definitely not complaining on the sleep front right now. Not until the next regression at least… hehe.

In addition to enjoying somewhat restful nights (I can’t seem to help myself from waking up at least once in the middle of the night, just to check on her via the monitor, heh), it’s also been really fun lately to see Penny take an interest in the dogs — at last! 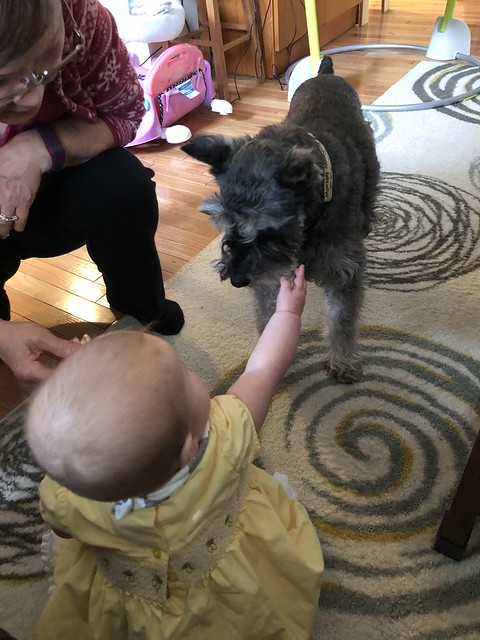 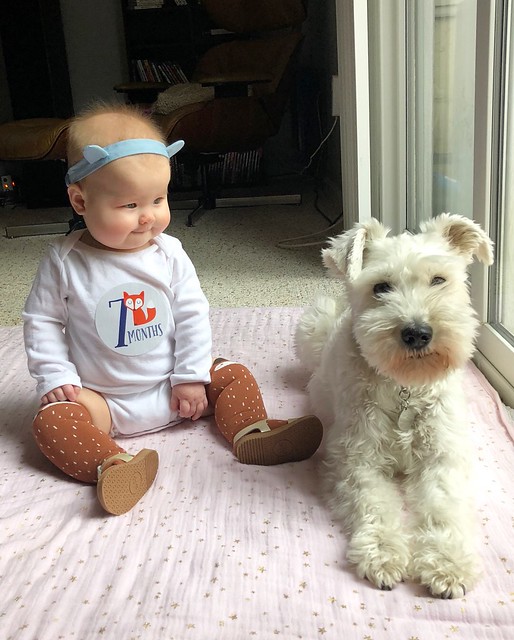 They are still mostly indifferent to her (as they have been since we brought her home), but Daxter no longer goes scurrying from the room whenever she starts making noise, and Harry has actually started approaching her on his own more and more! She certainly seems to have started paying more attention to them — it’s very sweet. We’re trying to teach her how to be gentle and to pet them (since her grabbing their fur is probably not a great way to foster goodwill with them) and so far it’s going well! It also probably doesn’t hurt that ever since Penny’s now a source of treats since she started eating puffs and rice crackers, hahaha. 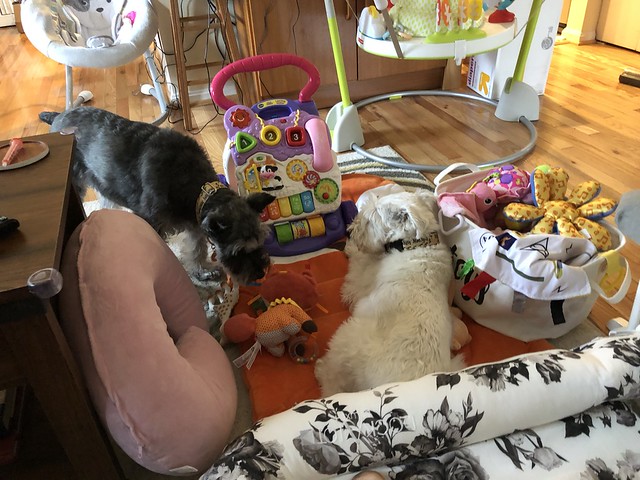 And as always, they certainly love her stuff! We’re lucky that our lazy boys are not super into toys, otherwise I’m sure we’d be dealing with a lot of chewed up teethers and destroyed stuffies. I think I may have mentioned before that I was a little nervous about how integrating Penny into the dogs’ lives would go, since Daxter had been known to display some jealous behavior towards my nieces in the past. But fortunately, that’s been a total non-issue! I feel very lucky that the biggest issue we have currently is Daxter waking up Penny from her naps when he barks, haha.

Anyway, that just about brings us up to speed! This is an exciting week since Wednesday is…. my 30th birthday! I’ll be going out to dinner with my family to celebrate (my sister’s coming back into town!), and then partying down this weekend with a 90s themed bash. Since this might very well be the last birthday party I’ll ever throw, I hope it’s a good’n! But until then, I’ve got quite a lot on my plate work-wise, so sayonara for now, and see you on the flipside!