Hello there! Or, should I say, welcome aboard!

Last night I helped out my fabulous coworker (and the Yelp DC Community Manager) Kimberly at Yelp’s Jet Set Fête, a Mad Man-era travel-themed explosion of local businesses and amazing times. I won’t bore you with too many details (just check out the link above if you want to find out more!), but suffice it to say that Kimberly definitely out-did herself on this one!

As always, it was a bit of a family affair, not only because I was there working with my entire DMV Yelp Family/Flight Crew, but because my own family got to join in on the fun! Both my dad and my sister-in-law are members of the Yelp Elite Squad, and my whole fam really brought their A-game outfit-wise, hehe.

This week is actually a bit of a madhouse event-wise. Kimberly’s big Yelper Party was on Tuesday, tonight I have an Elite Event of my own (at a pottery studio! I’m so excited!), and Friday is a double-header with meeting a visiting coworker for lunch and then attending the James Beard Taste America Dinner (!!) that night. I know, I know, my life is really hard.

Obviously I lovelovelove getting to host and attend such awesome events, but hopefully none of you are rolling your eyes too heavily when I say that it can also be a bit draining. I am definitely what I would consider to be a social and extroverted person most of the time, but even so, being constantly “on” can be hard to keep up night after night!

Which is why I think I tend to go in kind of the opposite direction on those nights that I do have to myself. You know, nothing but laying on the couch bra-free, catching up on missed TV, a couple of schnauzers in my lap? Hehe.

Fortunately, while it would also be oh-so-easy just to order pizza or Chinese on these nights, I have been doing pretty well with upping my cooking game lately. Last night’s night “off,” in fact, led to the creation of a pretty spectacular feast, if I do say so myself! 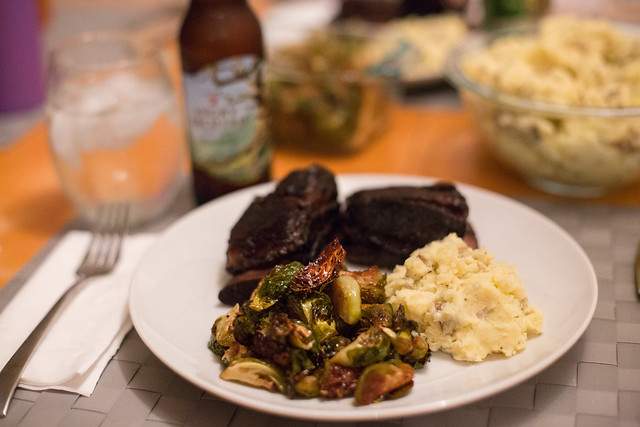 Sean’s pomegranate short ribs that he’s been sous vide-ing for days (no, seriously, they’ve been cooking for two whole days! Crazy!) were finally ready, so I whipped up a couple of sides to go alongside ’em. 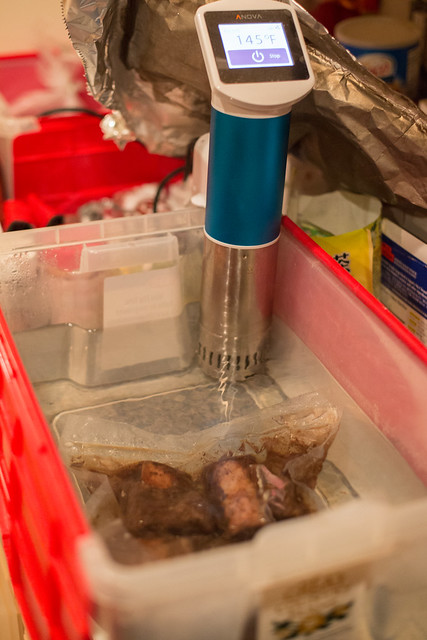 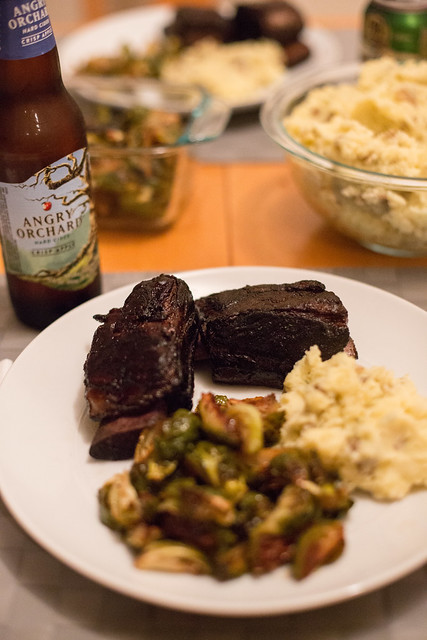 I whipped up some mashed potatoes (well, smashed potatoes, since I was too lazy to peel them, haha) with a little bit of butter, sour cream, and some spices, and maple roasted brussels sprouts, too! 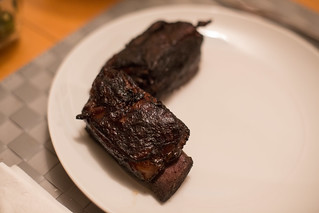 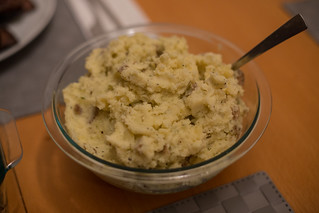 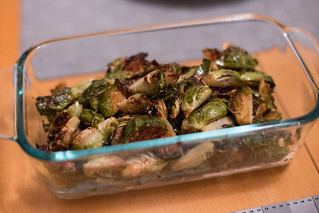 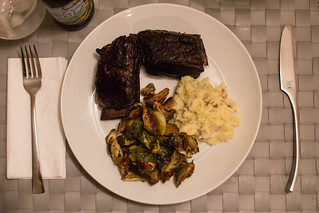 Now, I’m no stranger to cooking brussels sprouts. I love ’em! I mean, I’m not kidding when I say that I can easily take down an entire pound of roasted b.sprouts in a single sitting. Of course, I try not to do that often as they are a particularly, er, fibrous veggie, but still. It’s happened. 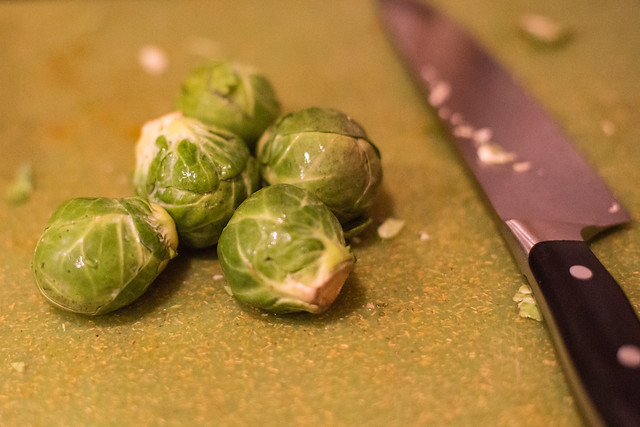 What can I say? Those little baby cabbages rule my world. I did do something a smidge different this time, though, that I ended up being very happy with.

See, normally I go through the process of cutting the stem off of the bottom of every single sprout, before halving them. While this method completely eliminates the possibility of biting into an undercooked (and thus, bitter), stem part, it’s very time consuming and also results in lots of the little leaves of each sprout flaking off and potentially burning.

So this time, I simply quartered each sprout, stem on! By doing it this way, they stayed intact, and they also cooked faster AND I got even more of all the delicious caramelized browned bits, which are obviously the very best part. 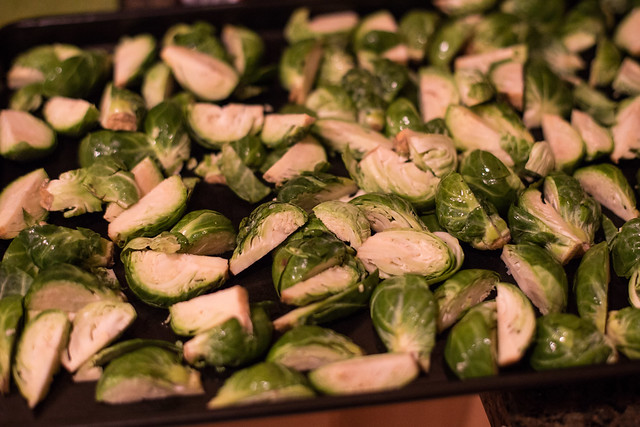 For this “recipe” (I use that word loosely, since I use zero measurements and pretty much just wing it every time I roast brussels sprouts), I tossed them in olive oil, salt and pepper, and some maple syrup. Just make sure everything is coated evenly, spread them into a single layer on a baking sheet, and pop ’em into the oven at 375* for about 30-minutes! If you’re impatient, you can do 400* instead, just make sure you keep an eye on them. 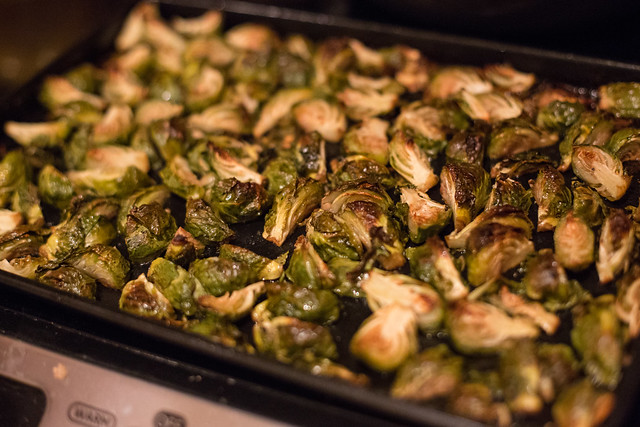 Before long, you’ll have an entire baking sheet full of deliciousness! Of course, roasting the sprouts with maple syrup is super delicious, but they are just as good done plain with just oil, salt, and pepper, or maybe adding a little brown sugar in there instead. Also, adding bacon is always, ALWAYS an excellent idea. There’s just something about bacon and everything brussels sprouts that goes so well together.

Anyway, that covers my latest cooking creation. See, nobody has an excuse not to eat brussels sprouts, because now you know just how easy it is! And I say, if you think you don’t like b.sprouts, it’s just because you haven’t had ’em done RIGHT. So just let me know if that’s the case, and you’ll come over and I’ll cook them for you, and you’ll be converted, k?

As mentioned, tonight I’m hosting an event at a pottery studio, so send me lots of good, Ghost-y vibes in the hopes that I end up creating something magical (slash actually worth sharing with you), and I’ll see you soon!