Talent. Strengths. Passion. Career. I know I’ve been waxing on and on about this stuff for a while, so depending on how you’ve felt about it in the past, I imagine you will be either delighted or disappointed to read the following. See, in my current quest to figure out not only WHAT I want to do (which, as you will probably be shocked to hear, is NOT to be stuck in a cubicle for the rest of my natural-born-life), but also HOW I’m supposed to do the things I want to do in a fiscally responsible, not-gonna-move-back-in-with-my-parents kinda way, I’ve done some thinking. Go figure. And while my recent revelations may cause some of you to be like, “Uh, duh?”, I’m going to talk about them anyway. Probably in a fairly nonsensical and stream-of-consciousness kind of way. Because I can. Thbbbt. 😉 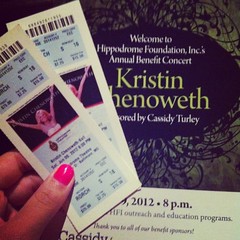 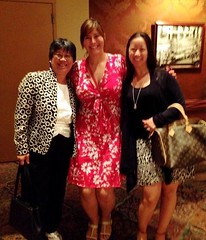 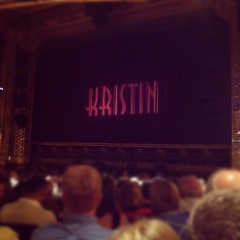 It actually all started when I attended the Kristin Chenoweth concert a couple weeks ago. In between beautifully-sung songs and anecdotes about how her mom accidentally (but continuously) calls Fuddrucker’s “Mudf*cker’s”, she also told us quite a few stories from her pre-celebrity days. She talked about what it was like to be little and to have her first solo in church, performing and getting her first role on Broadway and as she spoke, there was no false modesty. She didn’t fish for complements, or underplay her talent. She is, and apparently always was, an absolutely incredible singer. We know it. She knows it. And why wouldn’t she? I mean, how annoying would it be if she were to say something like, “Well, I can sing fairly well, I guess…”? I’d want to smack all 4’11” of her. Hearing her talk about herself that way didn’t make me think she was conceited or immodest, even though in everyday life, my first instinct would be to mark someone as such if they were doing the same thing.

So obviously the rules that apply to celebrities don’t necessarily apply to us regular folk, it’s true. I mean, hello? Lindsay Lohan is still getting work. Wtf. Regardless, the whole experience still sparked something that I thought deserved a little thought. Our society of polite interaction and political-correctness puts a premium on modesty. You might be extremely talented, but you’re not supposed to be the one saying “I’m a gifted artist!” or “I’m a great writer!” or “I’ve got a fantastic voice!” No, that would be bragging. Society tells us that validation is supposed to come from other people. And eventually, even if we start out believing in our own abilities, it is still discouraging not to be able to tout our own strengths. Having to rely on the validation of others’ opinions gives self-doubt a lot of wiggle room.

I feel like that doubt is what ultimately prevents us from pursuing the things that we really want. Take me, for example: I want to write. I think I know that I’m a good writer. With drive and perseverance, I might even be great someday. But I don’t feel like I can really say that. What I CAN say is, “I love to write,” or “I’m passionate about writing.” It feels conceited to even think, let alone say, otherwise. Even if my intentions are correct (though, let’s be honest, when are they ever really? Haha), it still feels like bragging. So I rely on other people instead. And when their comments don’t come, or when they’re not what I want to hear, or when I’m not constantly showered with reassurance, the doubt crawls back in. I start to think, “I’ll never make it as a writer, why bother trying?” And then the mental battle ensues once again.

This applies to more than just creative talent, of course. How many of us that are on the weight loss track didn’t really feel like you were making any progress until you started to get comments and compliments from others? I lost THIRTY pounds before I started getting regular comments from people I knew, and thus it wasn’t until I was thirty pounds into my weight loss that I felt that I had succeeded. But before I lost 30, I had lost 25. And before that, I had lost 20. And so on, and so forth. Shouldn’t I have felt proud about those accomplishments, too? That thought never even occurred to me. It was only “Well, I guess I need to keep going because nobody’s noticing.” I probably fall victim to this line of thinking more than the average person, I’m sure, because I have a long and sordid history with my self-esteem. Some of you might be reading this and want to roll your eyes, chalking up my feelings to my own self-worth issues. That’s a fair reaction, although I do honestly think it goes beyond that. I can’t possibly be the only one who feels this way, after all. 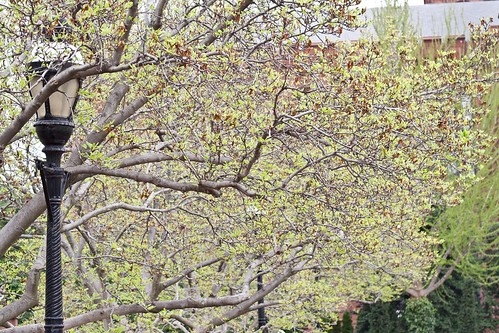 I don’t have an answer for how to really fight against this way of thinking. I’d like to be able to say it’s as simple as coming up with a mantra that you repeat as you fall asleep, or sticking a Post-It to your computer screen, or writing on your mirror in lipstick, all to remind yourself that you’re awesome! You’re amazing! You’re a rockstar! But c’mon. That doesn’t exactly tackle the root of the problem, does it? I want to be able to get to a place where I don’t NEED a constant visual reminder to acknowledge that I’m good at something. That I’m possibly — GASP! — fantastic at something. And, perhaps most importantly, I don’t want to feel guilty about thinking that way when I do.