We’ve had eleven weeks (as of yesterday) with our little cutie pie! She continues to love falling asleep in the car, being held like she’s sitting, baths, and getting her nose booped. She continues to dislike falling asleep on her own, idling in the car (she is one cranky monkey if she’s still awake when we hit a stoplight, lol), and the jury’s still out on whether she actually likes being carried in her baby carrier (Lillebaby) or wrap (Baby K’Tan). 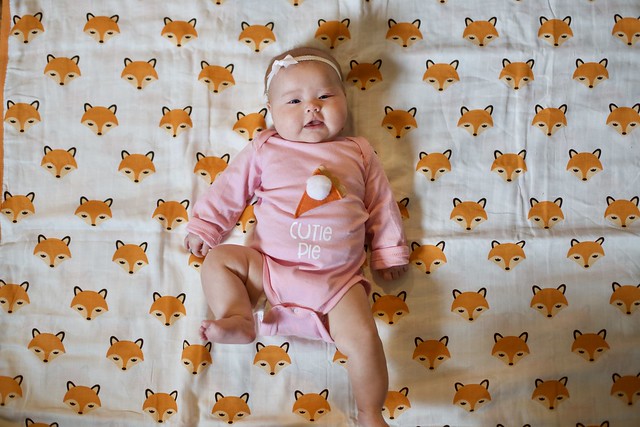 In exciting developments, Penny loves gummin’ on her fist now, staying awake for much longer periods of time, flapping her hands in the general direction of toys, and she can finally (finally!) keep a pacifier in her mouth unassisted for more than 5 seconds at a time! 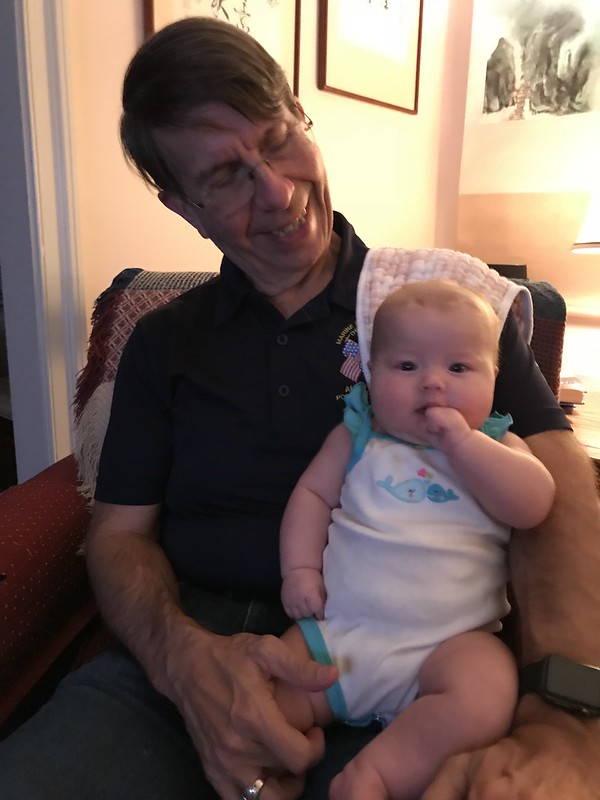 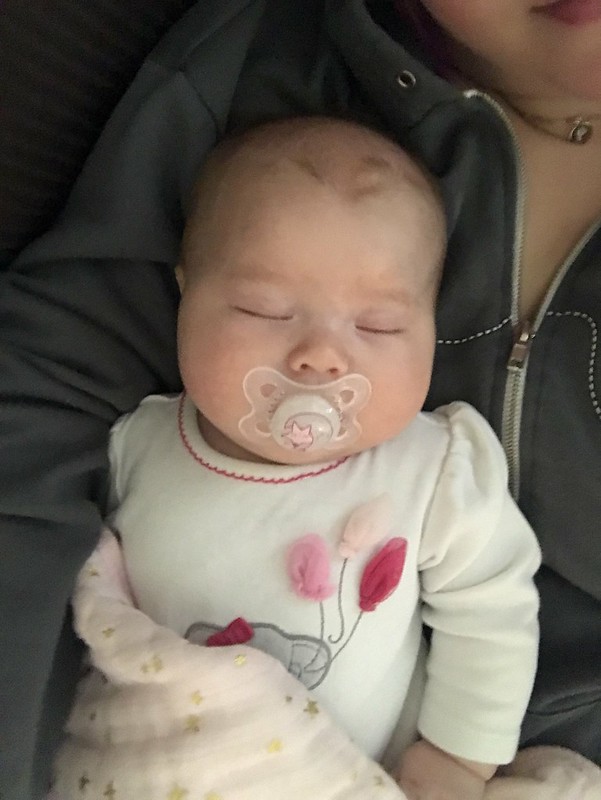 Even better, the pacifier she’s taken to lately is the 0-6 month MAM with the cute graphic on the front, hehe. She still likes the Soothies, but since she’s extra terrible at keeping it in her mouth (even the Wubbanub with the cute little stuffed animal attached), I’m glad that another type is working at last. 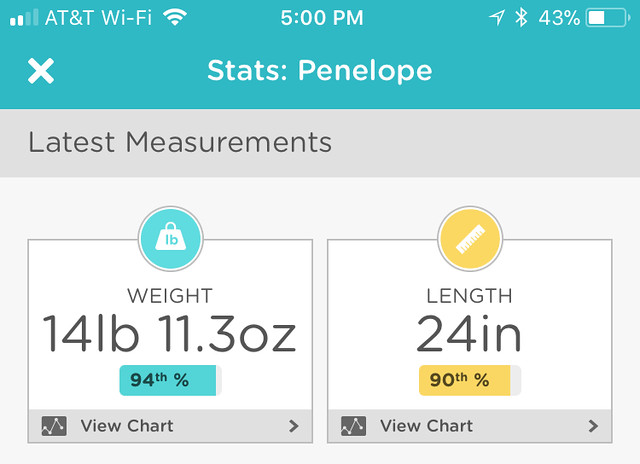 She continues to grow at an astronomical rate — she weighed 14 pounds, 11 ounces and 24 inches long on Sunday, which puts her in the 94th and 90th percentile respectively. So proud of my chunky little monster. 🙂

All this really means, of course, is that I’m extra motivated to try and get her into all her various adorable outfits and onesies I’ve at least once before she grows out of them, haha. I never thought that having too much clothing would be an issue, but I’m starting to feel bad that she’s outgrowing things before she can even wear them! I know, I know, #firstworldmomprobs. 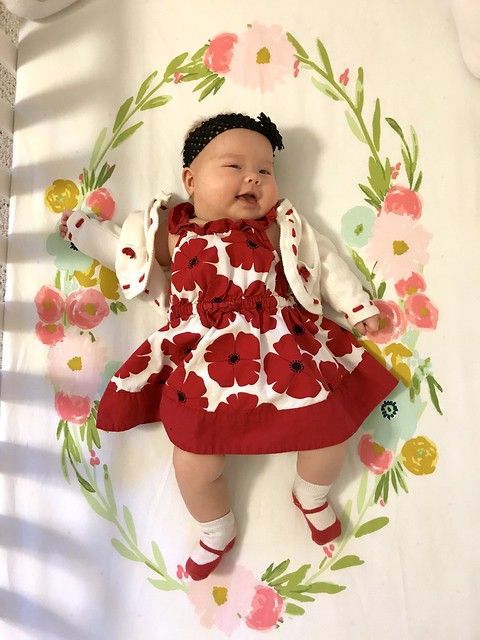 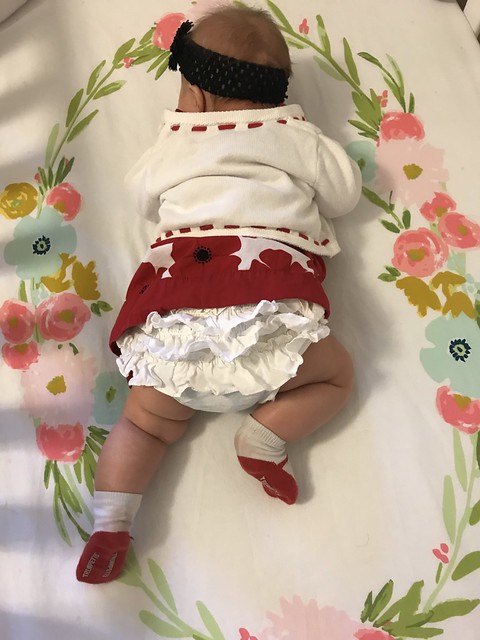 Monday’s car accident aside, things are pretty steady on the homefront. It took a little bit of time for her sleep to get back to normal after getting her two-month shots (whatever normal is for a less-than-three-month-old, that is), but she was getting back in the rhythm of sleeping a longer 4+ hour stretch, followed by a few shorter bouts each night, equaling out to a good amount of total sleep overall (and going back to sleep quickly in between after waking to eat). Until yesterday, that is, when she decided that sleep was for chumps and would only sleep for somewhere between 25 – 45 minutes at a time, day AND night. IT WAS REALLY FUN FOR ME I TELL YOU.

This kid was just so flipping AWAKE last night! No amount of rocking, swinging, shhh-ing, swaddling, unswaddling, bouncing, singing, or nursing seemed to make her want to go to sleep. Around midnight, after her diaper was changed (again) and she was fed (again), with still no sleep in sight, I just dumped her in her crib. I figured that if she was going to fuss and cry and yell anyway, she might as well get used to her crib while doing it. 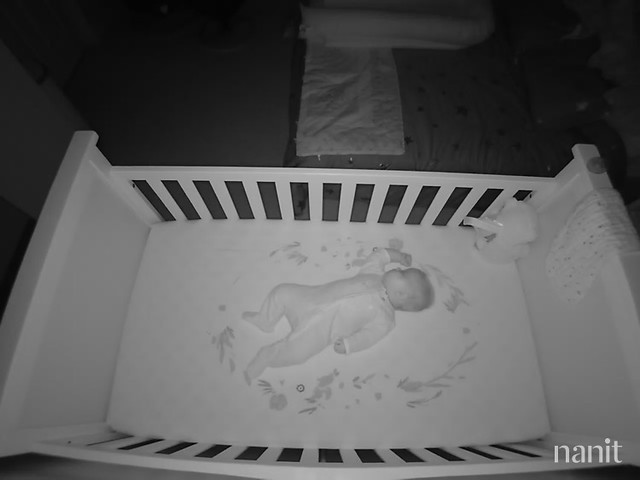 She squirmed and fussed for 20 minutes (not really crying, more like just yelling) or so until — amazingly! — she fell asleep. Unfortunately, that first round of sleep lasted exactly 26 minutes. She then did start crying and did so for like 15 minutes (while I stared at her on the monitor, also crying because whyyyyyyyy), but fell asleep again and then slept for 3.5 hours!

I didn’t really get to take advantage of that stretch of sleep though, since I was anxious about the fact that she was sleeping alone in her nursery for the first time (especially since this wasn’t planned, lol), and was glued to the monitor all night. Aaaaand then after her first real wake up around 4 to nurse, I slept the rest of the night in the bed that’s in her room. Thank goodness for espresso.

Despite my exhaustion, at least I’m feeling optimistic about the fact that she was able to sleep in her crib, and fall asleep on her own. I mean, I guess she had to exhaust herself eventually… But now the question is, should I try putting her down in her crib again tonight? I know consistency is important when it comes to establishing a good sleep routine, but also it’s not exactly like I want to be “sleep training” her yet. And we’ll be traveling next week, so I don’t know if it’ll be ultimately detrimental to get her officially started on sleeping in the nursery now, only to disrupt it so soon?

Then again, I’m probably (definitely) overthinking this, since she IS only 11 weeks old and still has the memory span of an earthworm. My main goal at this point is still just to do whatever works to get her to frickin’ sleep. And hopefully the ridiculous barely-napping-at-all thing from yesterday will be short-lived (maybe she’s going through her next developmental leap a little early?) 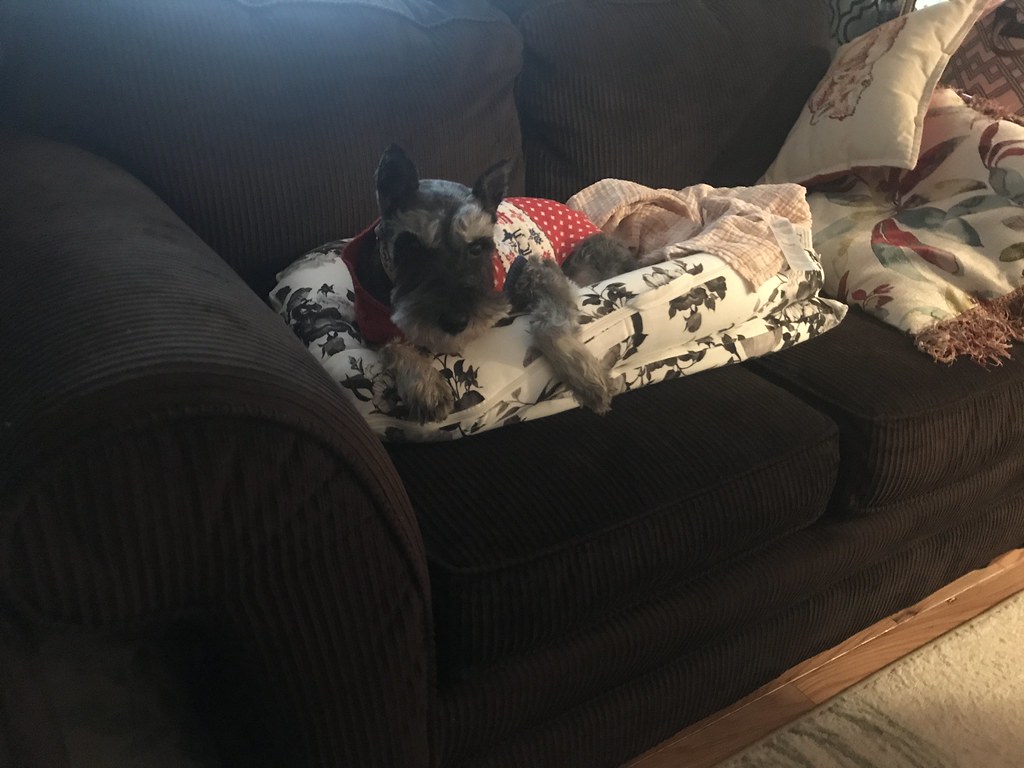 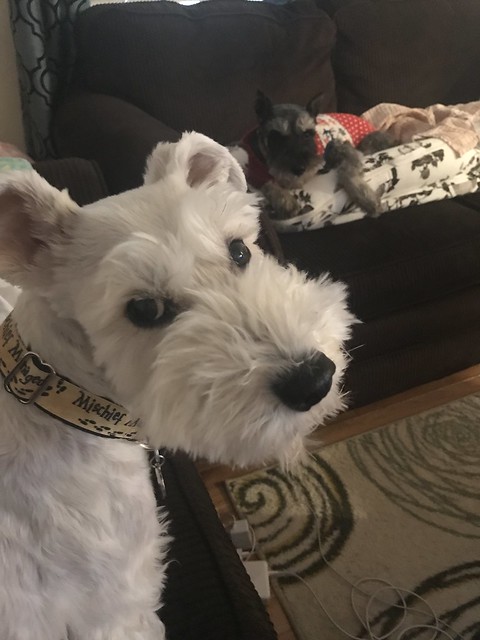 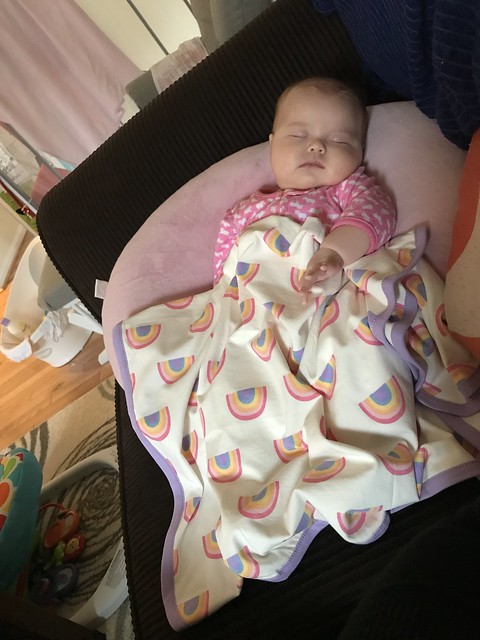 Anyway, this week I’m both glad and grateful that I’m using PTO to extend my maternity leave into December. My company provides 12 weeks of paid maternity leave, which I know is already really great compared to what most moms in the US get, but the idea of going back to work next week still seems so crazy to me! She’s just so young, and there’s still so little regularity or routine to our day. I guess that, were my return to work looming, I would be more motivated to sleep train or at least get her on a schedule, but for right now I’m A-OK with continuing to try keeping my head above the water and enjoying the rest of this time I have with her. 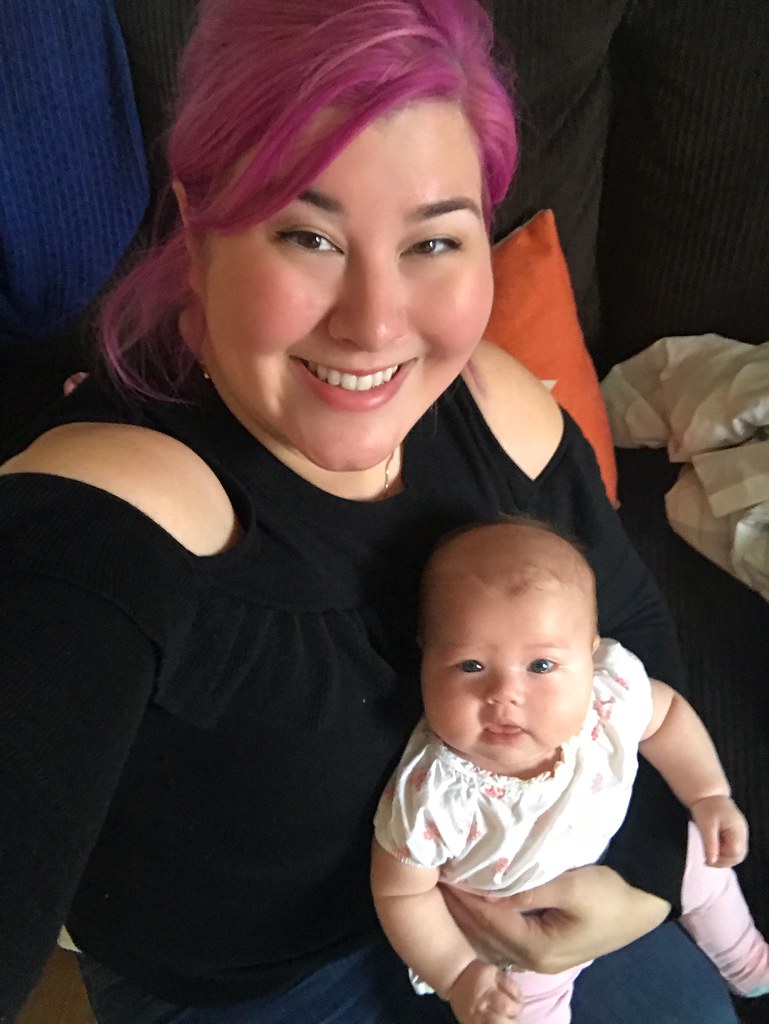 After all, the HOLIDAYS are officially upon us! The red cups are out at Starbucks, Santa’s taken up residence at all the local malls, and Penny will be experiencing her first Thanksgiving next week. Yay! As mentioned above, we’ve got some travel coming up — Sean and I are taking her to Texas for Turkey Day this year to celebrate with the whole Fox family (another reason why I’m not really fretting about the whole schedule establishment thing, since traveling is likely to wreak havoc on any progress we make anyway), and I have her My First Thanksgiving outfits ready and rarin’ to go, hehe.

This weekend we’re also taking her to Williamsburg for a quick trip to introduce her to Sean’s other grandmother, and to see my college bestie Bethany & her littles. I’m also hoping to get Ben & Taylor to snap some photos of our little family that I can use for a holiday card (doggos included, of course!). ‘Til then…!