Well, I hope that you’re all caught up with Sunday’s episode of Game of Thrones, and if you’re not, what in the Seven Kingdoms are you doing on the internet?! Get out of here! No, but seriously, GoT is pretty much the one show where you just cannot afford not to watch it live if you really care about spoilers. To be clear, I’m not putting any spoilers out there myself rn, I’m just offering this as a general observation and Game of Thrones fangirl. I just feel like I’ve read so many interweb comments today about how spoilers have ruined folks’ lives, and well, shouldn’t they know better?

Anyway, now that I’ve dived headfirst into this post with a random non sequitur (hey, I’m still getting my blogging legs back, okay?), let’s talk Monday! Yesterday started off with a vet visit for Harry & Daxter to  get their annual checkups, shots, and whatnot. They’re both still healthy as, well, as miniature schnauzers, since that’s what they are. And despite Harry getting on in years and Daxter being literally the most accident-prone dog to ever exist, they both passed with flying colors. High five!

Sidenote: Anyone living in the Burke/Springfield area who might be looking for a vet, I highly, HIGHLY recommend Dr. Alt at Burke Veterinary Clinic. He’s the bee’s knees. Second sidenote: are you impressed that I finally figured out how to make my own gifs? Let’s hope Daxter gets internet-famous! 😉

After the vet it was back home to do some work, then off for some blissful “me time” as I went and got a massage. Then back to the house again to cuddle with my vaccine-booster-laden animals and work some more, before heading out into what ended up being a ridonkulous thunderstorm to meet the lovely Anne for dinner! 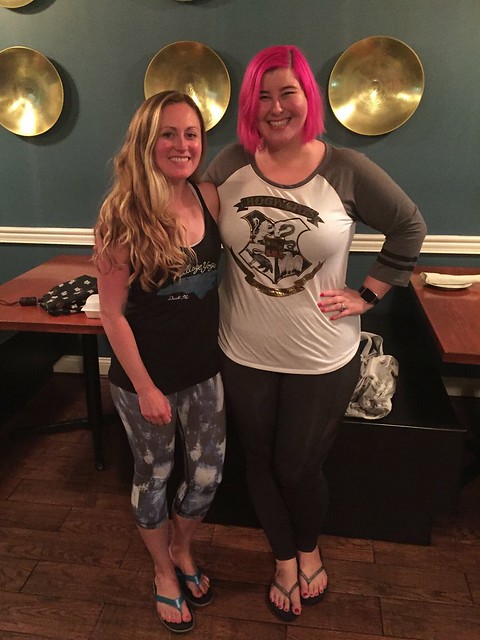 We went to Yayla Bistro for dinner, which had been on my bookmarks list for-freaking-ever (4.5 star average on Yelp!) and it did not disappoint. It’s a Turkish/Lebanese mezze-style restaurant, and everything we ordered was seriously delicious. 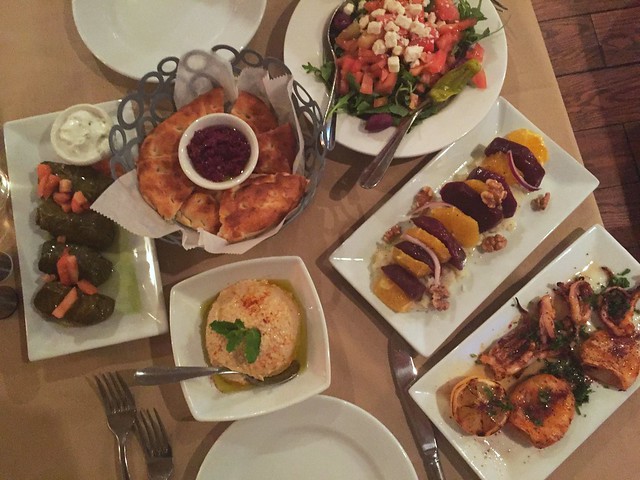 We got a smorgasbord of Mediterranean treats, including hummus (duh), dolmas (huge and outstanding!), a beet & orange salad (served over potato salad mmmm), and grilled squid (SO good.) We also got kofte, which was super flavorful ,and Anne ordered an arugala salad. Plus they brought out bread with house-made olive tapenade. We did a pretty good job tackling the feast, though I do have a small box of leftovers to dig into tomorrow, hehe.

In an exciting turn of events (if “exciting” really means “awkwarrrrrrd”), we get to the end of the meal and… turns out I’d forgotten my wallet at home. Not. Kidding. It was literally the first time this had ever happened to me, and I felt terrible! Thank goodness for Anne being a far more responsible adult than me, or I’d have had to ask if this adorable little locally-owned restaurant accepted Apple Pay. I mean, obviously I shot Anne some digital cashola on the spot to pay her back for my half of the meal, but still, ::cringe::

I was also super paranoid driving home from the restaurant because I was suddenly so aware that I didn’t have my license on me! Guess that’ll teach me to leave my wallet lying around at home. Sorry again, Annie Bananie, but thanks for the great evening! I should have given you my leftovers as penance. <3

Aaaaand, that catches us up to today! As you’re reading this, I’m probably at the dermatologist’s office getting a bump on my noggin looked at. I suspect it’s a pilar cyst, but hopefully I’ll find out more tomorrow! And with that, I’ll stop talking about it, because we’re probably pretty close to venturing into TMI territory. And as I suspect most of you are not as interested in dermatological issues as I am (I actually watch Dr. Pimple Popper’s videos on Youtube like, all the time. She is awesome and the human body is weeeeeeird), I’ll keep the rest of the dermo-chatter to a minimum for now.

Have an awesome Tuesday, and I’ll be back tomorrow with my first “official” weigh-in of the (weight loss) season. Yipes!