Well, I’ve messed up like seven different forms by signing the wrong year on the signature line, so it really must a new year, huh? Happy 2018! If you’re on the East Coast, I hope you’re staying WARM — the temperatures have been insanely low this past week! Like, lows of 5 and 6 degrees Fahrenheit. Brrrr! At least it’s giving me a chance to show off Penny’s clutch winter wardrobe.

I used to live in Canada, so you’d think that I’d be a tough nut when it comes to below-freezing temps, but I guess my body has simply forgotten what it used to go through every winter, because I’ve been shivering a-plenty over the past few days. 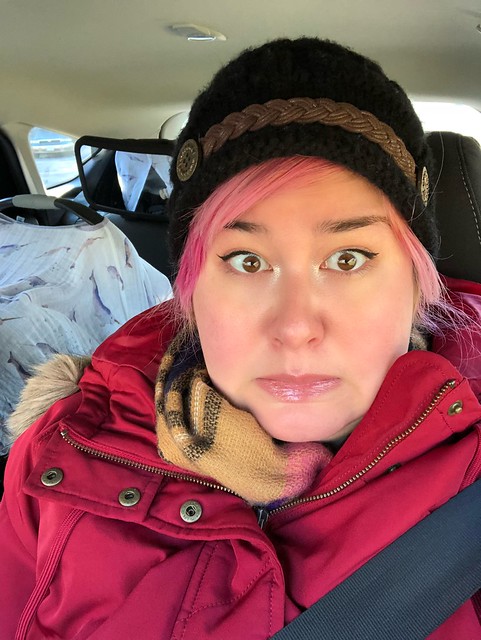 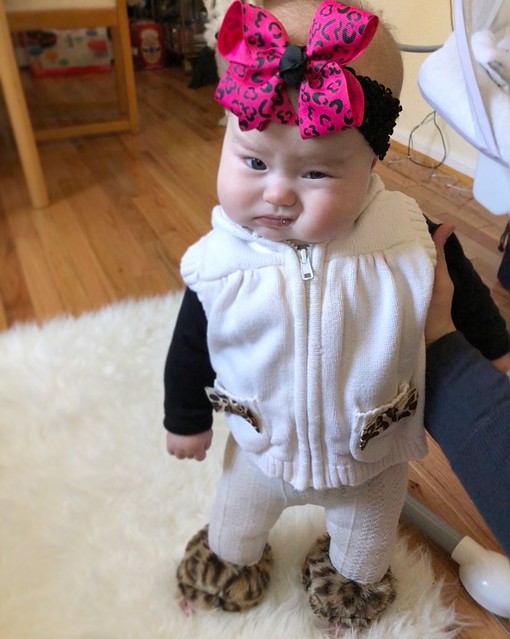 Penny be like: It’s HOW cold outside?!
It’s kinda like how my body also conveniently forgot what it was to wake up every 2-3 hours at night with a crying baby, even though that was my life just a few short months ago. Oh, but DON’T WORRY. Penny has been thoughtfully reminding me of what it was like each night this week. We are definitely still in the throes of the dreaded four-month sleep regression, and with the exception of the night after she got her four-month vaccine shots (when she slept for eight glorious hours straight), every night for the past week has been a wild & crazy ride of constant night wakings. ::cry:: ::yawn::

Honestly, the waking every few hours isn’t even the hardest part, really. Not compared to how hard it’s been the past two nights in trying to get her to go to sleep. We were in a really good rhythm of being able to put her to bed awake, pop in her pacifier, and she’d drift off all on her own. Weeeeell, last night in particular was ROUGH. I’m hoping it was just a particularly bad fluke of a night, but hot damn, I’ve never heard her scream and squeal and cry the way that she was last night as Sean tried to get her to go to sleep. I ended up having to nurse her down. It really is just like old times!

I’m tentatively hopeful that now that she’s had a few days past receiving her shots, and also since my sister and her family returned home to Georgia last week (which is sad but at least should help me get Penny back to her regular nighttime routine since I won’t be spending like 92% of my time at my parents’ house, lol), that things will start to get back to “normal.” Whatever normal is. 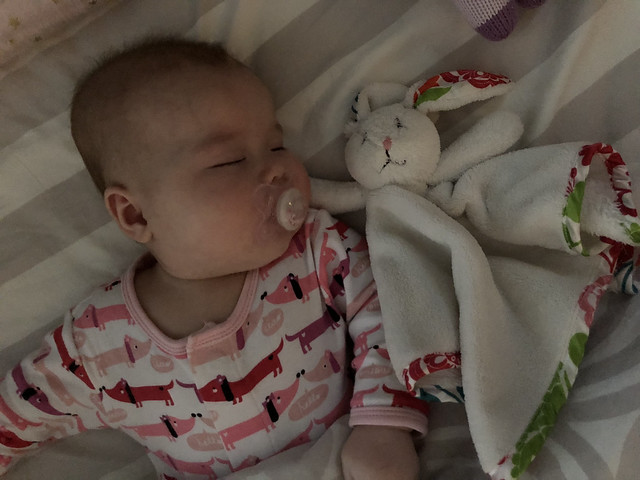 But then again, she is only four months old, and she is still going through Leap 4, and she is, well, a baby. So there really is no such thing as normal right now, is there? We’ve been talking about transitioning her into her own room soon-ish, but I’m not sure it’s a good idea to start anything new while she’s still regressing (or is it regressed?). Plus, I’m like, weirdly obsessed with my kid, and selfishly I still like having her close by at night… even if she is waking me up every few hours.

For a while we had been kind of successful starting her in her crib at night, and then moving her back up to our room after she woke up the first time, (ahhh, the good old days when that wouldn’t be for a good five or six hours…) but it’s been a minute since we’ve done that. So right now I’m just trying to reacquaint her with her crib for the occasional nap, and we’ll see how things go from there. 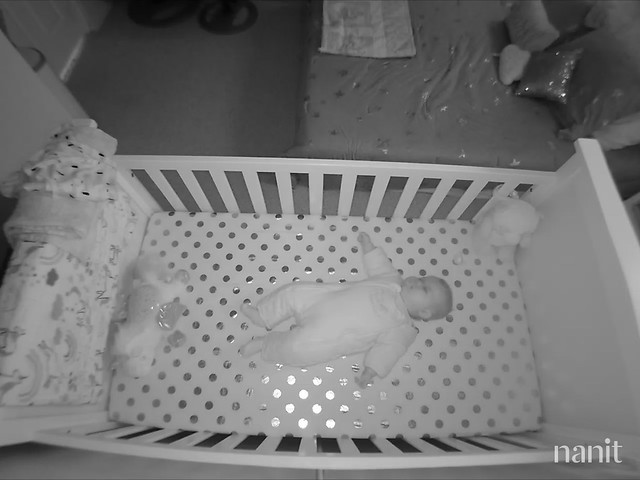 ANYWAY. I swear I did not set out to have this entire post be about my lack of sleep. I actually had a very different, and very specific topic in mind: my post-baby health & weight loss plans! Though it may be hard to believe, I didn’t always blog solely about my kid, I swear. If you followed me before I got pregnant, you might remember that once upon a memory, I used to blog quite a lot about food, healthy living, and weight loss. In fact, I started blogging all those years ago (over SEVEN years ago, in fact!) with the explicit intention of losing weight.

And lost weight, I did! With the accountability that this blog provided, and the support I received from all of you, I managed to successfully lose exactly 60 pounds, going from 246 pounds to 186 pounds. I felt good, healthy, and strong at that weight, but for some reason, had it in my head that I needed to lose just a little bit more… but didn’t. And when my weight loss kept stalling out, when I started getting complacent, and when I stopped keeping track of what I was eating and how active I was being… I slid back. And the pounds slipped back on.

I’ve tried kickstarting my weight loss again… and again… and again… with varying degrees of success in the years since. Ten pounds here, twenty there… but nothing too significant and definitely nothing lasting ever came out of it. The pounds always came back on, because I always stopped trying, and life kept happening anyway — I fell in love with a great guy, got a job that I really love, I got married, I got pregnant, and I had a baby that I love, like, an insane, insane amount. And my weight just, I dunno, stopped mattering. Which, to be fair, isn’t necessarily a bad thing, since I’ve spent time in the darkness of the other side where I’ve cared much too much, too.

So yeah, for the first time in my adult life, I can honestly say that I don’t really care that much about how much I weigh right now. I mean, sure, I don’t love the way I look in some photos, but generally, I’m, like, happy with my body? It’s weird to actually say that. It’s especially baffling because — spoiler alert — I’m actually at one of my highest weights ever. I’m heavier than I was 7 years ago when I first started this blog, that’s for sure. And yet, miraculously, I’m in this, like, really good headspace with regard to my body. Funny how growing an actual human being inside you changes your self-perception and body image, isn’t it? 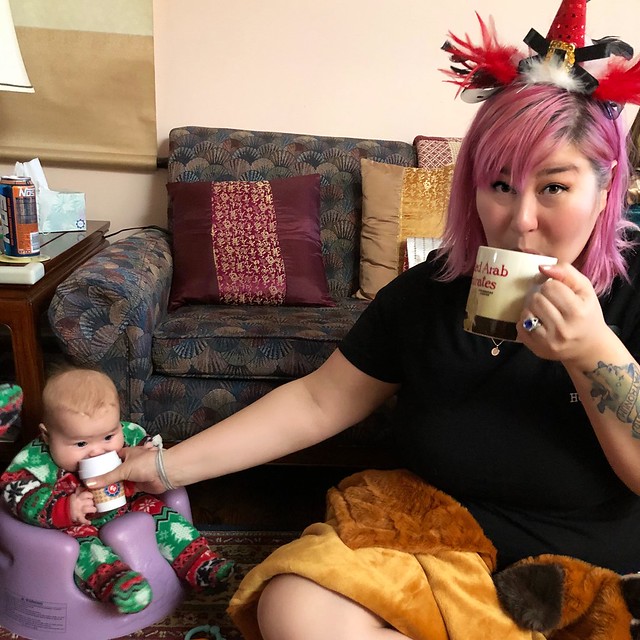 Now, that said, the fact that I don’t actively loathe my body at this weight doesn’t mean I’, oblivious to the fact that it’s not healthy either. For the past few months, my lifestyle has become particularly unhealthy. Penny, obviously, takes up a lot of time, and less time means I’ve become accustomed to prioritizing convenience — eating out, ordering in, and drive-thrus — over health. And I hardly think I even need to mention my activity level — y’all can guess where that’s at. Aside from the daily workout I get carrying my 16 1/2 lb baby all over the house, I literally cannot remember the last time I worked out. It was before I got pregnant, I’m pretty sure. So, we’re talking about at least a year? Minimum? Yeesh.

And like, okay, I’m a new mom, right? Having given birth four months ago is, I feel, actually a pretty legitimate excuse for having a little (or, okay, a lot of) extra cushioning. Except, as you may know, I barely gained any weight during my actual pregnancy. I mean, obviously I was overweight when I started, and then I was sick for the first half of my pregnancy, and then Penny took up so much space inside me that my appetite was basically nil for the last third of it. So I waddled into the hospital at 37 weeks having gained like, 5 pounds. Lol. 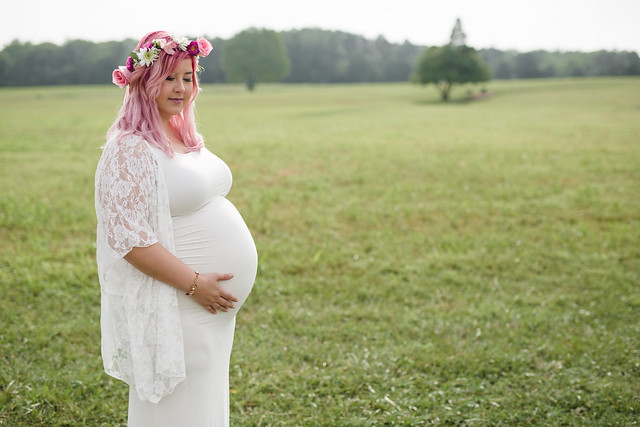 I did have a secret hope that I’d lose weight from breastfeeding — and since I hadn’t really gained much “baby weight,” I was really hoping that nursing would be the easy weight loss solution I’d been searching for my whole life! But, alas, while many moms do shed the poundage when breastfeeding, I’m clearly not one of them. Nursing may burn extra calories, but it also has made me hungrier than I’ve ever been in my entire life. And between the ravenous ragebeast that is my hunger these days, and all the previously mentioned not-so-healthy lifestyle habits, the weight isn’t exactly falling off.

Alas, I packed on these pounds myself the regular way — by eating too much and moving too little. Giving birth to my daughter really had nothing to do with that part. But has everything to do with this next part.

Because that’s really the whole point, isn’t it? I need to — and want to — do this for Penelope. I want to be my healthiest self so that I don’t have to worry about being strong enough to carry her as she grows even bigger. So I can keep up with her when she starts to run and jump and play. And so she has a strong, happy, confident mom setting a good example for what it means to lead a healthy, balanced life. 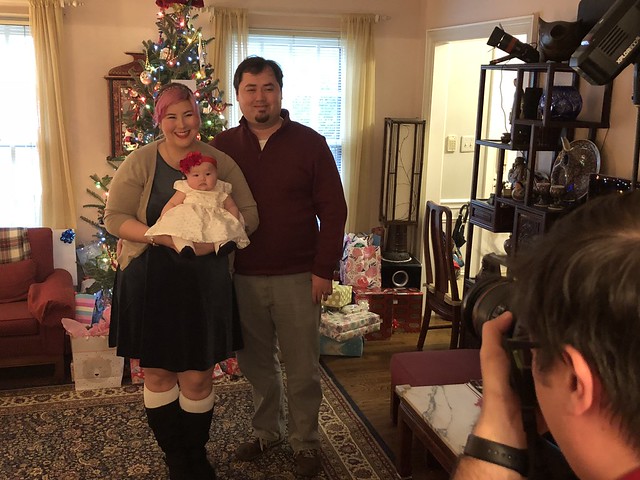 So, here I am, jumping back onto the weight loss train for granted, like, the 50th time. And I know, I know, I’ve said before that “it feels different this time” or whatever. But it really DOES feel different this time. I mean, first of all, Penny, y’know, exists this time. Secondly, this was not motivated by some knee jerk reaction to seeing an unflattering photo or not being able to fit into a certain size, like some of my past attempts were. And lastly, I really am trying to set myself up for success right from the get-go by utilizing new tools and strategies to help me reach my goals.

Sean and I both love to cook, but often find ourselves uninspired in terms of what to make and what to buy at the grocery store. So we started getting Blue Apron meals to encourage us to cook more at home. And I signed up for Noom, which is a personalized weight loss coaching app that’s supposed to provide support in a way similar to programs like Weight Watchers. I’ve only been at it for a few days so far, so I’ll report more on how it’s going as time goes on (it’s subscription based, and there’s a free two-week trial period that I’m in right now.) But if you’re curious to try Noom as well, just leave a comment saying so and I can send you a link that gives you 50% off if you sign up and end up wanting to actually subscribe.

If your eyes haven’t completely rolled into the back of your head from the sheer wordcount of this post, congratulations! The tl;dr version is that I’m ready to reprioritize my health and losing some weight is a big part of that.

I have an initial goal of getting back down to 220 pounds, but am more focused on adopting healthier habits, cleaning up my eating, and increasing my activity level (slowly, however, as I’m sadly still dealing with some issues from my car accident back in November) than on a goal weight at this moment. And because I am still nursing, and limiting caloric intake can affect milk supply, I know that this may go slowly as I don’t really want to cut calories right now. Honestly, though, with how much I’ve been eating lately, simply tracking my food alone has already led to positive change. I’ve lost 4 pounds!

So here’s to 2018, to Penny, and to being our healthiest, happiest selves! Let’s do this.