Oh man, week 15 is here and the belly has started to become a force all its own these days! During the day, it’s still pretty tame, but by day’s end, it is poppin’ somethin’ fierce! Guess that’s what happens when you already have a nice squishy belly on top of baby to begin with, eh? Plus, by the end of the day, my stomach muscles are just like, “Boy, bye!” which makes it pop out all the more. Super crazy.

Being slightly more zaftig than some, I was unsure about how my pregnancy would “show” (or whether it would at all!) One of my biggest fears has been that since I already had quite a bit of belly to start with, nobody would be able to tell that I’m pregnant until I’m just about ready to give birth. But, much like my friend Cassie described when she went through this same thing, it seems like I’ll be having the opposite problem. Evidently my normal-stomach is just compounding with my pregnancy-belly and creating some kind of crazy ultra-bump, and so I actually feel like I’m showing much earlier than I anticipated!

I still think I’m straddling the line between “pregnant or fat?” most days, but I mean, I’m only 15 weeks and, depending on what I’m wearing and how late in the day it is (see photos below), I personally think I look preeeeetty knocked up. Give it a couple more weeks, and I’m sure it’ll grow quickly outta control, lol. 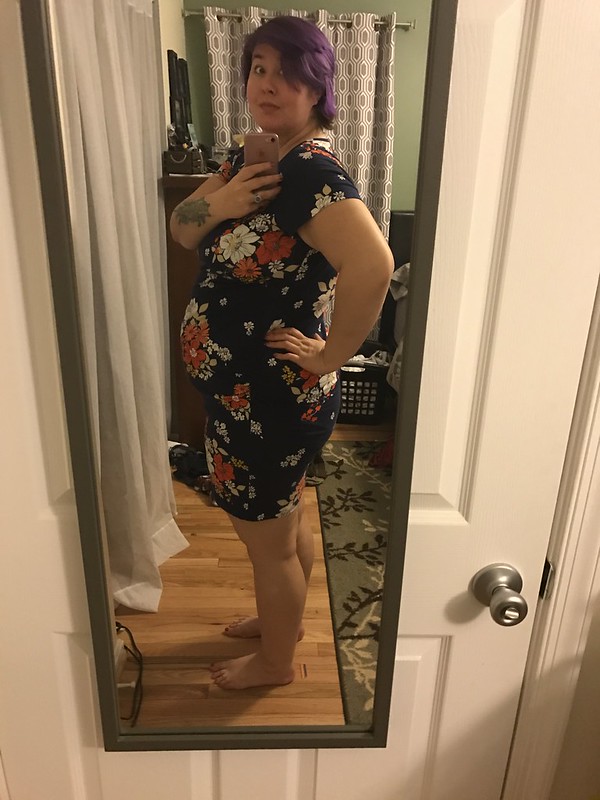 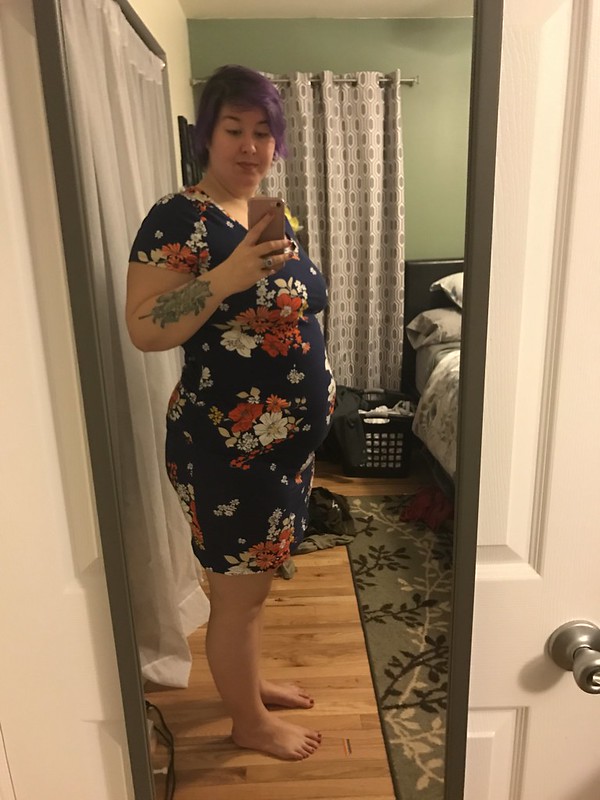 What I’m wearing is a pretty big factor, I think. All my high-waisted leggings tend to keep my bump sucked in/smoothed down a bit more (see below), while dresses and under-the-bump shorts seem to emphasize it (see above.) Anyway, on with the update! 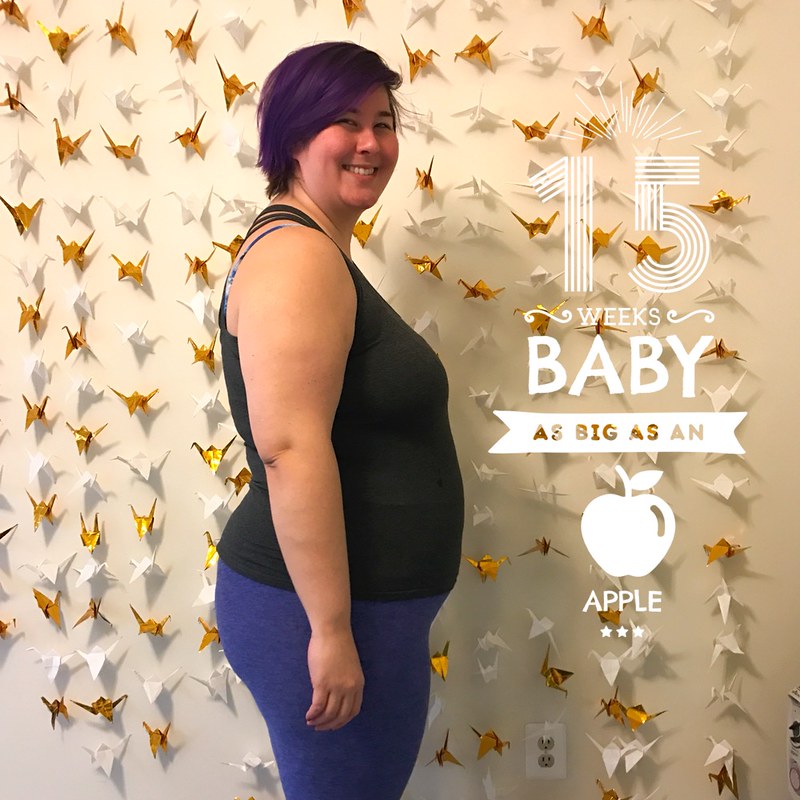 Foxlet’s Size: Foxlet is the size of an apple, éclair, or a naval orange!

Weight Gained: Nothing new here. Still negative fifteen-ish pounds. I still can’t get over how much my body shape has already changed, and how much extra girth has gone to my stomach (and boobs, lol) given that not only have I not gained any new weight, but have actually lost weight since getting knocked up! I don’t really feel like the rest of me looks much different, but my mom told me the other day that my face seemed slimmer so maybe it is being pulled from other places? Whatever, I’ll continue to take what I can get before major pregnancy weight gain sets in (as I am sure it will before long.)

Symptoms: Ughhhh, my booooooobs. They are large, super tender, and are very in charge. I feel like they weigh a bazillion pounds! I also am feeling the effects of pregnancy brain in full-force. I lose my train of thought super easily, and am definitely more forgetful than usual. I’ve also been experiencing some pelvic-area pain — sometimes sharp, sometimes more like a kind of stretching feeling It mainly happens if I move too quickly when going from laying/sitting to standing, or twist my torso.

Toss in renewed full-body exhaustion, and the unfortunate return of some skin issues (though fortunately not as bad as before!), and I’d say I’m still not feeling that #pregnancyglow people keep telling me about, hahaha.

Nausea-wise, I’m continuing to feel like I’m on the up and up, so that’s some good news! Although, that being said, I also feel like every time I say I’m coming out of this phase, I jinx it and that very evening I end up throwing up again. Sooooo, I’ll just cautiously say that I have been feeling a smidge better, and am hopeful that this trend continues.

Emotions: I’ve been re-watching Charmed on Netflix and burst into tears basically every other episode, so make of that what you will. I also came home from dinner with my family last night and inexplicably burst into tears as soon as I saw Sean.

Cravings: Cravings are actually starting to become a reality! HUZZAH!! This week I had one very intense craving for watermelon, and am happy to say that my aversion to potatoes is officially over. And thank goodness, too, because I don’t know how I would have survived this pregnancy without french fries. I’ve also had a specific thirst for both almond milk and orange juice for the past few weeks. Maybe I’m calcium and Vitamin C deficient? I’m just happy that certain foods are starting to actively sound good again!

As for what I’m eating otherwise, I continue being able to enjoy eating bagels + cream cheese, grapes and cheese, apples and peanut butter, beans and rice, etc. It’s not the most exciting diet, but my limited library of edible foods means that I’ve actually been eating relatively healthfully, so that’s good. And eating mainly snack-type foods means I’m generally eating smaller meals more frequently, which I think is also helping keep the nausea at bay.

Aversions: The usual: marinara sauce, meat, and as a new joyful surprise, while I don’t feel like I have a mental aversion, apparently I’m having a very strong physical aversion to bananas. I don’t mind the idea of eating them, but every banana I’ve tried to eat recently has been immediately regurgitated soooo, I think I’m done with that.

Sleep: Aw man, I’m so tired all the time right now! I’ve been sleeping laaaate and still feeling suuuuuper exhausted when I wake. I remain eternally grateful that I have a flexible, work-from-home job and are not slave to an office schedule right now, because I think I’d be rocking some serious keyboard-face if I had to go into an office these days.

Wearing: I’ve officially broken into my maternity clothes as of this week. I’m actually super glad that I picked up some items from Old Navy and Target a couple weeks ago, because it means that I already had some things to wear as soon as I started feeling like the belly was taking charge. I’ve also gotten down to just one wearable pre-pregnancy bra, so I bit the bullet and bought a new bra, two cup sizes bigger. I kept it to just one though, since I have no way of knowing how much more these puppies are gonna expand, but I’m guessing it’s gonna be more.

Missing… not running out of breath so easily! I swear, whether it’s because of my increased blood volume, pressure on my pelvis, or whatever the cause, just walking around H&M at the mall leaves me short of breath these days. It’s kind of embarrassing, to be honest. Shopping really is my cardio right now, I guess.

Looking Forward to… FINDING OUT IF I’M HAVING A GIRL OR A BOY. Ugh, I’m DYINGGGGG to know! I was doing okay last week but these past few days have been rooooough. Pretty sure I’m gonna cave by Week 16 and have to find out early, lol. I swear, I’m trying to be patient but, I mean, I was already one of the least-patient people I knew before getting pregnant sooooooooo…