Yesterday, I ran 5 miles. And I only threw up in my mouth a tiny bit afterward! Aren’t you proud of me?! 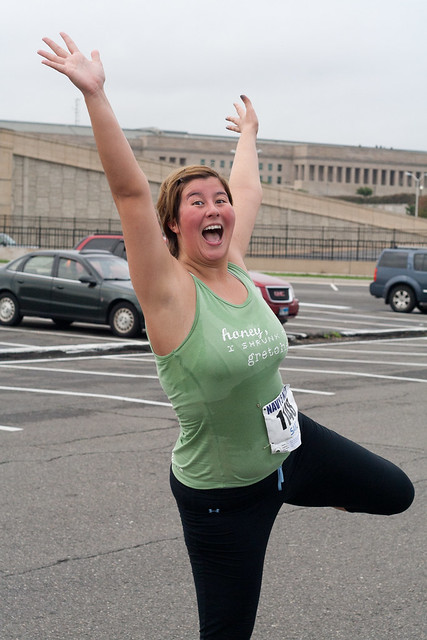 I did it! And the ludicrous amount of sweat on my body proves it!

I am so proud of myself for doing it: no excuses, no injuries, and tons of complaining. So proud, in fact, I don’t even care that I have approximately 6.3 chins in the above picture! I was so nervous about the Navy 5 Miler that I actually dreamt about the race the night before (second-worst dream ever. #1 is a story for another time, hahaha.) You may have even tuned into my pre-run freaking out on Twitter or Facebook, haha. 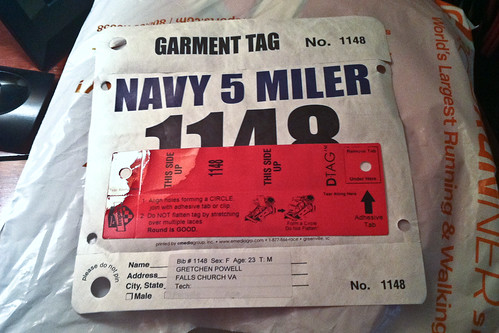 Due to my extreme lack of actual training, I was worried that I wouldn’t be able to finish the distance within the allotted time (90 minutes, or a 15 min/mile average pace.) Which to those of you who have run or are training for 10 milers, half-marathons, or marathons, probably sounds ridiculous. But for those of us with a, er, rather tumultuous relationship with running (or exercise in general), it felt like a pretty realistic fear! 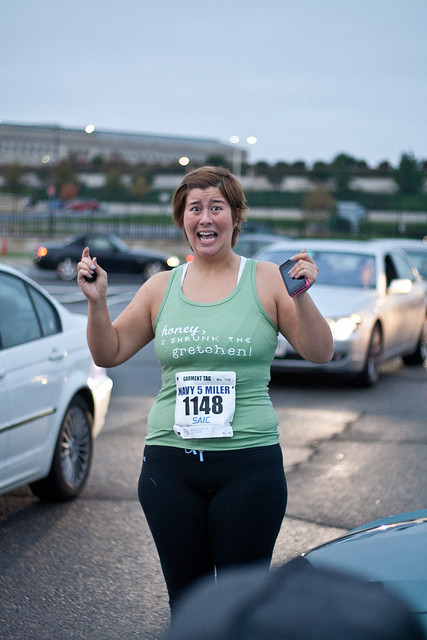 That sentiment didn’t change a whole lot when we got there, but I tried to rally. After all, in for a penny, in for a pound, right? (What an apt saying for this blog, haha.) 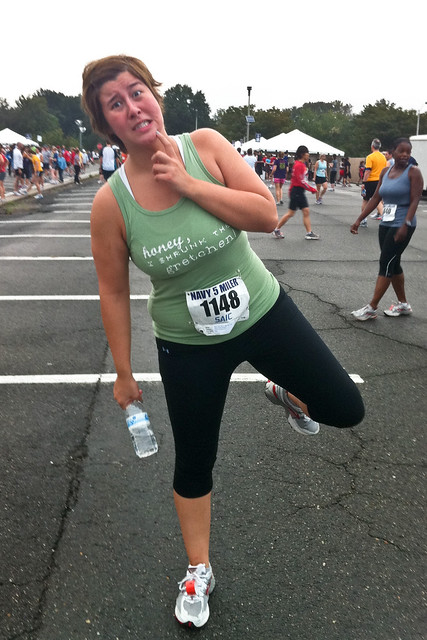 Unfortunately seeing all of crazy buff ex-military personnel (it was the Navy 5 miler, after all!) didn’t do too much to quell my fears. These runners be CRAZY: the male winner finished the race in 26:23. THAT IS RIDICULOUS. 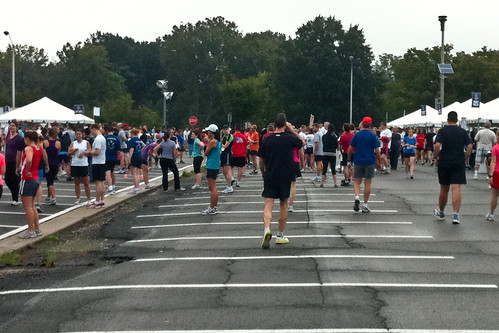 It was a good thing I had these two kiddos there to help me maintain the modicum of sanity I have: 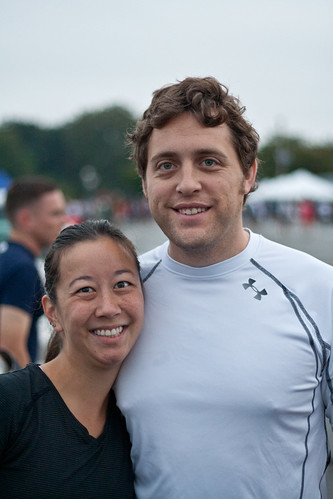 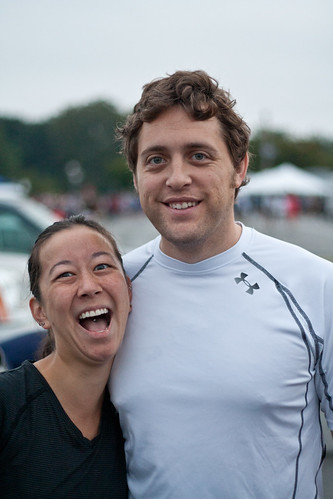 My sister very generously offered to run the race with me, as she has for my previous races, but I let her run with her hubs. They obviously smoked me, but then circled back after they had finished to run with me to the end. Talk about motivation! I couldn’t exactly complain about having to run the last half mile when they were tacking on extra mileage themselves just for me! 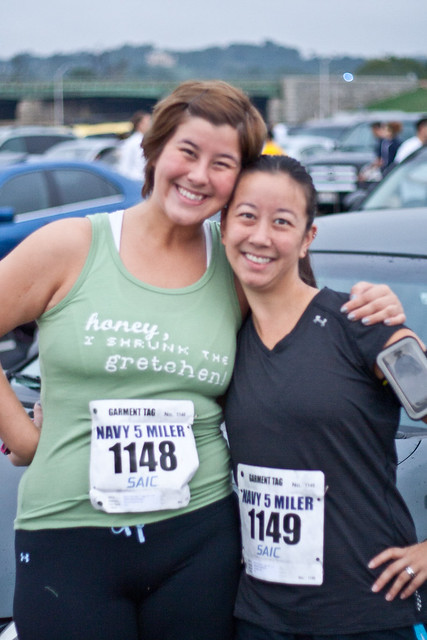 I managed to find myself a couple of running buddies anyway. We bumped into my sister’s boss at the starting line, and she kept me company and at a really good pace (11:30 – 12:00) for the first mile or so. Unfortunately, as we looped back past the starting area (where the portapotties were) I realized that I had to, you know, “go”. And if I didn’t go now, it’d be another 4 miles before I could (no bueno.) So I had to bid her adieu and make a little pitstop. Lucky for me, it wasn’t long before I met Jill on the road, who actually asked me about the Honey, I Shrunk the Gretchen! shirt I was wearing! We ran/speedwalked the entire rest of the race together, setting personal distance records for both of us! Whoooo! 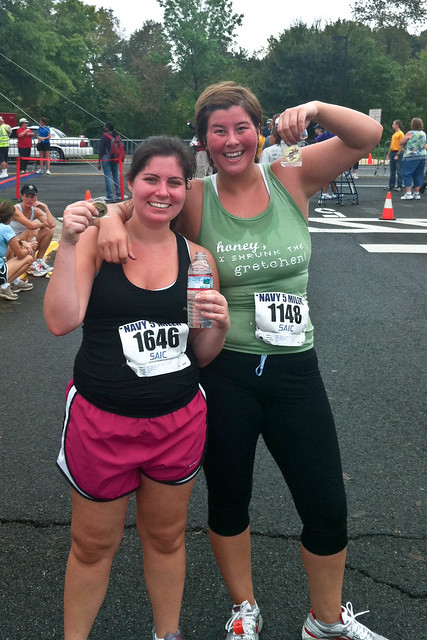 Please ignore the deranged look on my face in the photo above. I’m just amazed I’m still standing, haha. I finished strong and sweaty, full-out sprinting the last tenth of a mile at a pace so fast, I was really sure I would trip over my feet and break my face. Luckily, the only thing that broke was my gag reflex. At least it got the attention of the MC – he called out my name as I crossed the finish line! 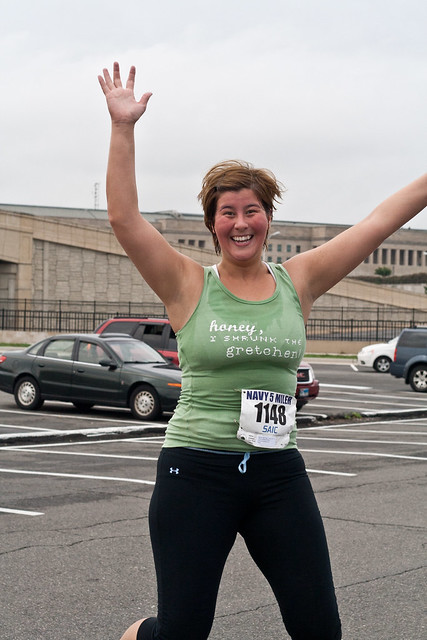 Though I clearly didn’t have quite the energy leftover necessary for a successful jump shot, haha.

After proving that I would not, in fact, pass out, I quickly hightailed it (well, as quickly as I was physically able at this point) to the food stands. NOURISH ME! 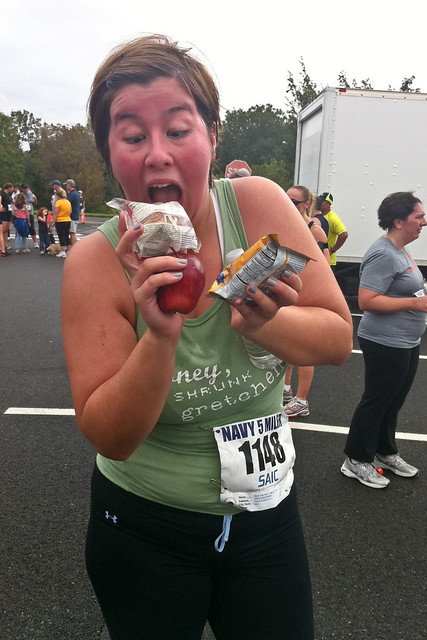 One apple and peanut butter cookie later (not to mention an entire bottle of water – half for rinsing the salty sweat out of my eyes, hahaha), we were on our way home. A pre-packaged, processed cookie has never tasted so good! I also may or may not have pilfered a couple of extra apples, bananas, and muffins for later… shhh. 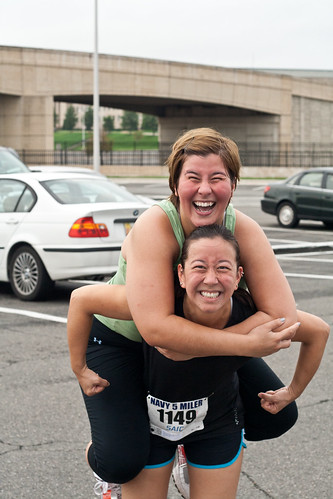 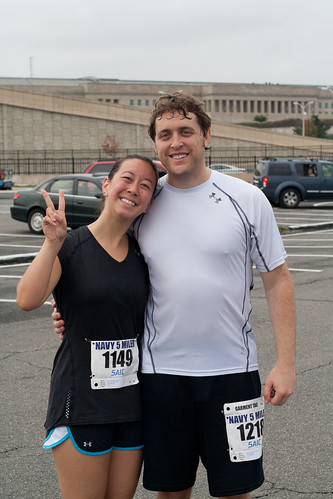 After expelling all of my energy on the road (holy crap I was so tired!), the only true way to refuel was with… brunch! Off the whole family went to the 4 P’s for their brunch buffet. It was the first time I had ever been there for brunch, and it was pretty rockin’! Everything from smoked salmon (my loooove!) to shepherd’s pie. Nom nommity nom. 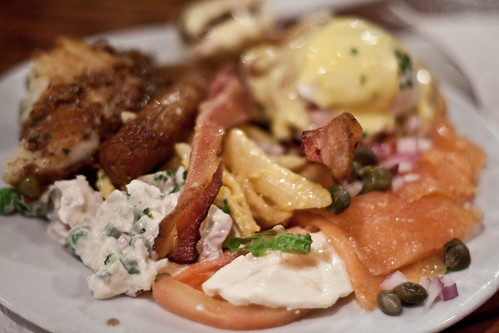 Don’t worry, my second plate had some fruit on it. 😉

I gotta say, in spite of all my moaning and groaning about the race, running, and exercise in general, I feel really accomplished having done this. I completed 5 miles with an official time of 1:09:53 (in my mind I’m cutting off a few minutes for my bathroom detour though, hahaha) and an average pace of in the high 13s, which is actually faster than my first 5K that I jogged completely! Racing is a very addictive thing. Not that I’m really “racing” per se, but you know, the crowd, the excitement, the cheering – it’s fun! I was swearing up and down just yesterday that I’ll never sign up for another race again but… I’m definitely going to have to think about it. With a quote I picked up from my good friend Lara:

Why do I keep hitting myself with a hammer? Because it feels so good when it stops.

What are you proud of for accomplishing lately? Let’s try to collectively lift our spirits on this drab Monday!