Hiya folks! Well, I’m back from Minneapolis with a belly full of delicious food and a brain full of blogging inspiration. Ahhh, just like old times!

There was a lot of picture-taking (photobooths FTW!), a lot of hugs of friends I haven’t seen since, well, last year’s HLS, and lots of delicious food. I actually made the conscious choice to leave my big DSLR at home this time, since in past years I’ve had such a focus on taking pictures, editing them, and posting blog posts DURING the conference. And since I wanted to be able to really enjoy the summit (and the folks I was summiting with!), I opted for the good ol’ iPhone instead.

I still think we ended up with some pretty cute pics, don’t you? 😉

Lauren, who I’ve missed SO much since she moved from this area out to Colorado earlier this year, and Cassie, who I CANNOT BELIEVE I HADN’T PHYSICALLY MET BEFORE SINCE WE ARE LIKE SISTERS OMG TRUTHFACT, stuck together for much of the conference, getting to meet and mingle with so many of our fellow bloggers as we did.

Photo thanks to Mindy

I’m sure many of you have already gone through dozens of HLS recaps, so I’ll keep this one brief. There was an awesome dinner the first night at Town Hall Brewery the first night that Casey put together, followed by the traditional cocktail party, and then Saturday kicked off with the sessions!

For those of you who weren’t able to attend, or who missed the presentation by Cassie, Lauren, and me, please feel free to check out the slides and recaps of the presentation. Here are a bunch of links for ya:

– The most beautiful slides in the world, by none other than the amazing Cassie Johnston

– Sam’s liveblog of the session

I’m also happy to answer any questions you might have on utilizing your personal blog to help transform your career path! (Feel free to check out the hashtag #HLS13BlogtoJob to see what other kinds of questions we’ve already had, too!)

So as I mentioned before, I also participated in a book club centered around my very own bookchild, TERRA! It was awesome getting to discuss the book in person with so many people who’d read it (and enjoyed it, or so they said ;)) and I totally felt like pretty baller when I was signing copies, hehehe.

Photo thanks to Alicia

It was an awesome weekend, over ENTIRELY too soon, but thankfully I have eighty zillion various food samples and products to keep the memories alive… until I eat them all. Sidebar: Have you guys tried the Salt & Vinegar Blue Diamond Almonds yet?! CRAAAAACK ALMONDS!!! THEY ARE SO GOOD.

Thanks for another great weekend, HLS!

By this time tomorrow, I’ll be on my way to sunny (?) Minneapolis for the 2013 Healthy Living Summit! This year marks my third year at the Summit, and my second year speaking. 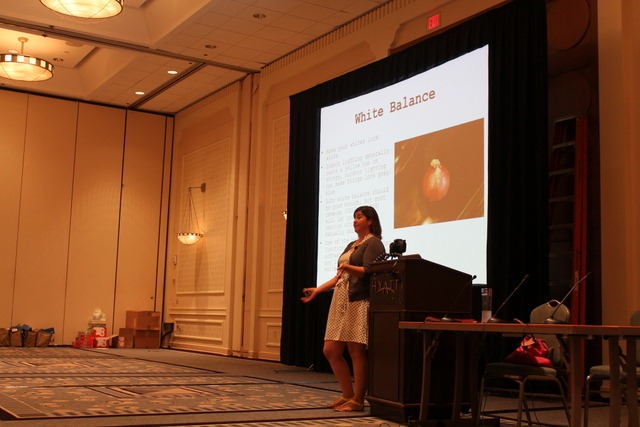 Some of you might remember that last year I gave a presentation on Blog Photography 101, and this year I’m teaming up with my gals Lauren from Me and the Mountains and Cassie from Back to Her Roots for a panel on how blogging has helped lead to our dream jobs (without having to blog full time AS our jobs).

I’m super excited, not only for the panel, but getting to reunite with Lauren, who moved from this area a few months ago, and to finally MEET Cassie, who I feel like I’ve already known forever. Cassie designed an absolutely epic presentation and I know it’ll be amazing.

(I mean, seriously, it is the most beautiful set of slides I’ve ever seen in my life. Do you SEE why I asked her to design my book cover now? :D)

Here’s the official blurb for our panel in case you’re interested in exactly what we’ll be speaking about:

From Blog to Job: Utilizing Your Personal Blog to Elevate Your Career

Unfortunately, it is a small (itty bitty, teeny weeny) percentage of us that will be able to turn our blogs into a full-time career on their own. But that doesn’t mean that blogging can’t help lead to great things for our careers! Join Cassie from Back to her Roots and Lauren from Me and the Mountains for a panel led by Gretchen of Honey, I Shrunk the Gretchen, on the ways that blogging has helped these different women find their dream jobs.

In addition to leading the panel, I’ll also be front and center at the HLB Book Club meeting which is on… my book, TERRA! Yay! Hopefully this will be the final push I need to finish out Book 2! Hehe.

If you’re at HLS this year, PLEASE make sure to say hi! I like to think I’m fairly easy to spot now that my hair is purple. Purple and pink. Kekeke.