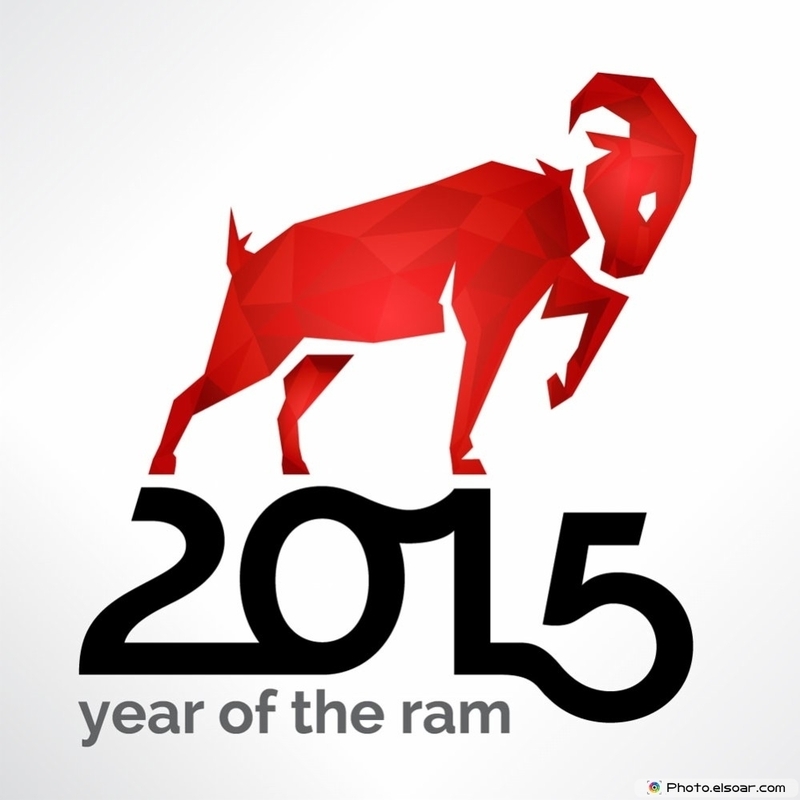 Yesterday marked the first day of the Year of the Ram (or Sheep or Goat, depending on who you ask!), so allow me to wish you all a year of prosperity, good health, and great times! As most of you know, I am half-Chinese, so Chinese New Year is usually a big deal in my household, but this year my parents are out of the country so I had to make due with my own mini-celebration.

And by mini-celebration, I mean that ate some hand-pulled noodles at Lotus Garden with friends. Heeeeee.

Speaking of celebrations, I have another exciting thing to celebrate this week: 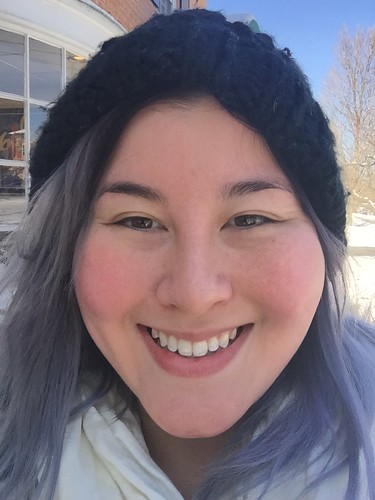 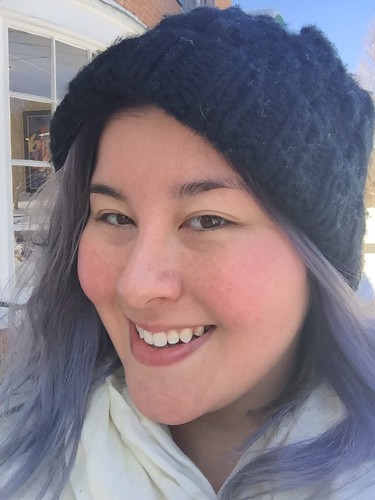 I’ve had lingual braces for the past year-and-change, which means I had braces behind my top set of teeth. So while you couldn’t actually see them, I DEFINITELY knew they were there. And now they’re gone! Well, replaced with a permanent retainer, so there is still a little something behind my chompers, but nothing nearly as intrusive as those big metal brackets. So here’s to a new year of not getting food stuck in my braces anymore!

In other news, Yelp’s Fit Club is still chugging along, and this week has so far given me the chance to try out an Ayengar yoga class. And tomorrow I toy with fate by attending my very first [solidcore] class, which I hear is supposed to be the most difficult workout of your life. No big deal. And then, as if that weren’t enough, I have another fitness event on Sunday — a bootcamp-style workout at The Worx by Maia. WHEW.

Good thing I’ve been doing P90 for the past six weeks, otherwise I wouldn’t even be in good enough shape to make it through my own fitness classes, hahahaha.

So I guess you can look forward to hearing about all those various different workouts next week… if I survive, that is! And have a great weekend in the meantime, folks!

Gung hay fat choi, friends! Or, for those of you who don’t speak Cantonese, Happy Chinese New Year! And gong xi fa cai to my Mandarin-speaking friends, too! Yesterday was the official first day of the Year of the Snake, so it is with a somewhat heavy heart I say farewell to the Year of the Dragon (*my* Chinese zodiac) for the next 12 years. See you when I’m 36, bud. 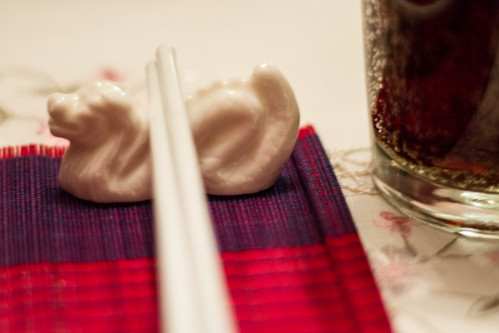 My weekend was jam-packed with awesome activities, which is great since I was totally out of commission for almost ALL of last week thanks to that nasty flu I caught. Luckily, it cleared up (well, mostly… my voice is still quite hoarse so I sound like sexy Phoebe) just in time for my stellar weekend. I took about 20,000 pictures over the weekend, almost 90% of which was of delicious food, so you (or, rather, your stomachs) will just have to bear with me. (But c’mon, you’re used to the photo-explosions by now, right guys?) 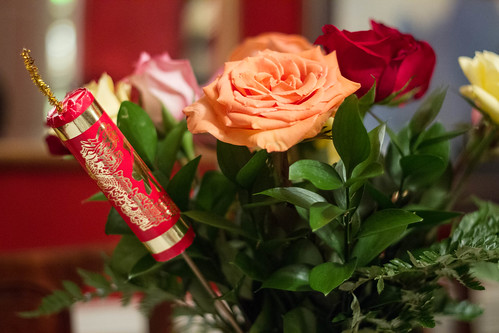 So, Saturday I actually spent a large part of my day participating in a sneak peek of Frederick, Maryland‘s restaurant week, which was SO much fun (I got to spend the day with one of my favorite people ever, the fabulous Lauren from Oatmeal After Spinning, as well as make some new friends, so OF COURSE it was epic!) but that recap will be coming tomorrow. We’ve got CNY to cover, after all! Prepare yourselves to be deeply submersed into the 50% of me that comes straight from my mama. 😉 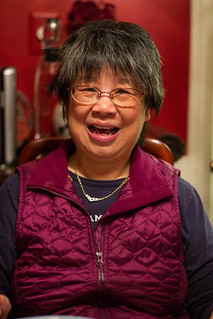 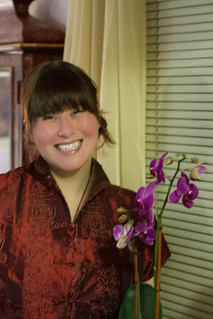 Is the resemblance any more prominent when I’m wearing a chi-pow top? No?

On the VERY extensive menu was: 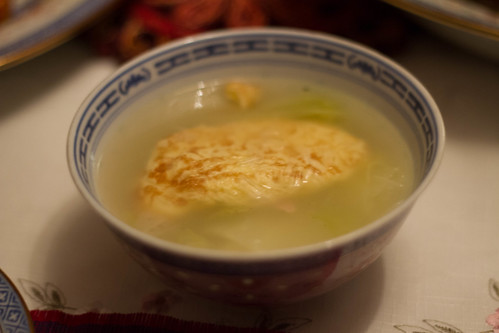 Soup made with chicken, ham, cabbage, vermicelli noodles, and an egg dumpling (the egg is supposed to symbolize a gold bar, so the soup is meant to encourage prosperity in the new year!)… 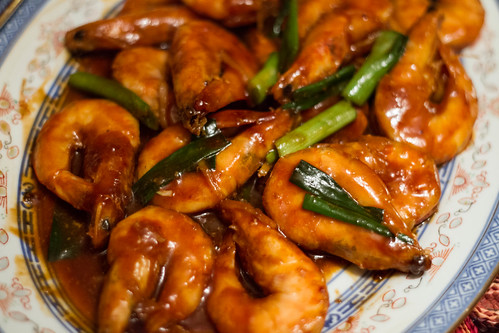 Prawns in a sweet and sour-type sauce… 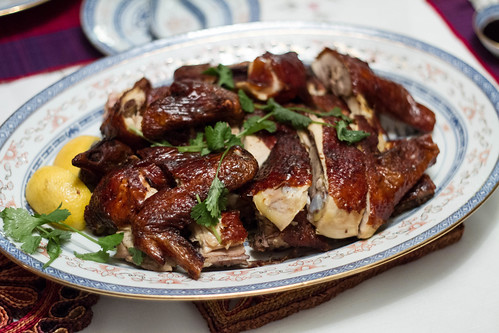 Crispy-skin chicken (can you spot the beak?)… 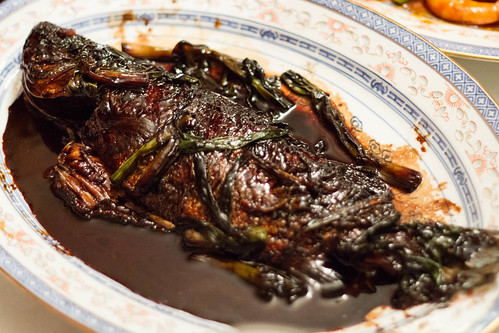 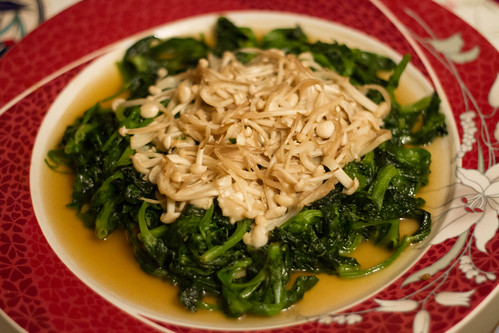 And a vegetable dish with mushrooms on top. And rice, duh. My mom is an EXCELLENT cook, so it was all delicious. Unfortunately, I didn’t get to stuff my piehole as much as I would have wanted to, due to the aforementioned tasting. But that’s okay, since even though these dishes were great, all my FAVORITE dishes were to come the following night anyway. 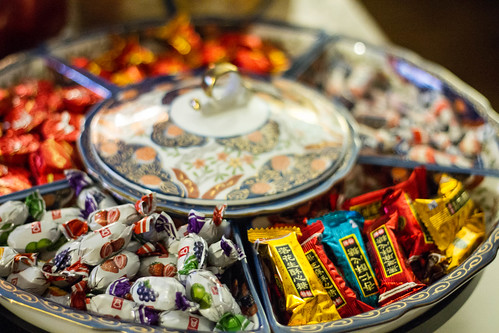 So Sunday evening we headed back over to see the ‘rents and participate in CNY: The Sequel. Sean was a wonderful sport this week, participating not only in both days of CNY festivities, but in my mom’s birthday dinner earlier in the week as well. He won lots of boyfriend points, that’s for sure. But, to be fair, it’s not like he came away empty-handed either. He got to experience, for the very first time, the wonderful tradition of lai see/hong bao (red packets). 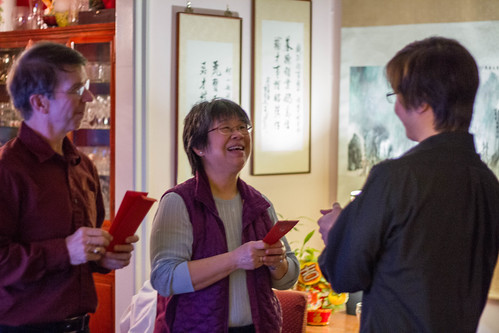 For those of you aren’t familiar, it’s a tradition where youngsters “gung hay” their elders: They wish their elders a happy new year, with specific well-wishes for things like prosperity, success, good health, etc. In return, the elders then bestow similar well-wishes on the youngsters, as well as red packets that are filled with–what else?–MONEY! It’s clearly a tradition I am VERY happy that to continue with year after year. 😉 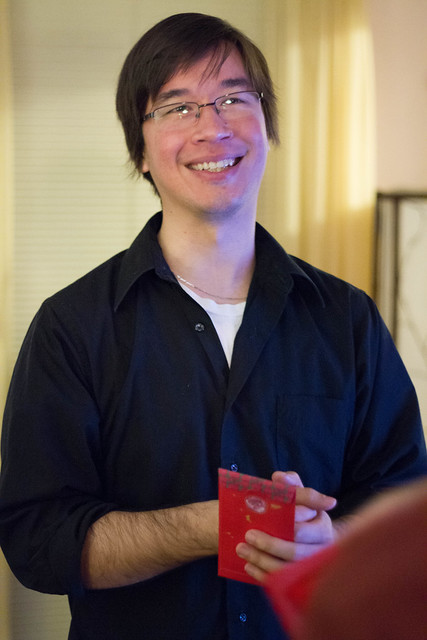 My brother wishing my parents good things for the upcoming year in garbled Cantonese (which is still 100x better than my own).

After the lai see packets were exchanged, I helped my mom with dinner and we all sat down for yet another feast. Which was basically ALL THE CARBS and was totally, totally delicious. 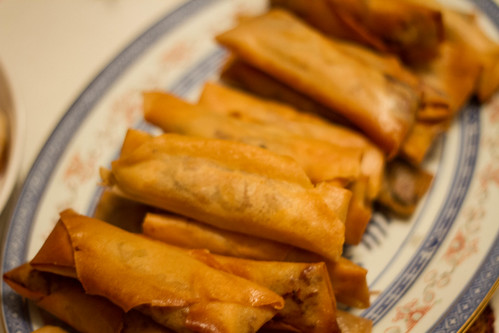 We started off with homemade Shanghai-style spring rolls that I rolled up. Needless to day, they were awesome. 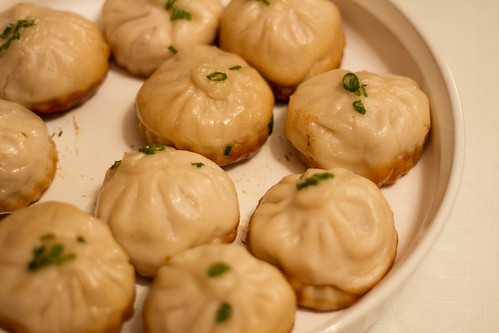 There were steamed pork bun dumplings, the kind with soup inside which are insanely good (and messy). 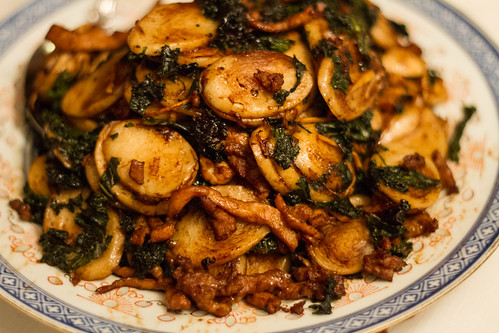 There was also not one, but TWO different rice cake dishes (although I only photographed one). This is my favorite Chinese dish OF ALL TIME, and it’s traditionally made with rice cake noodles, pork, and chinese cabbage–but my mom made one version with kale instead. Both were delicious! 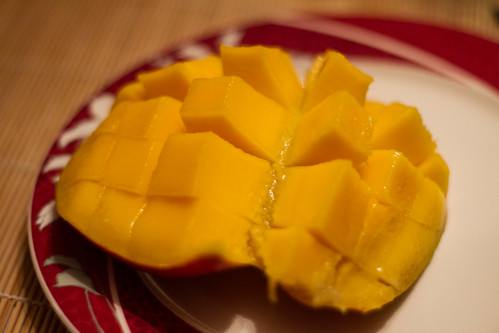 And we finished with some ripe mango… and far too many White Rabbit candies. Well, the last part was really just me. I just can’t help myself, I only get to have them once a year!

Okay, whew. I think that’s good enough for today (that’ll do, pig, that’ll do). I hope you all had a great weekend, and I can’t wait to share the rest of mine with you tomorrow! Haha, I’m SO excited to actually have fun things to blog about this week! Peace and release. <3