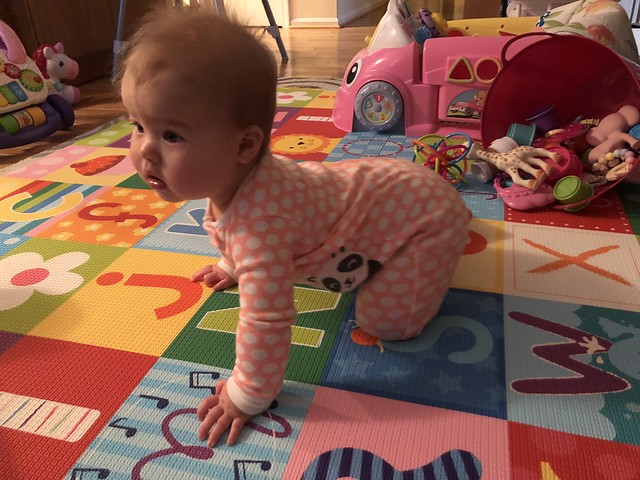 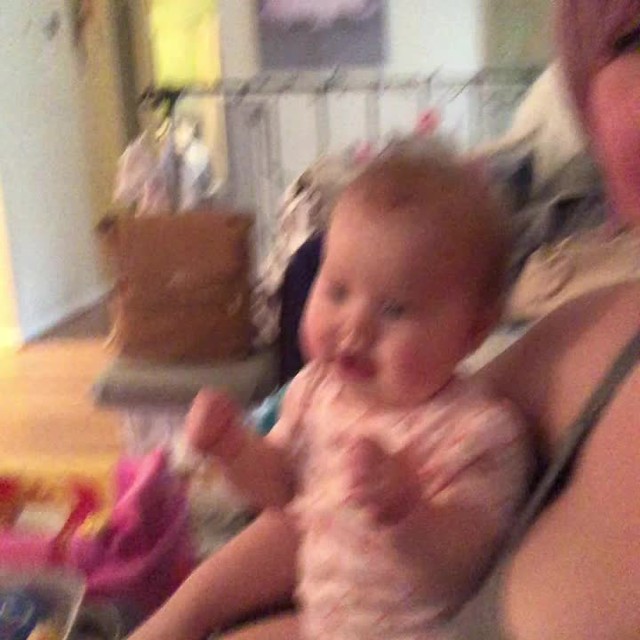 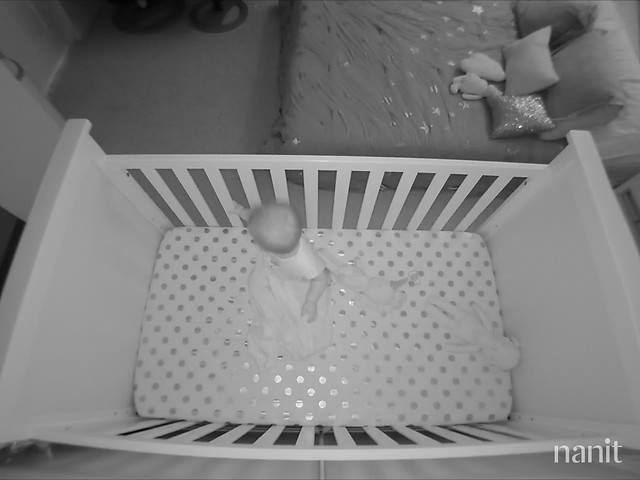 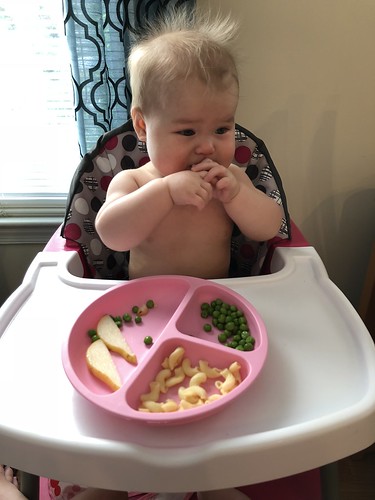 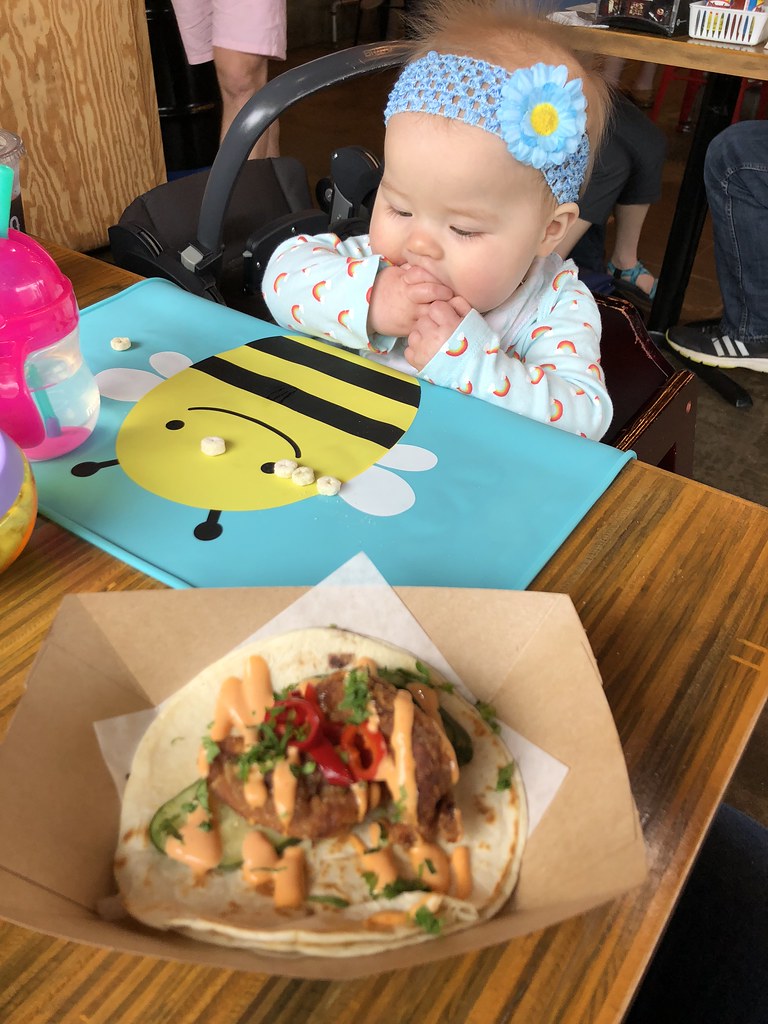 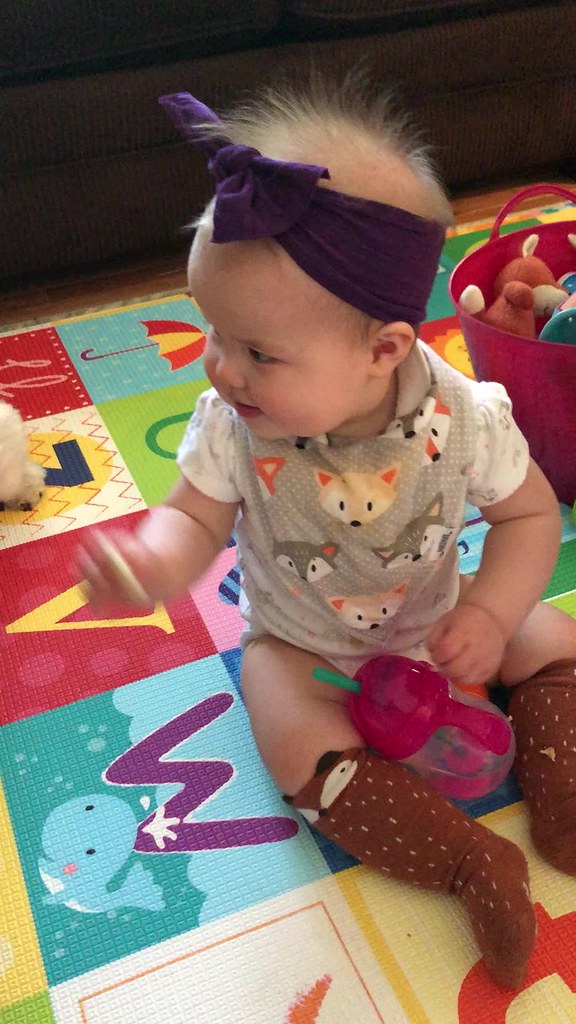 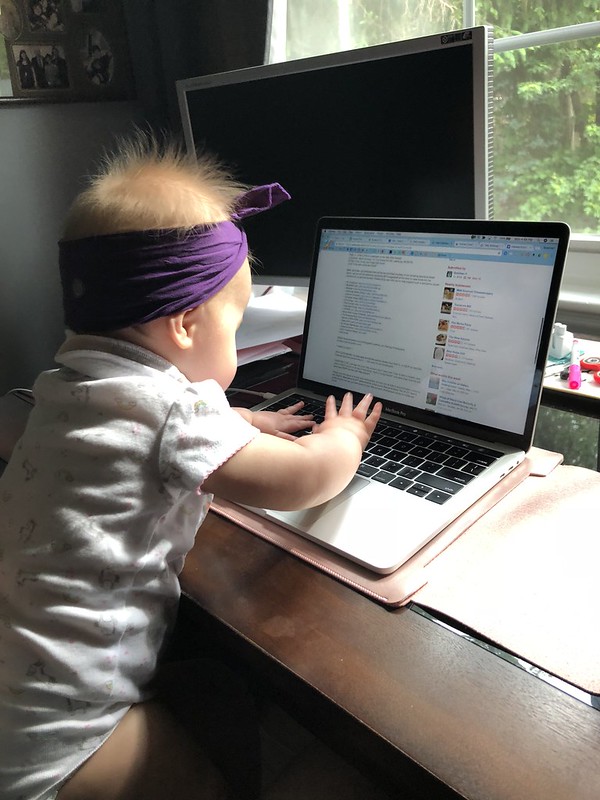 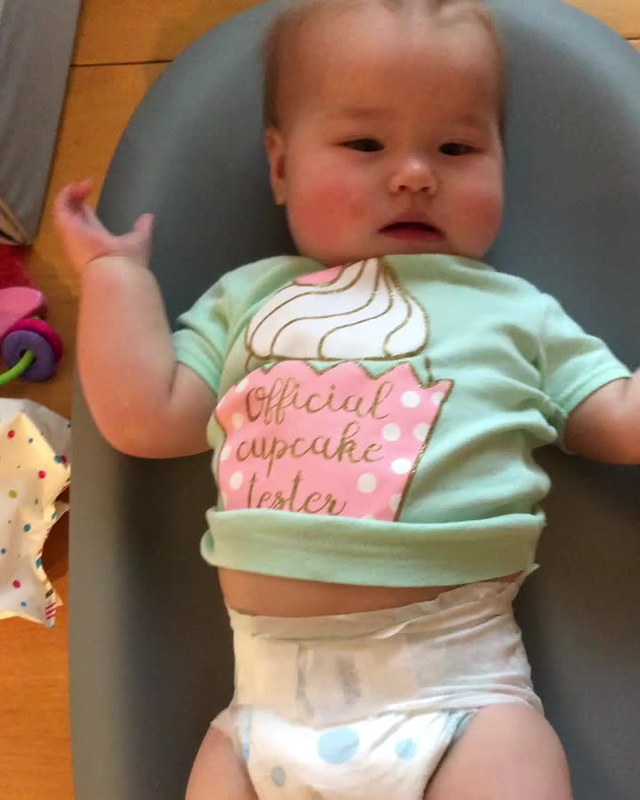 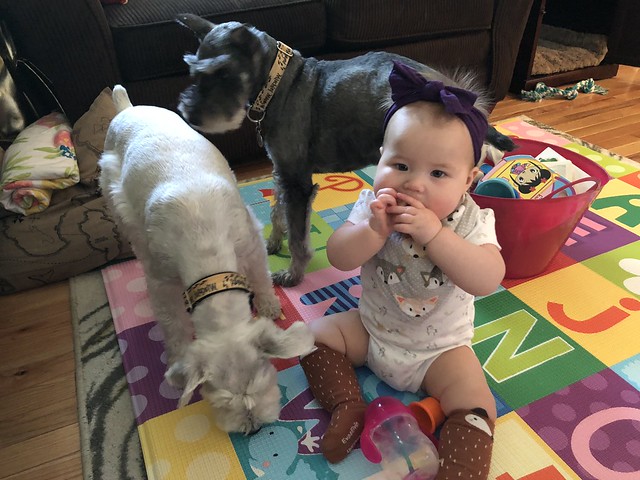 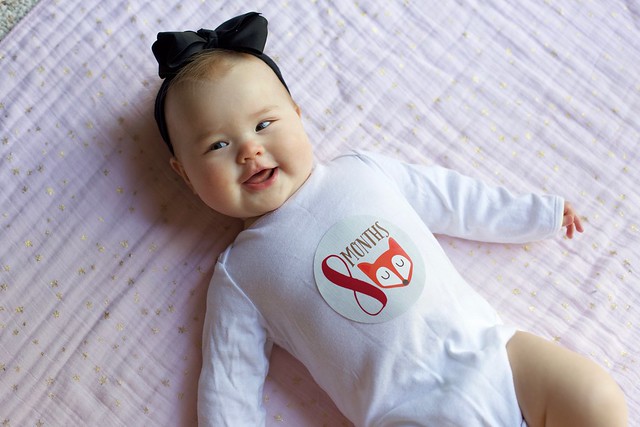 Our little Lucky Penny is eight months old today! And I gotta say, she is certainly not seeming quite so little anymore! She weighs in at 19 lbs, 3 oz, and is 27 3/4 inches long (78th percentile for both!). Eyes are still blue and hair is still red! 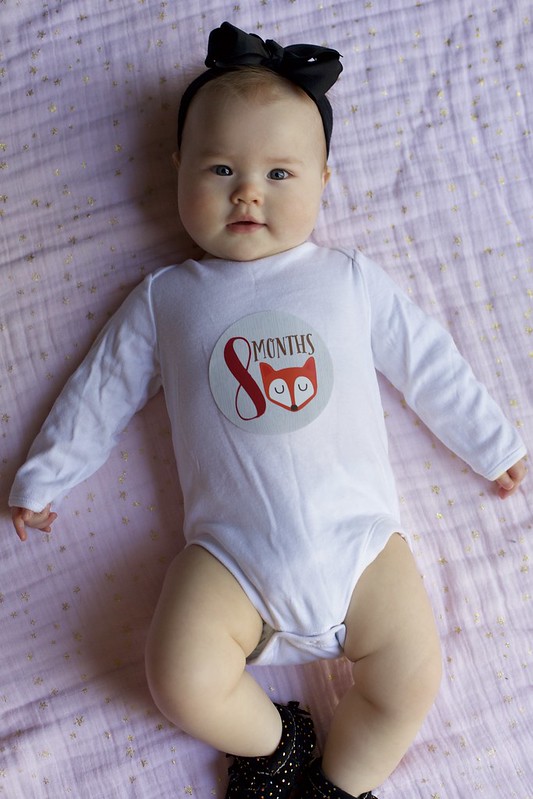 Penelope continues to bring such joy and light to our lives! She’s a little lovebug, giving us pats on the back and lots of super gross and amazing open-mouth “kisses” all the time. She loves music (especially “The Happy Song” by Imogen Heap!), her new Crawl-Around-Car toy, and looking at herself in the mirror (she really must be my child.) Naps are still pretty unpredictable (girl loves her 40 minute power naps), but she sleeps aaaaall night long (usually 7 – 7) in her crib, so we’re certainly not complaining!

She’s total chatterbox, has her “Ma,” “Da,” “Ba,” “Na,” and “La” sounds down pat, and has recently discovered how fun it is to GASP super loudly without warning (making it seem like she can’t breathe and not freaking me out at all NO SIRREE). She does say “Mama” and “Dada” all the time now! Which is, of course, made slightly less special when you consider that she says “Mamamamama” to everything from Daxter to her sippy cup… but you know what, once in a while she’s GOTTA BE referring to me, so I’ll take it. 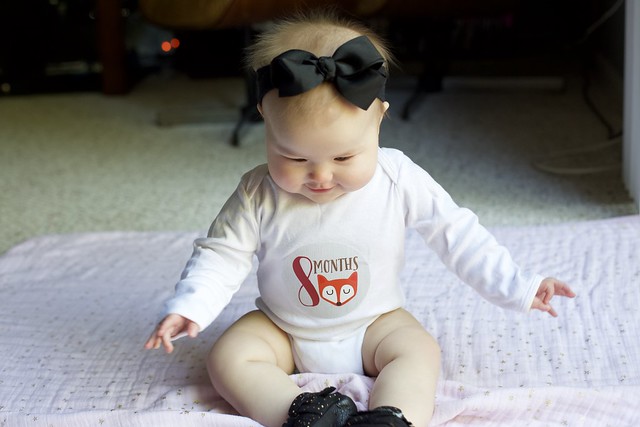 Despite the issues I’ve been having with my milk supply lately, Penny is still a very good little eater. She’s getting better and better at feeding herself little bits and pieces, and her favorite foods right now include scrambled eggs, peas, rice, and bread. (What can I say, girl loves her carbs.) And she can drink out of both a sippy cup and a straw cup now!

She also continues teething like a little fiend, but despite the drool, rosy cheeks, and chewing on ERRRRVERYTHING, she still has no teeth to show for it! I think I can feel one of her bottom teeth juuuust below the surface though, so it could make its appearance pretty much any day. 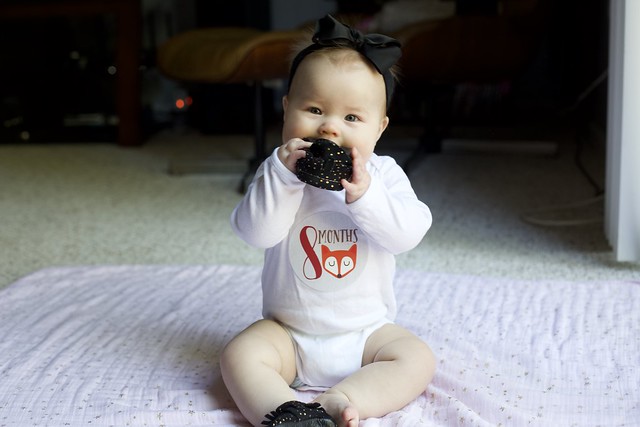 And speaking of any day now, this little mover and shaker definitely seems like she’ll be crawling at any moment as well! She spends most of her time flipping onto her tummy these days (such a difference from those days of whining through tummy time!), getting up on her knees, rocking back and forth, and scootching herself backwards (until she gets half-stuck under the couch or coffee table, that is!)

She’s always wants to be on the go — reaching for toys and silverware, wanting to see all around her, rolling and flipping and twisting. Having her be so interested in moving and grooving is amazing, but admittedly it’s already putting a crimp in our previously non-mobile style, haha. You just have to be so much more on the ball in terms of where you put her down — she 100% cannot be left on the bed or couch anymore — and I’m always on the lookout for things she can bonk into. Also, trying to change her diaper these days…

…well, it’s a challenge. And I know this is just the veeeeeery beginning, too. She’ll only get more mobile — and faster! — from here. In fact, I’m researching top-of-stair baby gates and babyproofing as we speak, haha.

Of course, I wouldn’t have it any other way. It makes me so, so happy seeing her learn and grow and develop. It’s already hard to imagine that she’s the same scrawny little lump of a babe that popped out 8 months ago! 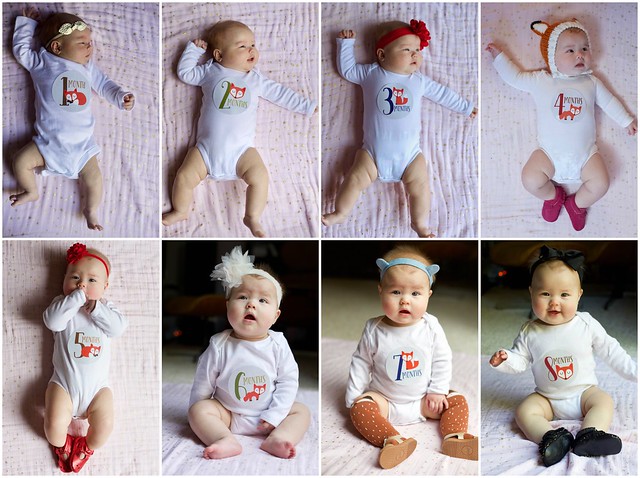 We love you to the moon and back (and then back again), Penelope!