Good morning lovelies! I hope you are all enjoying Day 1 of the 24th Year of Gretchen (as it shall henceforth be known) as much as I am! Thank you all so, so much for your wonderful birthday wishes yesterday — my day DEFINITELY got better after the car-battery debacle from the morning. 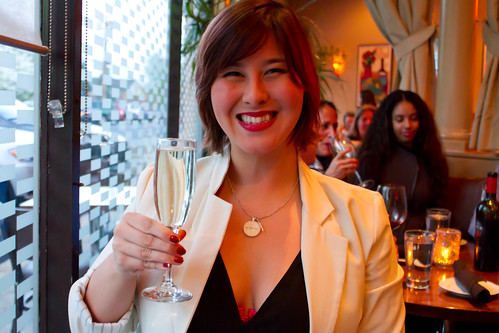 Cheers to you for brightening my day!

In addition to the lovey-doveyness I felt all day, my office also surprised me with a birthday celebration in the kitchen (I blushed SO red when I walked in, haha!) that included not one, not two, but three different kinds of cakes. I still have an entire cake’s worth leftover that I took home! And if all that wasn’t enough, I got taken out to a birthday dinner by this studly guy: 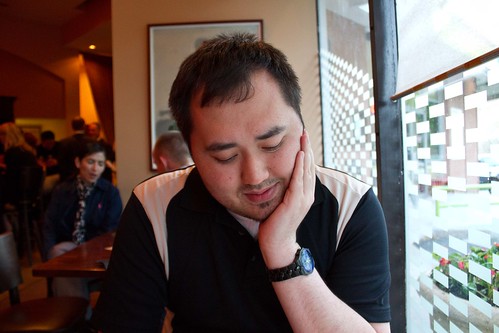 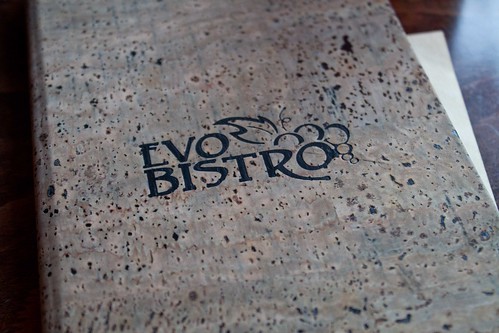 Sean took me to Evo Bistro, an upscale Mediterranean tapas-style restaurant in McLean that neither of us had ever been to before. I liked the general feel and decor of the place, but overall I have to admit I wasn’t too impressed. I’m generally not a hard person to please when it comes to restaurants (or movies, or books, or generally anything at all, haha), but I am trying to get a little better at providing honest reviews to you guys, so here’s the facts: It wasn’t terrible, but the service wasn’t strong and it simply couldn’t hold a candle to our Graffiato experience from Saturday. The restaurant was certainly hopping for 7:30 on a Wednesday night though — the bar area was packed! It’s in an area that’s surrounded by a few office buildings, so I have to assume it’s quite the popular happy hour spot. 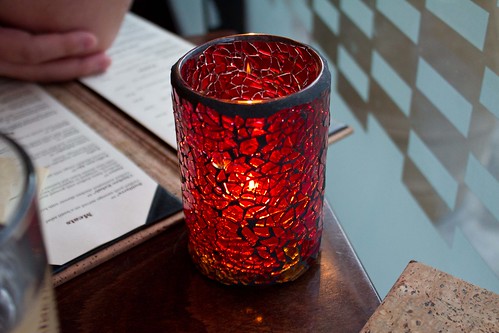 We were seated at a small table next to the window, given some water and menus to peruse. There was unfortunately a bit of a wait after that, as there was evidently some VIP (the restaurant’s owner, perhaps?) in attendance that night, so they were readying his special table behind us at during that time and I think we got a tiny bit neglected as a result. Eventually, our waiter came over and took my drink order (a glass of prosecco, of course. What else?) and in the interim the VIP/owner guy arrived so the entire staff of the restaurant made a point to come say hello to him. 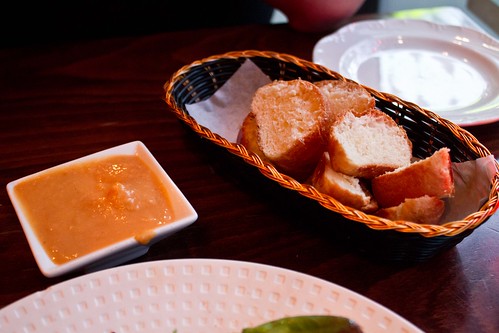 Warm bread with “hummus” dip that was pretty heavy on the cumin. Sean thought it tasted like taco seasoning!

When our waiter finally came back with my drink and our bread basket to take our food order, I’ll admit I was a little surprised that there was no “Welcome to Evo, have you been here before?” type schpiel. It just seemed like this was the kind of place that would have that sort of thing down? Especially because part of their menu is small plates, which usually requires a little bit of explanation (especially because, as we found out, their definition of “tapas” was a little bigger than I’m used to. We ended up with a lot of food for two people! Through my mastery of the art of eavesdropping, however, I found out that our waiter had only been working there for 8-days, so I cut him some slack for lack of presentation at that point. (That sounds snobby, haha. I don’t mean it to be though, I’m just being honest!)

Since our understanding was that the majority of the dishes were tapas-style, we ordered a little selection to share. 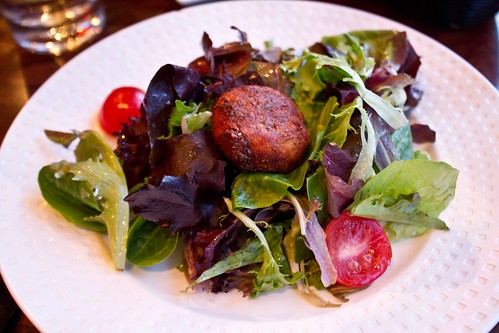 I started with the Ensalata, which was greens and a couple of cheery tomato halves tossed in a white balsamic vinaigrette dressing. It had a small medallion of pistachio-encrusted goat cheese on top as well. It was quite good, and I enjoyed the cheese a lot (uh, duh), but I didn’t think the price point ($9) was fair given that there wasn’t really anything of cost on that plate other than the cheese. 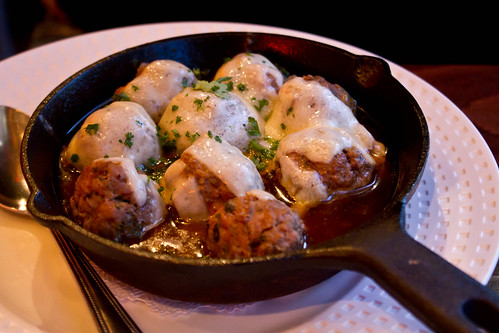 The first dish they brought to the table was the Kufta, or lamb meatballs. I enjoyed the flavor of these, but they were a little overcooked so the texture was quite dry and crumbly. I couldn’t help but compare them to the Keftedes from Zaytinya and, well, they lost, haha. 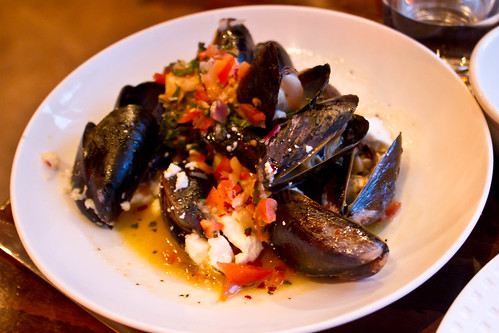 Along with the meatballs, they also brought out the Les Moules dish, which was mussels with a tomato/garlic sauce and feta cheese. This was my favorite dish that we ordered! I always love mussels, but this had a really nice soft heat from the chili flakes, and I really enjoyed it. This dish I definitely recommend. 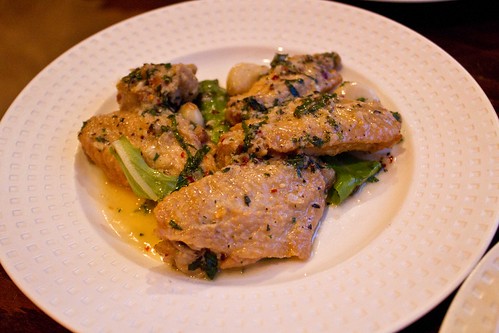 While we were still working on those, they brought out the next set of tastings, which included the Pollo con Ajo. This dish is described as “seared chicken wings with garlic and herbs”, but the cooking technique reminded me of a Chinese dish my mom makes called “Drunken Chicken”. I really didn’t know where the seared part came into play. They were also INCREDIBLY garlicky, almost overpoweringly so (and you guys know I love my garlic, but not that much!). I was also a little turned off to see that they served us part of a broken drumstick on the plate. The handle (?) of the drumstick had clearly broken off, but they served us the head part anyway. Just didn’t look very nice. 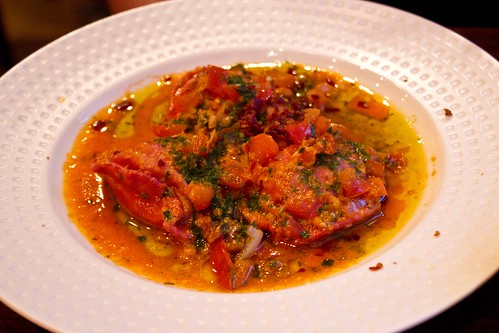 The final part of our meal was the Lobster Ravioli. Anytime I see lobster anything on a menu, I tend to get pretty excited, and it was no different with this dish. Unfortunately, this was my least favorite item on the table! The description from the menu says “Housemade lobster ravioli with crab meat sauce,
and crispy Serrano ham” but you couldn’t taste the lobster OR crab OR ham at all. All those delicate flavors were completely overpowered by whatever herb they used in the sauce, and I really didn’t respond well to the flavor combination. I don’t think I even ate an entire ravioli’s worth, which is saying something. 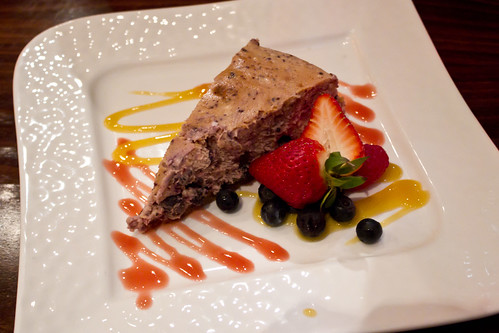 So overall the dinner food itself wasn’t too impressive (though it bears repeating that the mussels were excellent!), but I will give credit where credit is due: The blueberry cheesecake that we got for dessert was really delicious! It was very clearly homemade, so it was creamy but not heavy, had whole blueberries baked right in, and was a really good note to end the meal on. So if you ever do decide to go to Evo Bistro, I would recommend just going for dessert! We should have taken a tip from the owner and his party, since that’s what they did. They came in, got wine, and a smattering of desserts. Smart man!

So there you have it! Ultimately, I always enjoy trying out new restaurants regardless of how it all turns out. Our overall feeling about our experience Evo was that the hecticness of the staff and whatnot (probably brought on by the VIP’s presence?) made it kind of feel like the restaurant had newly reopened, although I couldn’t find anything on the website that said so. Ah well, not every bite of every new foodie experience is going to be epic! Still, a really great birthday overall. And (much to your chagrin, I’m sure), the celebrating isn’t even over yet! I’ve still got my Potteriffic party happening on Saturday and a lot of good feelings to ride out until then. 🙂