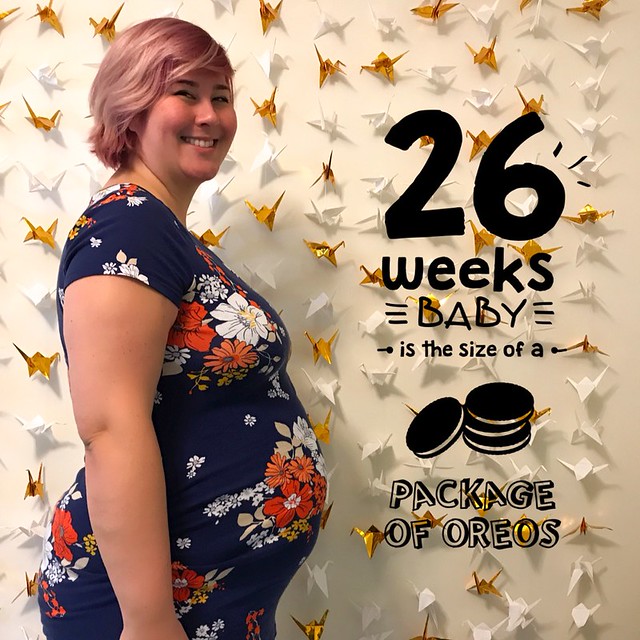 Aloha! We’re back with another update — and actual things are happening… good and bad lol! Let’s jump in, shall we?

Foxlet’s Size: Foxlet’s just under 2 pounds and about the size of a head of lettuce or package of Oreos.

Weight Gained: My scale ran out of batteries and apparently I have like 6 boxes of AA batteries but nary a single AAA battery in my house, so I’m not really sure where I’m at this week. But I think I might’ve gained another pound or so, which would bring me back up to to -5 lbs from my pre-pregnancy weight.

Symptoms: Eh, heartburn, insomnia, SPD, general uncomfortableness… there’s not a whole lot of new stuff going on with me physically. Just some more unfortunate-but-normal stuff, which seems to be pretty much par for the course with me.

Foxlet is SUPER ACTIVE (not sure where she’s getting her athleticism from, because it certainly ain’t her couch-potato mama) and loves twirling around and punching and kicking me to high Heaven. Sean was able to feel her kicking from the outside for the first time last week, which was a really special moment for us. I think the “realness” of this whole thing is finally starting to set in for him — he’s been super sweet about rubbing and talking to my belly, and has been really into discussions about baby names and baby stuff lately too. 🙂

I’m also already deep into nesting mode — my baby shower isn’t for another few weeks, but I haven’t been able to help myself from starting to set up a few things already. Which, I know, is kind of silly because I still have months to go, but I can’t help it! Nesting! The nesting is real!

Our plan is to have her sleep in the bassinet we got in our bedroom for the first however-long and then transition her into her crib in her room downstairs when she’s sleeping “through the night” (whatever that means at the time, lol.) Our bedroom isn’t very big, with two big closets taking up an entire wall, so we just kind of have to make it work by shifting some things around (including Harry & Daxter’s beds, haha.) 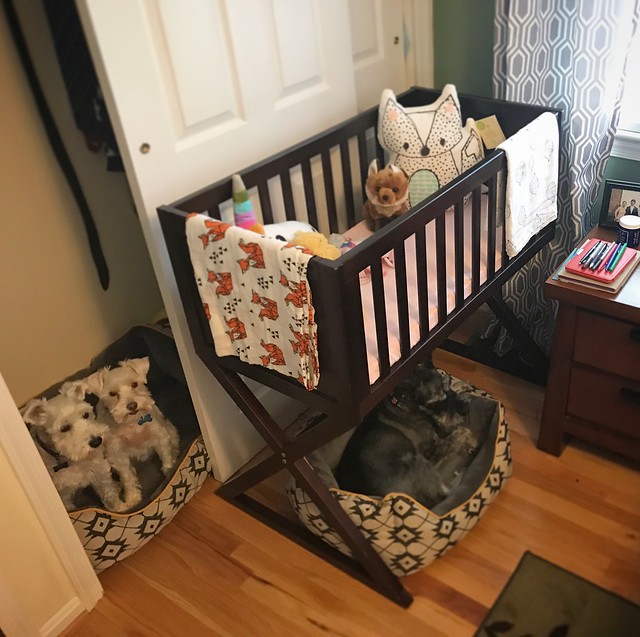 Luckily, we don’t really use that one side of the closet that much anyway — it mainly houses Sean’s and my fancier clothing — suits and cocktail dresses and whatnot.

Emotions: Sooooo, as I mentioned last week, I had my 1-hour glucose screening test… 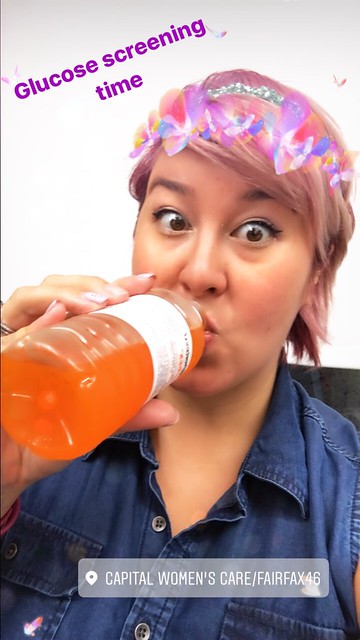 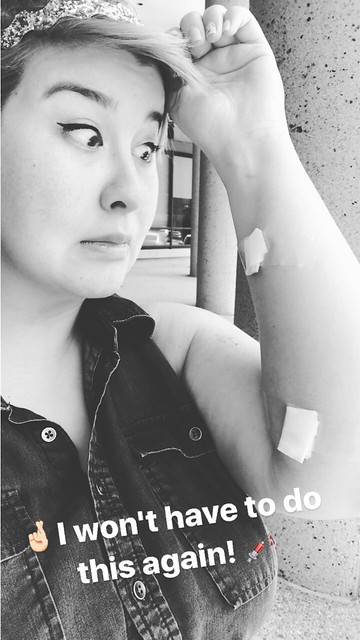 Not gonna lie, I was SUPER bummed out about failing my initial screening. Like, crying on the phone to the poor woman who had to call me with my results. And then crying to Sean about it. And then crying to my sister. This is despite already knowing that lots of women fail the 1-hour test, and many of those who do fail go on to pass the 3-hour test. (Dr. Google says anywhere from one-third to one-half of tested women fail the 1-hour screen, while only 3 – 9% of pregnant women actually have legit gestational diabetes.)

Well, even being aware of all that beforehand, I was still pretty upset when I got the call and am distinctly NOT looking forward to having to do the more invasive tolerance test. ESPECIALLY considering the lab tech who drew my blood last time left me looking like I’d been in some kind of weirdly specific forearm fight: 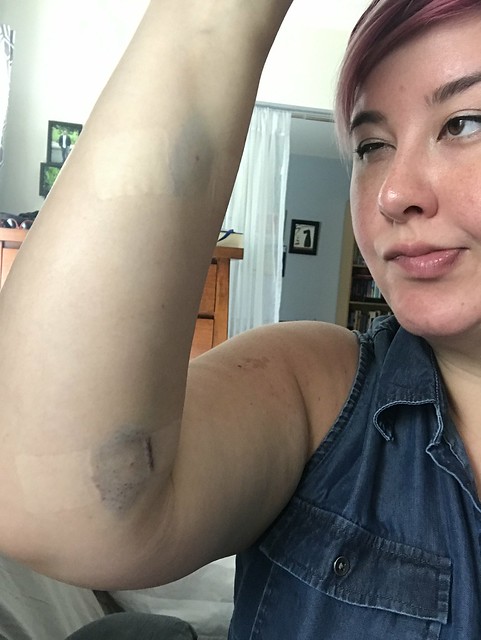 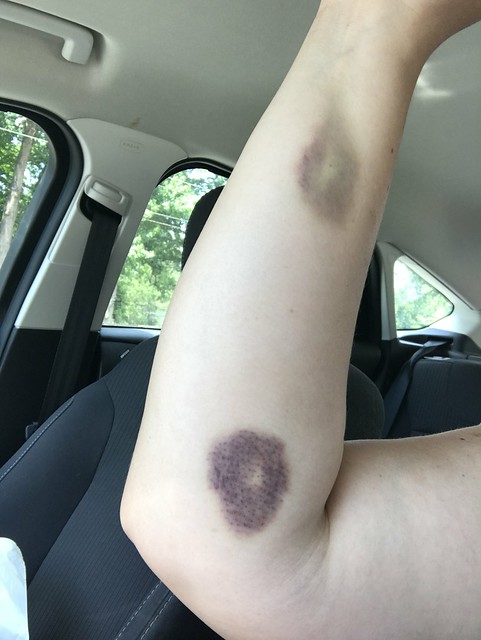 Le sigh. Anyway, my doctor’s office didn’t make it seem like it was too urgent for me to take my 3-hour glucose tolerance test, so I’m doing it at the end of this month. Basically, I get to drink another super sweet glucose drink (TBH I kind of liked the first one — it tasted kinda like super sweet non-fizzy Fanta), and then they draw my blood 4 times over the course of 3 hours (once at the beginning to establish a baseline, I believe, and then again at hours 1, 2, and 3.)

If my blood sugar is elevated outside of the normal range for 2 of the 3 blood draws, I get officially diagnosed with gestational diabetes. Which means I’ll have to go see an endocrinologist and follow a special diet and have to do those finger prick things and maybe even potentially have to give myself insulin shots! Buuuuuuuut, before I spin out of control (again), I just need to remember that those are all attached to a big “if” at this point.

So for now, I’m going to try to remain hopeful that I’m in the 20-plus percent of women that will go on to pass my 3-hour, and if I do end up having GD, I’ll cross that bridge then. After all, Foxlet’s health is obviously the most important thing here, so of course if those things need to happen, they’re gonna happen. But it doesn’t mean I’m gonna be happy about any of it, lol.

Cravings/Aversions: Been craving lots of sweet things — fruit, desserts, bubble tea. Maybe it’s my mind telling me to get in my sugars while I can, just in case I do end up having to go on a stricter diet, lol. No real aversions right now though, so continued yays there!

Sleep: Sleep is a tricky thing. When I do finally fall asleep, I think I sleep pretty hard. But the actual falling asleep part is really hard. I get uncomfortable staying in one position for too long, but sometimes it hurts to change positions while lying down because of my aforementioned SPD. Plus, my acid reflux means sometimes I need to be laying kind of upright so as not to aggravate my esophagus. I continue to be very grateful that I work from home and don’t have to adhere to a super early alarm clock.

Purchases: I went ahead and ordered a Nanit baby monitor — they’re backordered until August, so I figured I’d go ahead and bite the bullet now. Calling itself the “Tesla of baby monitors,” this monitor is supposed to provide a great quality picture, secure access via your phone, includes temperature + humidity sensors, a special night light that’s not supposed to wake the baby when you go check on her, and white noise/nature sounds functionality as well.

Plus, the “Nanit Insights” feature (an extra subscription) stores video from throughout the night and even compiles a little highlight video for you each morning so you can check on how well the baby did the night before. It has a bunch of sleep analysis features as well that are supposed to let you know how well your baby slept, and help you figure out sleep improvements and whatnot. Which, eh, I’m mildly skeptical of how accurate/scientific that part of it all is, but I’m sure it’ll still be fun and interesting for us, haha.

I was also lucky to receive a couple more baby gifts this week, so in addition to getting her bassinet set up in our own bedroom, I have wasted no time starting to get Foxlet’s room in order as well. Sean’s parents very generously gifted us with our crib and mattress, and I just couldn’t keep myself from setting it up! 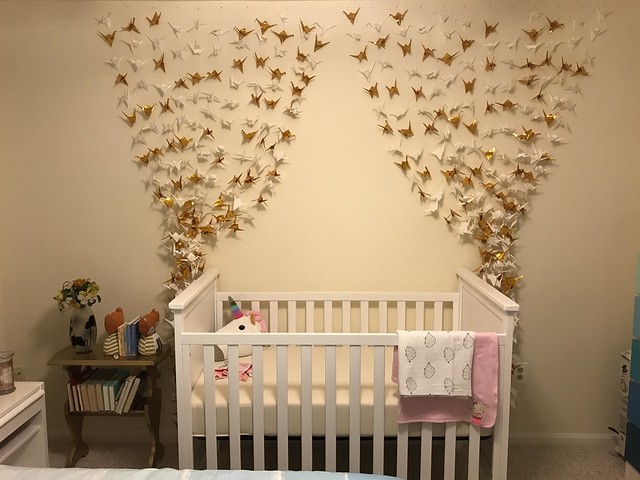 It’s taking a bit of time to figure out how everything’s going to work in her room, as our house only has two bedrooms, so her room is also our guestroom. So it was already full of furniture that I’m trying to repurpose for the baby as best I can. The main thing is trying to work around the bed, which I’m reluctant to get rid of because I think it’s sure to come in handy after she’s born — whether for actual guests or just for me, haha. 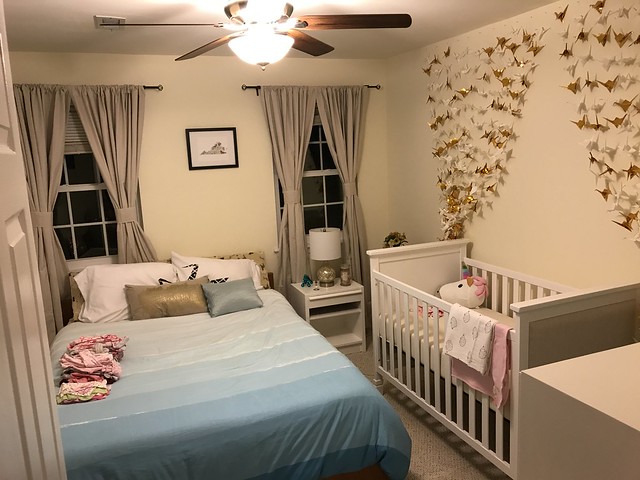 So setting up her room is involving a lot of trial-and-error, shifting things around, and just seeing where things fit (or don’t.) For example, in order to fit the crib in there at all, we have to push the bed pretty far over to one side (it used to be centered in between the two windows). It’s not ideal, but I think it kinda works? I’ll be playing with the layout of everything a lot more, so I guess we’ll see how it all ends up. 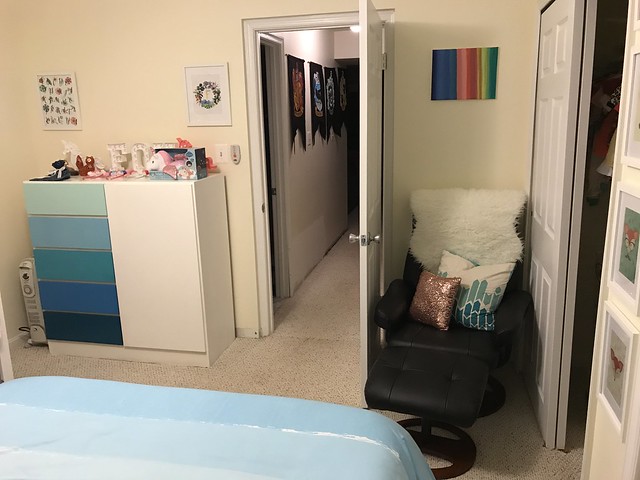 So there are still tons of changes to come, of course, along with swapping out a bunch of the current decor, adding new stuff, and performing a general girlification of the room, hehe. But consider this your very first peek at what Foxlet’s nursery will be like!

I also haven’t decided if I like the cranes pulled to the side like curtains (how it is pictured above), or if I want to cut some of the strands so they all hang straight down (the way they used to), but in a way that kinda forms an arch over/around the crib. It’s probably kind of hard to visualize, but… thoughts? If I leave it as it is now, I’ll definitely be putting a decal or some artwork or something on the wall in the middle.

In other news: I’ve put together a rough birth plan document and pre-registered at the hospital (for anyone who’s familiar with the local hospital system, I’ll be delivering at INOVA Fairfax), and am now looking into birth classes for Sean and me to take. Although, I have heard some mixed things about taking birth classes.

Some friends say they really loved theirs and thought it was really valuable, and some have said it didn’t really provide any new information and was kind of a waste of time/money. As someone who is    prone to doing tons of research and self-education anyway, I am wondering if I’ll fall into the latter category. I mean, I’ve already read through like 3 baby books, am constantly perusing the BabyCenter forums, and am listening to the Pregnancy Podcast every night before bed soooooo… lol.

I imagine birth classes are one of those things that can’t possibly hurt to do (and might be especially great to get Sean more comfortable with things), but I’d love to hear from you guys on whether you felt taking a birth class was necessary (or, if not necessary, then at least warranted.)

Anyway, that certainly catches us up (and then some!) to what’s been going on lately. See you in week 27!