In February 2012, I took a trip to Orlando, FL with the express purpose of visiting The Wizarding World of Harry Potter at Universal Studio’s Islands of Adventure. It was, without overstating it, the best trip ever.

That is, until this one.

Because this time, I not only got to go back to Hogsmeade, but I also got to visit Diagon Alley, the newest part of Universal Studios Theme Park and without a doubt the most magical place on Earth (take that, Disneyworld!). Now, most of you know that, if we’re putting it mildly, I [email protected]#%-ing love Harry Potter, so consider this your warning that things are about to get real nerdy real fast.

I feel it is important to note that Diagon Alley is not visible from the streets of Universal Studios Theme Park. Rather, when you enter what is clearly marked as “The Wizarding World of Harry Potter – Diagon Alley” on the park map, you find yourself standing in a London street. 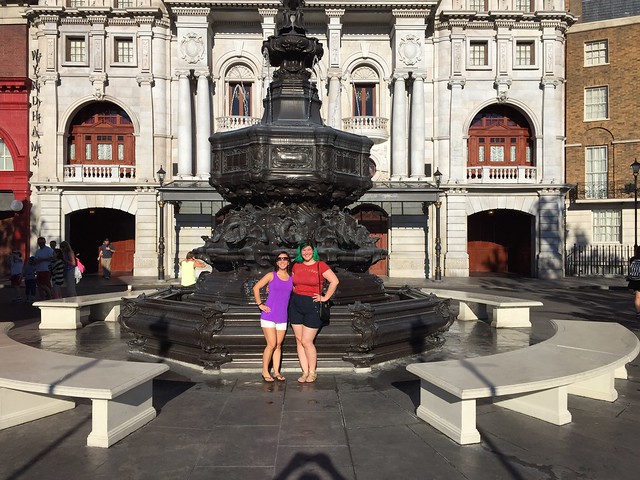 It’s all an homage to HP, of course, but it really does have that London feel. They even have a stand selling England-y things set up right outside — union jack t-shirts, “Keep Calm and Carry On” mugs, etc. Looking around, you’ll see the entrance to the Leister Square Tube stop, King’s Cross Station, and, of course, Number 12 Grimmauld Place. 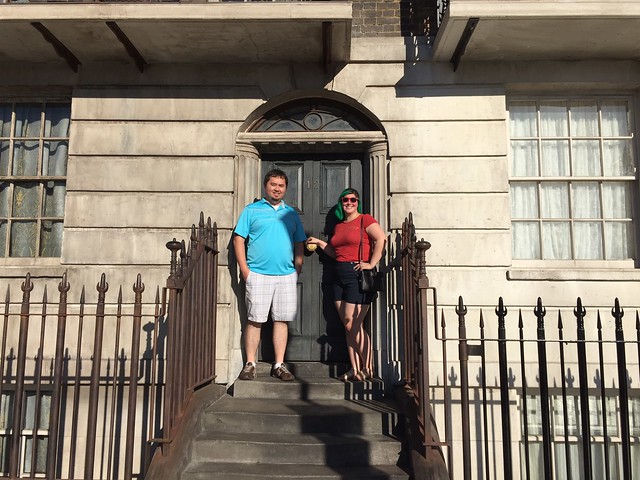 The Knight Bus is also set up right outside, complete with conductor extraordinaire Stan Shunpike and his little shrunken head sidekick who yells things at people walking by. It’s pretty great. 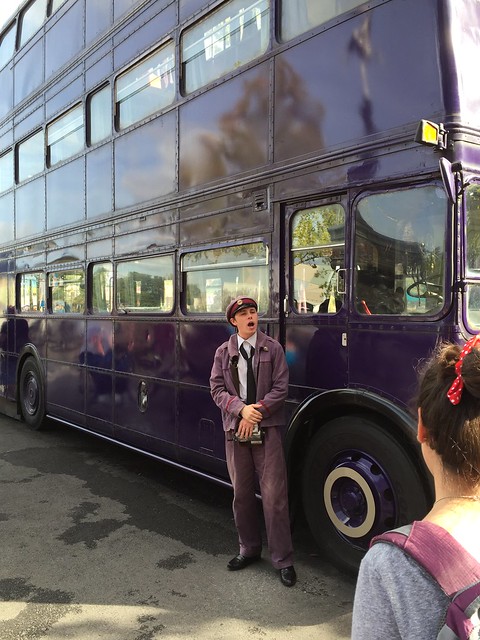 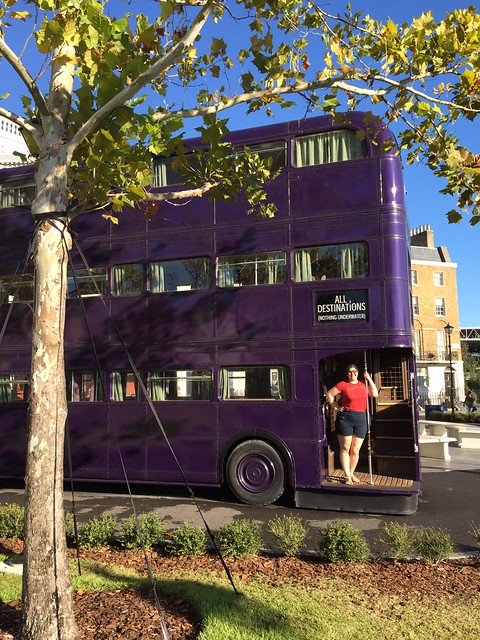 Then, you walk through an inconspicuous-looking opening, around a corner, and suddenly find yourself gazing upon that magical brick entryway…

And there it is.

First off, it absolutely feels like you’re stepping into a different world, because you’re basically BEHIND the main street of the park. You can’t really see any of the other park areas once you’re inside Diagon Alley, which is awesome in and of itself.

And it’s just perfect. You walk down the lane and it’s ALL there. On the right, Quality Quidditch Supplies, where Harry first laid eyes on the Nimbus 2000 broomstick in the window display. 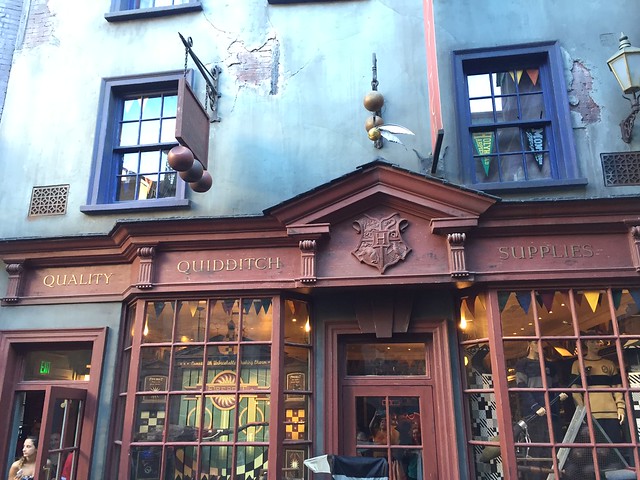 On the left is the back-entrance of The Leaky Cauldron, where you can grab a bite to eat… and where we did just that. Obviously. The food was actually really good! Expensive as all get out ($70 for lunch for 4 people, oyyyy), but still pretty impressive both quality- and variety-wise.

Walk a few steps further, and there’s Weasleys’ Wizard Wheezes, complete with a giant Fred or George raising his top hat to everyone passing through the Alley. 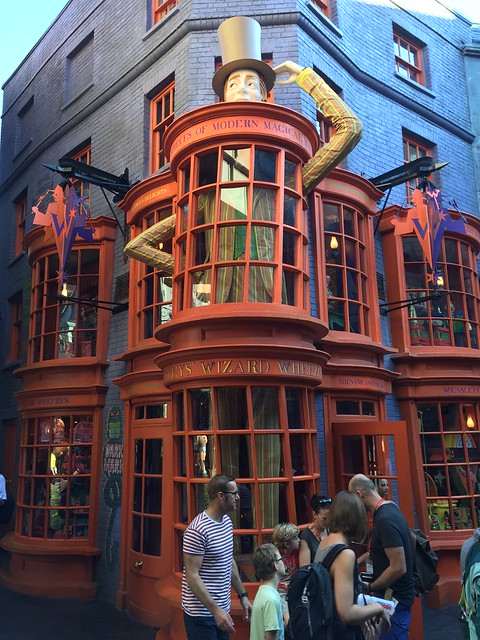 Further down the way lies Madame Malkin’s Robes for All Occasions, where Harry bought all his school robes (and where a very generous Sean bought some for me, heehee!) Hufflepuff reppin’, yo! 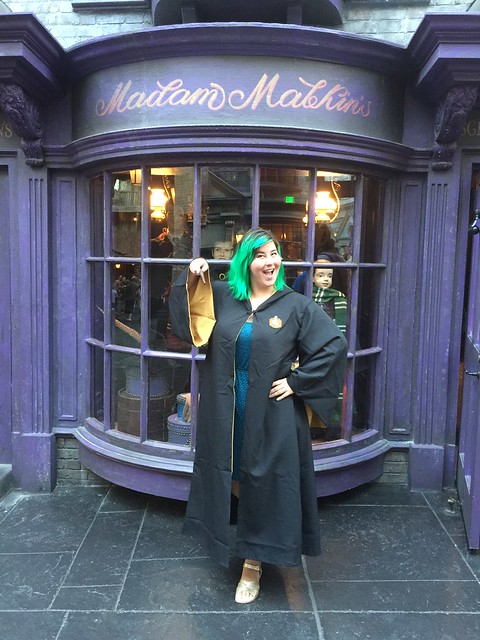 And that’s not all, by far! I haven’t even mentioned the Magical Menagerie, where Hagrid bought Harry his very first birthday present ever — Hedwig. Or Flourish & Blott’s, complete with moving poster advertising Gilderoy Lockhart’s latest book (of lies). 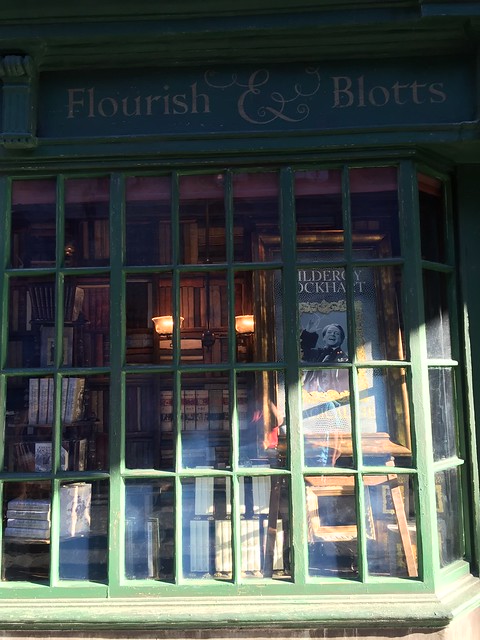 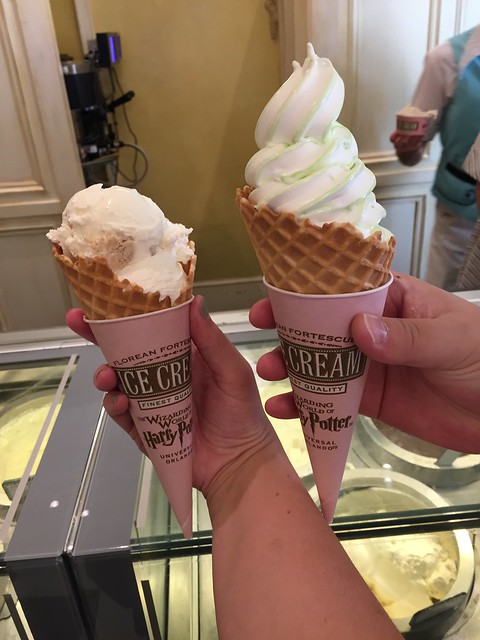 There’s Florean Fortesque’s Ice Cream Parlour, where Harry, Ron, and Hermione spent many a final day of summer enjoying ice cream after a long day of school supply shopping. They offer both hard-packed and soft-serve ice cream in flavors like Earl Grey & Lavender, Clotted Cream, Sticky Toffee Pudding, Apple Crumble, and, of course, Butterbeer. Plus normal ones like chocolate and vanilla for boring people. 😉 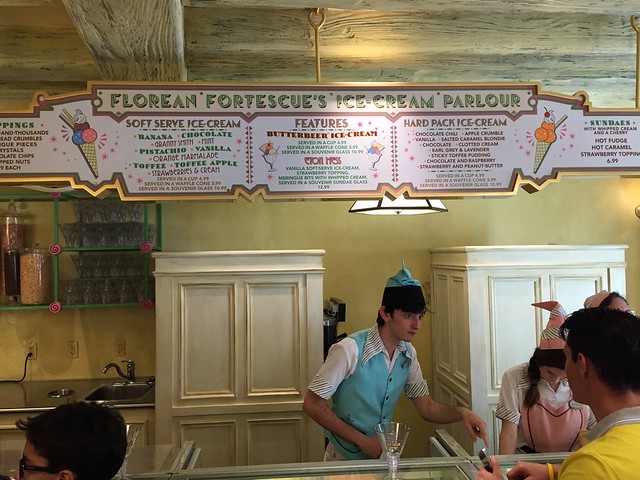 Of course, there’s another Ollivander’s here (the REAL Ollivander’s), and the park peeps clearly learned a lesson from the Hogsmeade side of the park, because instead of having to wait in the sun while 20 or so people went in group-by-group, they built several wand rooms into the Diagon Alley attraction, so there was literally no wait time at all for us. 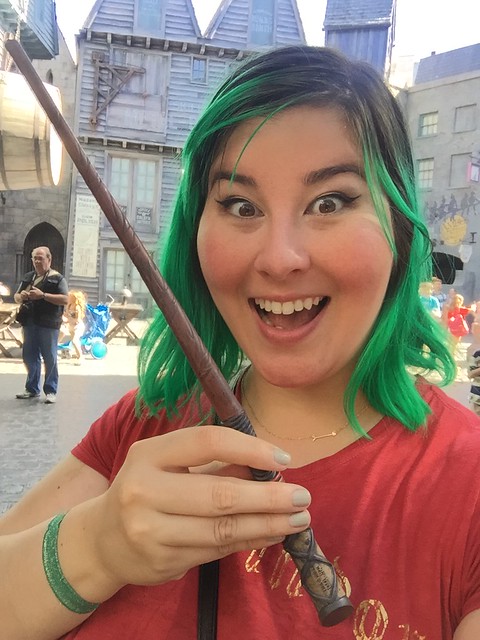 Best of all, OLLIVANDER CHOSE ME THIS TIME! I mainly credit the hair for getting her attention (it was a lady Ollivander, heh), but then again, it might have been my huge dumbfounded grin. So I got to try out several different wands to find The Wand, and then OF COURSE I had to buy it since it was, you know, the wand that chose me! Duh!

Luckily, I was planning on buying one anyway, since one new feature that they added since I last visited the park are that they now sell interactive wands, which allow you to “cast spells” at various locations throughout both Harry Potter parks. So you can walk around and cast Wingardium Leviosa on a sign, or  Aguamenti on a water fountain, or Tarantella on a window display to make a puppet dance, etc.

I tell ya, these park people really know how to get suckers like me to part with their hard-earned Galleons. 😉 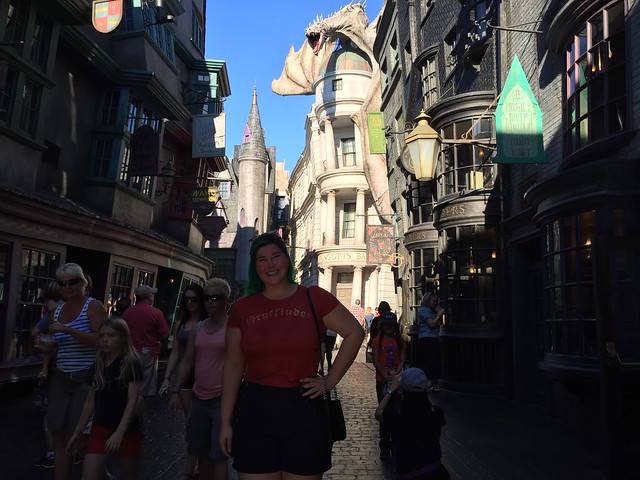 And speaking of money, right at the end of Diagon Alley is Gringotts. Yes, Gringotts Bank in all its glory, complete with fire-breathing dragon perched on top. The dragon breathes fire about once every fifteen minutes and it’s hot and it’s loud and it’s fun and you seriously never get tired of it. It’s awesome. 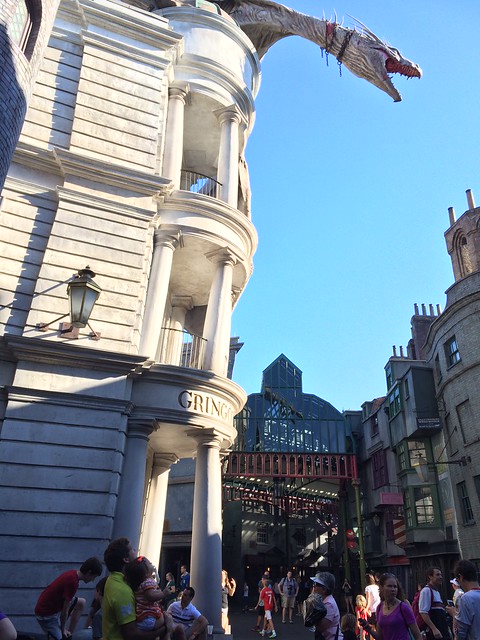 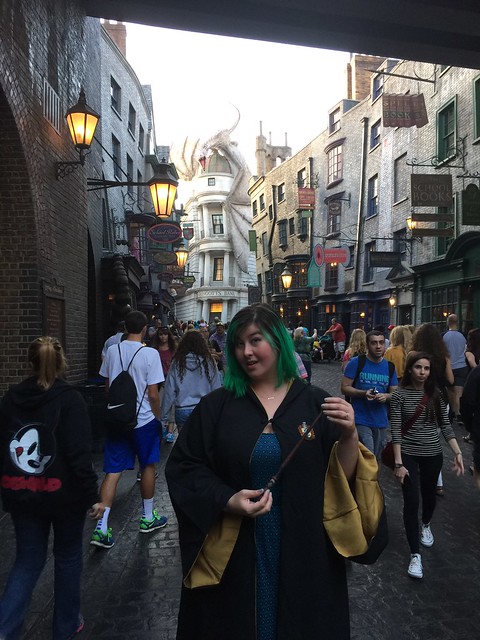 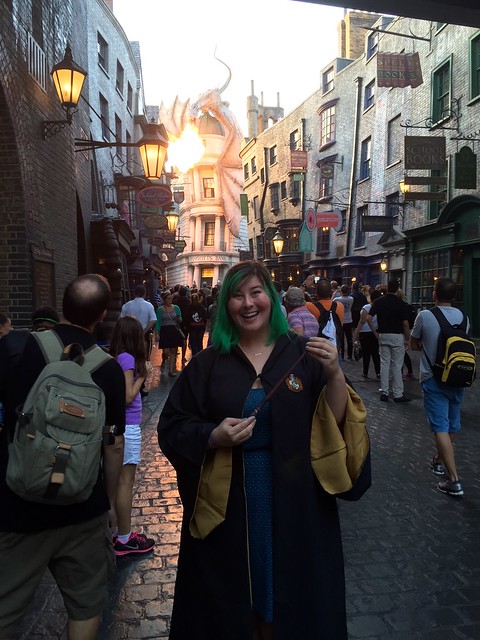 This is also where the new ride, Harry Potter & the Escape from Grigotts is located. The ride actually broke down right when we first got in line but don’t worry guys, I only hyperventilated a little. And thankfully it was back in working order with even shorter lines just an hour later! Also, the ride is really great, in case you were wondering. It’s pretty much what you’d expect if you’ve watched Harry Potter and the Deathly Hallows Pt 2 and saw what happens when they try to break into Gringotts and secretly wished it was a ride. Well, now it is!

Some people might be surprised to learn that Harry Potter & the Escape from Gringotts is the only actual “ride” in this entire part of the park (if you count the Hogwarts Express as more of a transportation attraction than actual ride.) Yep, just the one. But honestly, there’s so much to see and do you’ll barely even notice. I’m just as happy sippin’ on my Butterbeer and watching Celestina Warbeck & the Banshees perform, or one of the park’s puppet reenactments of the Tales of Beedle the Bard, as going on thrill rides. Just sayin’. 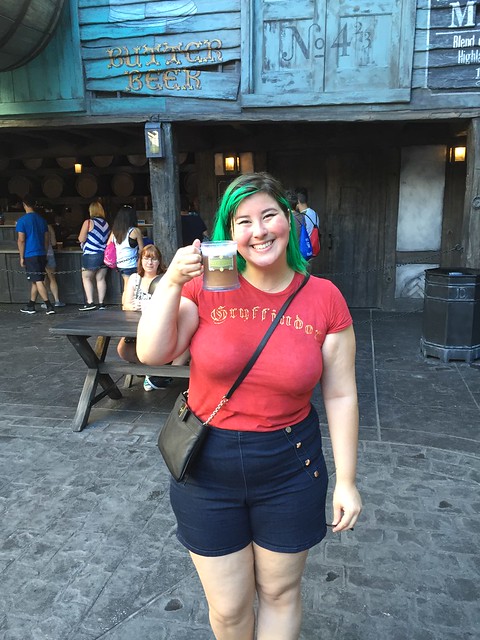 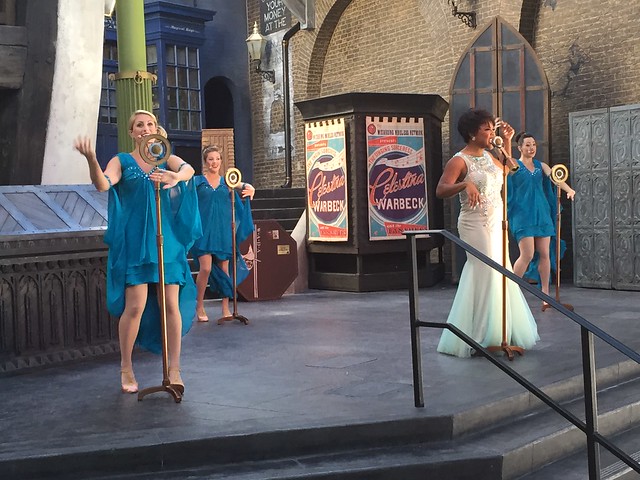 It really is just astounding how MUCH there is. They even have Knockturn Alley ready and waiting for all you dark wizards and/or people who can’t correctly pronounce “Diagon Alley” when traveling by floo powder. I swear, they must pump in cold, clammy air as you make your way down to Borgin & Burkes, because it event felt creepy. 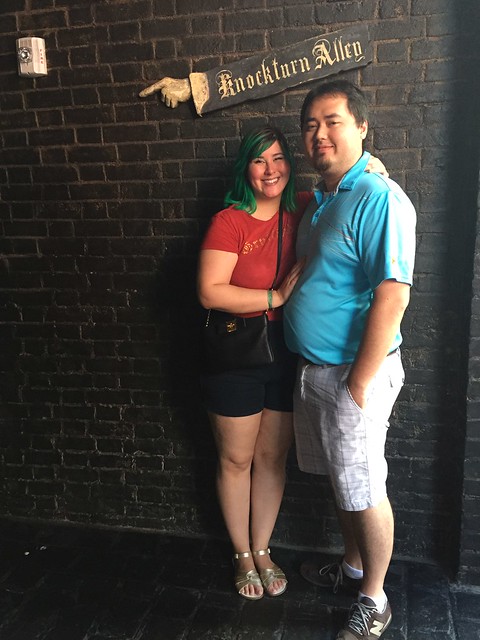 And of course, who can forget about the Hogwarts Express? You need a Park-to-Park ticket to ride it, since Diagon Alley is located in Universal Studios park and Hogsmeade is located in Islands of Adventure, but it’s so, so worth it. The Hogwarts Express functions as both an actual train ride from one park to the other, and as a little interactive movie-type thing, where you get to see various things out of the window and happening in the hallway as you travel to and from London/Hogsmeade. 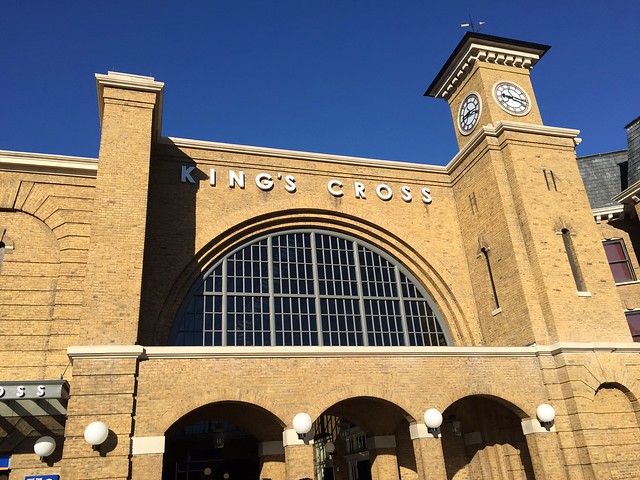 Honestly, I could probably write an entire post JUST on the Hogwarts Express/King’s Cross Station. There are so many awesome little details that they put into what is basically a shuttle! As you enter King’s Cross, there are fake muggle billboards advertising things like “Magic, the Perfume”, piles of luggage strewn about (including one trunk I spied with the initials H.G. on it), and a little snack shop that carries ALL BRITISH FOOD AND DRINK ITEMS. Stuff like Prawn Cocktail chips — sorry, I mean, crisps — and REAL Mars Bars that you can actually buy while you wait in line. 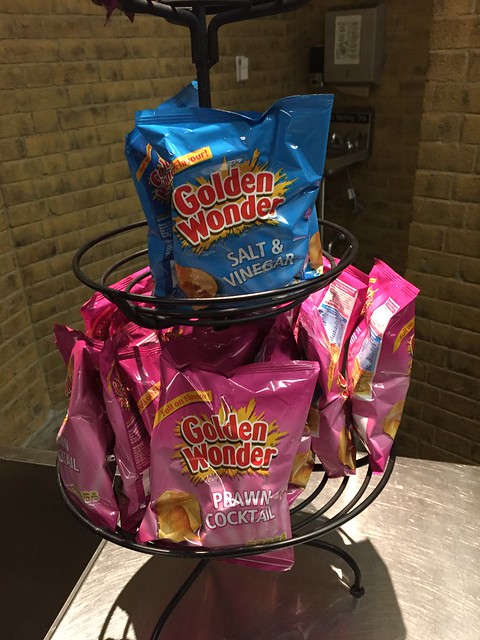 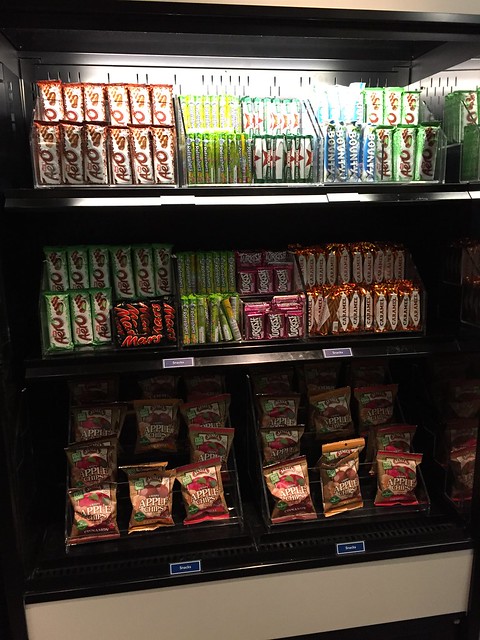 There also is a really special way that they did the entrance to Platform 9 3/4. I SO wish I’d gotten a picture of it, but basically they have a pane of glass up that works like a hologram and makes it really look like the folks in front of you are disappearing through the wall between platforms 9 and 10! Ungh, it’s sooooo gooooooddddd. 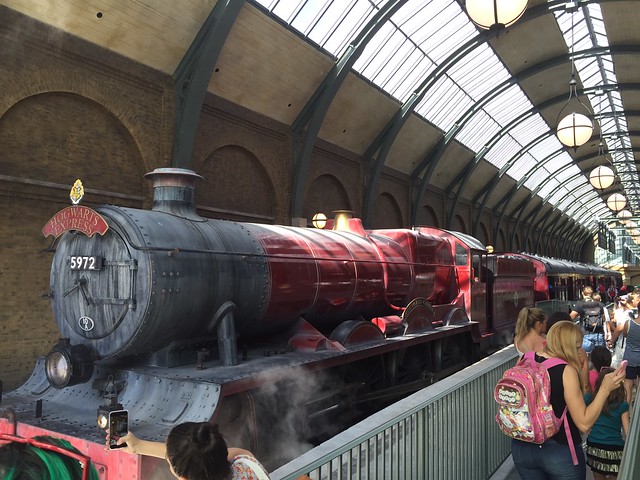 So yeah, for those of you who might end up debating about whether to get a Park-to-Park ticket, if you’re any kind of Harry Potter fan you’re definitely going to want to do it, even JUST for the experience of going through the Hogwarts Express stuff. Plus, c’mon, are you honestly telling me that you’re gonna go all the way to Universal Studios as a true Potterhead and NOT get the park-to-park ticket? 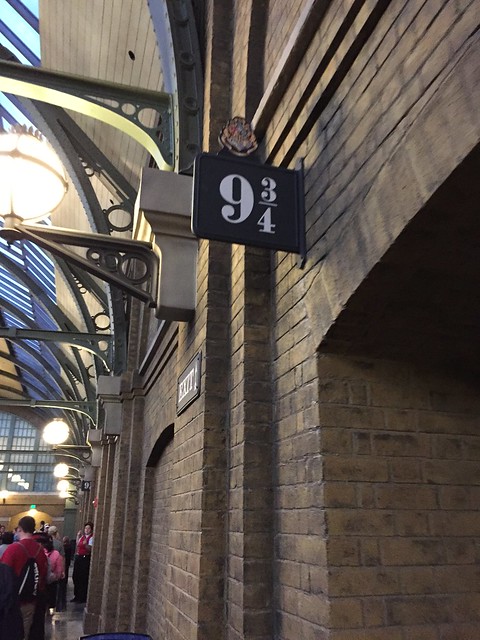 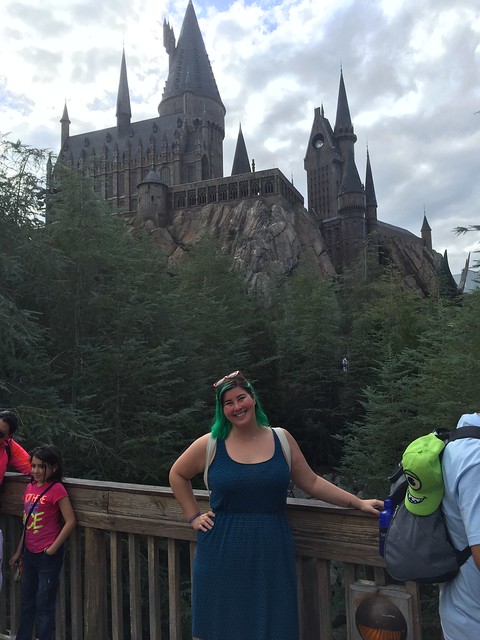 I mean, at the very least Hogsmeade still has Hogwarts, amiright? And I’d been to the Hogsmeade side before and it was still just as great the second time! They also made a couple of changes that helped space-wise, like moving all the merchandise that used to be at Zonko’s Joke Shop over to Weasley’s Wizard Wheezes, which left a much more open, easier to navigate space inside Honeydukes. And that really worked out well for me when I decided to peruse the shelves at Honeydukes because, well, I just hadn’t spent enough money yet. 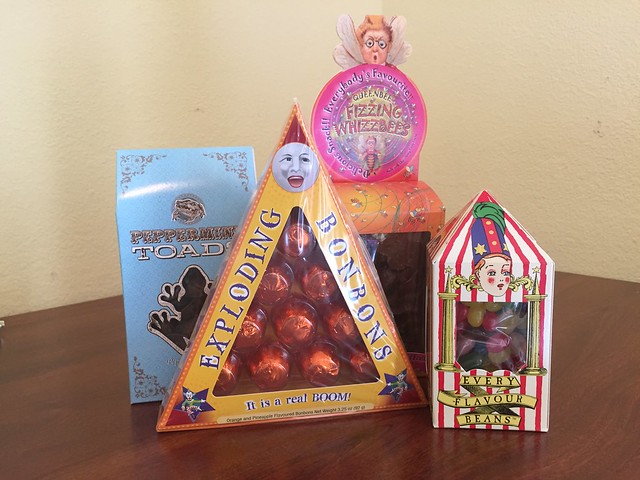 You’re looking at $40 worth of candy that will probably never be eaten, FYI.

And so, my friends, that about does it. There are more than a few things that I left out because I A) definitely didn’t take enough pictures (too busy stifling my tears of joy) and B) there is just SO MUCH it would literally be impossible to describe within the confines of a single blog post.

But, hey, I tried. And anybody who is planning a trip down to Universal Orlando in the future, I’m more than happy to answer any questions you might have! I know it basically seems like I spent every minute of my time at Universal immersed in Harry Potter World, and while I may have wanted that to be the case, we did manage to fit in some other stuff too:

So, yeah, best trip ever still seems to sum it up.