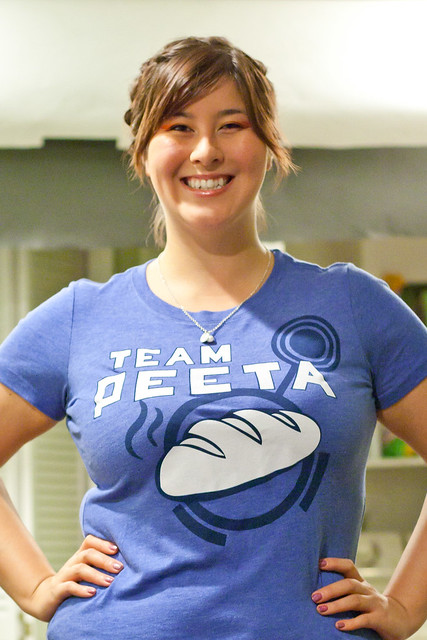 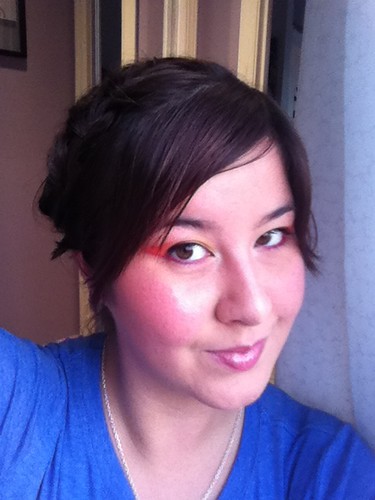 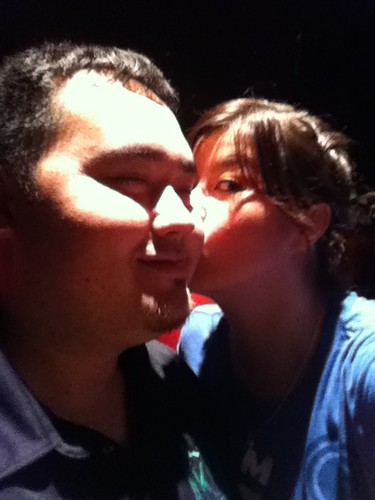 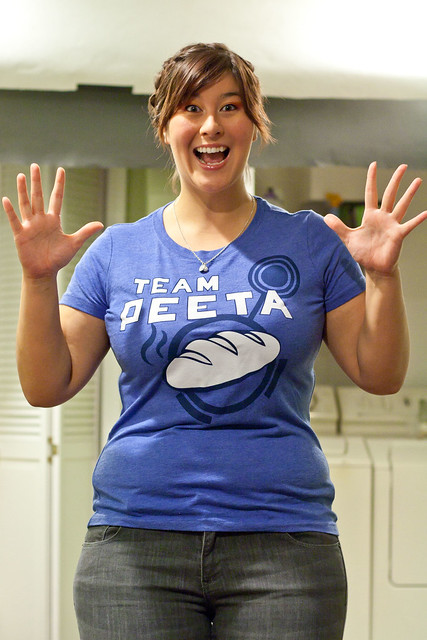 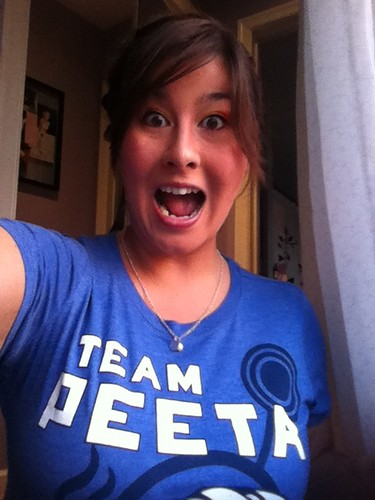 First off, thank you all so, so much for your supportive and encourage comments in response to my doldrum-dwelling, pity-party post yesterday (alliteration FTW!) Yesterday was indeed a much better day, and I know it’s mostly due to the fact that you guys are all so awesome.

Of course, in terms of lifting my spirits, it didn’t exactly hurt that this happened: 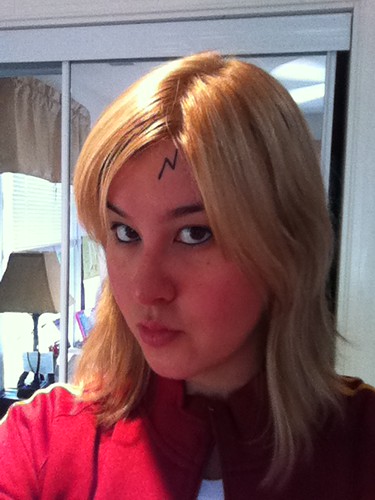 I know. Sometimes I shock even myself with my coolness. 😉

Fair warning: I was petrified about them forcing me to put my DSLR back in my car (like I’ve had happen at the movies before) so I didn’t bring it with me, even though once I got there tons of people had huge cameras and nobody seemed to care. Sigh. So that’s the explanation for the poor-quality iPhone pictures that follow. Ah well. 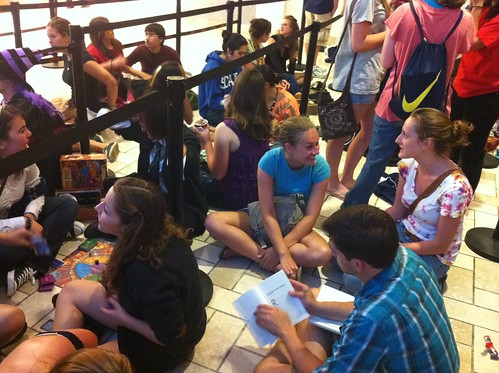 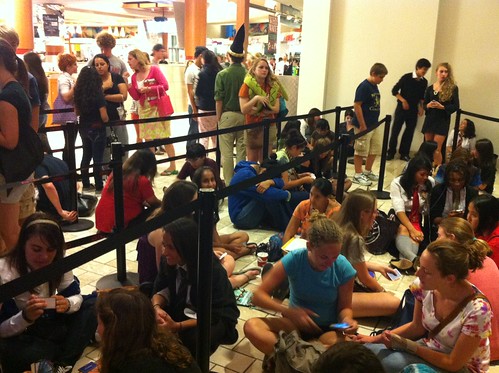 My fellow nerds were out in full-force, and it was glorious. 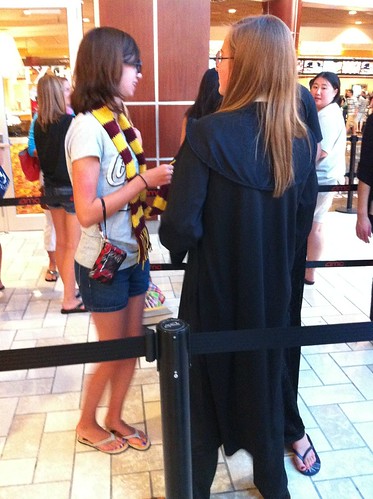 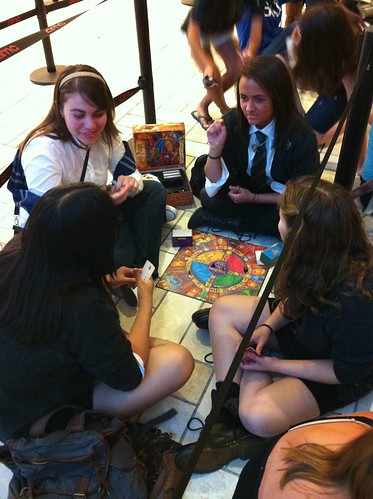 While I went the subtle route and merely donned a Gryffindor track jacket I procured from Hot Topic roughly 6 billion years ago (on which I received many compliments, thankyouthankyou) and a scar (natch), some people really went all out. I couldn’t get pictures of all the creative costumes since I already felt like a creeper (what with being at least 5 years older than everyone around me, as well as lurking by myself, haha) but there were some really great ones! Lots of people went the traditional route with the school robes, wizarding gear, etc, but there were plenty of people dressed in pillowcases who came as house elves (cute!) and a few Golden Snitches hovering about too. I also had a very interesting encounter with a Luna Lovegood in the bathroom — she pulled a Gnargle out of my hair. Quite considerate of her.

I got to Tysons around 8 PM, for which my brother teased my mercilessly but I was grateful. I only waited in line for a little over an hour before they let us into the theatre! 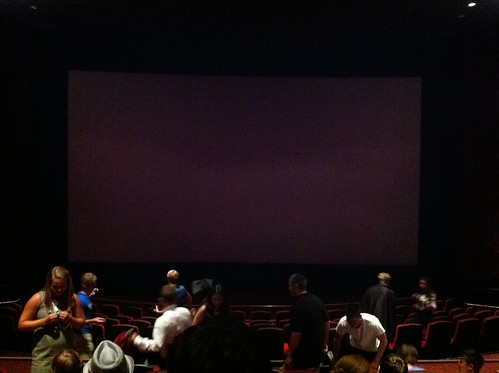 I got a boss seat, too. Huzzah! Granted, I still had 3 hours to kill at this point, but at least I could do it in comfort. Much, much better than the huge cluster that happened at the last movie’s midnight showing. 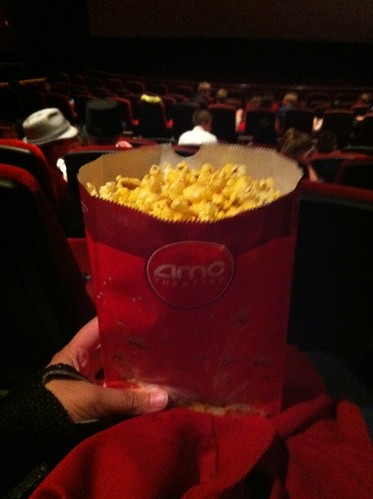 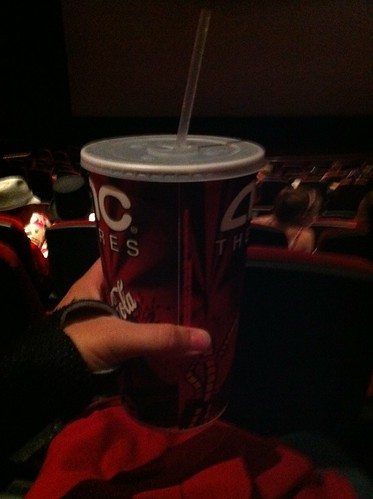 So I made myself comfortable and yes, I did go for the full movie experience with popcorn and a diet sodie. I am not ashamed! Can you believe that’s a MEDIUM soda though? Whoosh.

I did a little light reading… 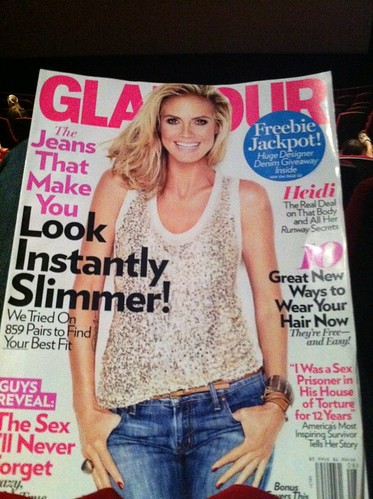 I had brought a veritable cornucopia of entertainment for myself, including a book, shows loaded on my iPhone, etc, but I didn’t actually end up dipping into anything other than the magazine. It was fun just observing the other fans (I felt SUPER old. Teenagers were EVERYWHERE.) and texting my fellow fanatical Harry Potter friend, Jeff, who was up in Maryland, things like:

Me, 11:47 PM: I am actually starting to hyperventilate.
Jeff: I’ll ask Madame Pomfrey to stop by.

Because yes, in fact, we are that cool. (If you don’t get the reference, well, that sounds like a personal problem that needs to rapidly be rectified.)

The group of teenage girls sitting next to me were pretty entertaining, actually. Though a little on the evil side, it would seem. After all, this was happening: 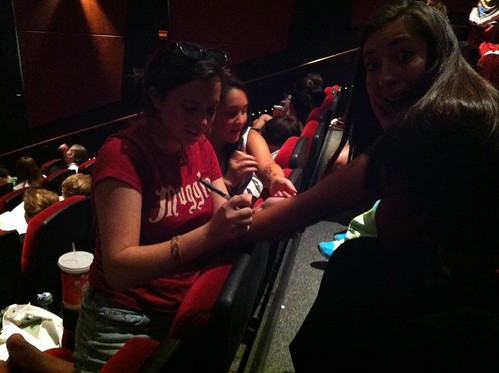 Which resulted in them all getting branded with the Dark Mark: 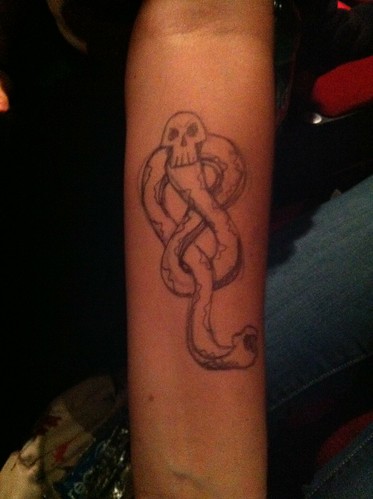 I politely declined, of course. I ain’t no Death Eater, yo!

The time actually passed very quickly, and before I could say “Deluminate!” the lights were down and it was time to don my 3D glasses and get the party started! 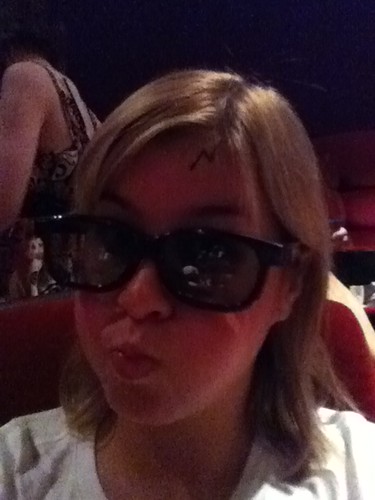 I don’t want to go into too much detail here, because I know that there are people reading this who haven’t read the books. So if you saw the movie, be sure to keep your comments spoiler-free! That being said, I will sum up my opinion of this film in one word:

Was it different than the book? Of course it was.

Were there things left out that would have been nice to have included? Of course there were.

Would I change a thing? No.

It was perfect. It was the most exhilarating, emotional, action-packed 2 hours I’ve had in a while, and I loved every second of it. I laughed, I cheered (always the best part of seeing a midnight showing), I cried (um, duh.)

It was so good. So, so good. So good, in fact, that I felt drunk when the credits started to roll. Drunk on Harry Potter. Sounds about right.

On my drive home, I did get fairly somber though. The entire ride was spent thinking about the movie I had just seen, and how it really felt like the end of an era. I’m sure that this won’t really be the last thing Harry Potter-related to ever be released, but it is the last movie of the original saga, and that means something to me. It’s okay if you think that’s cheesy. I embrace my cheesiness with pride, as all true Potterfiles should.

I envision many, many more viewings to come. I want to be there to witness other people drawing this epic adventure to a close, to soak in every last detail, to give justice to the story that has been my constant companion and the character that has been my friend as I’ve grown.