So I learned a few things over the weekend. 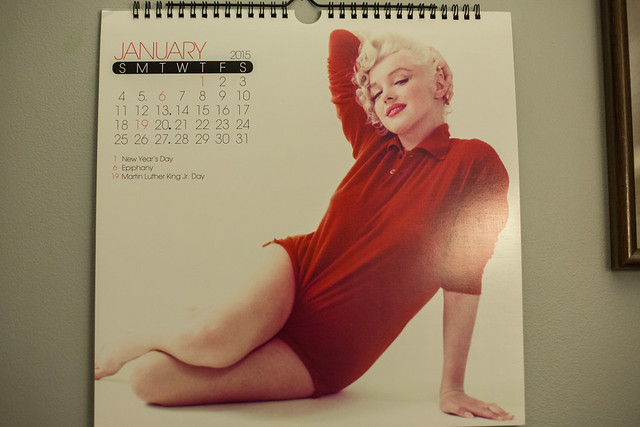 #1. Mid-January is evidently the best time to buy a new calendar.

Sure, you miss out on, uhh, knowing what day it is for a couple of weeks, but you save big money! Some random store at the mall was advertising 75% off calendars, so I snagged this smexy Marilyn Monroe calendar for a whopping $3.97. #girlcrush 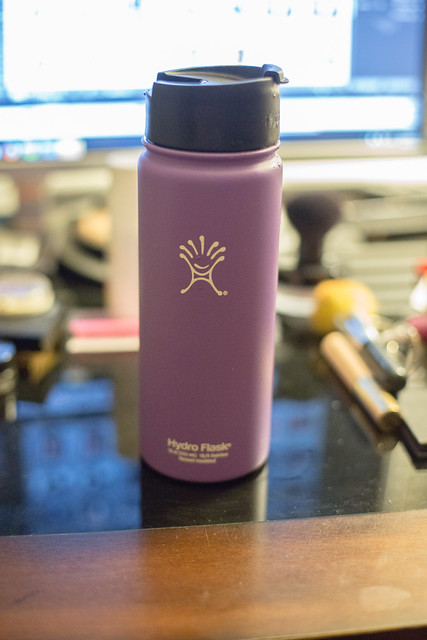 #2. I don’t know why I’ve ever bothered drinking from any water bottle other than my Hydro Flask before.

I bought one over the summer after witnessing its magical cold-maintaining powers at the pool one day thanks to my friend Lara. Despite sitting out in the summer sun for an hour and the outside being hot to the touch, the inside water was still ice-cold! Literally, there was still ice inside! Epic.

I kind of forgot about it after the summer heat faded, but dug it out again recently as I’m trying to increase my water intake (given this whole thing where working out makes me sweat about 50x more than I used to… and I’m already a really sweaty person…) and I’m still so impressed by it’s Elsa-like powers to keep my water iceeeey cold. I know that it’s winter, but drinking copious amounts of water is SO much easier for me when it’s cold. I think cold water just tastes better.

#3. My body doesn’t want me to be sane anymore.

Here’s the skinny (HA, apt choice of words) on losing weight this time around: It. Is. Not. The. Same. As. Last. Time.

I’m just a little over two weeks into my — shudder — journey (I really hate using that term, but hey, you gotta call a spade a spade sometimes, eh?), so I realize that this may sound super whiny and annoying and entitled and generally make me sound like a brat, but I am feeling super discouraged right now. Why, you ask? Well, because despite carefully tracking my food (I use My Fitness Pal) and working out six days a week, I have yet to lose a single pound. So, here’s the thing. Logically, I can kinda understand. My body is “adjusting.” Maybe it’s holding onto some extra water. I’m on my period (sorry dudes.) I get that there does technically exist some kind of reason why this may be happening.

I don’t really know what that reason is.

And emotionally, I am not able to make peace with it. Because the last time I made some serious changes to my eating habits, you know what happened? I lost TEN POUNDS in one week. Yes, back in August of 2010, the very first time I started counting my calories, tracking my food, and cleaning up my diet, I had lost ten fracking pounds by the second time I weighed myself. I kid you not.

Now, again, LOGICALLY I realize that it was almost all water weight, that I was probably super bloated from my terrible eating habits and blahblahblah. It’s not like I was really expecting the exact same thing to happen this time, but I did expect SOMETHING to happen. I mean, even with all my admittedly half-hearted attempts to reinvigorate/kickstart my weight loss over the past couple years, I’ve at least been able to drop a pound or two in the beginning. You know, before giving up again. Heh.

Look, I know that weight loss isn’t supposed to be my main focus this time, my overall health and fitness is. And that’s still true. I am genuinely excited about the non-scale related changes that I am starting to see — completing P90 moves faster or more easily, my waistband leaving a shallower impression in the skin on my stomach, being able to hold a plank for more than 5 seconds (seriously, that’s how about how long I could manage the first time), feeling something that resembles muscles underneath my squishyness.

But, all that being said, as someone who, in the past, has really only measured her progress by the numbers on the scale, it is still SUPER frustrating that I am not losing anything. Frustrating and so, so discouraging. I just don’t understand how the scale can be staying the same when I AM seeing the above-mentioned changes!

If I was doing something blatantly counterproductive to my weight loss, that’d be one thing. If I was accidentally overcompensating for my new workout regimen by eating way more than I’m burning, if I was not actively tracking my calories and thus there was a big disparity between what I thought I was eating and what I was actually eating, well, that would explain things.

But I’ve been tracking my food and counting my calories quite diligently over the past 10 days. I’m averaging between 1500 – 1600 calories/day (some days lower, some days higher, of course), so wouldn’t you think that I should have shifted down a pound or so by now? Am I eating 100% clean? Of course not. But even if I ate, say, pizza, I kept my portions in check, logged it, and compensated with my food for the rest of the day.

Even if I was underestimating my calories and logging less than I’m actually eating (which is technically possible, since I do have to making estimations when I eat out and whatnot), I can’t imagine that the difference is so great that I’m actually eating at maintenance level for my current weight. I mean, I weigh a lot. So, even without working out, or hell, even without walking around my daily life, my BMR is around 1,900 calories just sitting there, doing nothing but breathing.

I really wish I could blame this on something. I know I talked above about how there might be a few reasons why things are progressing so slowly this time, but there’s no real way for me to know for sure what the reason is. And I honestly think it would make me feel better if I could just figure out what specific something is making the numbers stay stagnant. If I could identify the problem and attempt to “fix” it.

But, sadly, for the most part, there doesn’t seem to be anything I can pin this on. Nothing apparent to me, at any rate. And while I’d love to be able to lay claim to the old adage that “muscle weighs more than fat” (technically a fallacy — muscle is more compact than fat, so it takes up less room, but a pound is a pound), that really shouldn’t be a factor at this stage in my fitness, or at my current weight.

I know that I need to keep a level head about this. After all, these things take time, and two weeks is barely any time at all when you’re talking about a lifelong journey (there’s that word again). And I know I really shouldn’t compare this time to the first time, because there are so many factors that have changed. I’m older, for one thing. I’ve already lost and gained a significant amount of weight, so my metabolism may not be functioning quiet the same way. And the fitness thing is, as I’ve already explained, a really big change for me, so maybe it is just taking my body some time to figure out how to deal with that, haha.

It’s just… hard. I don’t want to feel like this — emotionally tied to a stupid number on a stupid scale. I want to be able to be confident that what I’m doing is making a difference, whether the scale wants to admit it or not. I want to feel proud of hitting milestones like two weeks of daily workouts — a real achievement for my lazy ass! — instead of despondent because it’s not working fast enough.

But… I also want the reassurance that what I’m working for (because it really does feel like work right now) isn’t in vain. I want to be able to see myself doing this — eating well, working out, leading a fitter life — well, I dunno, like, forever? And it’s just hard to really imagine that without receiving any kind of incentive or motivation along the way. I mean, you wouldn’t work at a job you didn’t like if you never got paid, right?

But hey, I just gotta stick with it, right? Discouraged or not, unmotivated or not, I keep going. I whine a lot, but I keep going. Who knows, maybe this week will be the week that things regulate and the number starts dropping. Or maybe once my monthly ladybusiness is all tied up and I’m feeling a little bit more balanced, I’ll just feel differently. Maybe I’ll be able to focus more on the positive notes that I totally glossed right over in this post, haha.