Yesterday brought some pretty big news around these parts… 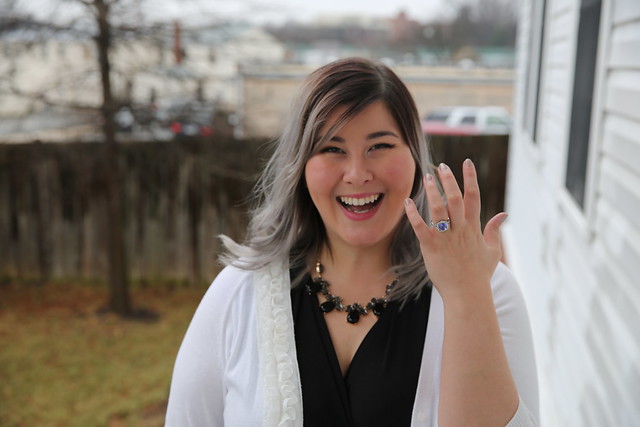 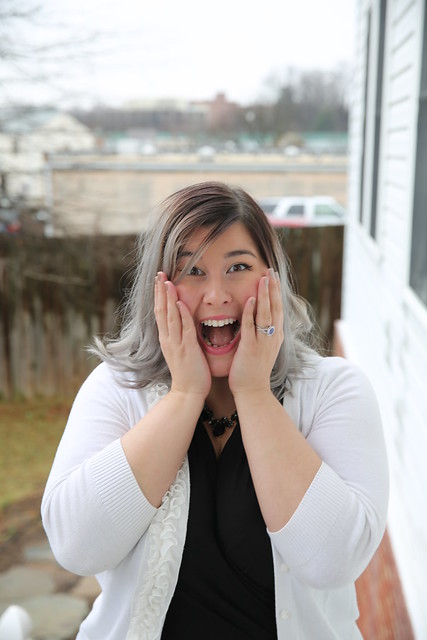 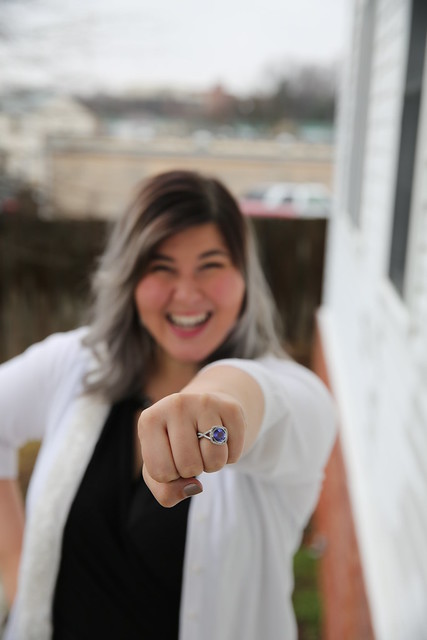 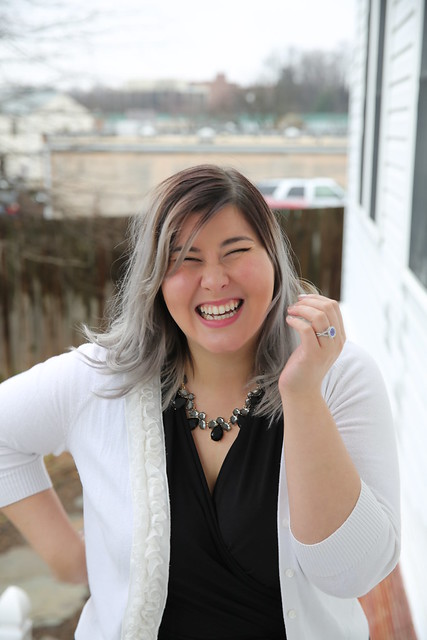 Three years, two months, and one day after I first laid eyes on Sean, he popped the question and I, of course, without a second thought, tearfully accepted. 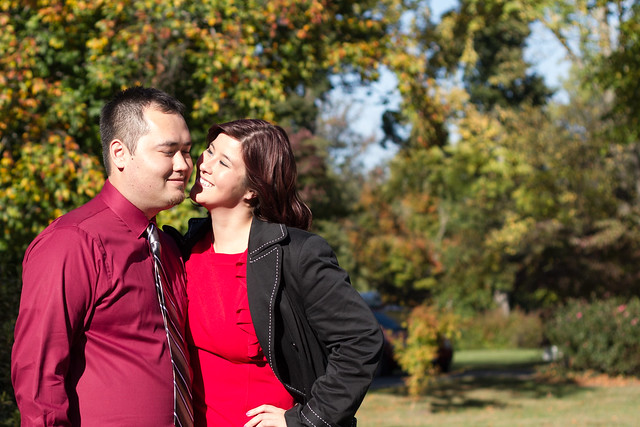 Needless to say, I am totally, completely, and utterly blissed out. It brings me endless joy to know that I’m going to get to spend the rest of my life with my main squeeze, and even though our engagement is barely 24-hours old, I’m pretty sure I’m going to enjoy being engaged to this studmuffin.

I’m sure it comes as no shock to the majority of you that I’m not exactly a, er, subtle person. In fact, I would often describe myself as having a rather ostentatious personality. I enjoy being the center of attention, I like making a splash, and I make no apologies (hardly any, at any rate) for living my life, well, loudly.

Sean, on the other hand, is the opposite. He’s much more introspective, much more reserved. Where I am loud and oftentimes obnoxious, he is quiet and respectful. Where I am all emotion, he is logic and reason. And where I am over-the-top, he is subtle and deliberate. 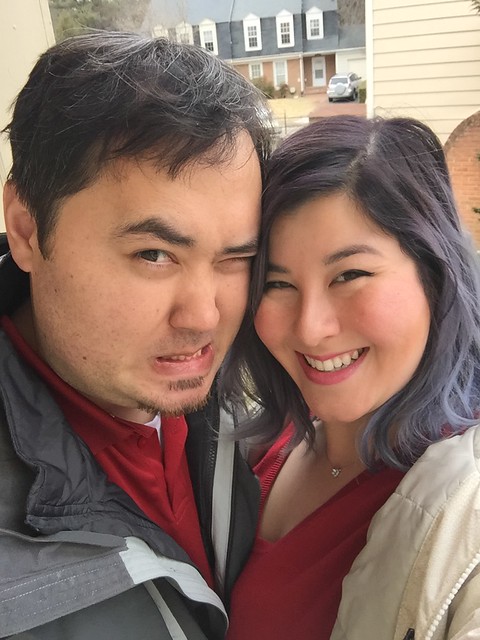 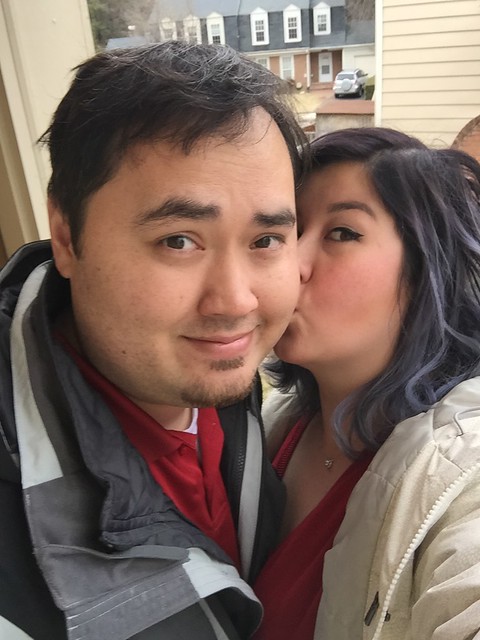 That’s not to say that we are total and complete opposites. We do, in fact, align on a lot of things — we have common interests, we both acknowledge the importance of family, we communicate affection similarly, we have the natural bond that exists between Whasians (jk, jk), and we’ve both got a touch of weirdness (okay, maybe more than a touch in my case.) But, that being said, we do have fairly different natures that tend to balance each other out.

Sean’s proposal to me was the embodiment of everything he is: quiet, intimate, romantic, and subtle.

As a self-professed insane consumer of wedding-related media (damn you, Pinterest!), I’ve always tended to stray more towards the big, the loud, and the ostentatious. I imagine that if I were the one planning a proposal, it would include things like scavenger hunts, flashmobs, and solid gold piñatas. And while sometimes that sort of thing is totally fitting and appropriate, I do know myself. And I know that if I were on the receiving end of all the hubbub and pomp and is-this-Pinterest-worthy-ness of a proposal like that, it would totally eclipse the actual point of proposing at all.

Thankfully, Sean’s personality leads him more towards things like quiet moments, small surprises, and heartfelt words — all of which his proposal had in spades.

Okay, so we’ve covered that I’m totally crazypants, right? Good. Because I feel like that is going to be an important point to remember as we move forward. 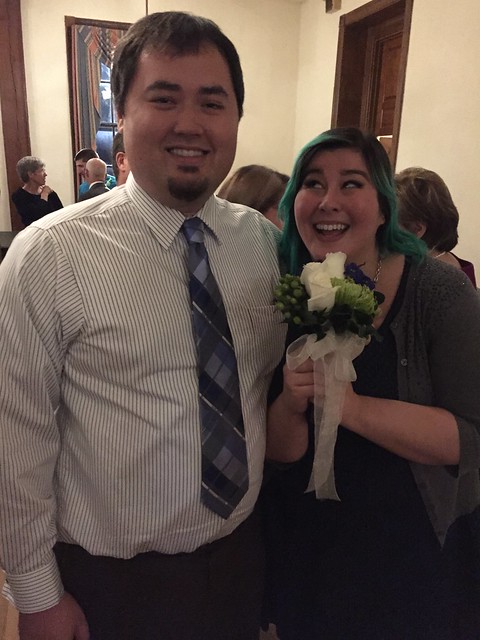 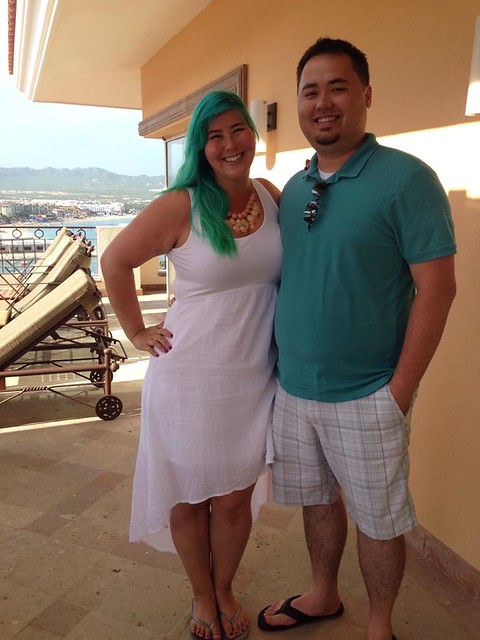 See, I pretty much knew I wanted to marry Sean like, oh, I don’t know, six months into our relationship? That’s probably being quite generous, actually, but I’d like to try to keep myself in the category of “humorously crazy” rather than “batsh*t insane.” I mean, in my defense, they do say that when you know, you know, and what can I say? I knew.

That being said, I do believe that relationships require time to mature, people need time to grow together (and prove that they aren’t going to grow apart anytime soon), and so our decision to get married was one that grew out of our love and companionship, over time.

Once we reached a certain point, we started talking more seriously about getting married, ultimately culminating in Sean purchasing a beautiful loose tanzanite stone while we were on vacation last November. I’ve always known I wanted a tanzanite engagement ring (it’s my favorite gemstone), so I was thrilled when Sean suggested we take a look at some rings when we stopped in Nassau during our cruise. We didn’t end up purchasing a ring, of course, but Sean did set his eye on one particular stone and I certainly wasn’t going to argue with that! 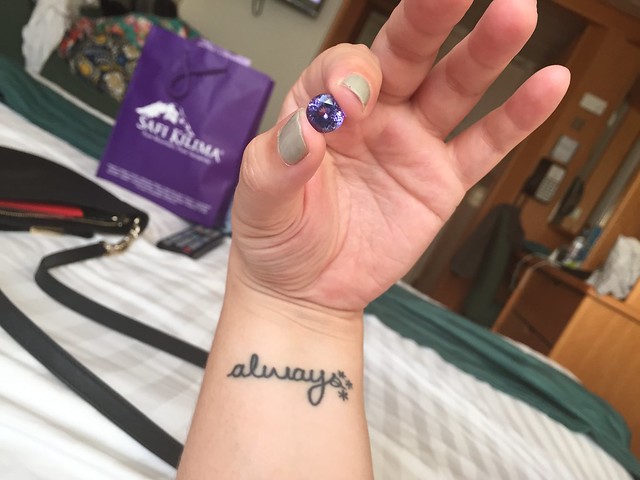 So we flash forward a couple of weeks. I knew he had a stone, and I knew he had intentions of designing a ring to go along with it, but that was pretty much where my knowledge ended. I had no idea what his timeline looked like, or what to expect. (He did tell me that he wouldn’t be proposing on a “traditional” day, like our anniversary, my birthday, Christmas, etc.) But, of course, I did have a general idea that we were going to be taking this next step at some point in the not-too-distant future.

As you can imagine, that didn’t actually sit super easily with me. Crazypants McGee over here basically spent from mid-November until, well, um, yesterday, wondering, fretting, endlessly questioning when Sean was going to propose. Sean loves surprising me, so I knew it would probably happen when I least expected it, but that didn’t really stop me from expecting it… all the time.

I mean, okay, I wasn’t really expecting it ALL the time. It was just kind of there, hovering in the background of my brain. There was really only one time that I genuinely thought he might be getting ready to pop the question: Remember that amazing early Valentine’s surprise dinner he took me to at Sushi Taro? 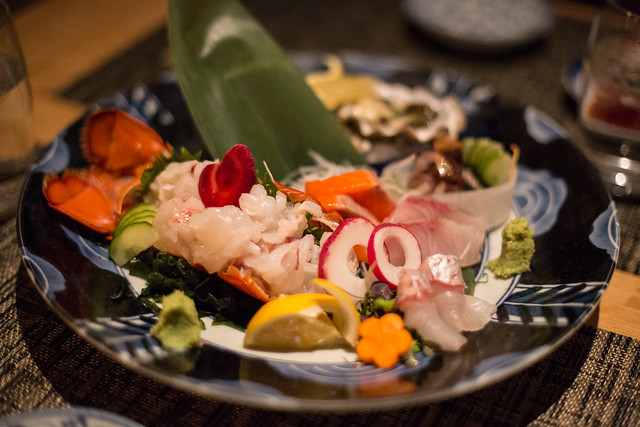 Yeah… I may or may not have left the post-dinner breakdown I had in the car out of my original blog post, hahahahahaha.

Aaaaaanyway, given that I was still just generally aware of the fact that the whole engagement thing was sitting somewhere on the horizon, I really wondered how surprised I could possibly be when the time came. But, lo and behold, Sean did achieve that surprise factor. Somehow, he still managed to pull a fast one on me.

By proposing at 7 o’clock in the morning.

Yep. If you’re asking yourself, “Who in tarnation proposes to someone at 7 AM on a Friday morning?” Well, Sean does. And I love him for it. 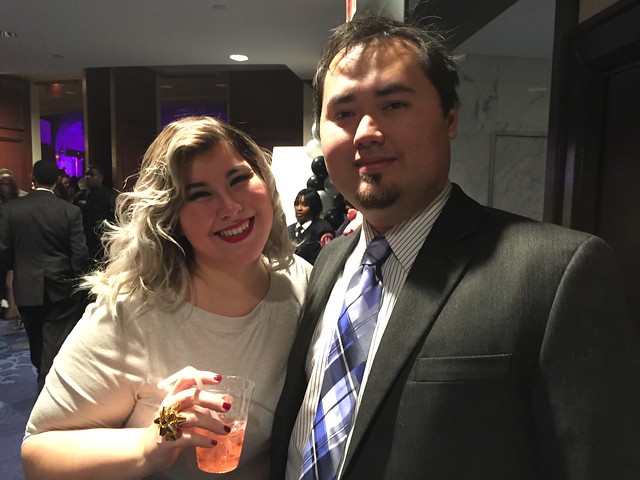 I woke up to an absolutely breathtaking ring hovering in front of my face (attached to Sean’s hand, of course.) My eyes were half-filled with shock, half with sleep, as he launched into an amazing (and tearjerking) speech about love, the two of us, and our future together.

Most of what was said is an emotional blur at this point, but I do remember him saying he chose the morning not only to surprise me (mission accomplished, fyi), but because he wanted me to know he loves me just as I am — bedhead, smudged makeup that I definitely did not fully take off the night before, and all.

And then, of course, I remember the part where he said, “Will you marry me?”

I’m pretty sure you guys can guess what my answer was. 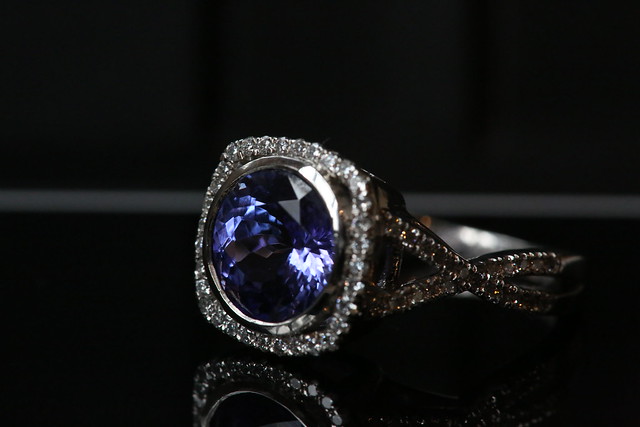 As mentioned above, I’ve known for a very long time that I wanted a tanzanite engagement ring. The reasons follow as thus:

A) I enjoy being slightly unconventional (I mean, you have seen my various hair colors, no?)
B) I’m not a big fan of the whole De Beers diamond monopoly engagement ring scam thing. (This hilarious College Humor video explains it all.)
C) Diamonds are actually my birthstone (April baby), so if I do ever change my mind and want a diamond, I figure I have a lifetime of potential gift opportunities to get one.
D) Helloooo, have you seen that color?? Is it blue, is it purple… who knows? Who cares?! It’s a different color every time you look at it, and it’s so beautiful. I love it, I love it, I loooove itttttt.

And Sean, the lovely, wonderful, attentive listener that he is, knew that tanzanite had me by the heartstrings. So, after procuring one seriously gorgeous round tanzanite stone, he set out to design a special setting to go around it, just for me.

And. Dude. Special it most certainly is. I honestly cannot picture a more perfect ring for me! He done good. He done reeeeeeal good, y’all. 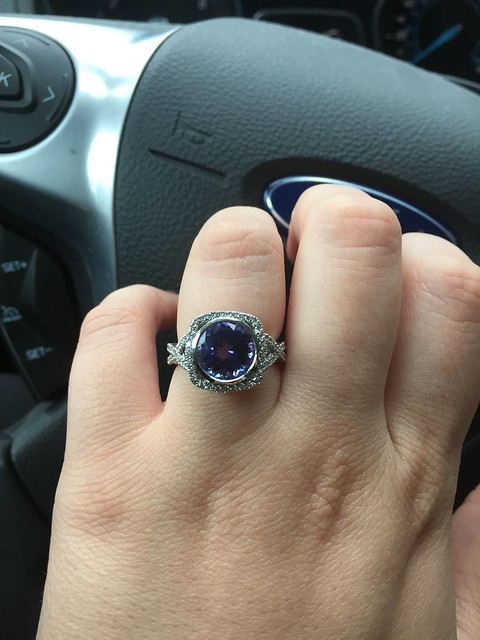 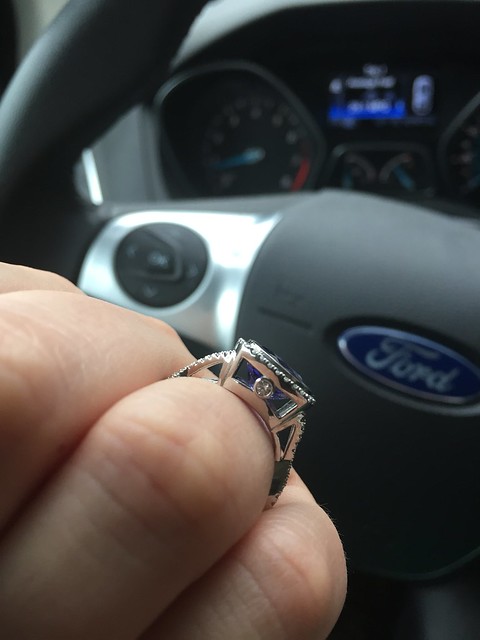 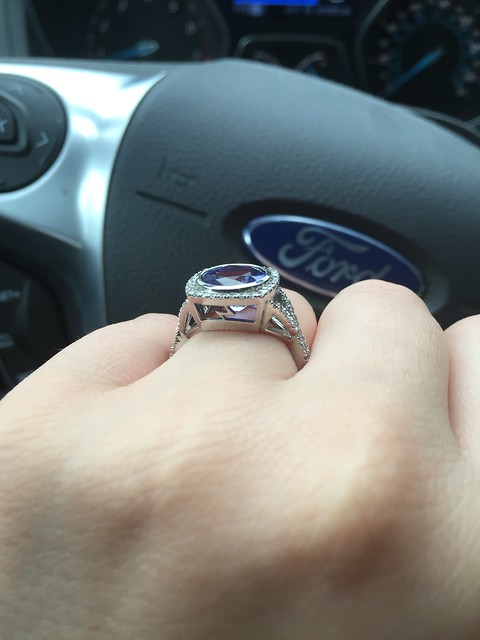 My ring is comprised of a round bezel-set tanzanite stone in a cushion halo, set in a platinum split shank twist band, and some very special, custom, made-just-for-me details included. On one side of the ring there’s a surprise diamond, and on the other… 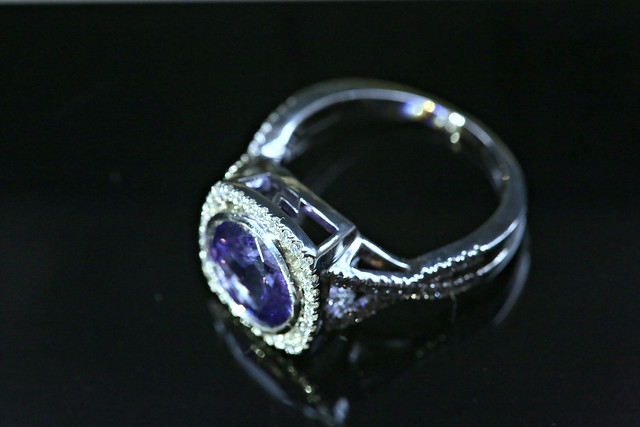 It might be a little hard to see in these pictures, but I promise it’s there. I mean, does Sean know me, or what? Some of you might think it’s silly to have anything to do with The Boy Who Lived on her engagement ring, but true love is as true love does, my friends. And if I love it enough to have it tattooed on my body…

Anyway, it is a super thoughtful touch that makes the ring extra special to me (and unique in general!) There’s also an inscription on the inside of the ring: “Until the very end.” ::sob:: ::sniff::

Tanzanite is much more fragile than diamonds are, so I’ll need to take extra care with it (hence why the bezel setting and the halo are so great — they help protect the stone!) but I could not be happier. As most people who have seen the ring seem to say, it just feels very “me.”

Sooooo, there you have it! I’m engaged! I’M ENGAGED! Man, that sounds weird to say. I mean, I’m somebody’s fiancee! Which means I’ll eventually be someone’s wife. WEIRD. 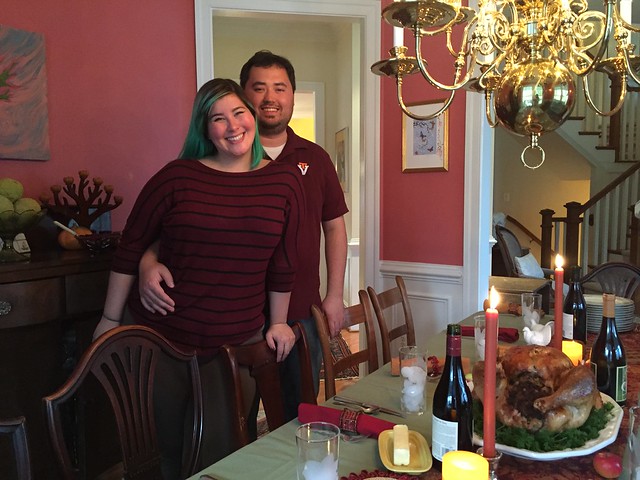 Here’s to a life filled with unintentional outfit matching!

As if the proposal itself wasn’t enough, Sean finished off what was already the best day ever with another amazing experience: dinner at uber-romantic Alexandria restaurant, Restaurant Eve. Sean treated me to the tasting menu there, another thing that has been on my restaurant bucket list for a while, and it was absolutely perfect. I just can’t believe that I get to marry this Fox! 😉

Admittedly, I am pretty stoked to get started with wedding planning and whatnot, being that I definitely come from that whole “has been planning her wedding since she was eight” camp of thought, but I also hope to spend some QT with my love, just enjoying this phase of our relationship — and our life! After all, if what I hear is true, it’ll be over before we know it.