Tess Holliday has been rocking headlines over the past week when she was announced to be the newest model signed to MiLK Model Management’s roster. At 5’5″ and a size-22, she is (by her own admission) essentially the biggest plus-size model ever to be signed to a major agency, an amazing feat in and of itself. I’ve followed Tess (known also by her birth name, Tess Munster) on Instagram for quite a while, always admiring her for, yes, her insane beauty and ALWAYS on-point eyebrows, but also for being such a fierce and admirable woman. She is the creator of #effyourbodystandards, a social media movement that preaches and promotes self-love, body-positivity, and acceptance regardless of size. 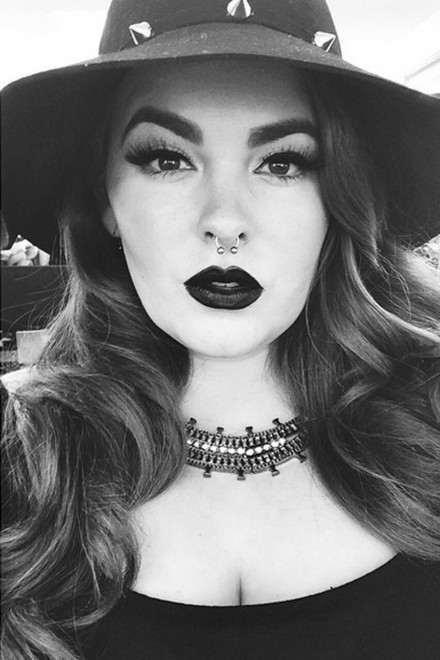 Now, it probably comes as no surprise (sadly) that Tess gets lobbed a lot of hatred and judgment on her IG account. I’d say about two-thirds of her negative comments seem to come from ignorant jerks (via such meaningful and eloquent comments as “Ew!” or “Fatass!” or, best of all, tagging their friends with a couple of laughing emojis), and the rest come from concerned citizens of the interwebs (“She’s beautiful, but you have to wonder if she’s healthy?” or “Her confidence is admirable, but promoting obesity is just as bad as being too thin!”).

Now, I don’t really feel like traipsing down the rabbit hole with regard to the idea of Tess “promoting obesity” because I honestly think that it’s flat-out ridiculous. The fact that Tess exists at her current size in no way means she is promoting or glorifying having a fat body. She’s just Tess. This is not about obesity glorification or the promotion of unhealthy habits. This isn’t even a discussion about Fat Acceptance or Health At Every Size or anything like that. It’s about accepting yourself in general, and I do firmly feel that Tess is a real champion in the body love and self-acceptance sphere.

Of course, haters gonna hate hate hate hate hate, so it’s a good thing that Tess is also a champion of shrugging of them haterz. And even if she wasn’t, she has more than enough loyal fans willing to jump into the fray on her behalf.

Besides, while hateful comments do always seem to find their way onto her posts, the majority of comments are ones of adoration and admiration. There are even quite a few heartwarming stories of the self-acceptance that Tess has inspired in her fans. Which are my favorite ones to read, of course. It’s really wonderful to see how Tess has helped others take steps away from self-hatred and towards self-acceptance.

But, alas, just like the negative comments come in various forms, comments telling tales of self-discovery and acceptance are not the only kind of “positive” comments that I see. No, the one I feel like I see more and more often on Tess’s photos, or on the photos of the many other strong and beautiful plus-sized women that I follow, and even occasionally on my own photos, look a little more like this:

“Your confidence is incredible! You go, girl!”

“You’re so pretty! I wish I had your confidence!”

And it’s these comments that never really sit that well with me.

Don’t get me wrong, it’s not that I don’t appreciate the sentiment being shared here. I know that these comments are well-intentioned and, in fact, accurate. Tess is confident, and confidence is sexy. Tess is a very beautiful woman who has no reason not to be confident in her beauty… other than, according to society, the fact that she is fat.

Because people don’t say, “OMG! You’re so confident and inspiring!” to folks who aren’t fat. They don’t say it to your average straight-sized model, or to someone who doesn’t have some kind of obstacle in front of their beauty — whether it be their weight, a scar, an amputated limb, whatever. You don’t say, “I wish I had your confidence!” to someone who has no reason not to be confident. To someone whose beauty you have no reason to question.

It all reminds me of this quote from the ineffably wonderful Mindy Kaling:

It’s the same when people say, “You’re so brave!” I’ve gotten that one, too. Like, really, I’m brave for putting a picture of myself on Instagram? I’m pretty sure that impulse stems out of my personal vanity, not some drawer full of bravery that I have on reserve.

I mean, jumping in front of a car to push someone out of the way is brave.

Standing up for someone being bullied is brave.

Going to teach children in Ghana or build houses in Chile or rehabilitate Russian sex workers is brave.

Having the strength to leave an abusive relationship is brave.

But just, I dunno, living my life at an above-average weight? Not being ashamed of myself because I’m not conventionally thin? Really, that’s what is considered brave? Oookay.

Now, sure, for Tess, maybe it is a little bit brave. But only because she knows that every time she posts a photo of herself online, she’s going to experience so much negativity for it. So it’s not the actual act of putting herself out there that is brave, it’s doing so in our current fat-shaming culture. I know that if I were in her shoes and received the kind of crazy, in-your-face, outspoken hatred that she receives on a daily basis, I imagine it would take a heckuva lot of bravery for me to keep doing what I was doing too.

I don’t think that the general standards of what is considered “beautiful” are really going to change anytime soon. Take a look at Greatist’s article about how the standards of beauty with regard to body shape have changed over the past century to see what I’m talking about. Even with the variations in the cultural norms of the time, there’s not THAT much of a difference in what’s “ideal” — it’s still best to be slim, to be tall, to be white. But, that being said, I do think that other aspects of our societal attitude towards beauty is starting to shift. It’s becoming more and more acceptable to, well, accept yourself, even if you’re not that perfect size 6. We’re starting — just starting — to put more of an emphasis on how you feel about yourself than how you look to others. On loving yourself, whether you consider yourself a work in-progress or totally happy as-is. And even though there are tons of hateful people and “concerned” citizens and inflated egos that might be working against her, I think that Tess Holliday is helping to tip the scale in the direction of love.