I know that I have already declared it to be so, but it bears repeating: I hate running. Yesterday’s torturous 3-mile jaunt around the hallowed streets of Falls Church only served to reinforce this fact. But, I did it anyway, since I’m training for the Reach the Beach Relay in May and will need to be able to complete three separate legs of 3 to 4.5 miles each. (Which I know is nothing compared to what the rest of my teammates will be running, but it’s a lot for me!)

So, as mentioned, I took to the streets to take advantage of yesterday’s beautiful weather, and also used it as an opportunity to test out one of the clothing items that New Balance sent me a little while ago. I gave the Prism Run Shorts a try — my first time running in run shorts — and what did I find? I found that I do not, in fact, like running in run shorts.

I really should have taken these photos pre-run, haha.

Yes, having now officially tested the gamut of running legwear, I can officially say that running in shorts is not for me. Maybe things would be different if I had thighs that didn’t touch, shorts that had no way of riding up, and confidence that would stop Giselle in her tracks but alas, that is not the case. I was blessed with Powell thighs, and Powell thighs touch. Good for all that pioneerin’ and baby-makin’. The chafing! I’ll need some serious Astro Glide if I’m to continue running in these puppies! Not to mention the whole thing where they rode up to my chatch and basically made it look like I was running down Broad street in a bikini bottom. I’ve really come around to my legs as a beloved body part, but I’m pretty sure nobody needs to see that. 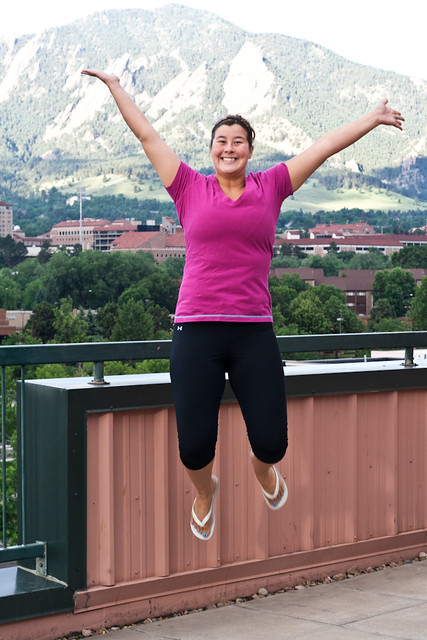 I’m willing to give the other pair of running shorts and the running skirt that NB sent me a try, but I’m skeptical as to whether I’ll find them any different. They’re a smidgen looser/longer though, so who knows? As of right now, however, I’m pretty sold on my past capri-lovin’ ways. I don’t really like running tights except for when winter weather necessitates them because I find them too constricting (and they get pulled down more easily as I go along), but capri-length fitness pants are my jam. Despite all of my personal issues with actually running in the shorts, they’re very comfortable. They’re definitely booty shorts, so again, this may simply be stemming from a confidence issue. Regardless, I will absolutely keep them in my arsenal for non-running fitness activities. They’d be perfect for hot yoga!

What is your run wear of choice? Are you a shorts person? Fellow capri lover? Running skirt fanatic?