So it’s been a little over a month since I wrote about my struggles with weight loss. Not the normal, why-is-losing-weight-so-hard struggles that I’ve been talking about for the past two years on whole, but whether or not I want to continue the whole “weight loss” aspect of this here weight loss blog at all. It’s been a month of me trying to make peace with my body, a month of seeing how I feel without also feeling like I need to make excuses to you guys for why I haven’t been posting my weigh-ins. A month of trying to live in my body, as-is, to see how it fits.

Unofficially, I’ve really been off the weight loss wagon much longer. My last official weigh-in was May 2nd. That’s pre-Reach the Beach, pre-St. Maarten, and pre-Summer in general. And let’s be honest, even my efforts up to that point had been pretty lackluster: gain a pound, lose a pound, gain two pounds, lose two pounds, etc.

I think that now I can officially say that enough time has passed, enough energy has been expended, and enough thoughts have been, uh, thought, that I can say the following:

I am ready to start losing weight again.

Go ahead, roll your eyes. Scoff. Choke back your witty but sardonic remarks (or let ’em rip! Your call).

I understand. Really, I do. I know I’ve been here before. I’ve said these exact words so many times, they’re old hat by now. But that doesn’t automatically negate the authenticity of my intentions, does it? Just like with my original attempt at weight loss, all those months (now years!) ago, I’ve realized that these things just need to happen when I’m really ready for them to happen.

I’m a rebel. Okay, okay, fine, let’s call me what I really am: a brat. Evidently it would seem that I have to do things my way, in my own time, or they’re simply not going to get done. I climbed almost to 250 pounds before I was ready to change my life the first time around. Didn’t I realize that I needed to lose weight at 220 pounds? 200 pounds? Of course! Did I make halfhearted attempts to do so in response to bribes from my parents, subversive messages from the media, derisive looks from my skinnier coworkers? Sure! Did any of them work? Hells no!

I started this blog as a means to keep myself accountable for my weight loss, and it worked wonders for me. At first. I skimmed off 60 pounds and felt like I was on top of the world. But then, as time passed and my progress slowed, and as other things (good things!) started to cement themselves in my life, posting my daily eats and weekly weigh-ins just stopped working quite as well. Things felt perfunctory, and I felt like the only reason I was even still going was because I felt like I had backed myself into this corner with a big sign over it that read “NOT 165 POUNDS YET”. I felt like I needed to keep going just because this one time, over a year ago, I said that I had a specific goal in mind. It wasn’t about me being happy with my weight or my body or my lifestyle.

At the time I started this blog, I was supremely unhappy with a lot more than just my weight. I was in a job that I disliked, I was single, and I was generally just in a pretty low place. Now? I am fulfilling my dream of writing a book, I have a wonderful boyfriend, a thriving social life, and am just so happy most days that I probably annoy the crap out of you. < /brag>

But that doesn’t mean that I still shouldn’t want more for myself. And I think I am finally at a place where I’m ready to take back the original intentions of this blog: not just to lose weight in a vague, ethereal sense, but to put in place one more element of my life that I haven’t been truly satisfied with. I’ve actually been thinking all of this for a while now, but I wanted to make sure that my motivations for this particular recommittment (since there have been so many already) were finally coming from the right place.

So. Now that I’ve steadfastly declared that I’m back on board, let’s address the other part of this thing: my actual weight. Intentions are all well and good, but they don’t mean a whole lot if they’re not followed up with action (I feel like I’ve said this before, haha). This train is leaving the denial station starting now. (Get it? Back on board… train… anyone? Bueller?)

While I haven’t been going balls-to-the-walls with my eating this summer, I’ve definitely been partaking in more than my fair share of eating out and “celebrating”. A little too much Starbucks, and a little too little cooking at home. And though I have been (miraculously) maintaining some semblance of physical activity, that’s definitely not what it should be either (ughhhhh, exercise, bleh). I know that I’ve gained weight. I can see it in my face (and, oddly enough, in my upper arms), and I can feel it in my soul. (What, dramatic? Me?)

So here we are, just in time for Weigh-in Wednesday. Ready? (No.)

Okay, just let me absorb that for a minute.

Well, I can’t honestly say that I’m surprised. Actually, that’s a lie. I am a little surprised — that I’m not more upset by this. Don’t get me wrong, I did have a bit of an… emotional… response at first (shock!). But I guess I kind of already knew that if I’d gained enough weight for me to actively notice sans-scale, we probably weren’t talking single digit pounds here anyway. I mean, when you’re 5’9″ and have a large frame, 5 libbies here or there doesn’t really have too much of a physical impact, you know? So gaining 16 pounds in 4 months may seem like a lot — and it is — but we all know just how easy it is to gain weight when your healthy habits take a backseat.

I’m actually feeling, dare I say, optimistic. I thought I would crumple into a ball of hysterics at seeing a number that’s over 200 again on the scale, but it actually makes me feel like I really have something to work toward now. It feels like this means it won’t just be more weeks of back and forth, losing the same 2 pounds over and over again. I know it probably sounds crazy, but it makes me feel kind of like I’m starting fresh. Like, that was Act I, and then there was intermission, and now we’re starting Act II (and we all know Act II is the most exciting one). 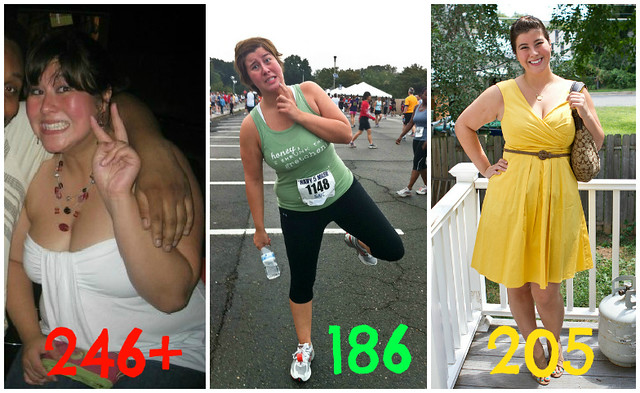 And hey, at least all my size 12 clothes still fit, so that’s something. Does weight redistribute itself differently when you regain it? Huh.

All right, this has been mighty wordy already, so I’ll cut myself off here. Hopefully attending (and speaking at!) HLS this weekend will only further my drive to see this through (though hopefully not in a burns-out-quickly, sensationalist way). The bottom line is, I’m ready. Here we go again… again.