You guys know I love to cook, right? Everything about cooking, I love. Chopping, dicing, mincing, searing, simmering, blending, whisking… I love it all! Of course, the main reason I love cooking so much is because I love eating, naturally, but I think there’s something in the act of cooking itself that calls to me as well. The catharsis of working in the kitchen, the instincts that creative cooking calls upon, it lights me up!

So it is especially great to be dating a guy that has a passion for cooking as well, albeit with a slightly different twist. Sean is an engineer by nature, and while my cooking philosophy is all about a dash of this, a smidge of that, let’s add this and see how it all turns out, Sean is fascinated by the nuts and bolts and science of it all. So as molecular gastronomy and modernist cuisine has made its way further into the mainstream, he’s been especially enraptured. And his interest in that side of cooking means that I get to benefit from all his investments. 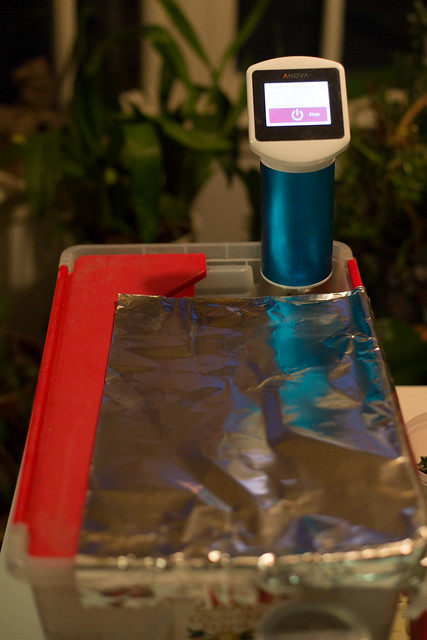 Including sous vide cooking! While I was staying at my parents’ place last week during Jen and Mia’s visit, Sean and I cooked up a feast of epic proportions for the whole fam with his shiny sous vide machine. 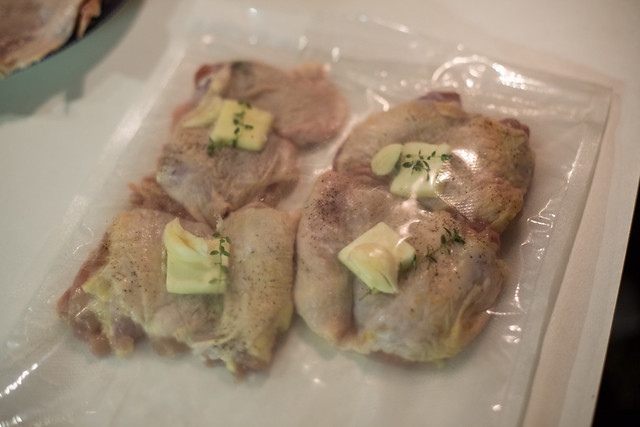 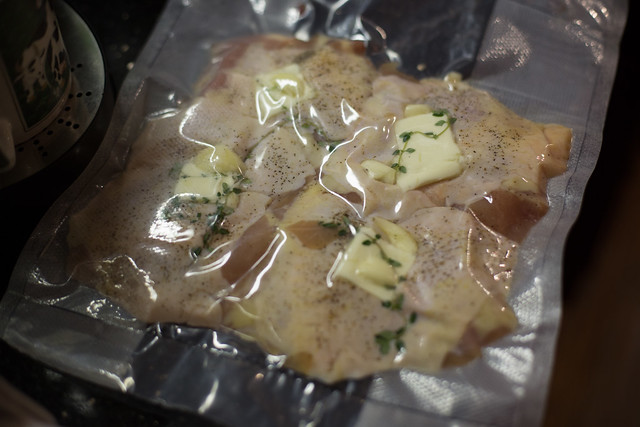 For those of you unfamiliar with the concept of sous vide, it involves cooking food sealed in airtight bags in a water bath heated to a very precise temperature. This method allows food to cook for long periods of time (depending on the type of meat, you can cook some things like short ribs and other tough cuts of steak for several days!) without losing flavor, overcooking, or breaking down, resulting in melt-in-your-mouth textures and full-flavors. 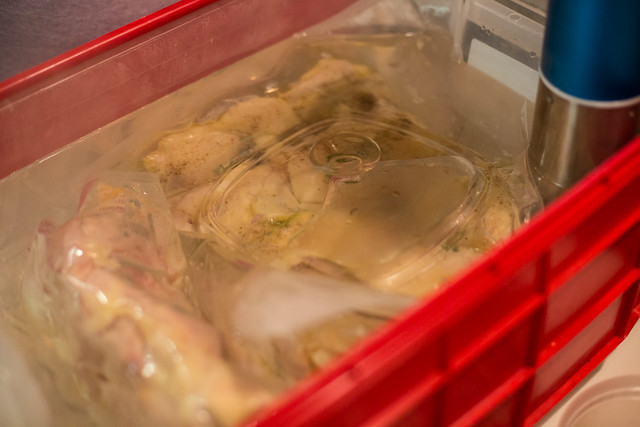 Sous vide tends to get a lot of screen time on Top Chef because it’s kind of a set-and-forget it method of cooking until it’s time to finish whatever you’re cooking, which frees up a lot of time to work on other stuff in between. Alongside the sous vide chicken thighs (and a roasted cauliflower steak for my vegetarian sister), I also whipped up some potatoes au gratin, green beans with caramelized onions, and a cauliflower puree. Mmm! 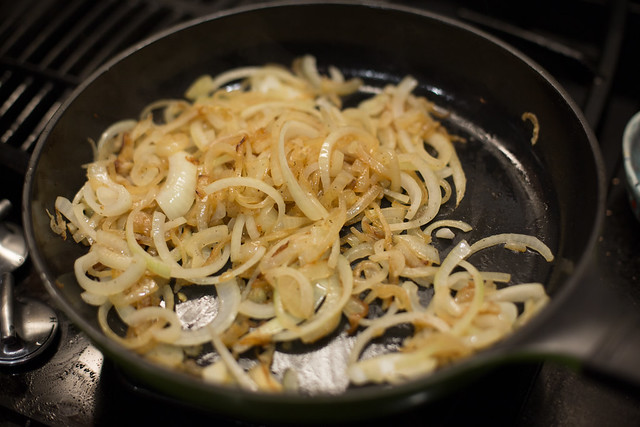 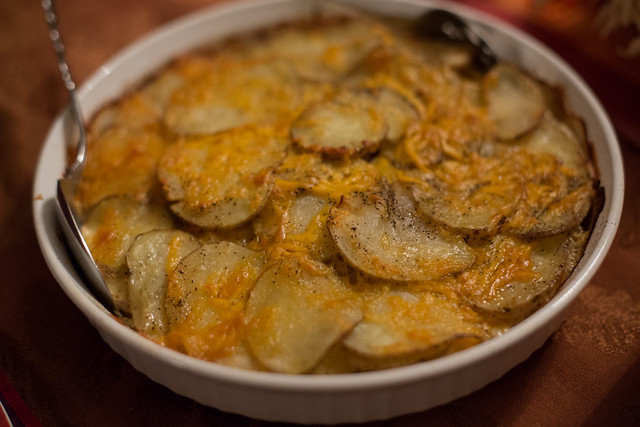 Now, speaking of finishing whatever is being cooked via sous vide, the one thing about this method of cooking is that it doesn’t leave food looking particularly aesthetically pleasing when it’s all said and done. After all, when everything is cooked perfectly evenly, with heat permeating from all sides all at once, no browning, searing, or crisping will occur. Which just means it needs to occur after the food is finished cooking in the sous vide! 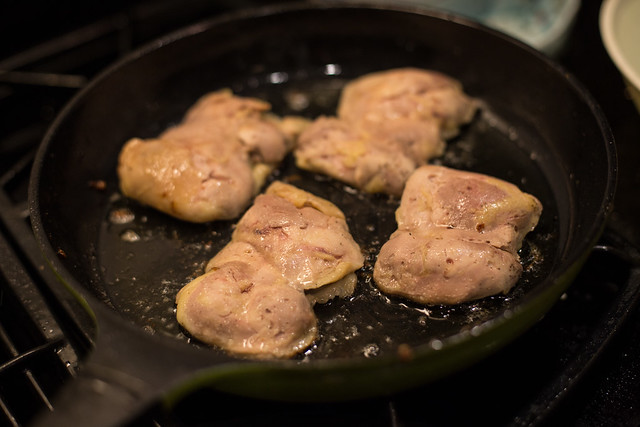 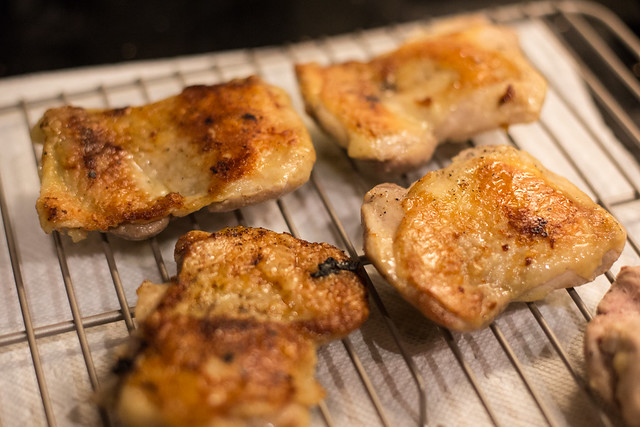 By searing food in a pan, on a grill, or with a cooking torch at the end of its cooking process, you end up with a delicious, crispy skin and some color that makes it look just as delicious as it tastes! We cooked the thighs for about 90 minutes in the sous vide, then finished it in a hot cast iron pan for just a minute or two on each side. The result? 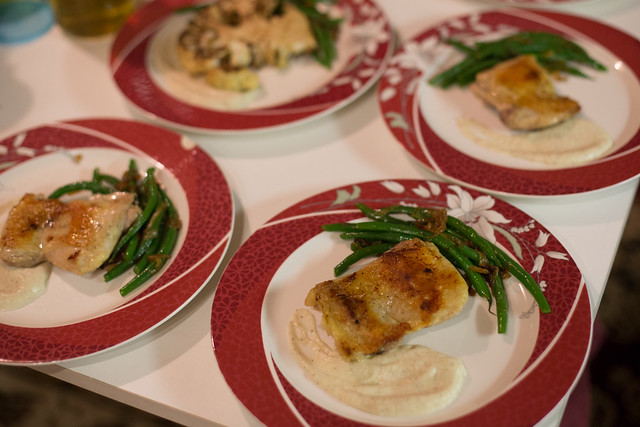 A fabulous meal that I was even more proud of than usual! The consistency of the chicken was absolutely perfect, with the flavor completely permeating every bite. We seasoned the chicken with salt and pepper, put a little bit of butter, some thyme, and garlic into each of the sous vide packs before cooking, and it all was perfectly balanced at the end. 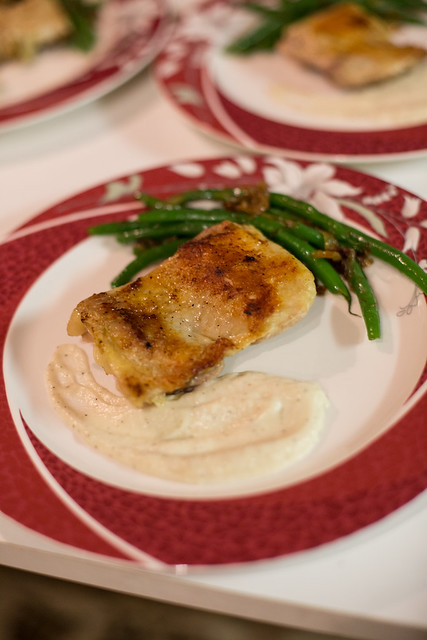 On the same night we did the chicken, actually, we also experimented with eggs cooked via sous vide. I didn’t know this before, but you can actually pop eggs — in their shell and all! — into the sous vide at certain temperatures for the perfect cooked eggs! 145-degrees leads to amazing, soft poached eggs, a little bit higher and you get soft-boiled, all the way up to hard-boiled! 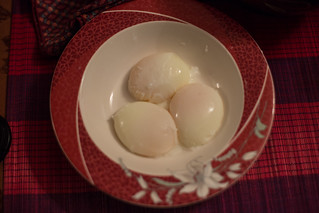 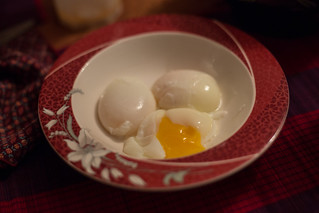 We cooked the eggs for just shy of an hour, and they were pretty much the perfect Eggs Benedict consistency. This is particularly great, because there’s no limit on the number of eggs you can cook at once! So we were able to make a dozen poached eggs for a big brunch we held at the house later in the week, and it was awesome.

I can’t wait to experiment more with this fascinating form of cooking! In fact, as you read this, Sean has some pomegranate short ribs going in the sous vide. We’re letting these ones cook for a reeeeeeeeeeally long time, so here’s hoping it works out just as well as this one did! 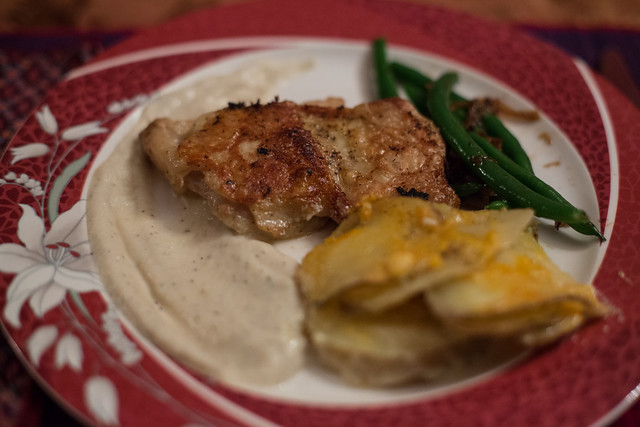