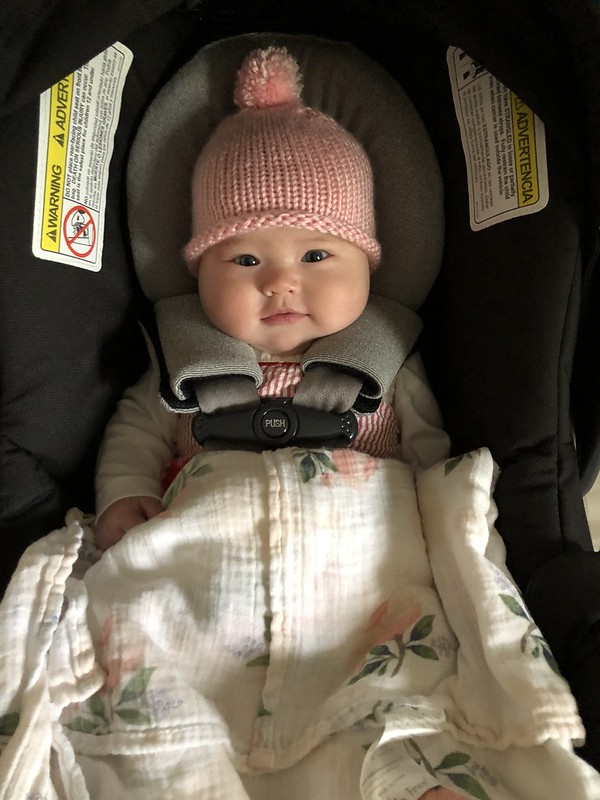 It’s official, winter is definitely here! It’s been pretty mild weather-wise up in the DC area until this past weekend, when we (and most of the Southeast) got our first snow of the season — and Penny got her first snow EVER! 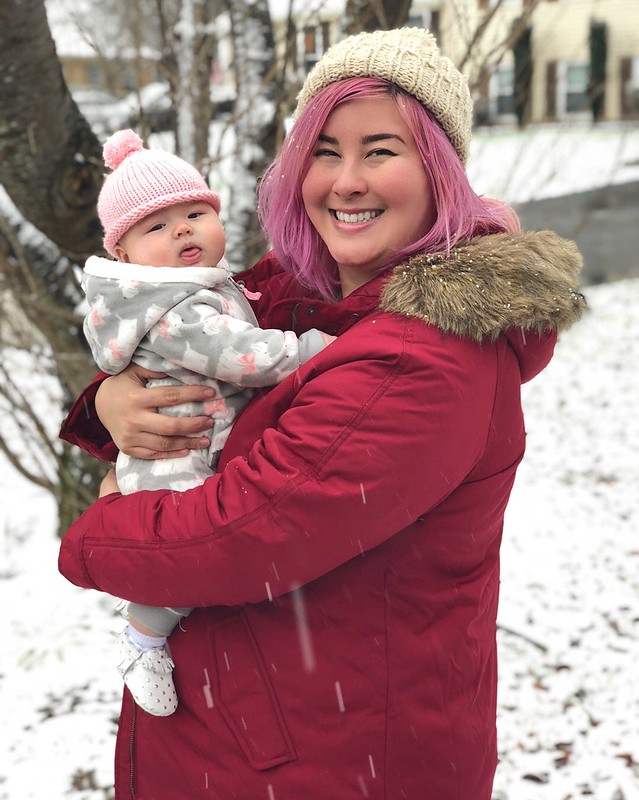 I took Penny outside briefly to show off the white stuff to her, and she showed that she truly is my snow-lovin’ daughter by sticking out her tongue the entire time. I like to think she was trying to catch snowflakes. 🙂 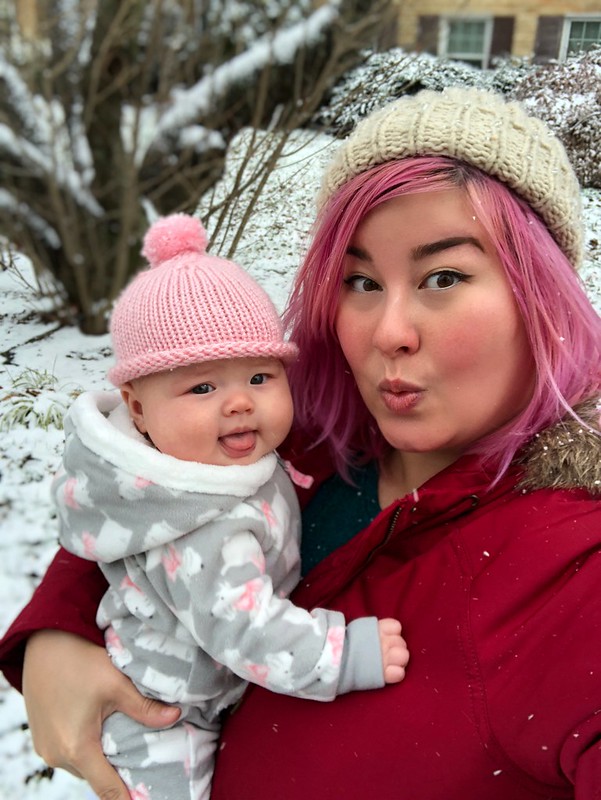 After all, snow is a big part of our family history — Sean and I got married in a blizzard! So she definitely comes by it honestly. I love snow! 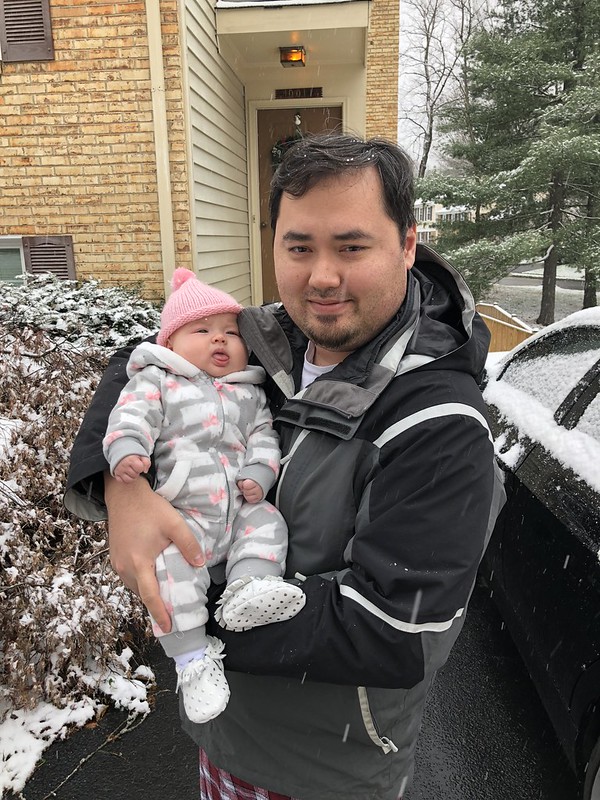 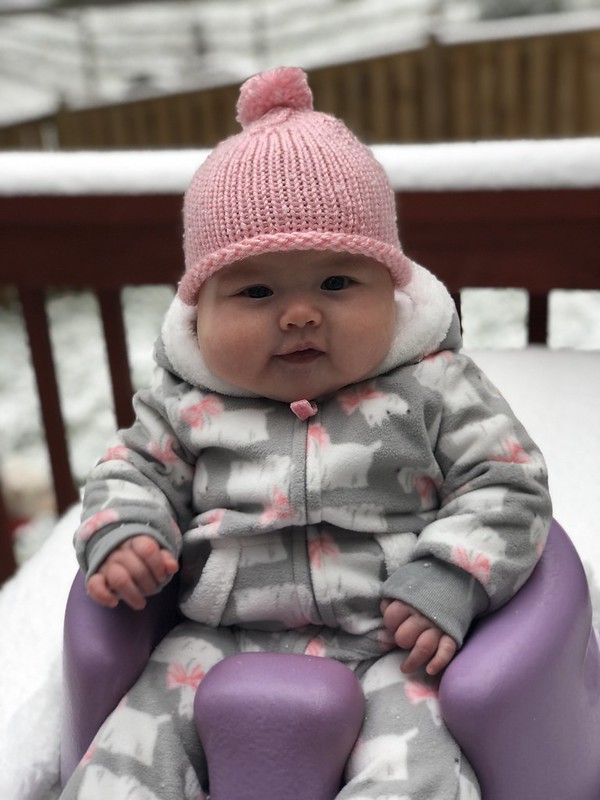 In other news, I’m soaking up my last couple of days of maternity leave with my little dumpling — I officially start back at Yelp on Wednesday. To get myself back in the work mentality, Penny, Sean & I crashed the last Yelp Northern VA Elite Event of the year (prior to going out on leave, I planned an event for each month I’d be out, and my awesome coworkers executed for me.) 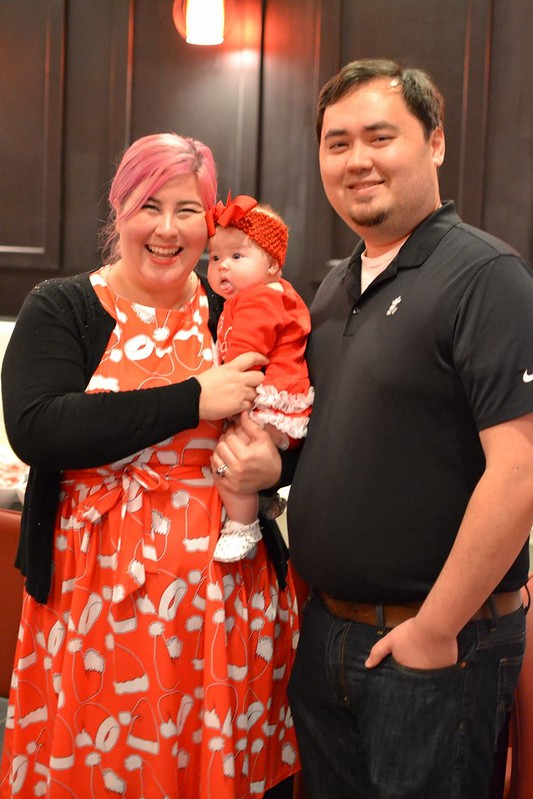 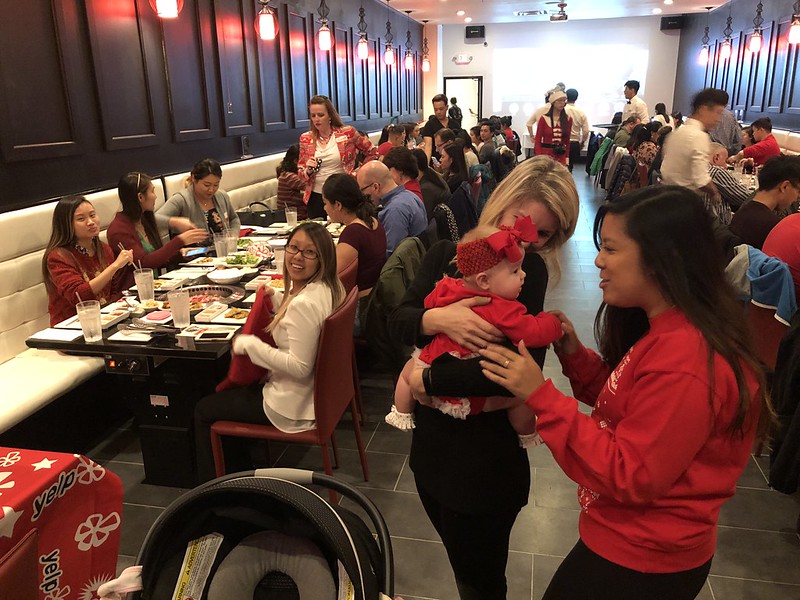 Penny was the star of the show, and seeing so many members of the Yelp Elite Squad as well as a bunch of my Yelp coworkers definitely helped get me excited to go back! It’s still slightly bittersweet, since I won’t be able to dedicate 100% of my time to my happy little nugget, but I fully recognize how seriously lucky I am to have a job where I both work from home and have a lot of flexibility, as well as a super supportive family that is helping to take care of Penny.

Plus, with me going back right before the holidays, I’m hoping that things will be a little bit slower so that I have time to dig through my inbox, get caught up, and ramp up at a nice pace just in time to kick off the new year right! 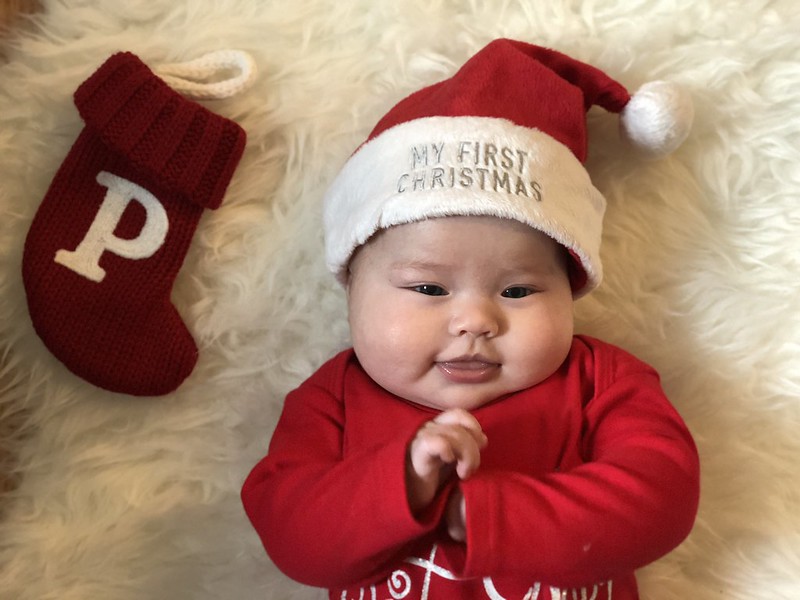 We’re definitely already deep in the holiday spirit in these parts. I was already a serious Christmas lover, but the fact that Penny is here this year makes everything even more special! 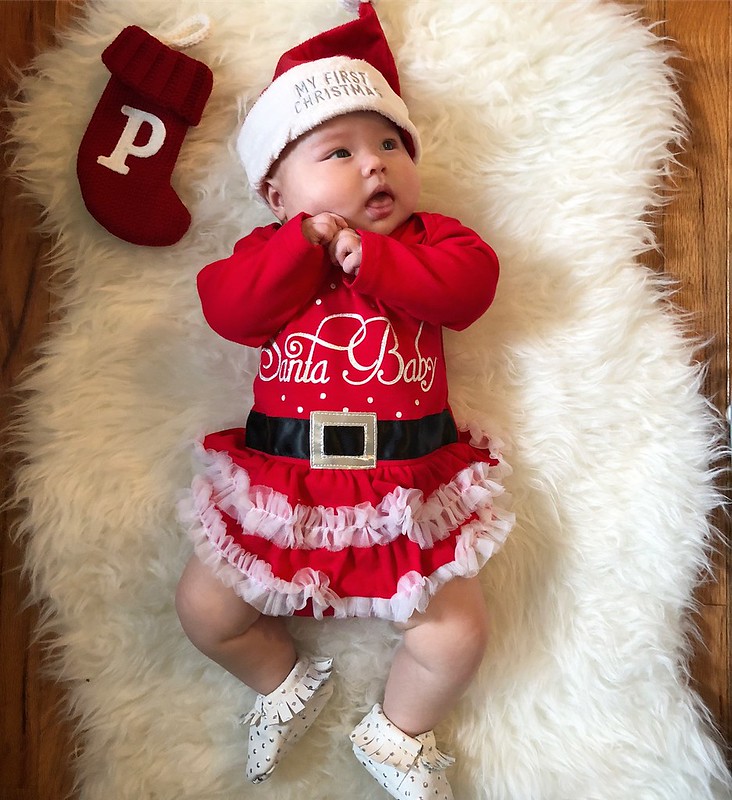 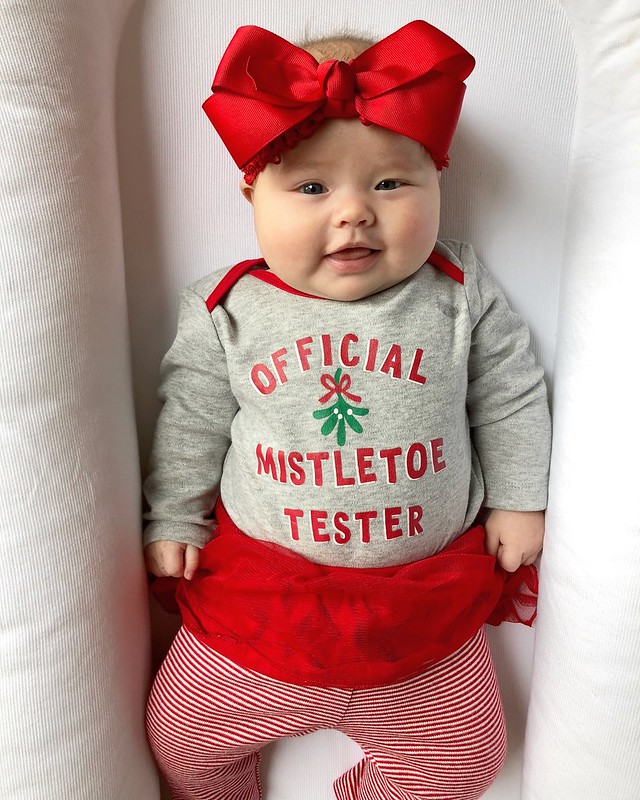 My sister, brother-in-law, and their kiddos are coming up to do Christmas here this year, so we’re starting to get my parents’ house nice and festive. Sean and I went over the other day to help set up the Christmas tree, which really makes things feel official! We didn’t get a tree for our own house (well, we have a super tiny tabletop one) because honestly I don’t even know where we’d put it with all the new baby crap we have, hahaha. So I’m going to be counting on getting all of my holiday cheer from the ‘rents house this year, hehe. 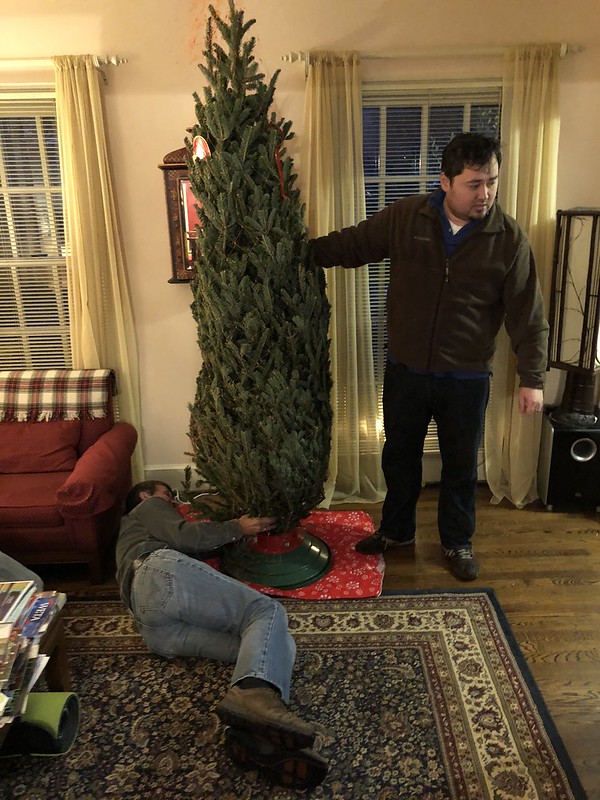 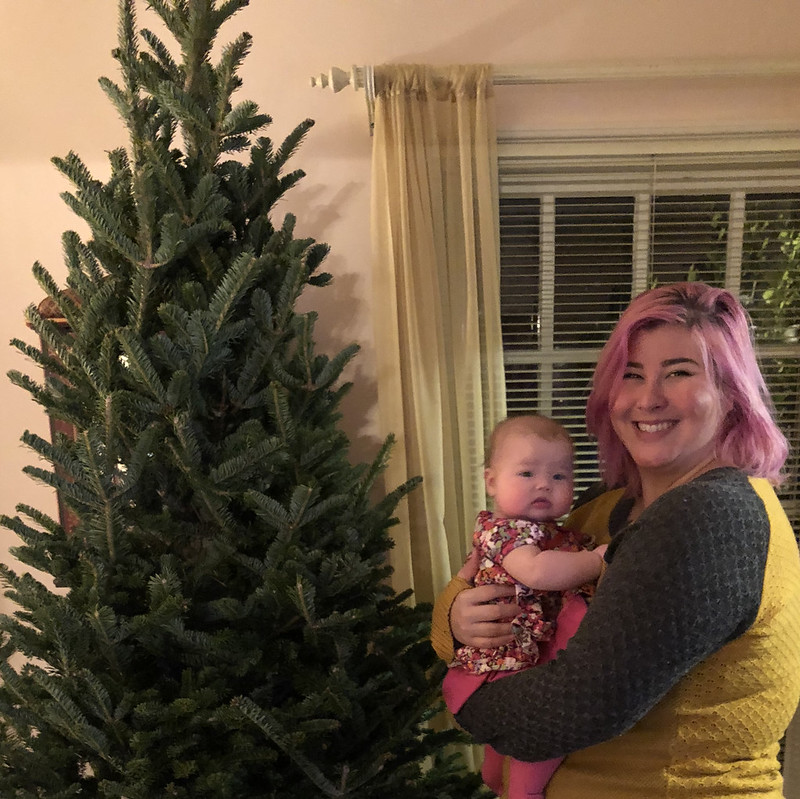 We’ll be decorating it later this week while we also celebrate my brother’s birthday… and after which we’ll be going to see The Last Jedi and I’m SOSOSOSOSO excited. My parents have been on retainer to babysit during this movie since I found out I was pregnant, lolololol.

Here’s to winter and the holidays and the absolute best time of the year! I think that tonight will call for cocoa and Christmas movies — I’ve already watched The Holiday twice (my fave!), and have been whittling away at Netflix’s catalogue of Hallmark/Lifetime/ABC Family made-for-TV holiday films, but I’ve got an itch to take in my first (of many) annual viewing of Elf! Gotta introduce Penny to Buddy the Elf!