I know I say this a lot.

“I’m getting back on track!”

Well, this should come as no surprise to you all, but I’m saying it all again. Of course, the difference is that this time I actually feel like I mean it.

See, I’ve been skirting around this whole weight loss thing for the better part of the past year, holding on to one not-insignificant, though often-inflated, accomplishment: the fact that I lost 60 pounds once. Hey, did you know I lost 60 pounds? I lost 60 pounds! I used to be obese and now I’m just overweight! 60 pounds!

And while my intentions really have always been to keep going, to lose just a little more weight, to follow through to my original goal, my actions weren’t doing much to prove it. No longer being completely disgusted with the way that I looked naked was making me think, well, maybe I don’t really need to lose any more weight. Or rather, maybe I don’t want to. But I kept blogging, I kept saying that I was recommitting, I kept pretending to strengthen my resolve because, well, I’m a weight loss blogger. That’s what I do. Oh, and didn’t you hear that I’ve already lost 60 pounds?

Then my girl Cassie wrote a kickass blog post earlier this month about facing the truth when it comes to her weight loss (or lack thereof), and it struck a serious chord with yours truly. I had wrapped up my identity so much in those 60 pounds I had already lost, I was blinding myself to my own truth. Under the false pretense of saying I’m content with how I look, or taking tortoise vs. hare metaphors and applying them to weight loss, or saying that I am purposefully trying not to slip back into my disordered eating habits, the truth of the matter is that I’ve just been lazy.

It’s never been that I don’t want to lose more. I do. Of course I do. I know that there are crazy tall and/or athletic women for whom 180 pounds looks like 140, but no average-height, soft, mildly athletic girl will ever tell you that her ultimate, ideal weight is 186 pounds. Even if she “carries it well”, or “still looks healthy”. Even if she really has made some outstanding progress in her weight loss so far. Yes, I started this blog at 246 pounds, and I lost 60 of them. But I became complacent. I stopped actively counting calories. Yes, I started exercising more regularly which is awesome for me, but I’ve also been eating pretty much whatever I want so as a result I’ve been gaining and losing, regaining and relosing, the same five pounds ever since. I don’t want to be stagnant anymore. I want forward motion.

I know I’ve said all of this before. And sure, there’s probably a high likelihood that I will be saying it all again at some point. But I do mean it. I am going to be making some changes. Or rather, making some changes BACK. In addition to the new habit I’ve picked up of actually working out/running a couple times each week (this is big progress for me, guys!), this week I’ve put my actions where my mouth (or rather, fingers) are.

I’m cutting back on my dairy consumption again, since I’ve been in denial about how much it wrecks my digestive system. And upset-tummy-Gretchen is a Gretchen who justifies french fries for lunch and pasta for dinner. I’m eating breakfast again — SO important for me, but something I’ve let fall by the wayside. I’m trying to shift my eating back into day-long grazing/5-6 small meals a day instead of the 3 squares a day that I’ve lapsed back into. I am going to start juicing again so at the very least I’m getting in vegetables SOMEHOW, and I’m going to be limiting my coffee intake (though not today. I really needed it today, haha). And I’m upping the ante on my water intake, since being properly hydrated (over hydrated, in fact) has been crucial in supporting all of the above for me.

Let’s see whether or not these “new” changes have gotten me off to a good start or not, after my post-birthday weight gain from last week, shall we?

Well, I’d be lying if I said I wasn’t hoping that I would have magically lost all 5.6 pounds I had gained over the previous two weeks, but I will most certainly take it. Here we go again. 🙂

PS: Since this post is starkly lacking in pictures, I offer you the following photo that Ben took of a very fluffy Daxter who weaseled his way into an under-bed storage box. You’re welcome. 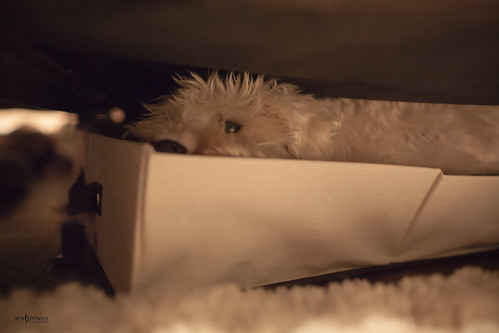