OMG CHRISTMAS IS ALMOST HERE IT’S SO CLOSE I CAN TASTE ITTTTTTT!!

So, hey guys! I know it’s a little unusual for me to post on a Saturday, but since my schedule is all messed up due to the impending holidays and whatnot anyway, I figured what the heck. Besides, I needed to document my culinary achievements from yesterday before too much time has passed anyway. Because, yes, yesterday, I made something MAGICAL. Spoiler alert, the end of the story looks like this: 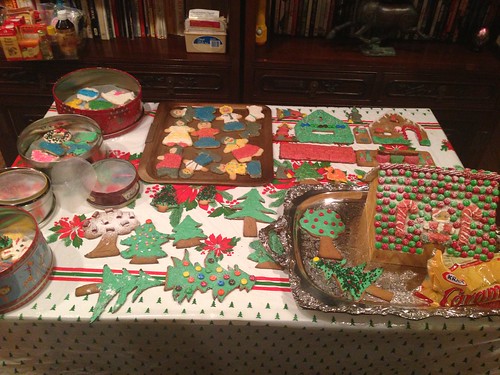 A little backstory. My Aunt Joanie makes the best sugar cookies in the entire universe. Not just the entire world. The universe. Like, The Doctor himself would agree that these are the best sugar cookies ever. And each year, she mails a tin of said cookies to my parents, and I greedily consume over half of them myself (and we all wonder why I have issues maintaining my weight over the holidays, hahahaha). My family has long tried to recreate what I *thought* was her epic cookie recipe, and year after year… we failed. So, last year after Christmas I finally, FINALLY wrote my Aunt Joanie asking her for the recipe, STRAIGHT FROM THE SOURCE. And a week or so later, what to my wondering eyes should appear? 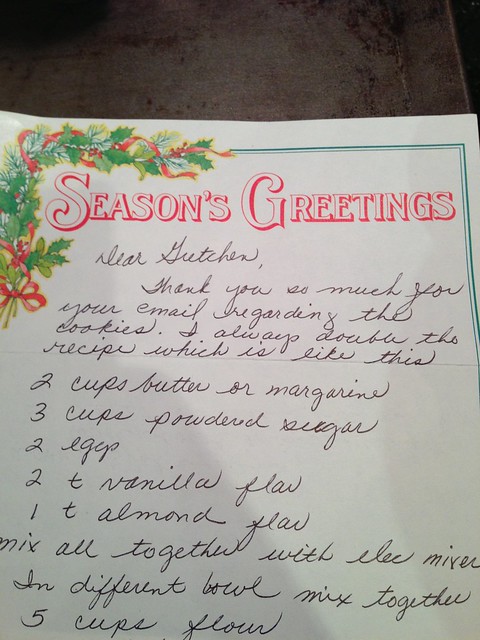 That’s right — the handwritten source of all deliciousness. So I’ve been delicately sitting on this treasure map to sugary goodness for the past year (and may or may not have had a sliiiiight freakout when I thought I lost it…) and yesterday, I headed over to my parents’ place and got down to work! 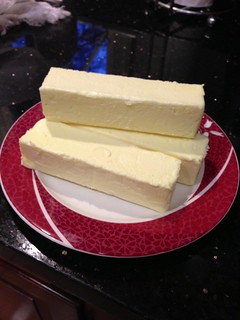 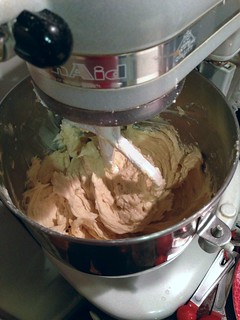 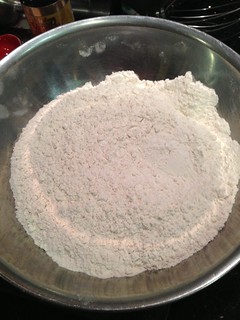 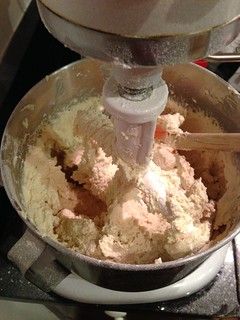 As you can see from the photos above, these are REAL sugar cookies. These aren’t dumbed-down, healthified-up, or any other such nonsense. These are I-hope-you-have-a-lot-of-people-coming-for-the-holidays-cause-otherwise-you’re-gonna-get-really-fat cookies. 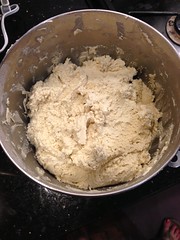 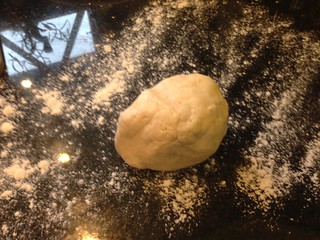 Now, I should preface this whole thing by saying that this was an incredibly harrowing cookie-baking experience for me. I was so dead-set on getting the cookies EXACTLY right, what with the amazing taste of Aunt Joanie’s cookies eternally emblazoned in my brain and tastebuds, that I kind of went a little crazy after the first couple of trays came out of the oven less than perfect. The taste was there but they were far too crisp and crunchy. Sugar cookie fail! Sure, it was all smiles at first… 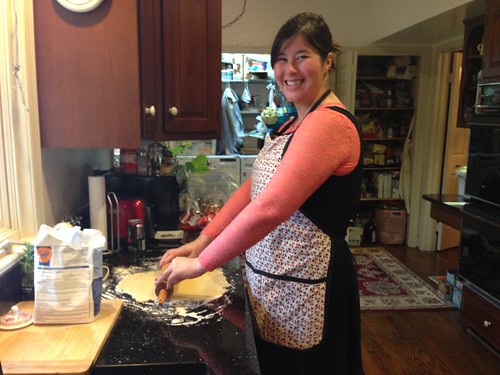 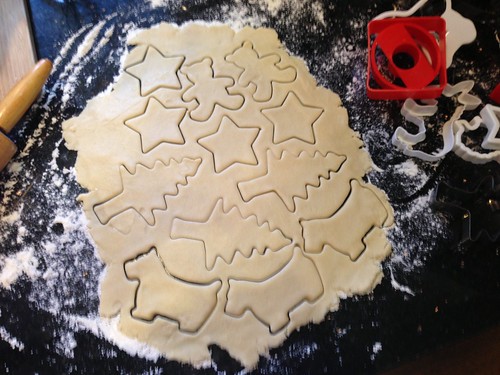 But seeing as how this was my helper: 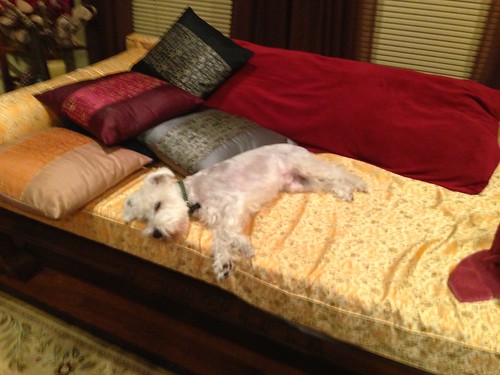 It wasn’t long before the entire process started to get to me. 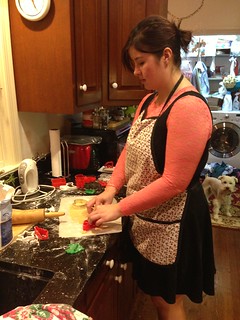 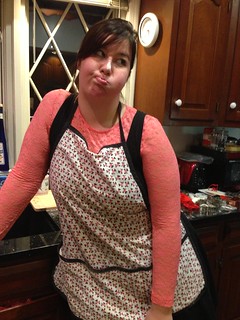 Luckily, I eventually worked out the tweaks and adjustments needed to accommodate for my mother’s super-hot oven and the fact that I was simply rolling the cookies too thin. And soon, I was pulling tray after tray of cookie perfection out of the oven! 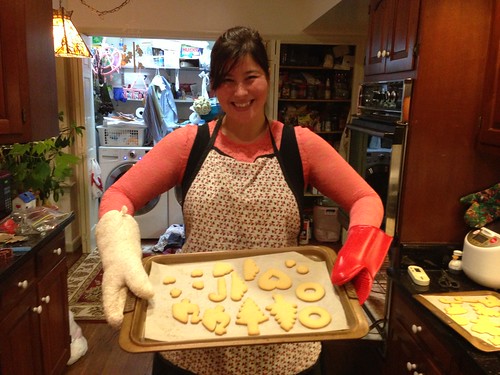 Huzzah! This means I was done, right? It was over? 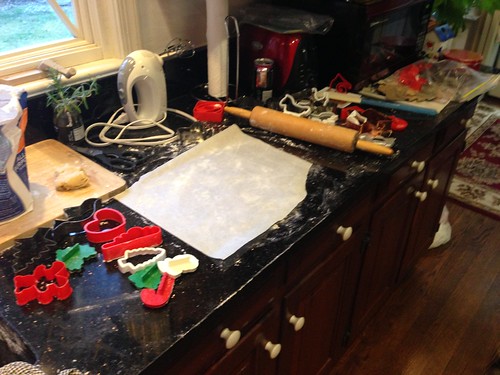 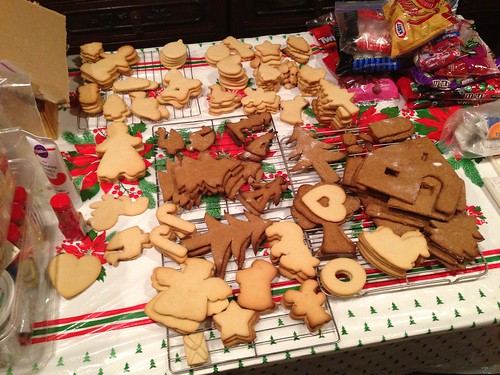 After an intermission where we were able to, like, eat dinner and stuff, it was time for Act II: decorating. My sister and father had already baked up the necessary pieces for our family’s traditional gingerbread house earlier that day, and those PLUS the plethora of naked sugar cookies I’d just created meant we definitely had our work cut out for us. 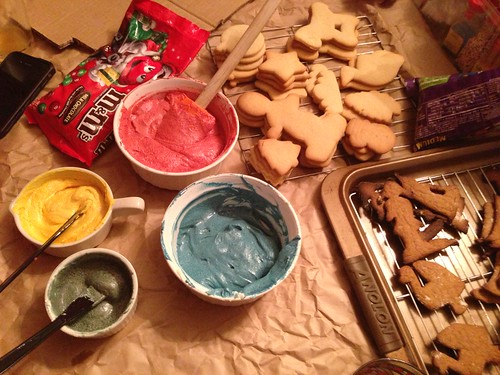 Luckily, I had more than a few willing helpers for this part. 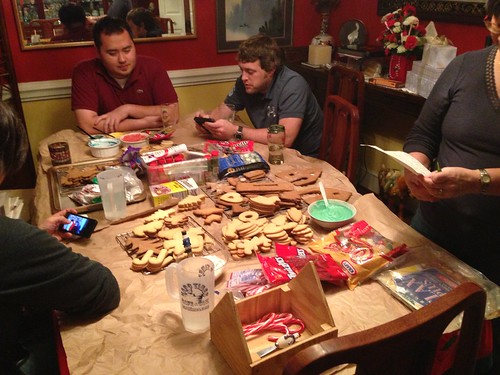 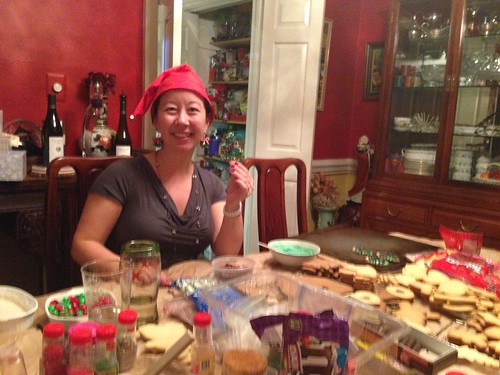 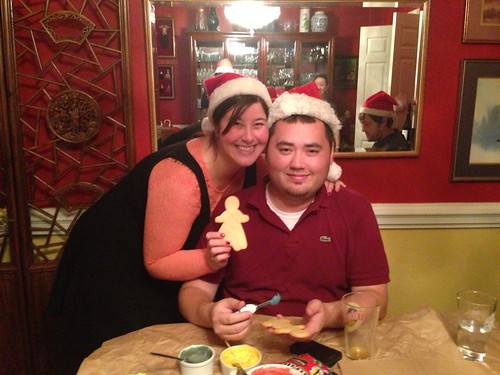 I was actually pretty amazed at my family’s ability to get through decorating the scores and scores of cookies we had. Sean was an AMAZING sport (and a surprisingly awesome cookie decorator. I was actually getting a little jealous of his skills, hahaha) and we ended up with tins full of delicious cookies, many of which rival the deliciousness of my Aunt Joanie’s (though, of course, I’ve simply come to realize that they really will never be quite as good.) And we all definitely made sure to continue the tradition of creating tiny cookie versions of ourselves (Jenny even made hers a pregnant profile version of herself, hahaha). For us to eat. Hmm. There may be something psychologically telling somewhere in there. 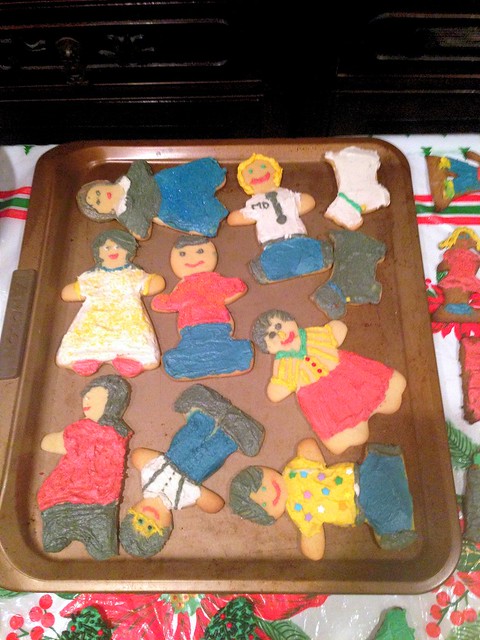 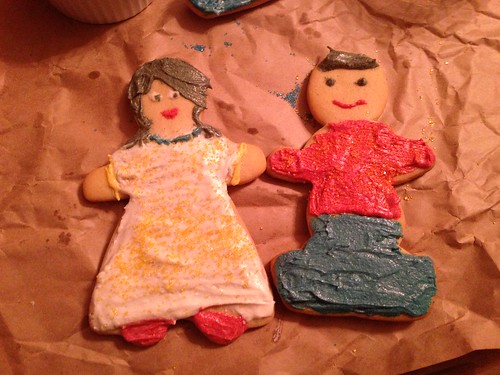 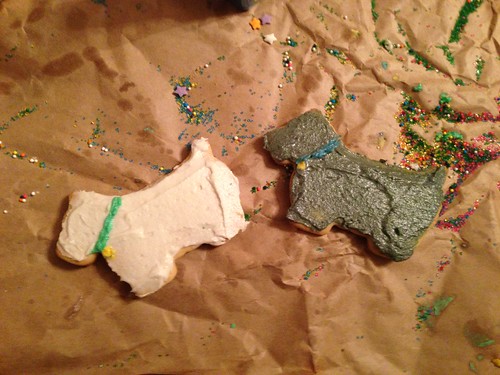 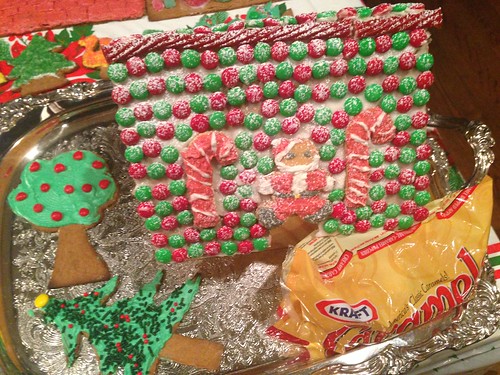 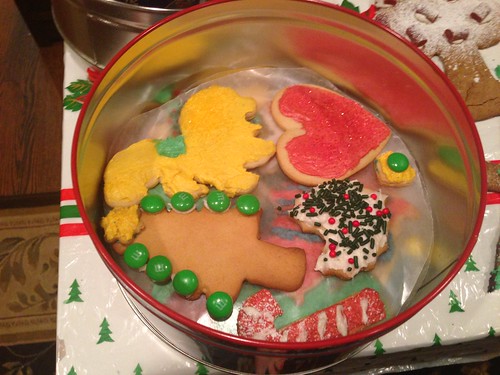 It’ll probably take another round of cookie-making at some point before I deem this recipe (and the subsequent tweaks I needed to make) suitable for sharing, since only the latter half of the cookies turned out really good. And, of course, some more taste-testing. Heheheheheheheh. Baking and decorating cookies and our family’s gingerbread house is absolutely my favorite family Christmas tradition. (Well, outside of the actual Christmas morning stuff. Cause, I mean, c’mon. Presents.)

I hope you are all having an absolutely amazing pre-Christmas weekend! Try not to get blown away — the wind has been CRAZY around here today!!

Leave a Reply to Lauren @ Oatmeal after Spinning Cancel reply