Boy, oh, boy. Where to begin with this one? Well, Sunday I ran the Cherry Blossom 5K and my feelings on it are… complicated. It started off as a huge cluster, unfortunately, but I still felt pretty good about it at the end. So, again, complicated. I felt the slightest bit weird about it in general, since I originally had signed up to run the 10 Miler but then dropped down to the 5K (smartest decision EVER, I should add!), but I still had my 10 Miler bib and everything. Still, I was excited to get another 5K under my belt (a distance that I’ve admitted many times to enjoying), and had plans to meet up with my sister and brother-in-law after they finished the 10 Miler.

The 10 Mile race had kicked off at 7 AM, while the 5K didn’t start until 8:40. I figured I had tons of time to get there, so I left for the Metro around 8 AM. Well, apparently I am fail at riding the metro, because even though the Smithsonian stop is only supposed to be 20 minutes away I didn’t get there until almost 9 o’clock! I hatehateHATE being late, so as soon as I got off the train, I started sprinting to try to find the 5K starting line. Unfortunately, it was blocked by the end of the 10 Miler course! Since I got there so late, there were a TON of fasssssst runners booking it towards their own finish line. I ran back to ask some race volunteers how to get across to the 5K start, and they told me that I did, in fact, have to cross the 10 Miler course… carefully. So I ended up having to wait another 4 to 5 minutes just to find a break in the stream of runners that I could sprint through (and felt like a total toolbag/douchecoaster doing so).

I tried to shake off my humiliation and continue towards the starting line… which had already been converted into the finish line. D’oh. I tried to peek at the clock to see what time I’d actually started at and I started my RunKeeper app to get some semblance of an idea of how I’ll do by the end. At this point, I was pretty disheartened. All of the stuff I love about racing — the crowds, the kick-off, the other people surrounding you — was gone. It was just me, a handful of other latecomers, and a steady stream of runners who are already heading for the finish. I had pretty much resigned myself to having a horrible race experience at this point. It was really difficult not to feel embarrassed as I trudged along by myself, despite all the encouraging words for volunteers and whatnot. I kept wanting to announce to them that I just started really late, that I wasn’t really in last place! Discouraged and already exhausted (after sprinting almost half a mile just to get through the starting gate), I ended up walking most of the first mile. Womp.

As it turned out, all was not lost, however. I did make a friend on the course, a fellow latecomer and 10 Miler drop-downer. After commiserating with her for a little while, I started to get a little bit of my spirit back. We started jogging again, and once we hit the turnaround point I was feeling much better. At this point, we began to pass the majority of the walkers, and as we ran back over the Memorial Bridge one of the volunteers yelled out “You caught up! I remember seeing you on the other side. How did you catch up so fast?!” which made me feel pretty good, haha. The second half of the race went by much faster, and was generally much more pleasant as we passed groups of people and the finish line came into view. I caught sight of Jenny and Dan (who had already finished their 10 Miles before I could even finish my 3.1, haha) near the end and started to really book it. I sprinted across the finish line and, though I don’t have an official read on my time, ended up finishing in ~38 minutes. Not a record by any means, but given my craptastic start and the fact that I walked in the beginning, I actually feel pretty good about. (I also feel I should remind myself that my very first 5K — which I didn’t walk at all during — took me over 40 minutes to complete.) 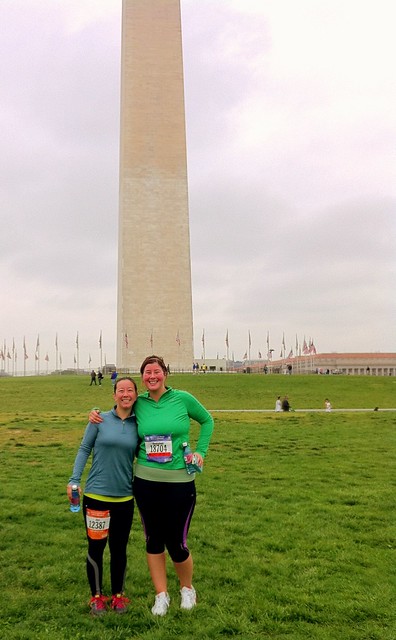 In the end, all’s well that ends well, and despite its less-than-stellar beginnings, the race did serve as a good reminder that the actual 3.1 mile distance is totally doable. With a little more dedicated outdoor training (since I’ve been doing almost 100% treadmill runs lately), I know I’ll be able to get back up to a 4 mile running stamina for the Reach the Beach Relay in May. 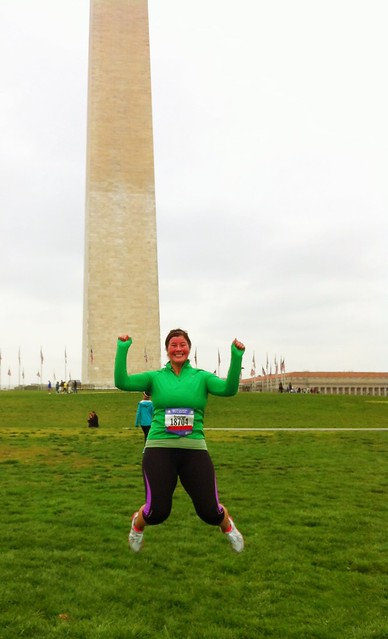 The last item on the agenda before Jenny, Dan, and I braved the smelly Metro back to Falls Church was to pick up the 10 Miler finisher medal that I had prematurely ordered, hahaha. Oops. At least you can’t argue about my INTENTIONS to have run that race, right? I bequeathed it to my very deserving sister instead. 🙂 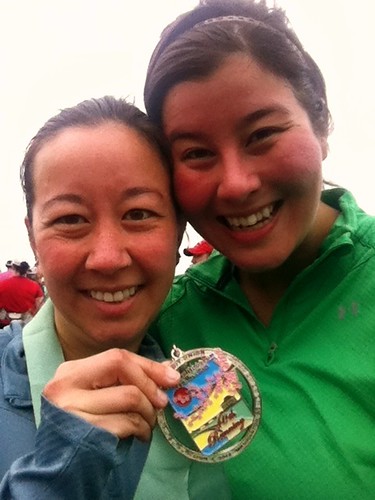 So the name of the game now is simply to continue training for the RTB Relay, go out with a bang there, and then never have to run ever again! Bahahaha. 😉