Happy Monday! The start of this week means that Relay Week has officially begun. Come Thursday, I’ll be flying up to Boston to meet up with my rad group of fellow bloggers that make up Team Off Balance for the Reach the Beach Relay! CRAZY!

This weekend ended up being particularly awesome. I didn’t, alas, get in my two-a-day run as I had originally intended (I did still RUN, however, just not twice in one day), but it was pretty great nonetheless. The real star of the weekend was the amazing blogger dinner that I got to attend thanks to my new best friends at Chobani! 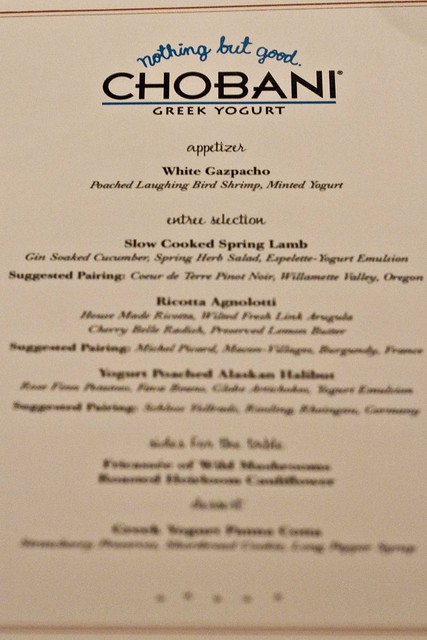 It just so happened that Claire was invited to attend this dinner as well, so the two of us set off from good ol’ Falls Church together. 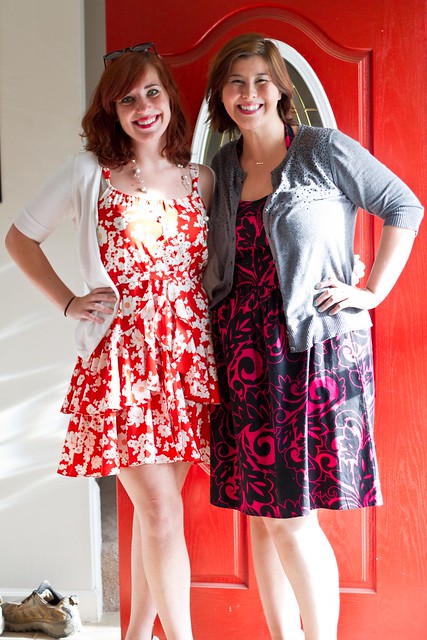 The dinner was in a private dining room at The Federalist, which is a really swanky little restaurant in DC. The menu was specially prepared by the restaurant’s chef to feature Chobani greek yogurt! As a self-proclaimed foodie, it was really fun for me to see what creative ways the chef came up with using yogurt for. 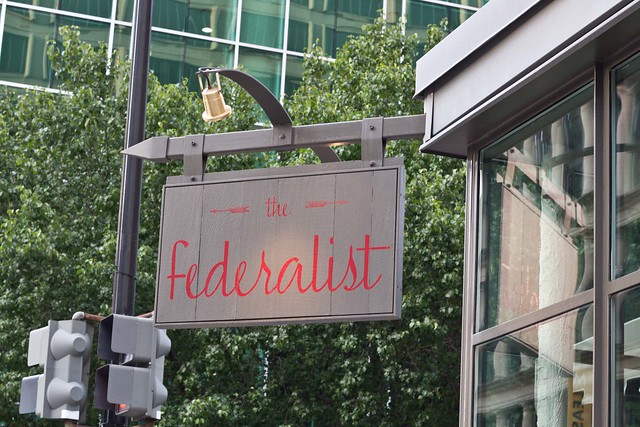 We pulled up to the restaurant and were immediately greeted by Jackie and Emily from Chobani, as well as a few other DC-area bloggers. Unfortunately, I didn’t get a group shot on my camera, but if I can get a hold of one from someone else, you might recognize a few familiar faces. Huzzah for real life and internet-life colliding! 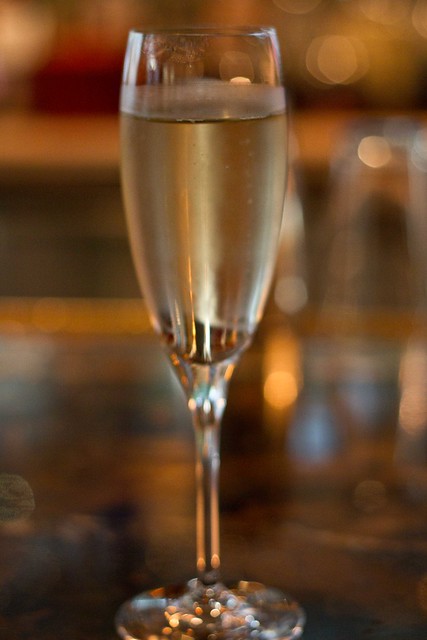 While we were waiting for the entire group to gather, I started off the night with a glass of my beloved prosecco. What can I say? I love my bubbles. 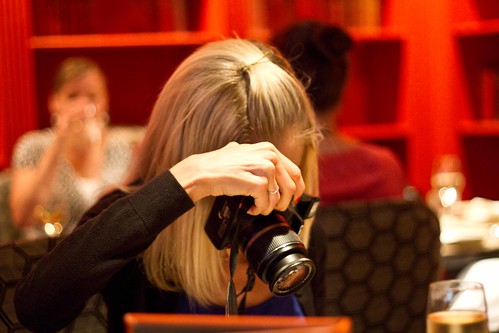 After we were seated, we all immediately began gushing over how nice it is to go to dinner with other bloggers, because you’re not the only one playing the role of food paparazzo, hahaha. It’s automatically understood that nobody touches the food until everyone has gotten their photos, haha! 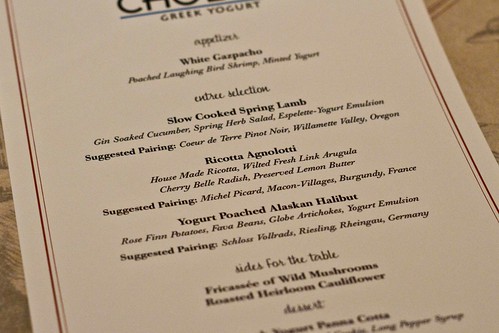 The menu, as I mentioned, was comprised of dishes that incorporated the use of Chobani greek yogurt. We all got the same starter and dessert, and had a choice between lamb, halibut, and pasta for our entree. 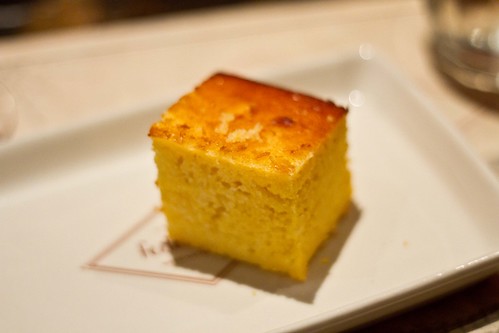 To start us off, they plopped down two bread baskets — one full of normal rolls, and one with cornbread. I think it’s pretty obvious which one I went for, hehe. It was moist and delicious! 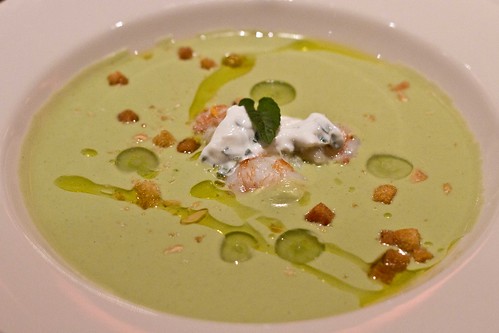 Shortly thereafter, we were given our starter: a white gazpacho (which I’ve never had before!) with shrimp, grapes, and minted yogurt. It was DELICIOUS. Super creamy (though the waiter said there was no cream in the actual soup — just cucumbers and almonds!) and very flavorful. I could easily have slurped down the whole thing, but I restrained myself because it was a big bowl and I knew we had two more courses to go. The soup was probably my favorite dish of the evening though, and I’m not very well-versed in cold soups so that should say something! 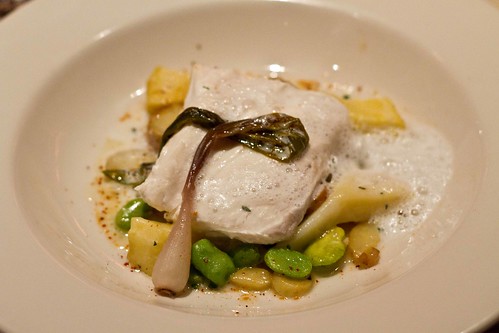 For my entree I chose the yogurt-poached halibut, which came with small roasted potatoes, artichoke hearts, and lima beans. I thought that all the side accouterments were yummy (which was bound to happen with all the butter that was used, hehe) but unfortunately the fish itself was a little lacking. I think it was mostly a textural thing for me. With a thick cut of fish like that, I was hoping for more of a sear or grill on one side at least, but it really just had the texture of being steamed (I realize the menu said “poached”, but I guess I skipped over that when reading, haha). It was pretty flavorful, so that’s definitely something, but I just didn’t find it to really stand out. 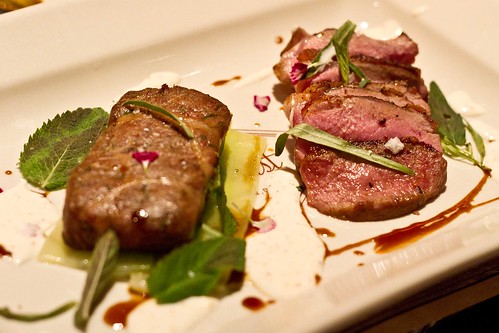 Now, lucky for me, Claire ordered the lamb and was nice enough to share a little of it with me. After my very first bite, I knew that this is what I should have ordered instead. They served it two-ways, sliced and then also a little loaf of shredded lamb mixed up with spices (including fresh dill!) and both were DIVINE. The yogurt sauce that came with it was also delicious, and it was nice to see lamb + yogurt done up in a non-Mediterranean way, since I think that’s what we all would have expected. 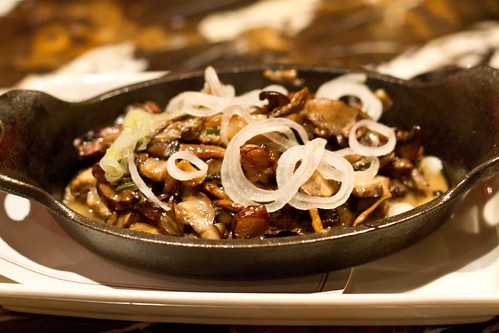 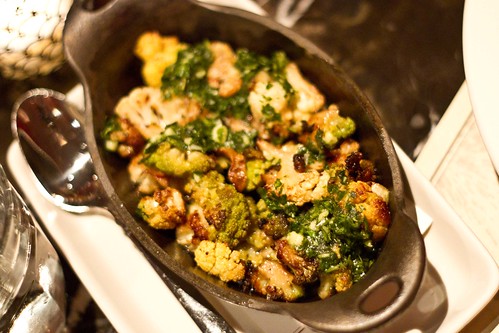 As side dishes for the entire table to share during our main course, we were given mushrooms and roasted cauliflower. Both Claire and I agreed that the mushrooms were definitely lackluster (not enough salt, perhaps?) but the cauliflower was outstanding. Some of it got really crispy during the roasting process, and it had tons of garlic on it. I may have to try to recreate some sort of garlic roasted cauliflower fish on my own now — I’ve never had any that good before! 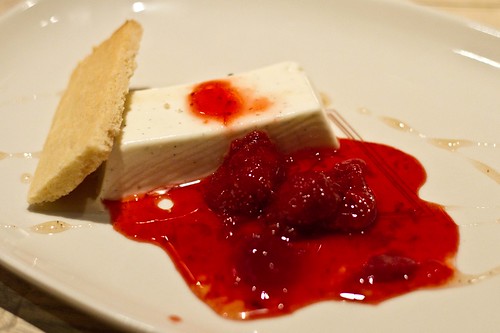 Finally, our last course was served. It was an incredibly, decadent-but-light-tasting panna cotta made with greek yogurt. Let’s just all say it together: NOM. It was served with a fresh strawberry sauce and a shortbread cookie (which I mostly left), and was absolutely heavenly. The texture was really impressive, I wish that the chef had come out to explain if they used cream as well, or if it was really just yogurt (plus the eggs and sugar, and all that other traditional custard stuff). Either way, it was pretty amazing. I completely demolished it, hehe.

So, as you can see, it was a pretty fantastic meal and dining experience. I really loved getting to hear Emily (from Chobani) talk about the company’s origins and founder. She is clearly really passionate about her job and the company, which always makes you fall just a little bit more in love with it. We even got little goodie bags at the end that included a water bottle, tote bag, and little recipe box! I’m not sure if I’ll actually have the patience to hand-write all my recipes onto the cards that came with it, but I do love the idea of having hand-written recipes to pass down to my eventual children’s children’s children, or what have you.

The only unfortunate note to the night was that shortly after we left the dinner, my stomach decided to start stabbing itself with a thousand sharp knives. I had eaten more dairy than I had in probably well over a month that night, and my stomach was NOT happy with me for it. I’m still not 100% used to having to tailor my eating for my lactose intolerance since it’s a relatively recent development, and most of the time I just “happen” to avoid dairy because of my preference for non-dairy milk anyway. (Can I just reiterate my joy that cheese somehow seems to be okay with my digestive system? HALLELUJAH!)

My stomach pains fortunately subsided by the time I got home, but it was kind of touch-and-go there for a while. Poor Claire had to deal with my moans and groans for the entire car ride home, haha. Oh well, all’s well that ends well, and I would do it again in a heartbeat. I’ll just try to remember to take a LactAid next time. 😉