So last night I made my (not so) triumphant return to CrossFit. I’ve been admittedly lax in my workout efforts since my car accident(s), citing my whiplash injuries as the reason I wasn’t trying very hard in that department. Well, while it’s true that I do still have some soft tissue injuries that I’m getting treatment for, I am certainly not completely debilitated. And shoulder/neck tension and discomfort considered, it’s no excuse for a total lack of exercise. So with a little bit of (necessary) prodding from my coach at CrossFit Annandale, I saddled up.

Please ignore the atrocious mess that is my room.

At least it gave me an excuse to try out some of the new CrossFit-targeted workout clothes that my awesome friends at New Balance sent me! 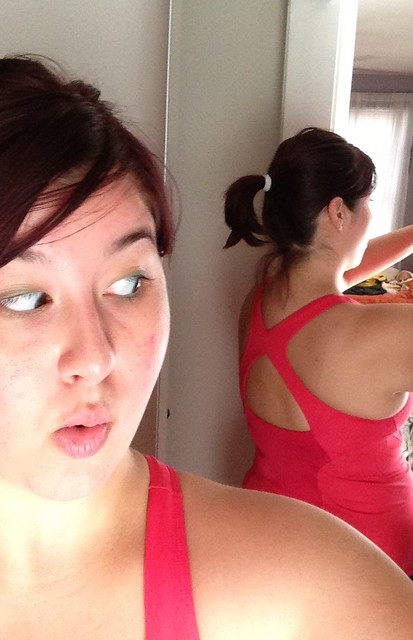 They hooked me up with a couple of Getback Racerback tanks. Not only is the back of this tank pretty flippin’ sweet, but the built-in shelf bra was surprisingly supportive. I didn’t wear any kind of additional sports bra with this tank and I felt totally fine jumping rope and whatnot at CrossFit. Kind of crazy, considering my rather ample front-end. I was definitely impressed!

They also sent me the Fitness 8-inch Shorts, which are seriously like the most unflattering length ever but are also CRAZY comfortable. And the length, while I don’t feel it does anything for my leg aesthetics, was pretty perfect for working out. No ride-ups, plus it has pockets! They’re also high-waisted, so I didn’t have to worry about my pooch or muffin top spilling over when I was squatting or anything. Hahaha, I am so attractive. 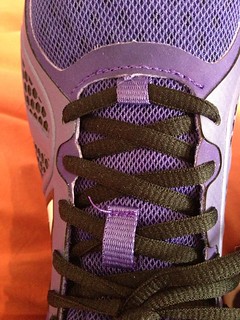 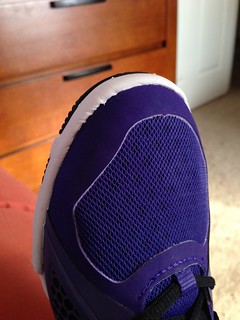 And, of course, what NB ensemble would be complete without shoes? They sent me a pair of their Minimus 20V2 Cross-Training shoes to try out. I am way in love with the color, and was blown away when I picked them up because they are SO light. Lighter even than the Reebok RealFlex shoes I received at the Healthy Living Summit.

In comparison to those Reeboks, however, the NB Minimus is also less flexible. Which I guess isn’t really a terribly important component of a CF shoe, but it is something that I guess I like. I was also just a smidge disappointed in the craftsmanship of the Minimus. They fit well and were great to use during CrossFit, but there were some manufacturing details that looked a little messy: puckering where the sole meets the upper, loose threads, and whatnot (as pictured above). Regardless, they are light on my feet, though I’ll definitely need to wear them more than, um, once, in order to give a full review on how they feel. 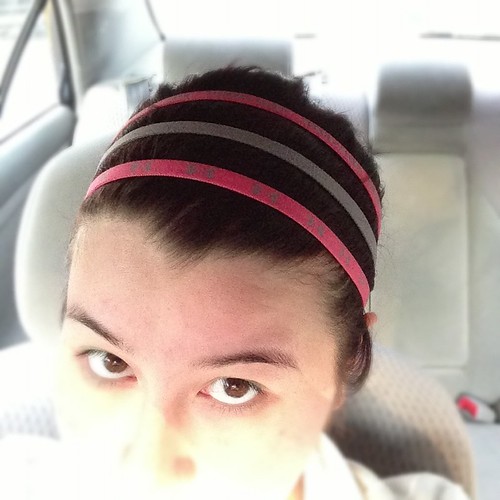 As for the one non-New Balance item I was wearing? My sister gave me this awesome Under Armour triple-band headband (she gave me two, actually), and I loveloveLOVE it. I provides the hair coverage of a thick headband without making me look like a thug or a seller of bavarian cookies. And even if the third band slips back because it’s too far back on my head (which I need to keep my bangs fully slicked back), the first two stay firmly in place.

But okay, enough product shilling, hahahaha. Onto the actual workout: 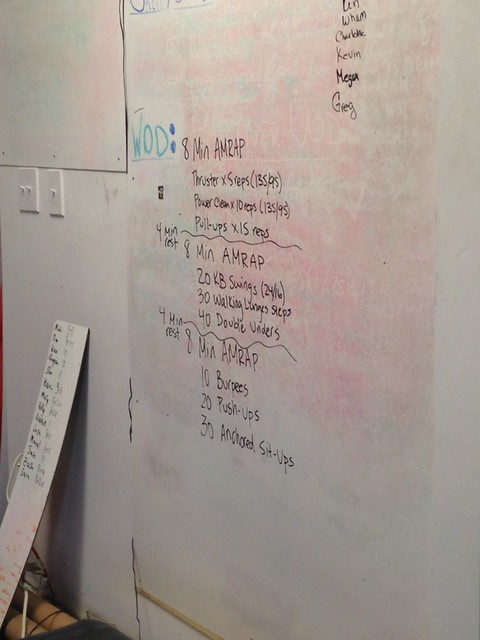 So evidently I made the poorest choice in the history of choices and returned to CrossFit on like the worst possible day. Because the WOD was RIDICULOUS. It was a three-part WOD, which I had looked up on the website previously and thought we had a CHOICE of the three 8-minute WODs: A, B, OR C. As it turns out, NOPE. I WAS WRONG. We did them ALL. IN A ROW (with a 4 minute rest in between each part).

I didn’t really end up doing the same workout as anybody else because the coach was super attentive to me and modified pretty much everything so that I wouldn’t strain my neck/shoulders. Basically, this meant turning everything into some variation of a squat. Ergo, jelly legs today. 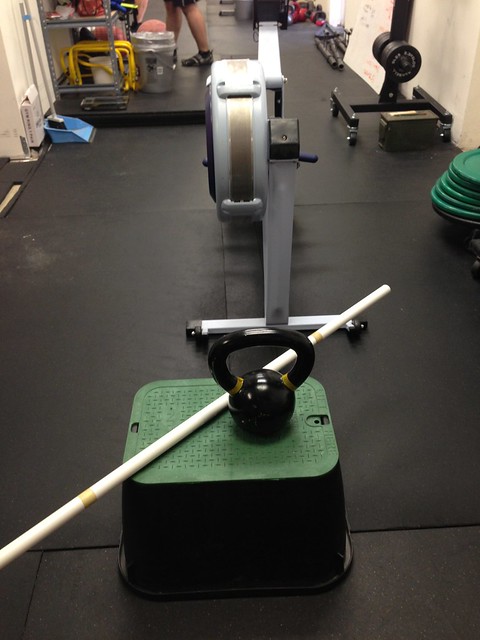 Here is how my workout broke down:

Part A: I used a PVC pipe instead of a barbell to mimic the movement of thrusters (5 reps), then did 10 goblet squats by holding a kettlebell upside down and squatting to replace the power cleans. Then I did 15 box dips instead of pull ups. I made it through 3 sets with two extra thrusters in 8 minutes.

Part B: Instead of kettlebell swings, I did another set of 10 goblet squats, which at this point were nearly impossible. My body has never felt so heavy. Then I did the 30 walking lunges that were prescribed in the WOD, and did 20 single unders (er, regular jump ropes?) instead of 40 double unders. I made it through 1 set, plus like 5 extra squats. I felt really lame.

Part C: Instead of burpees (my nemesis!), I rowed 150 meters. This was the part I was most excited about because it meant I didn’t have to do burpees, hahaha. Then instead of push-ups, I did box dips again (20 this time). And then instead of sit-ups, I held a 30-second plank. I was actually really proud of myself for being able to hold a plank for 30 seconds! I know it sounds CRAZY weak, but my max plank time from before was like, 12 seconds. I am not lying. Core strength has never been my (literal) strong suit. I made it through 2 sets and like, 2 extra squats. Again, felt very lame.

So, there you have it. I know that I’m not at my best right now, that I’m “injured” and “recovering” and stuff, AND that this was a particularly ridiculous workout for me to jump back into. But while I still got my butt handed to me by this workout (I’m thinking that post-CrossFit nausea is just going to be a thing I need to get used to, since evidently it’s going to happen every time, haha), I felt kind of pathetic that it did. Especially considering it was so modified. I know I shouldn’t beat myself up too badly (my lower body is hurting enough on its own today, haha), buuuut I may or may not have cried a little in the car once I left the gym. Only for like, 15 seconds though!

Ah well, once I have regained control of my quads and as my injuries continue to heal, I’m sure it’ll get easier. Or, you know, at least I’ll get used to being so bad at it.