Oh hai. So I’m on my way to St. Maarten with the fam right now (a well-earned vacation, I hopes?), but wanted to pick up where I left off with the Reach the Beach Relay recaps! (Here’s Part 1 if you missed it!) 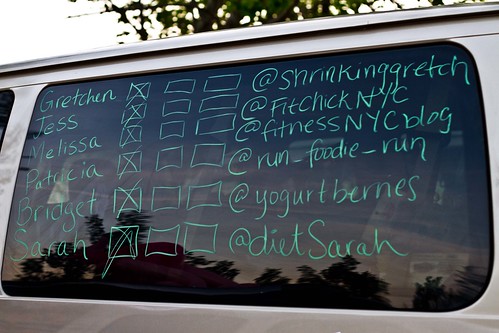 So, having left off last time just after I finished my first leg of the race (and THE first leg of the race, since I was runner #1!), let me give a quick overview of how this relay worked. There were 12 runners divided up into two vans, as you know. All six of our van’s runners ran, while the other van had downtime. Then, when our 6th runner (Sarah) was done, she handed off the baton to our 7th runner (Tina), who was the first runner of van two. Then we got a few hours of downtime while their van ran, until it was time to trade off and start all over again for leg 2! 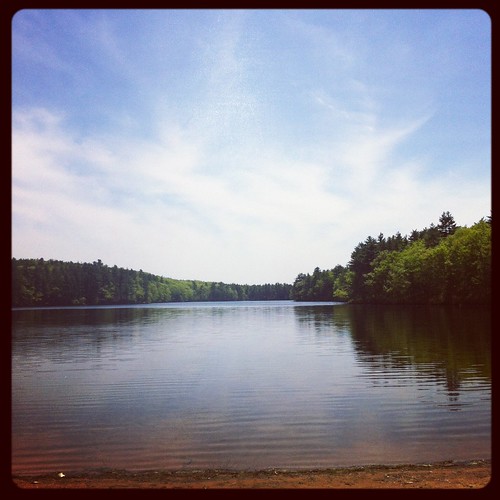 We really could not have been more lucky with the weather from this weekend, honestly. It was SO beautiful out — definitely hot, but breezy and gorgeous. Waiting at all the transition areas was so nice, and I was so grateful that we got to spend so much time outdoors. Unfortunately, I did get a little sunburned (face, chest, shoulders), but I’m just considering that as prep for St. Maarten, haha. 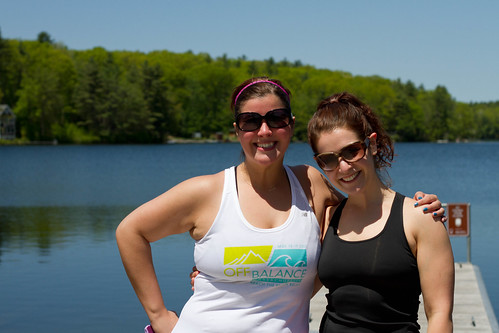 Bridget and me at a gorgeous lakeside transition area.

During our first long stretch of downtime (starting somwhere between 3 and 4 PM, I think?) we took the opportunity to grab some REAL food (aside from the multitude of snacks that were consumed in the van, haha). Our first attempt at food was a bust — two other RTB teams were already there and the place was too small to accommodate us all! We ended up at the Boynton Restaurant instead, which came highly recommended by one of our local Boston-based team members.

I got spaghetti and meatballs, which came with a little salad too. Sadly, at this point in the race I admit that I was getting pretty sloppy with picture taking. I didn’t bring my laptop to Boston with me, so I couldn’t offload my photos from my DSLR. With only a 4 gig memory card, I needed to be conservative! So sans photographic evidence, let’s fast forward to the second big transition area, where we waited for Van 2’s last runner (Ashley, the crazy sprinting machine who ROCKED all her finishes!) to hand the baton back off to me. 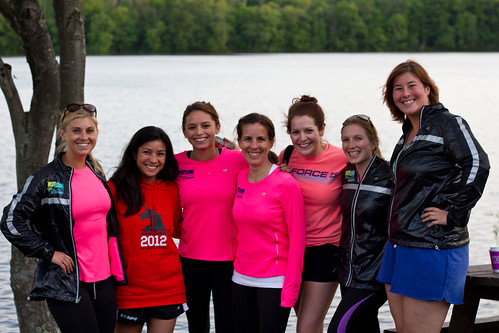 Van 1, with our epic and amazing driver Nicole (third from left)!

We spent a little bit of time chilling, rehydrating, and changing, but honestly, the time FLEW during our “off” time. Even though logically I knew we had 4+ hours, between dinner, stopping at the grocery store (I have never seen anymore more excited to go to a Wegman’s than Patricia, haha!), driving to the next transition area, and having to gear up for my next leg, I didn’t really feel like I got any time to just “be”. I did, however, make sure to snag the bug spray from Melissa. It didn’t stop the three giant mosquito bites that are decorating my legs right now, but I imagine that things would have been a lot worse if I hadn’t! 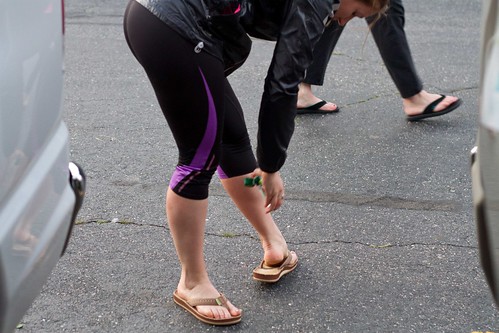 Beginning our second rotation through the running order marked the start of night legs for Van 1. This meant that not only would be running through the pitch black woods, but we had to put on some SWEET looking safety gear to do so as well. We had to have on a reflective safety vest, have a blinking light on the front and back of it, and wear a headlamp (or carry a flashlight). 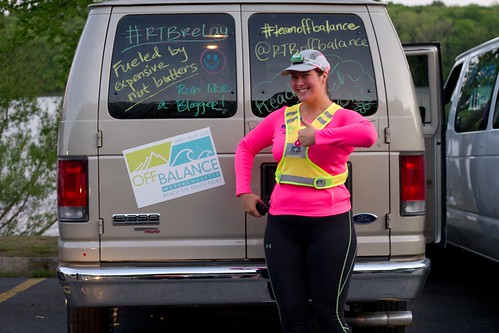 New Balance had sent us these awesome running hats a while back that have built-in LEDs in the visor, so that was super helpful. Apparently, the hat alone would have been enough to satisfy the headlamp requirement, although I didn’t know that. Still, I didn’t want to risk being mauled by a bear without seeing it coming first, so I strapped a headlamp on top of it. Elizabeth also got us all these amazing flashing rings to wear. Sexy, I know. 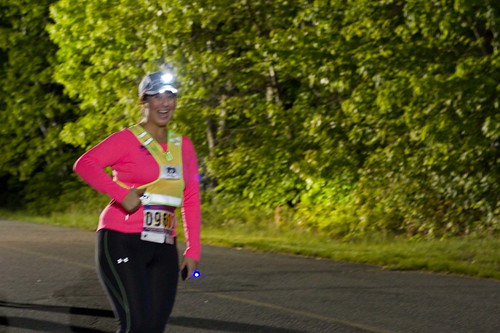 Ready and waiting at the transition!

My second leg was 4.78 miles through the darkness. A little before 9 PM, Ashley handed off the baton to me and off I went! 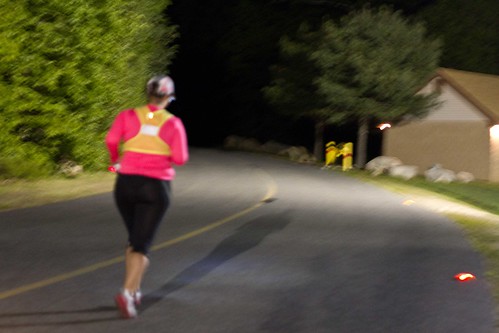 Despite this leg being almost twice as long as my first one, it was infinitely easier on me. It was still fairly hilly, unfortunately, but I found the solitude and quiet of running through the woods soothing. This part was literally PITCH black. There were no streetlights, only one or two houses, and a lot of forest. Even with both my lighted hat AND a headlamp, you could only see maybe 5 – 10 feet in front of you at any given time. It was a little scary, of course, to be out there essentially on your own, but I found it exhilarating. I did look over into the woods at one point and saw a the creepy reflection of a dog’s (at least, I hope it was a dog!) eyes peering out at me. That definitely motivated me to speed up, at least for a little while. Spooky!

I pounded through the first two miles at a steady pace, talking to myself like a crazy person to keep motivated. It worked! After I was about halfway done, I came out onto some main roads which were decidedly less fun to run along. The sides of the road were jacked up and pothole-y, and there were tons of cars. I was actually much more comfortable running on the deserted road with just the occasional car/van driving through, because I knew that they were A) going slowly and B) could really veer around me. On a normal two-way street, the cars were pretty uncomfortably close at some points.

I finally made it to the transition area after almost 5 miles in the dark, ready to hand it off to Jess. My team wasn’t quite expecting me yet (not sure if that’s a good thing or a bad thing? Haha!) so I got a few moments to catch my breath before the trade off. Leg 2 was done and done! I was 2/3rds of the way there, feeling EXHAUSTED but thrilled!

After all of our van’s second legs were done, it was about 1:45 AM. We drove straight to the next VTA to try and get some shuteye (“try” being the operative word). Even though we had been up for almost 20 hours and already ran two times, I had a really hard time getting any sleep. It was frickin’ freezing and not particularly comfortable. This may shock you to hear, but as it turns out I am a little bit too long to be able to sleep comfortably in a van, hahaha. My feet were crunched right up against the door. Oh, the curse of being 5’9″! I think I managed to eke out a solid 45 minutes of sleep (aaaaahahahahaha) before the anxiety over beginning my third (and final!) leg began.

And with that, I’ll leave you until tomorrow! Make sure you’re checking out the rest of my amazing team’s recaps, too. Each one tells a little bit of a different side of the overall, 31+ hour-long, 200-mile story!