Wellps, it’s here! As Sean can attest from the tear-stained evidence leftover from my completely hysterical breakdown about it last night, I’m off to the Reach the Beach Relay tomorrow! I fly up to Boston tomorrow morning, and it is going to be a packed weekend, full of more than just the relay race itself. It’s unlikely that I’ll get a ton of blogging in over the next few days. There will, however, be lots of Tweeting and Facebook updating though! We’ll be tagging race-related tweets with #rtbrelay, #newbalance, and/or #offbalance, and we even have a new Team Off Balance Twitter handle: @RTBOffBalance. Wheee, social media storm! 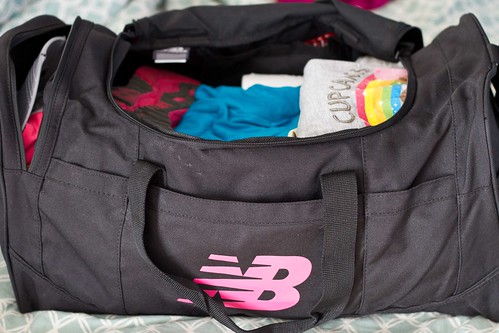 So a big component of preparing for a 30 hour, 200 mile race is making sure you’re packing well. I want to make sure that I’ve got everything I need without OVER-packing (something that I have a rather strong tendency to do). So I’ve been casually gathering things over the past week to make sure that I’m not forgetting anything. Yesterday I packed up most of the things I’m going to need (though I’m sure there will be a few last minute swaps and additions, for sure!) and gave my duffel bag a trial run. 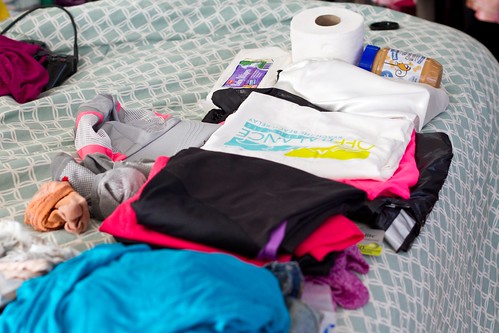 Since, as mentioned, our all-blogger team is being generously sponsored by New Balance, packing my fitness clothing isn’t much of a challenge. I’ve had a chance to test out all of the running gear that they sent us, and have my three running outfits all picked out. I have three sports bras, three pairs of socks, and three hair bands too. I’m even bringing the extra items that I won’t be running in — like these infamously short run shorts — because while I may not enjoy the chafing, they are super comfortable just to lounge around in. 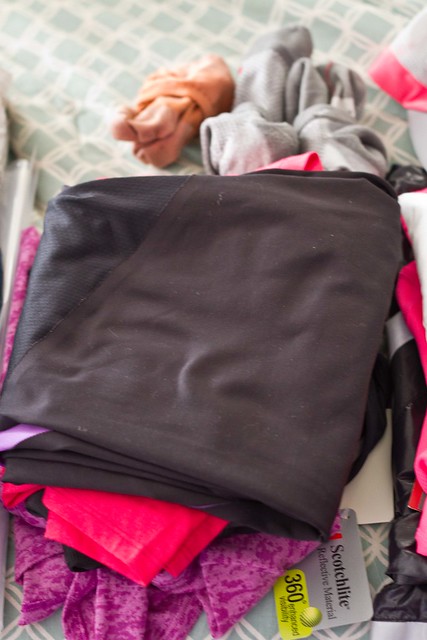 New Balance also sent us an awesome secondary package just a day or so ago with some team-branded clothing! So we have a tank, long sleeve technical tee, and running windbreaker all with Off Balance branding! So exciting, and the tank is not only vented with a sweet logo, but it’s super flattering too. Win-win! 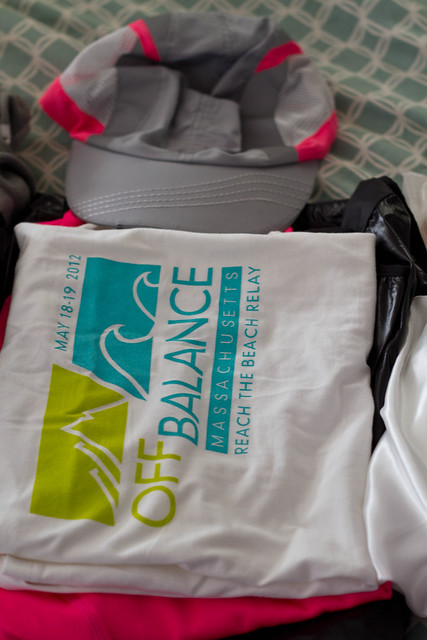 It was actually much more difficult for me to decide what to pack in terms of non-fitness clothing. Ultimately, I figured that things are going to be pretty casual (with the possibility of going to do something slightly nicer Saturday night if we’re not all dead), so I’m packing a couple of cute tees (including my Team Peeta shirt! RAWR!) and one sundress. I’m planning on wearing my jeans on the plane. 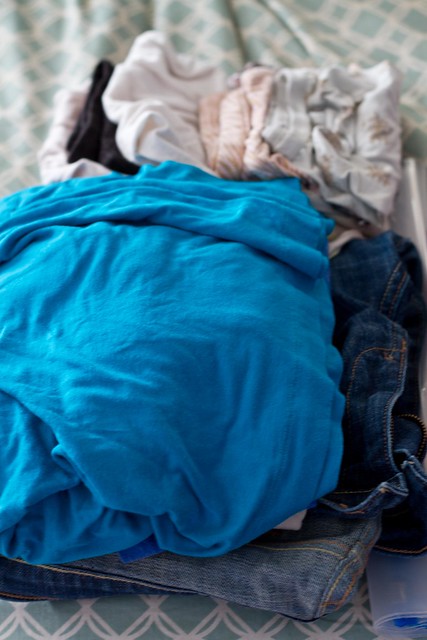 And yes, that is 7 pairs of underwear you’re seeing folded up in the background there. Underwear is the one thing that I believe can NEVER be over-packed! On the side you might also be able to make out a rolled up plastic-lookin’ thing. That’s three huge Ziplock bags for me to put my race outfits in. All of the relay race packing suggestions I’ve read say to pack your three race outfits in separate plastic bags — that way, it’s easy to pull them out when it’s time to change, and you also have a place to put them back when you’re done! I know it probably seems gross to put sweaty clothes in a plastic bag, but consider that I, the Sweatiest Exerciser Ever, am the first runner. That means that there are like 29.5 hours left in the race that my vanmates would have to put up with my stinky clothes if I didn’t seal ’em off, hahaha. What, TMI? 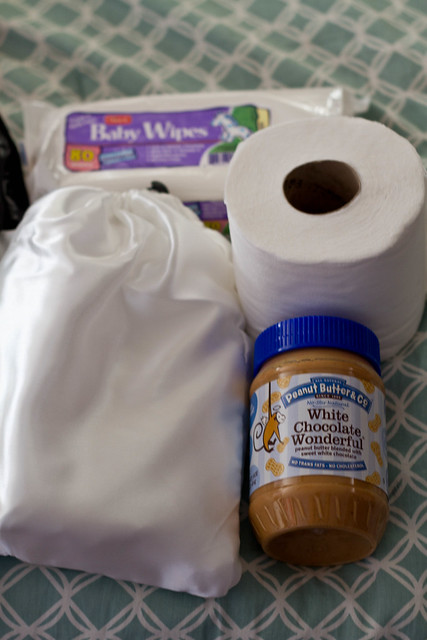 I do have just a FEW non-clothing things that I’m packing too. Since I’m flying and don’t want to have to check a bag, I’m trying to keep my extras limited. But I want to contribute to the team/my van, too! So I’m bringing baby wipes (for post-run wipe downs, since there won’t be any showers), a roll of TP (just in case!), the Dreamie travel blanket that Ben gave me for my birthday (if I decide to try to catch even a few minutes of shut-eye in the van, haha), and a jar of Peanut Butter & Co. White Chocolate Wonderful (for eating by the spoonful). 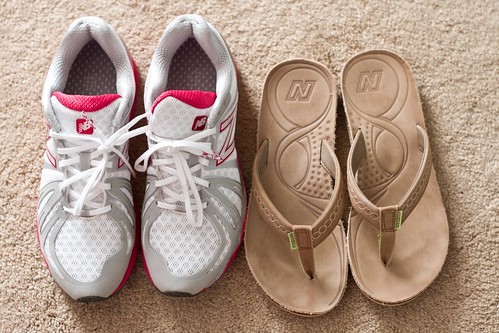 Of course, I can’t forget the most important thing that I’ll need to be bringing — my sneakers! New Balance also sent me this awesome pair of flip flops in my latest package, which I was counting on relaxing in between running legs. Unfortunately one of the support straps broke! I’m really bummed, because they are SO comfortable (they remind me of Rainbows!), but I guess I’ll have to resort to my UnderArmour flippies instead. Le sigh.

So there you have it! Additional things I’ll be bringing that aren’t shown include my camera (duh!), iPhone (duh!), charger (duh! Are you sending a pattern?), a hand towel (suggested by our New Balance contact to wipe down post-run), PJs for Thursday and Saturday nights so that hotel roomie isn’t subjected to THAT (bahaha!), toiletries (including men’s deodorant – this is no time for my usual Dove Cucumber and Green Tea!), and some very minimal makeup.

Any last minute suggestions for what to bring, what to do, or how to survive? General words of encouragement are also welcome, since I’m still mildly freaking out about the running part of this whole shebang… though, as my loving and rational boyfriend reminded me, I’ll only be spending a fraction of the relay (like, what, 2 hours total?) actually running. But still. Think good thoughts for me! 🙂