Happy Monday, friendos! I hope you all had wonderful weekends, the lot of you. Sean and I continued our 2-year anniversary celebration this past weekend, so it was pretty fab… though, as you can probably guess, involved a liiiiittle more foodstuffs than I probably should have indulged in. Thank goodness my weigh-ins are on Fridays now, eh? Hahaha.

Anyway, in the spirit of always being honest and transparent with you guys (plus the fact that I’m a weirdo and I love seeing what other people are eating), I figured I’d share a few snapshots of some of the things I’ve been eating recently. I promise it’s not all from dining out, too! I even have a couple of recipes to share with you guys this week, so there. 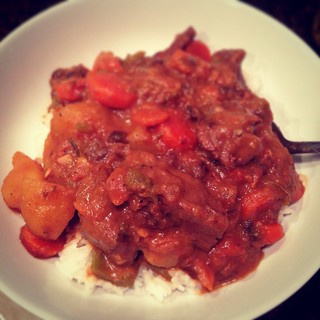 Whipped up a glorious batch of my (and Katniss’s) favorite Lamb Stew with Dried Plums — although evidently the Polar Vortex made it so that there was no good lamb at the grocery store, so I used beef instead. Still delicious! 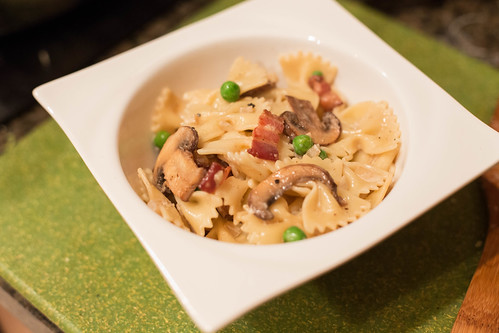 Played a game of pantry roulette and ended up creating a hot steaming bowl of deliciousness that included farfalle pasta, bacon, peas, and amazing mushrooms with a super light cream sauce just to bind it together. I know you all probably read the word “cream” and your collective buttcheeks all tightened, but I promise that it was still a very diet-appropriate dish. Recipe to come soon! 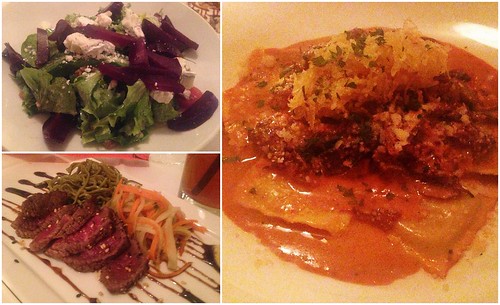 A iPhone pic collage of some of the amazingness that we experienced at Tuscarora Mill, where Sean took me for our anniversary dinnah. It’s in Leesburg and it is DEFINITELY worth the drive. You can peep my review on Yelp if you want deets about everything we ate (spoiler alert, it was a lot more than what is shown, hahaha), but that on the right there is a truffled goat cheese ravioli with mushrooms and pulled short ribs. I KNOW. I had never been so excited to eat leftovers the next day IN MY ENTIRE LIFE. 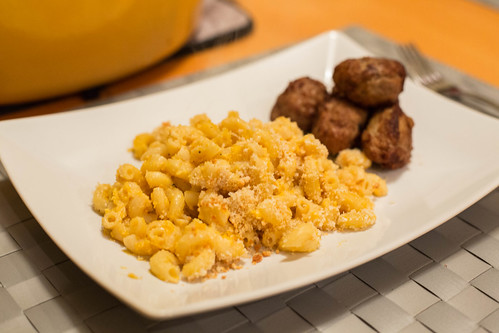 And, finally, last night my friend Reema came over and we whipped up a recipe from my homegirl Cassie’s AMAZING new cookbook: Beer & Butternut Squash Mac & Cheese. It really was just as delicious as it sounds, and even Sean got on board with the hidden butternut squash in the sauce. Mm-mmm, good. I’ll post more deets about the recipe (and Cassie’s cookbook!) soon!

So, lots of good eats (though in retrospect, I realize that there is a lot of pasta pictured. I promise I’ve been eating, like, vegetables and salads and stuff, too, hahahaha.) over the past few days, and even better ones to come!

So, in addition to all the deliciousness, time with friends, and anniversary celebration stuffs, I also had another fun addition to last week: I received my first Stitch Fix! Those of you who are already familiar with Stitch Fix are probably sick of hearing about it, and honestly, I kinda was too. But just before the holidays I had a chat with my friend Rachel about how much she was enjoying it, and I finally gave in and figured I’d give it a try. And when they hit it RIGHT OUTTA THE PARK with my very first box, I knew I had to share it with you all! 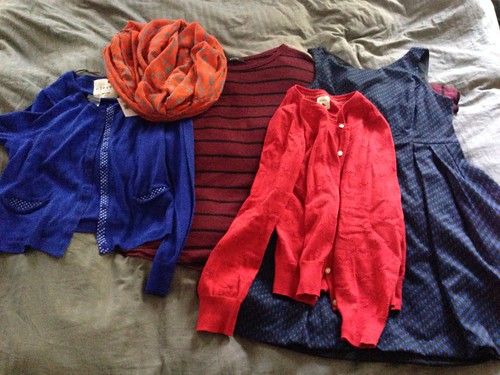 So, for the uninitiated, Stich Fix is like a mail-order personal shopping service. You set up a style profile and you can do one-time or monthly recurring “Fixes” (same price either way, $20, which is applied to the cost of the clothing if you end up wanting to keep anything) and they send you five items that they think you’d like! I was skeptical as to how personalized it would really be, but they let you link to things like your Twitter, your Pinterest fashion board (if you have one), and I even put my blog address in the extra field at the bottom. And when I received my box, and it came with a personal note explaining all of the items, AND it also pointed to my love of polka dots which they would only have known if they really HAD checked out my Twitter and blog and whatnot, I knew this was pretty legit. 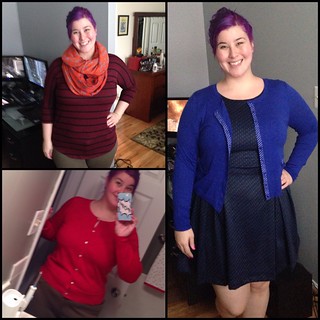 Of course, it helped that the totally knocked it out of the park! I received a dress, two cardigans, a shirt, and an infinity scarf. Every single item is absolutely my style, and has details that I looooove. The dress has a light polka dot pattern and has that vintage-ish silhouette that I love, the blue cardi has polka dot detailing on the pockets and down the button closure area, the red cardigan has a light butterfly cut-out print and AWESOME buttons — each button is different! — and the infinity scarf is a bright, fun orange and THEY PUT A BIRD ON IT. Many birds, in fact.

The striped shirt was the only item where, before trying it on, I was kind of meh about, but once I did put it on, I LOVED it. It’s actually really flattering, incredibly soft, and super comfortable. Horizontal stripes! Who knew?!

I ended up feeling the most iffy about the red cardigan after trying everything on, just because from a distance there was nothing too special about it. But because Stitch Fix offers a 25% discount if you end up purchasing all five items, it was essentially free — the cardigan cost less than the amount I ended up saving from the discount! Plus, it ended up being way cute when styled with the dress instead of on its own — I ended up wearing the combo to Tuscarora Mill for our anniversary dinner! 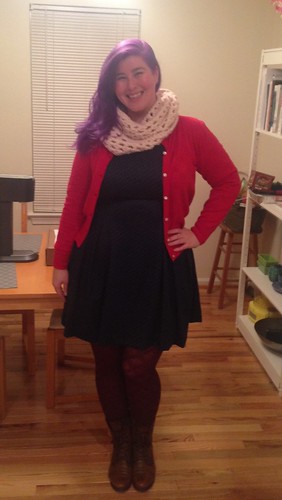 Speaking of pricing, you can set your price points for all the various categories of stuff they offer. So in that way, you can totally emphasize the clothing items that are most important to you. For example, for jewelry and accessories, which I don’t particularly care about, I put “As cheap as possible,” but for dresses and outerwear, I said I was comfortable with paying over $100 for those. Now, it just happened that every single item in my first box was between 28 and 48 dollars (yes, even the dress! I ended up paying just over $100 for all five items with the discount and the $20 styling fee I already paid going towards the total), so this was like a double-win in that arena.

ANYWAY. Enough talk about Stitch Fix and my latest obsession. I promise that this is not a paid promotion or a sponsored post or anything like that — they’re not paying me to say these things! (Though, as a disclaimer, the “Stitch Fix” hyperlink above is my referral link for the site.) I was just REALLY impressed with this service, especially because I was admittedly worried that I was too big to fit anything they offer. Which, now that I bring that up, is probably the only real problem with it, because the biggest size they offer on their style profile is 14… and, let’s be honest, that is deeeefinitely pushing it for me right now. So it bodes well for my continued weight loss efforts, but it was kind of a crapshoot whether I’d be able to fit everything they sent this time around. Thankfully it did all fit… but still. Broaden your sizing horizons and you will be utterly perfect, Stitch Fix!

OKAY. Sorry, sorry, enough chatter for now. Hope you’re all having utterly tolerable Mondays, and I’ll see you on the flip side!