Oh, I’m sorry. Did you think that the totally age-inappropriate obsession that I have with Harry Potter was over and done with? Ha! Part 1 and Part 2 of my Harry Potter World recap may have come and gone, but we’ve still got Sunday to cover. In fact, Saturday’s recap wasn’t even 100% complete — I left out one extremely important piece! Well, fear not, friends. I’m about to rectify that. In fact, I should tell you right now that it’s about to get EVEN nerdier in here (you didn’t think that was possible, did you?). Don’t say I didn’t warn you. 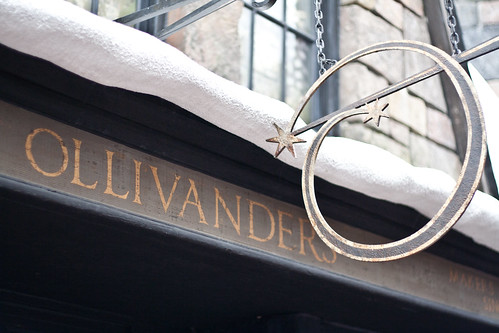 I mentioned in yesterday’s post that Ollivander’s wand shop isn’t really a shop at all. In fact, it’s more like a show. You stand in a line (where the attendant is repeatedly telling people that this is not a line for a ride, so please don’t get in thinking you’re about to get on Dragon Challenge, haha), and eventually you’ll be ushered in with a group of 15 – 20 other people into the shop. 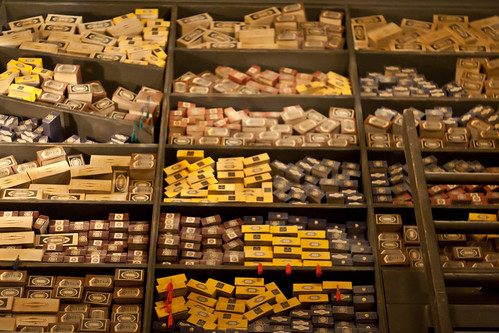 It’s cool and quiet inside, and just there, behind the counter, is the actor playing Mr. Ollivander himself. Thus, the show begins: 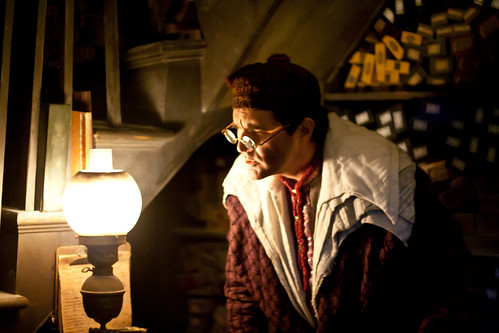 He motions to a girl dressed in school robes, standing in the front. She’s probably about 13-years-old. “You there, Gryffindor! Step forward,” he calls. She tentatively goes up to the counter, where he proceeds to inspect, measure, and generally observe her. He then offers her a wand to test out. He instructs her to use the Wingardium Leviosa spell on a box of wands resting on a shelf to the side. The shelves break and fall down. Not the wand for her! He casts a quick Reparo, then pulls a different wand for her to try. 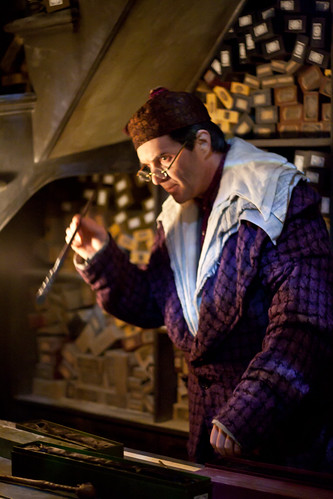 The second wand causes a thunderstorm in the shop. Strike 2. As you might predict, it’s the third and final wand that’s juuuuust right: the music swells, the room glows, and finally a wand has chosen her. We are then dismissed into Dervish & Banges next door to purchase wands of our own (and I imagine that her parents now have to foot the bill for her wand as well, haha). Now, I knew going into things that I had about a 0.01% chance of being chosen by Ollivander for the show, especially if there were kids in my group. But somehow he must have sensed that I was a true fan (perhaps the squealing and clapping I did when we first walked in? Or maybe the incessant click-click-click of my camera throughout the entire presentation?) because before my parents and I had a chance to exit, he came up to me.

“You there,” he said. I responded with a look of shock and what must have been a truly dumbfounded grin plastered on my face. “What house are you?” he asked.

I struggled to use my words like an actual human being for a second, before stammering out, “I… haven’t been sorted yet.”

“Hmm,” he said, looking at me quizzically. “I sense a great wisdom in you. Surely one as wise as you must be Ravenclaw!”

“I certainly wouldn’t mind that!” I said, even though I’m about 90% sure that if I were to actually be sorted, I would be a Hufflepuff. Womp womp.

“I just the wand for someone with your great mind. Ask my assistant inside the shop for the hazel wand. Yes… Hazel, 11 1/2 inches, with a core of dragon heartstring. Surprisingly powerful for its size, and well-suited for wisdom such as yours.” He gives me one last appraising look before walking away, and I stumble out of the shop in a stupor. 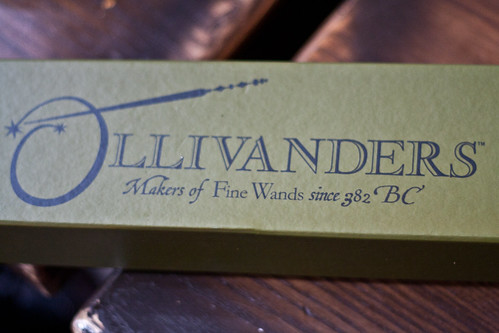 After a few minutes of TOTALLY geeking out because holy crap, that was completely awesome, and was the next best thing to being chosen for the show itself, I go right up to one of the shop assistants and ask for the hazel wand. 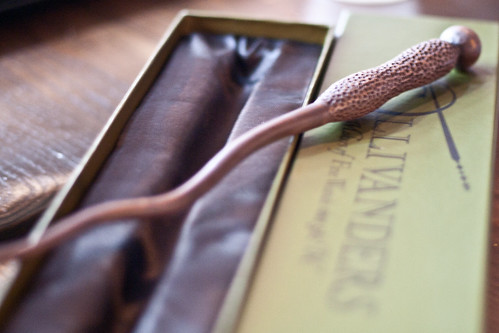 I purchase it (all wands are $29.95, for your reference) and proceed to make a fool of myself for the next twenty minutes, swishing and flicking it around like the fool I am while we had our butterbeers in the Three Broomsticks. 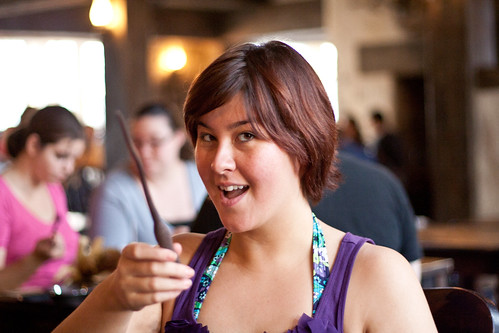 Well, I did give it over to my mom so that she could have a little mischief too. 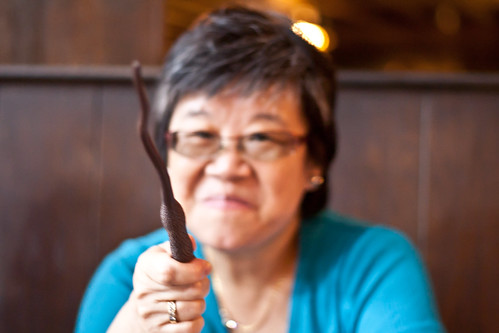 I solemnly swear I am up to no good.
And that, my friends, is hands-down the most amazing part of my Saturday. 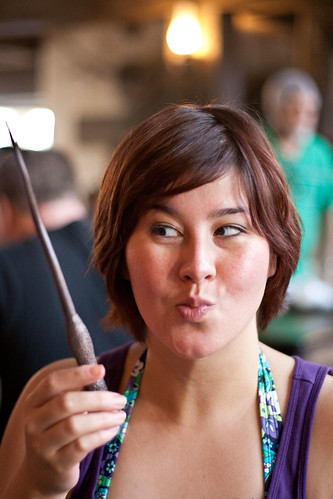 Now, if you’re still able to hang on with me, we can flash forward to Sunday and get the rest of this beast done. Sunday, my mom stayed back at the hotel and my dad and I made good on our intention to actually see the non-Harry Potter parts of the park, haha. We started off in Marvel world, where I was exceedingly grateful that I hopped on the Hulk coaster right before leaving the night before, while the wait time was low. Still one of the best roller coasters I have EVER been on! We then worked our way through the Toon Lagoon (stopping to get thoroughly soaked on the Popeye water ride, hehe), although we didn’t go on any other water rides since there was a little bit of on-and-off rain and potential thunderstorms that threatened to shut them down. We did stop for a little while in the Jurassic Park Discovery Center (always so much fun for me, despite the PTSD that movie gave me, haha) and eventually made our way back around to Hogsmeade. 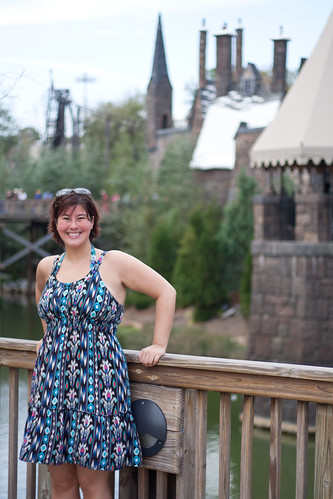 Here, we got in line for the Flight of the Hippogriff ride (the wait was about 45 minutes – I definitely noticed a significant drop in sheer volume of people at the park from Saturday to Sunday, even though it was a holiday weekend!) and is themed like a Care of Magical Creatures class taught by Hagrid. 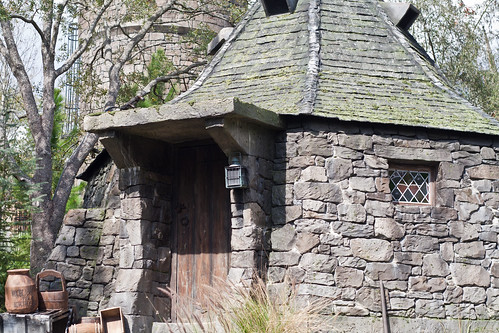 Since this is more of a kid’s roller coaster (no loop-de-loops or anything fancy), my dad was happy to accompany me on this one (Hulk coaster — not so much, haha). The ride itself is only, what, 45-seconds long? But it was fun, of course, and you get to bow to a mechanical Buckbeak as it starts, which I loved. 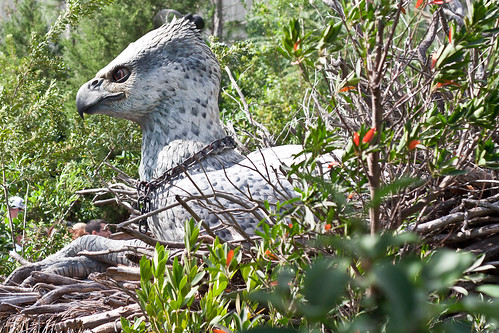 After the ride, we revisited the Three Broomsticks to fuel up with another butterbeer (this time in souvenir mugs, OF COURSE) before braving the various shops. They were just as delicious the second time around, and doubly as fun in plastic flagons, haha. 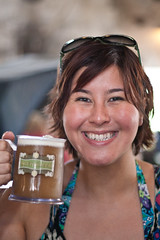 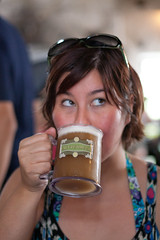 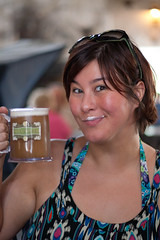 Riding on my frozen butterbeer-induced sugar rush, I then proceeded to spend all my money on ridiculous memorabilia. So. Frackin’. Worth it. 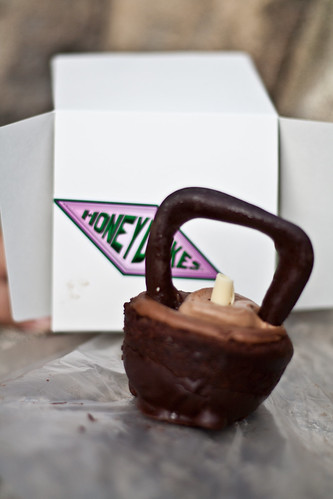 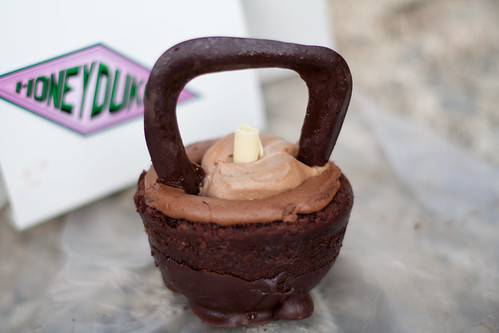 The most immediate thing I walked away with was a cauldron cake from Honeydukes that didn’t even make it out of the park. My dad and I devoured this little mousse-filled chocolate cupcake with relish — I can’t wait to try to recreate them! I also forced him to take pictures of me with my new pet Pygmy Puff. 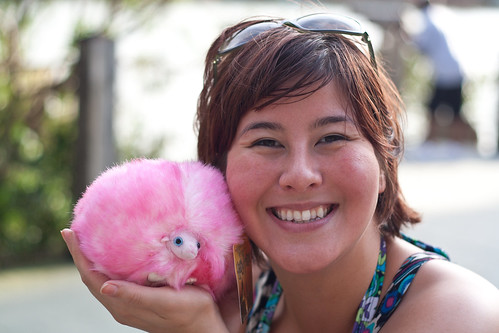 His name is Stanley. 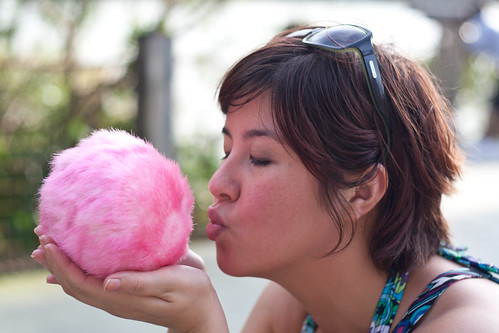 And that pretty much marked the end of our theme park adventures! We made it back to the hotel in time to grab a late dinner with my mom (SUSHI!) and prepared ourselves for the trip back. I had to get a little bit creative with the packing since, in addition to my own souvenirs, I was also transporting wands back to Ben & Taylor. Aside from the wand, butterbeer mug, and Stanley, the rest of my own spoils included… 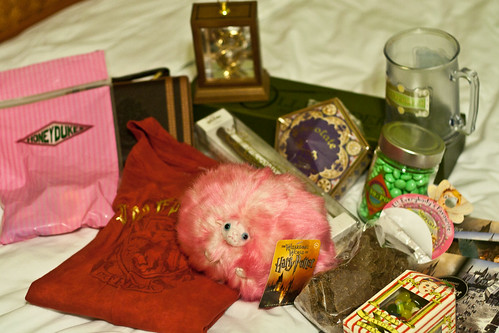 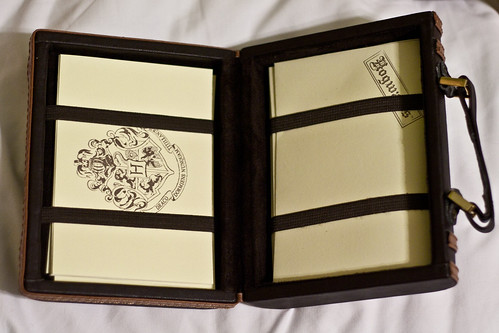 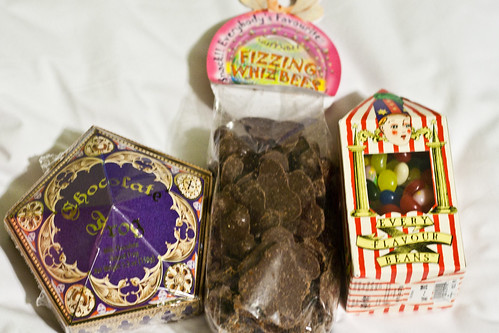 … a chocolate frog, a package of Fizzing Whizbees (which I got to eat half of before Daxter dug them out of my suitcase and ate them… which led to an entirely new level of freakout given his health history… but I digress!), and a box of Bernie Bott’s Every Flavour Beans. And then there’s the piece de resistance of my new Harry Potter-inspired collection: 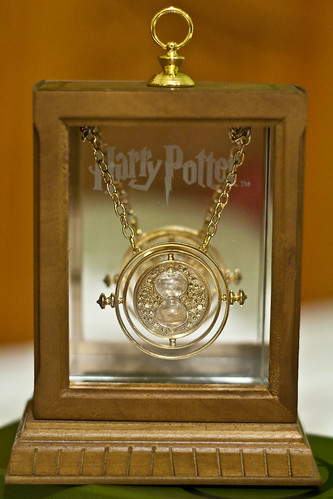 A Timeturner of my very own. Suck on that, Hermione. Yes, I know it’s a lot. I deposited quite a few Galleons into Universal’s pockets this weekend. I would like to point out, however, that when I made a joke about how much money I was spending on what is essentially just CANDY to the guy at the register in Honeydukes, he said that I shouldn’t feel bad because he has literally rung up thousands of dollars worth of merchandise for just one person before. So, really, I think you should all be impressed with my restraint. 😉

So. There you have it. How do I even sum up what really was the trip of a lifetime for me? Aw, to hell with it. I am just going to embrace the cheesy sap that I am, and say that it really was magical. I don’t expect all (heck, any!) of you to understand it, but it was just amazing for me. It was the culmination of my childhood (I was more or less the same age as the characters in the books as each one came out, so I literally grew up with Harry Potter) come to life. I loved every minute of it, and I simply cannot WAIT to go back.