Happy Monday, friends! I know there may be some of you anxiously awaiting the announcement of the Pure Protein prize pack giveaway, but you’ll just have to hold on a liiiiiiitle bit longer — sorry! First up, I want to tell you about part of the awesome weekend I had! Actually, the entire weekend was pretty stellar, but I’m just going to tell you about Friday today. Yep, that’s how good it was — it deserves its very own post. 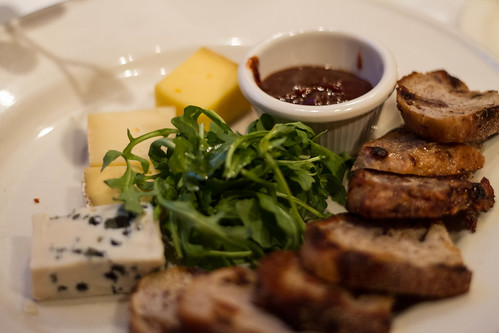 So the evening kicked off when I met my friend Rachel for dinner in Georgetown. We met up at Clyde’s, and shared a cheese plate. Obviously, this means that things started out well. 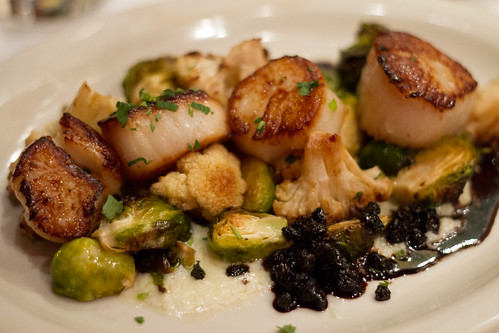 For my entree I got a sea scallops dish with roasted brussels sprouts, cauliflowers, and some kind of raisin/current sauce. It. was. awesome. I’ve only been to the Clyde’s in Tysons Corner before, and it was fine, but I can definitely say I enjoyed both the service and the food a TON at the Georgetown location. But! Dinner wasn’t the main event of the night. In fact, it was merely a precursor to… 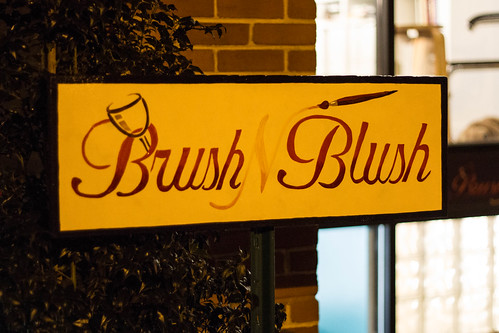 A boozy painting class! Okay, so I know that it probably sounds lame that I am so excited over a painting class, but I have wanted to do one of these things for FOREVER, and I am just soooo glad I finally did. It definitely lived up to my expectations. Which, okay, to be fair, were to A) paint and B) drink wine, both of which I did so… not that hard to meet. BUT IT WAS STILL SO MUCH FUN! 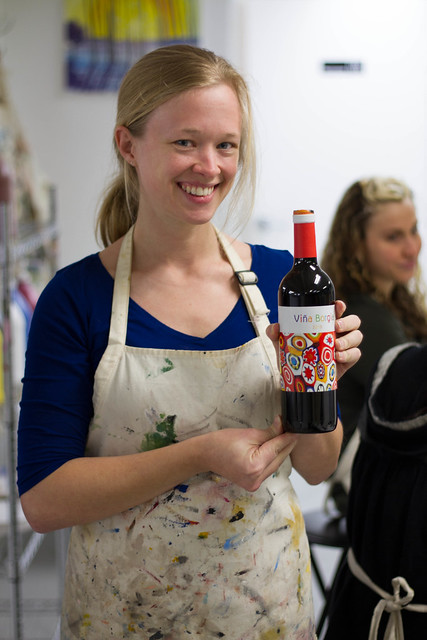 Rachel and I went to Blush ‘N’ Brush in Georgetown, which was a little studio tucked off of Wisconsin Avenue. For those of you who may not be familiar, the way these painting classes work is that you are mimicking another painting, and you’re allowed to drink (yay!). You can bring your own wine, of course, but they also sell wine there, so we just purchased a bottle. 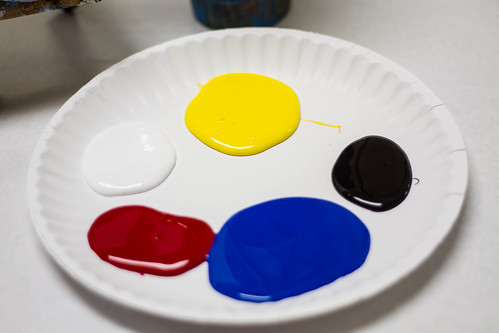 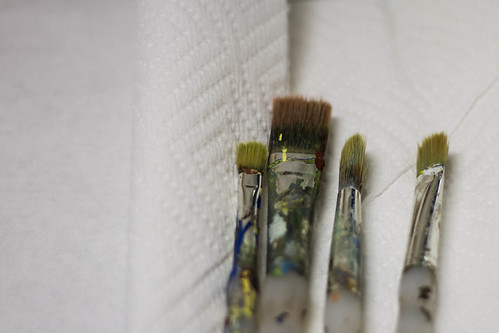 They had blanke easels set up for everyone in a long time facing towards the front, so you could see both the instructor, who showed you what to do throughout the whole process, as well as the finished painting we were copying. 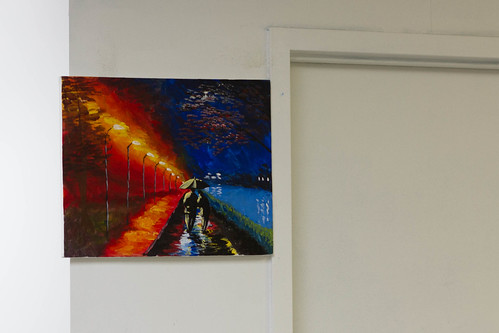 This is the painting we were all aiming towards replicating. Blush ‘N’ Brush posts what painting each class will be doing on their calendar online, so you can actually specifically choose your class based on what painting you’d like to do! Pretty neat. Rachel and I had actually originally planned to do this a couple weeks ago, but then I got the flu, so we had to reschedule. Because of that, I wasn’t actually sure what the painting was going to be until we got there! I got a little nervous when I saw that there were people in the painting (anything realistic is a novice artist’s nemisis, hahaha) but it ended up working out okay, I think. Well, I guess I’ll let you guys be the judge, hehe. 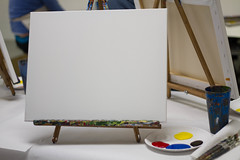 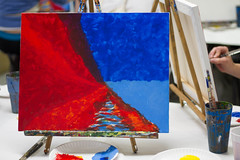 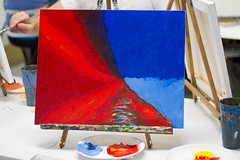 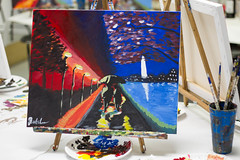 Ta-da! The class was a little over 2-hours long, but the time honestly FLEW. Maybe it’s because I just had so much fun with it (I used to LOVE to paint and do art when I was younger, even though I’ve never had much talent for it) but really, I was so surprised how after we finished up the background the instructor told us we’d already been painting for an hour. 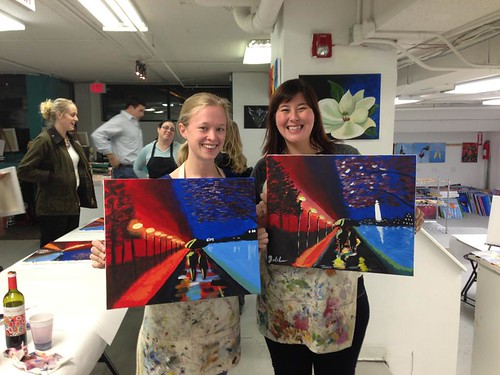 The instructor gave us the option to add in a little Washington (or whatever city you wanted, I guess) monument in the background, and I kind of messed mine up and made it super ginormous and fat, but thaaaat’s okay. I mean, you know, it’s just like… city pride… or something? Hahahahaha. 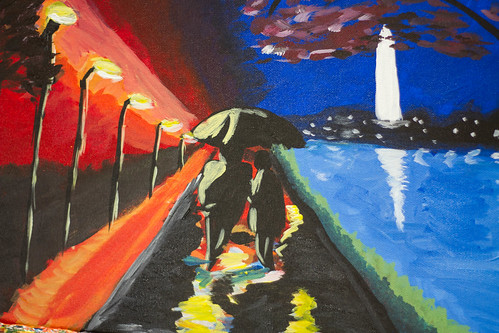 And even my little silhouette people turned out moderately okay! I tried painting a little dog walking alongside them, but it didn’t really work out… so I painted over it, haha. Guess I need some more practice before I can attempt to freehand stuff. Or maybe I just need to drink less wine while doing it… 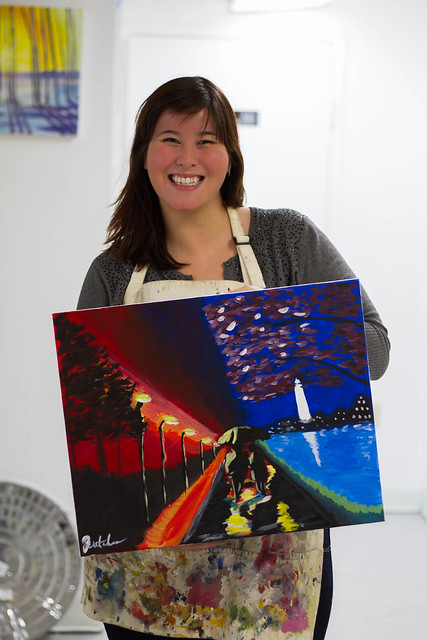 So yes! If you’ve been on the fence about trying one of these things out, I heartily recommend it. I had a great time, the instructor was really cool (she said my work was “strong” woot!) and the whole atmosphere was just fun and relaxing. This being my first time, I can’t really compare Blush ‘N’ Brush to any other places in the area, but I would definitely go again. It is a little bit pricey ($60) though, so just something to keep in mind. In my opinion, it was totally worth it, but I know some people might not want to pay that much to copy someone else’s painting, haha. Me though? I’m super proud of it, and will absolutely be hanging it up. 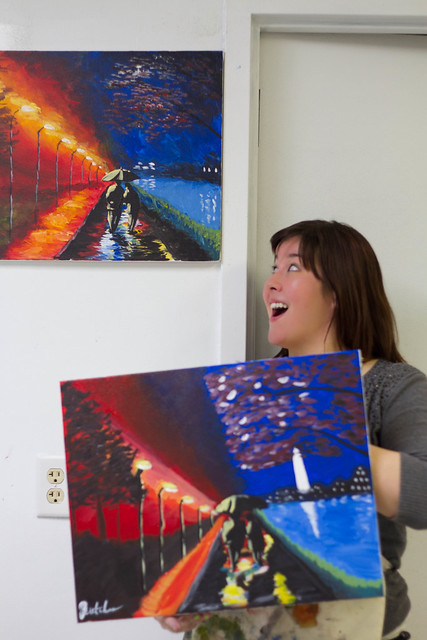 OKAY! So, that little giveaway thing, let’s get down to it! And the winner is…

Aileen! Whoo-hoo! And not only do you win the protein prize pack, but you might also possibly win the best comment ever prize. Since many of you probably recognize the name anyway, I feel the need to disclose that Aileen is a friend of mine — however, as you can see to the left, the plugin that I use to pick giveaway winners is completely random. Congratulations, Aileen!

Have you ever done a wine & painting class before? Are there any other fun, creative things, similar to this, that you would recommend checking out?