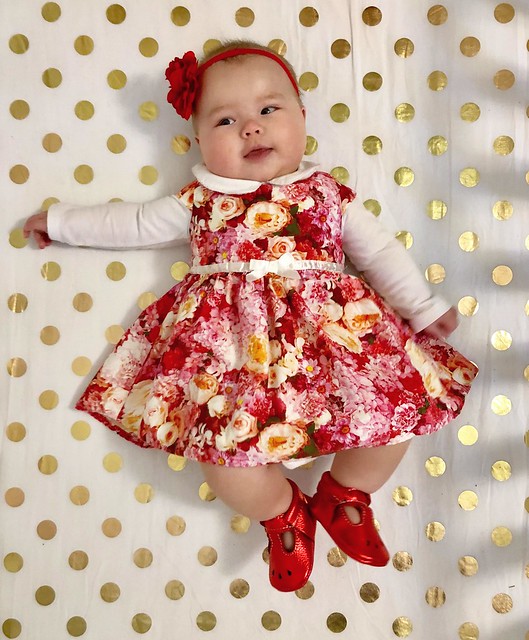 I gotta tell ya, four months of babyhood is a real roller coaster. Penny has made so many incredible leaps and bounds in her development, but it definitely came at a price. For a few weeks there I was seriously wondering if we’d ever get our happy little baby back! She was inconsolable being held by anyone but me (even Sean!), fussy even when I was holding her, and was back to waking up every two, three hours at night (one terrible night, it was every single hour). And every time she did wake up, she fought going back to sleep so hard (screaming, crying, thrashing) that the only way I could get her to calm down was by nursing her back to sleep every single time.

To say I was exhausted would be seriously understating it. But underneath all that fussiness and sleeplessness, clearly a lot was happening inside her tiny little baby brain! Because as of this past week, she is not only seemingly back to her old happy self, but has been crushing milestone after milestone to boot! 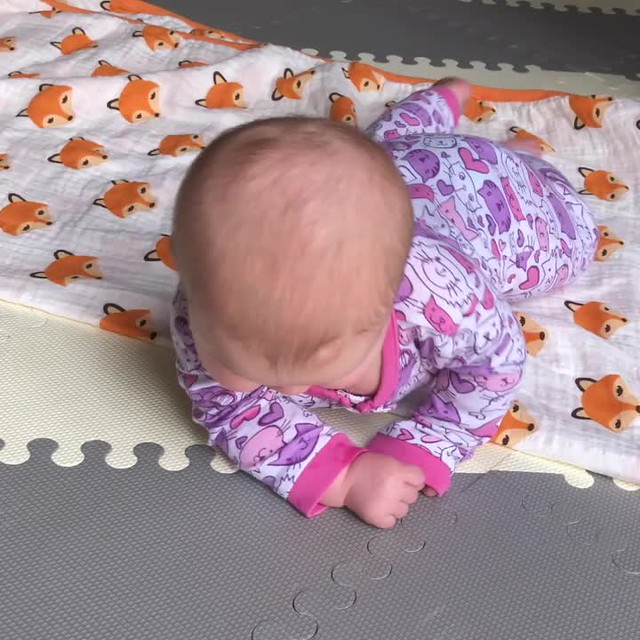 She can now roll from tummy to back like a pro — hooray! We also officially transitioned her to her crib last week (this development came as a direct result of the aforementioned terrible, waking-every-hour night, lol), and on that very first night she slept for ELEVEN HOURS STRAIGHT. 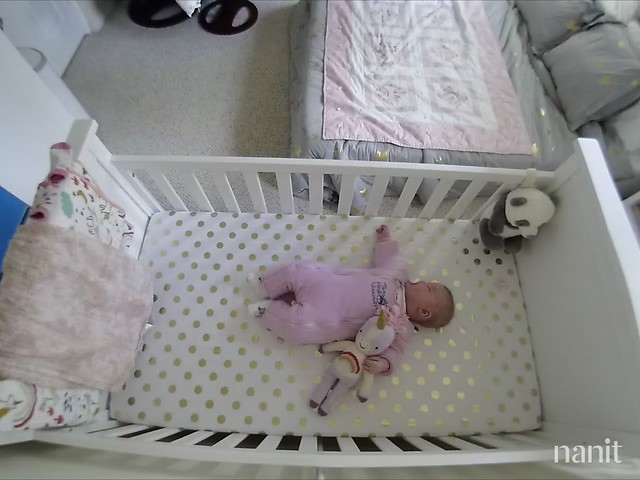 It’s only been like five nights so far, but except for one sad 2 AM wakeup on night #2, she has slept all night long with almost zero intervention from us! No more night feeding, no rocking — all we’ve done is pop her pacifier back in like, one time each night. She’s been able to get herself back to sleep every other time she’s stirred! The night before last, she slept 8:30 PM to 8:20 AM. Last night, she went in her crib at 8:30, fell asleep a little before 9, and is still snoozing away as I type this. Can you even BELIEVE IT?! 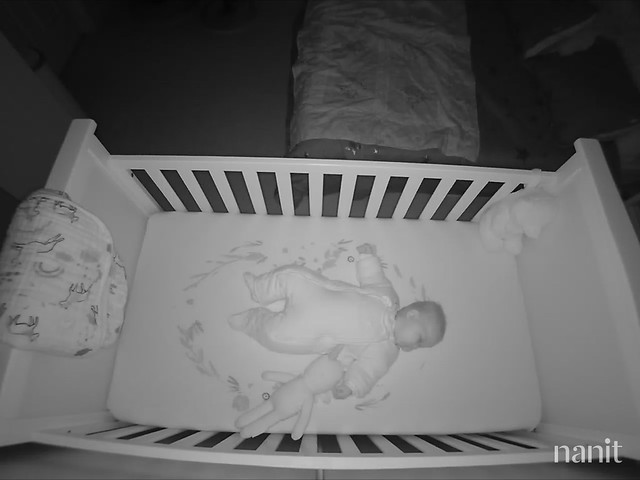 So you see? MIRACLES ARE REAL, PEOPLE! I mean, I know that things can — and probably will — change, and so I’m definitely not relying on this being our new normal just yet, but I’m certainly going to relish it while I can! And if rolling + sleeping through the night both weren’t enough, Penny has also started being able to sit up on her own! 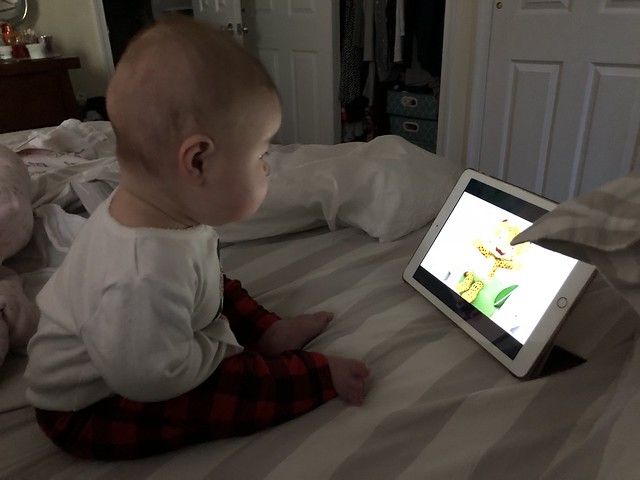 She can only maintain it for a maximum of, like, 90 seconds before toppling over, and only if she’s not too tired (but also not too distracted and looking all over the place, lol), but I’m still so proud of our little chunk nugget! She’s growing up so faaaaasst. 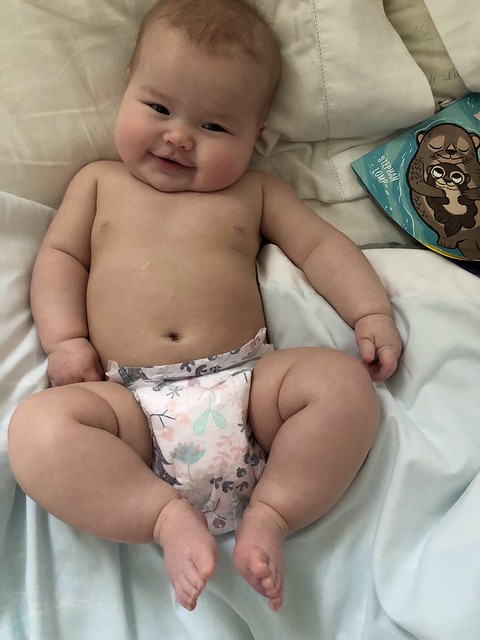 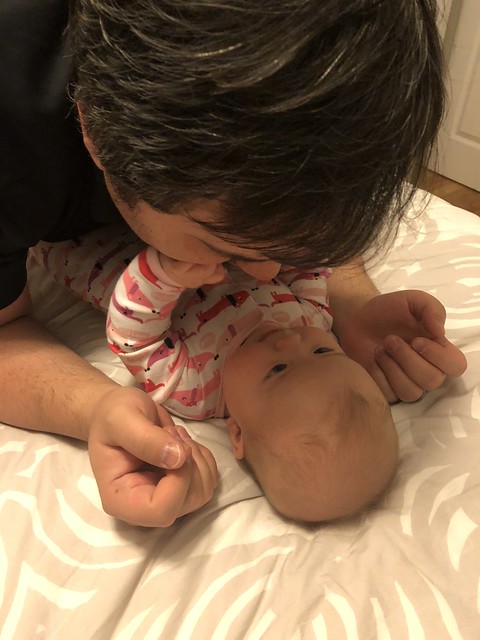 And like I said, she definitely seems to be much more generally content, and more like her old self as well. I guess that’s what almost 12 hours of sleep every night will do! The real test to see if she’s truly over this hump, however, will be how she acts at Grampy & PoPo Daycare (aka my parents’ house) today while I’m in the office. Last week when she was there, she barely ate anything the entire time, and my dad had to walk her around the house in her stroller for an hour just to get her to take a nap. -_- (Have I mentioned lately how much I love my parents?) 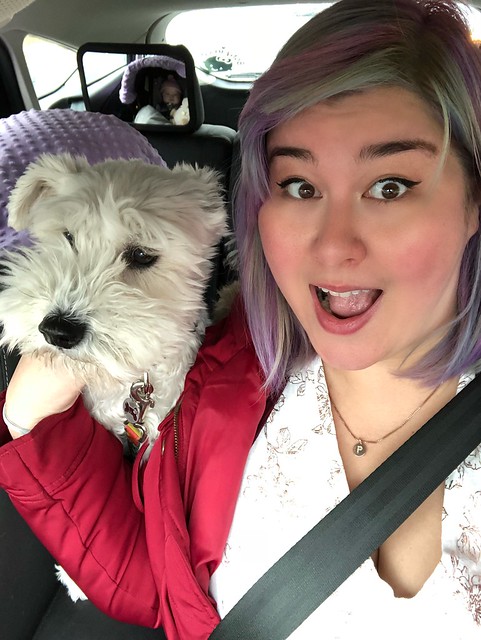 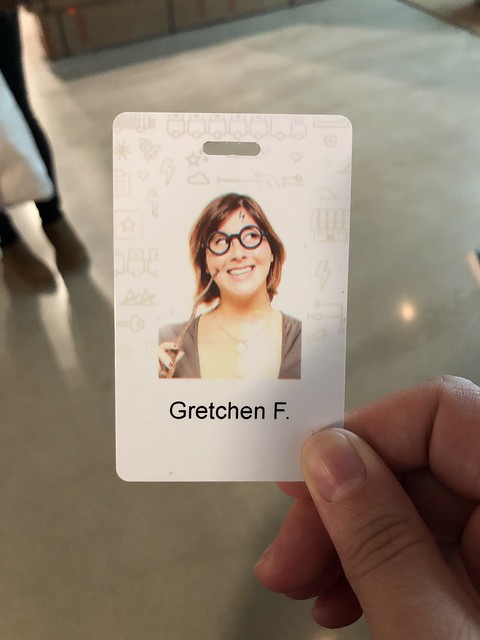 I still work from home the majority of the time and usually have my parents or my mother-in-law come over and watch Penny while I work. However, Yelp recently opened up a DC office, and so once a week I load the kids — human and dog — into the car, drop them off with my parents, and head into the city for the day.

There are many reasons that I love working for Yelp, but having an office here is giving me all sorts of new reasons to love this company (that go beyond even the cereal bar in the office kitchen!) It’s probably not too surprising, what with Yelp being a young tech company and all, but I’ve found they are really progressive and supportive of new & nursing moms. They have nice “mother’s rooms” in all of their offices for pumping, and this office is no exception! 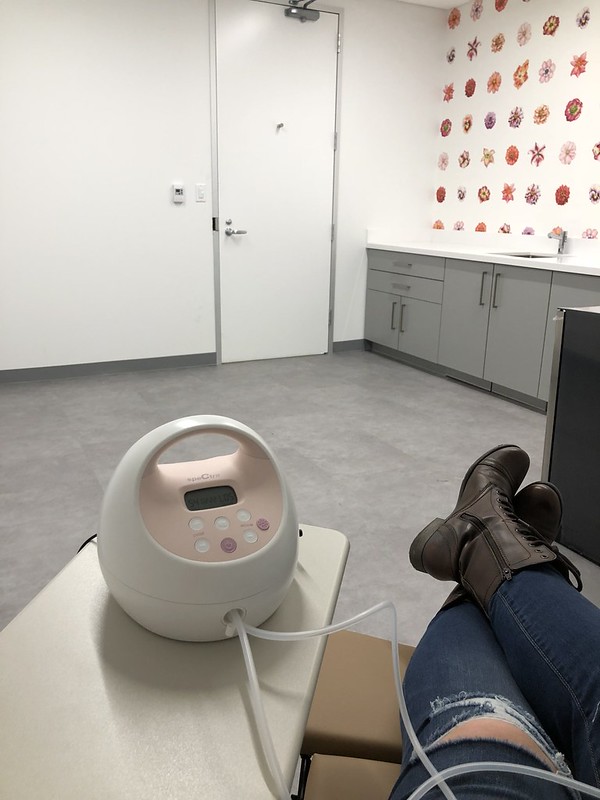 It’s not done yet, but there’s a comfy chair with a built-in desk/ledge, a mini-fridge, and a sink (plus some super cute wallpaper.) And once the mother’s room is fully set up, there will actually be a permanent, hospital-grade pump inside the room at all times. Each pumping mama will have their own set of parts (flanges and bottles, etc.) to go along with it, which means no more dragging my pump back and forth. Amazing!

Alas, the office is still being finished out, and the mother’s room won’t be complete until later this year. So until then, I still get the full #workingmom experience of lugging my pump along. Fortunately for me, however, I have two excellent options to help make that process so much easier!

Aeroflow recently reached out to ask if I was interested in testing out two different pumping products — The Motif Duo, a super lightweight, portable, battery-powered breast pump, and the Ju-Ju-Be Be Supplied pumping bag. (Aeroflow did send me these products to try for free, but they didn’t sponsor this post or anything, so these are my own honest opinions.) 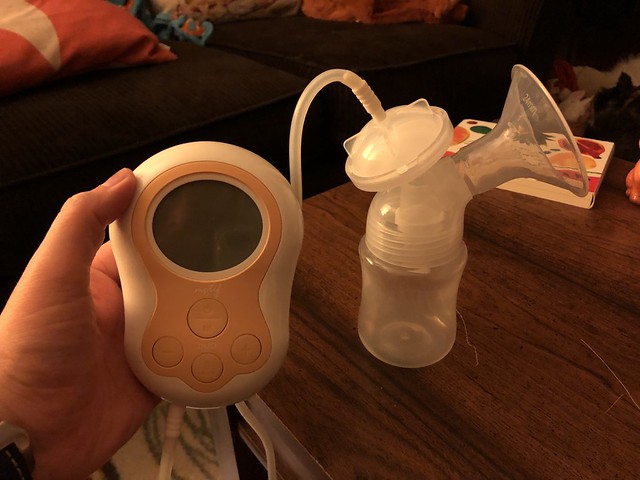 I originally ordered the Spectra S2 breastpump through Aeroflow while I was pregnant, and had a great experience going through them (they have a simple form on their site and contact your insurance for you — super easy!). I really do love my Spectra, as it’s quiet, powerful, and user-friendly. However, my one regret is that I didn’t get the battery-powered version (my insurance fully covered the S2, but I would’ve had to pay extra to upgrade to the S1) as I find it very limiting to be stuck in one spot while pumping.

So when Aeroflow asked if I was interested in trying out the Motif Duo, I was super jazzed. And I became even more excited upon opening the box and seeing how truly tiny this thing is! It literally fits in the palm of my hand — and in the back pocket of my jeans! 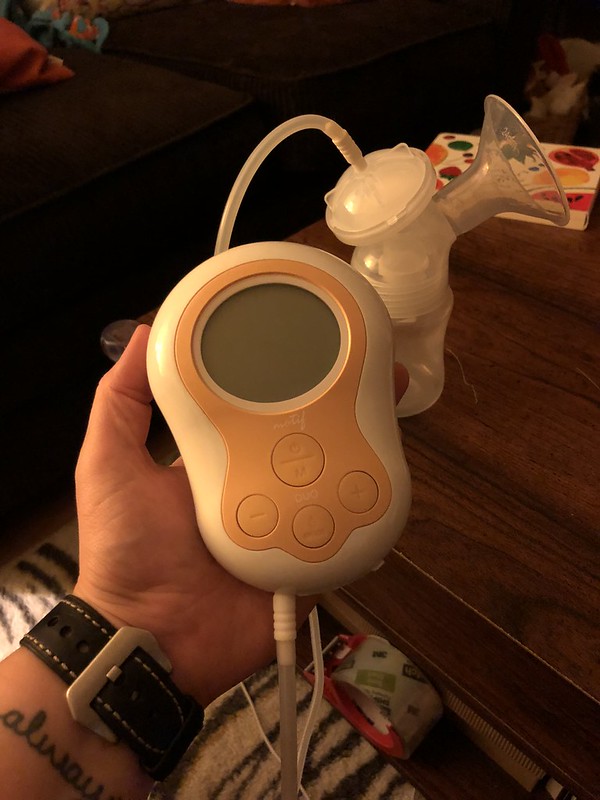 It’s got a rechargeable battery built right in, and is a double-electric pump so you have the option to pump one or both breasts (it’s set up for one in the photos above.) It’s a little bit louder than the Spectra once it gets going, but it operates similarly: there are two modes, one for stimulating your let-down, and one for milk expression. It’s crazy convenient that I can get up, walk around, and do whatever I need to do while pumping — the first time I tried it out, I was able to go and pick up Penny after she woke up from her nap, while still actively pumping! It’s also great for pumping one side while Penny nurses on the other — since it doesn’t need to be plugged in, I can easily move it around to avoid her wiggly legs. However, I will say that I haven’t found it to be quite as efficient or powerful as my Spectra — I have to pump for longer and at a much higher power level to get the same amount of milk.

So although the Motif is super convenient — both while at home, and to toss into my diaper bag and take with me wherever — sometimes I still want to pull out the big dog. Especially when I’m at the office and want my pumping session to be as quick but efficient as possible. Which is why I’m also really glad that Aeroflow gave me the chance to try out the Be Supplied breastpump bag as well! 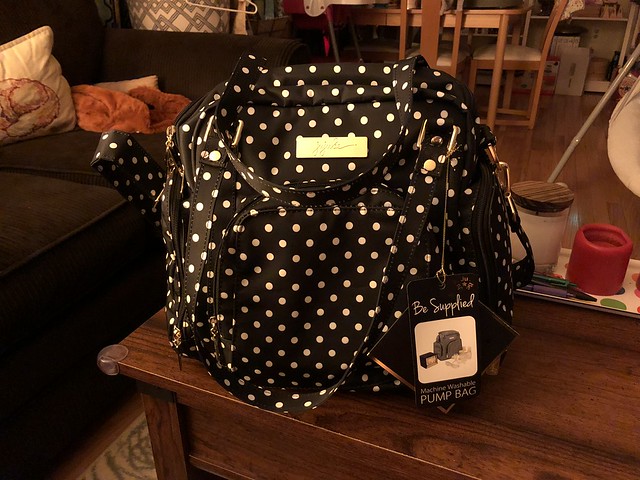 This bag is great — it is really nice to have a bag made specifically for carrying a breast pump! I was previously just dumping all of my pump stuff into an extra diaper bag that I had, but needed to remove everything from the bag in order to get things set up. The Be Supplied is great because it has a totally separate pocket for your pump that zips open from the side, which means you can access the pump without having to remove it from the bag! There’s room to keep the power adapter inside this compartment as well, so you literally just have to pull out the wall plug and you’re good to go! 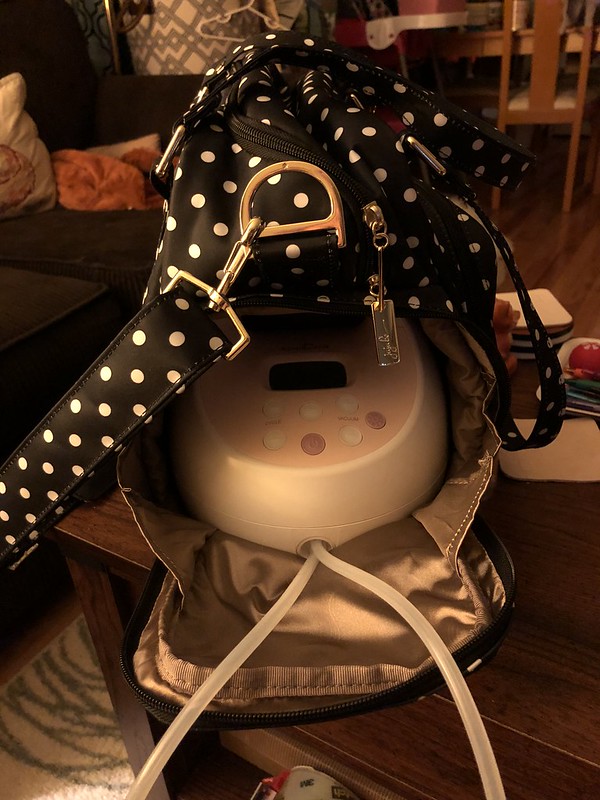 It also has additional exterior and interior pockets to keep your bottles/bags, flanges, tubing, and everything. There’s also a “mommy pocket” on the front, where you can keep your keys, wallet, etc, if you wanted to use this as your only bag. Alas, I still need to bring a separate bag when I go into the office, as the Be Supplied isn’t big enough for my laptop, but it’s still way more lightweight and compact than the other bag I was hauling around. Plus, it’s machine-washable which is a HUGE plus given the extreme likelihood of milk getting in or on it somewhere, and the print happens to perfectly match my Ju-Ju-Be BFF diaper bag!

Aaaanyway, that’s enough pumping talk for now, promise. I know how thrilling this topic must be for the majority of you, lol.  Honestly, going into the office once a week and having to do the pumping thing really just makes me even more aware of how lucky I am for my work situation! Pumping ’round the clock is definitely time consuming, and I am so grateful to have the flexibility to continue nursing Penny much of the time when I am working from home. 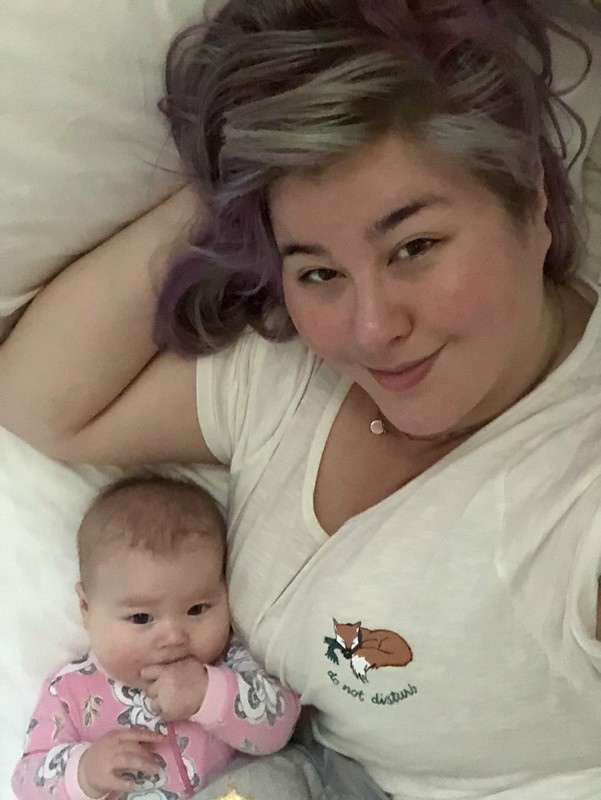 I shall leave you with this one final, non-baby-related milestone of my own: I’m down 9 pounds! Huzzah! 🙂