Once upon a time, in a land rather far away, a little brown-haired girl was sitting in the back of her 3rd grade classroom. The lesson of the day was multiplication, and the little girl’s teacher was showing the class a big yellow chart upon which she had written a multiplication table.

The little girl looked quizzically at the yellow board. She could see the board, and she could see that there were numbers written on it, but she couldn’t see them very clearly.

“Mrs. Roberts,” the little girl asked, squinting as she raised her hand high in the air. “I think you need to write the numbers bigger. I can’t read them.”

Of course, little did the girl know that she was, at that very moment, succumbing to become a victim of…

THE CURSE OF THE FOUR EYED MONSTER. 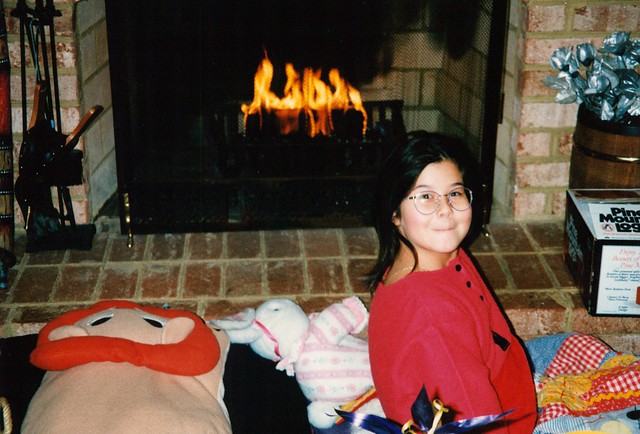 Okay, so maybe I’m being a little dramatic. Yes, I was indeed an adorable little girl with dark brown hair, who, in the 3rd grade (at the ripe old age of 7, in fact), found out that I needed glasses. But considering I converted to the blessed religion of disposable contacts at the even riper age of 11, it hasn’t really been a huge deal. I mean, I’ve spent more of my life with impaired vision than without, so I got used to it, you know?

Now, that being said, that isn’t to say that life hasn’t had it’s unfortunate circumstances due to the fact that I have terrible, terrible eyesight. My contacts prescription is -7.25 and my glasses prescription is -7.75 (or something like that). And for those of you who have no frame of reference for those numbers, that is pretty bad. In fact, my vision is so awful that it is absolutely impossible for me to go about my daily life without SOME kind of corrective lens. This isn’t some kind of “I need glasses when I read” or “I have worse vision at night” thing. This is straight up “I am basically blind” stuff right here. And that, naturally, means that the times when I am forced to go without glasses or contacts, it’s not super fun.

Like the time I was at camp, and my glasses broke when I fell off the tire swing, so I had to wear my prescription sunglasses for the rest of the summer. Or pretty much any time I’ve ever been swimming, ever, and unable to open my eyes underwater for fear of my contact lenses just floating on away. Or that time I was driving home from work, and I got something in your eye, so I rubbed my eye and then my contact popped right out — poof! And fell somewhere onto the bottom of my car so I had to drive the rest of the way home with one eye closed.

Yep. C’est la vie. Or at least, it is my life… until tomorrow morning. Because bright and early tomorrow, I am going under the laser and getting LASIK.

Getting laser eye surgery is something that I have honestly thought about since I was probably 13 years old. Of course, it wasn’t actually feasible from a monetary standpoint until now (this ish is ‘spensive!), but it does feel like I’ve thought about it for FOREVER. It’s just always seemed so… liberating. The thought of not being dependent on glasses or contacts to see. Not having my glasses fog up when I get hot (which is, er, a lot of the time, actually). Being able to wake up in the middle of the night and not have to squint to high Heaven just to see the time on my bedside clock. Being able to fall asleep without having to go through the horrible dry-eye that comes with falling asleep with your contacts in. Getting to avoid the entire pre-bed ritual of taking them out in the first place! Ahhhh, SO MUCH FREEDOM!

Of course, there is some vanity involved, too. I mean, if I wasn’t vain about it, I probably wouldn’t wear contacts in the first place, right? But that honestly isn’t the main reason that I want LASIK. Heck, since I’ve been confined to my glasses for the past two weeks (a pre-procedure requirement), I’ve even had many people tell me that I should wear my glasses more often!

It’s cool though, since I’ll be even more of a hipster if I wear the frames WITHOUT the lenses anyway, right?

Again, it really comes down to the liberation of not being dependent on something — glasses OR contacts — in order to be able to see. And while, admittedly, I’m a little scared of the idea of a machine cutting a flap into my eyes with lasers, I’m pretty darn excited, too. So think good thoughts for me tomorrow morning! Good, clear visioned, 20/20 thoughts.

Do you wear glasses or contacts? Have you had LASIK? Ever considered it?