Howdy folks! I hope you all had a wonderful Labor Day weekend. Unfortunately, mine has ended with me picking up a(nother) little cold, but prior to waking up with my head feeling like it needs to be popped (seriously, cannot even hear out of my right ear right now) the weekend was pretty rad! Let’s flashback to Friday for a hot second.

Shocking though it may seem, I actually did start my weekend off with a workout. I know, who am I? I ventured back for my third CrossFit class and it totally kicked my ass. 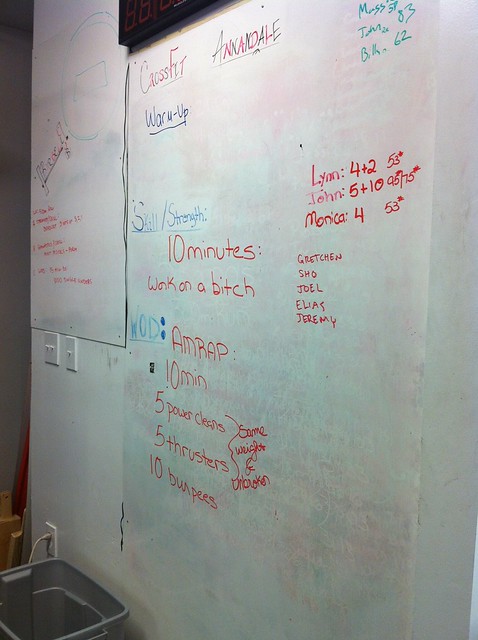 Coach Jeremy was cruel kind enough to document the experience for me. The warm-up this time was actually really fun. We grabbed a partner and a medicine ball (ours was 15 lbs) and went out to the parking lot. 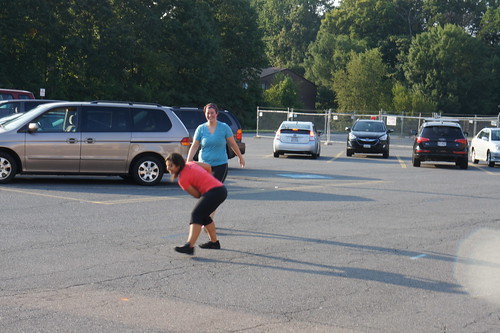 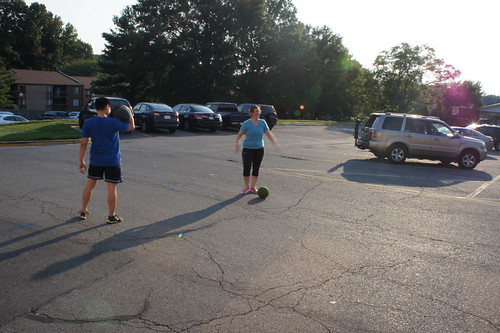 Turns out that just because something is shaped like a ball does NOT make it easy to throw, hahaha. 15 lbs is a lot to toss forward!

After the warm-up we spent 10 minutes working on a particular CrossFit skill that we have a hard time with (note how it’s phrased on the whiteboard in the first pic, hahaha). Since ALL of the skills are new to me, I didn’t particularly know where to start. Jeremy suggested I try working on my jump ropes, since “double unders” are a pretty standard CF move. I’m pretty sure that 11-year-old Gretchen would be VERY disappointed in how my jump rope skills have lapsed. I could barely make single unders happen. Oh well, something to work on, I guess! 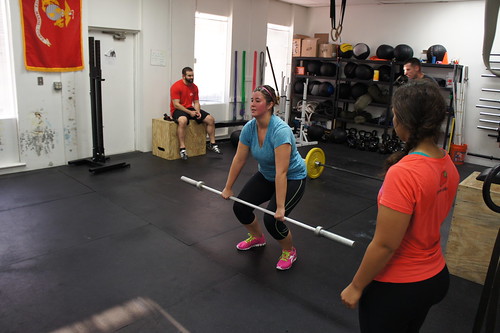 Then came the Workout of the Day itself. Just like last time’s, this was an “AMRAP”, or “As many reps as possible” in the allotted time (10 minutes). The WOD consisted of 5 power cleans, 5 thrusters, and 10 burpees. Since I had absolutely no clue was a “power clean” or “thruster” was, the coach spent a good amount of time going over the movements, and then gave me a little extra practice time, too. I practiced with a PVC pipe at first to get the general motion, and then did the actual workout with a 15-lb practice bar (rather than a 45-lb + weights bar like everyone else). At first I thought that 15-lbs was totally lame, and almost asked if I could use a heavier weight, but in the end I’m sooooo glad I didn’t try to get ahead of myself.

Dude, this ish be hard! I had a really hard time getting the proper form down for the power clean. A power clean is where you take the bar (from the floor for the others, from my knees for me — like in the picture above) and lift it up under your chin with this kind of jumpy/jerky move. It’s really hard for me to explain in words, but I found it very difficult to do correctly without leaning back and doing all sorts of weird stuff with my posture. I actually think it’s one of those things where it would have been a little easier with more weight on the bar, because I would have had more resistance keeping me in place. 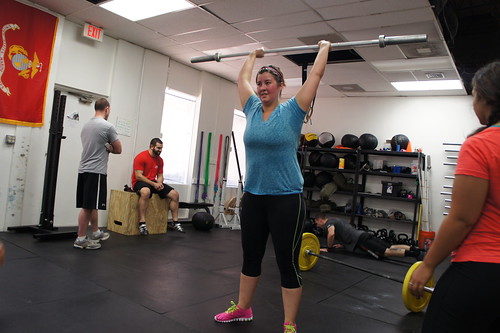 The thrusters I did okay on. They involve starting in a squat position with the bar under your neck, then standing and thrusting (get it?) the bar over your head and back (keeping your head “through the window” that your arms make). 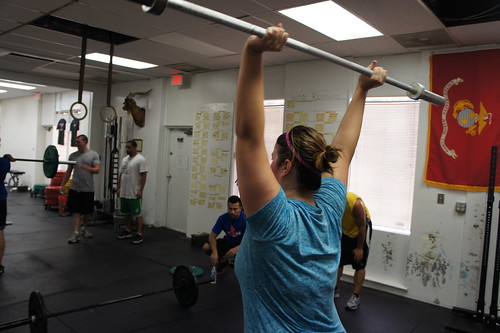 Then… came the burpees. 10 of them. After doing them at the first CrossFit class I attended (in which I was supposed to do 20 burpees), I thought that 10 would be no problem! Boy, oh boy, was I ever wrong. 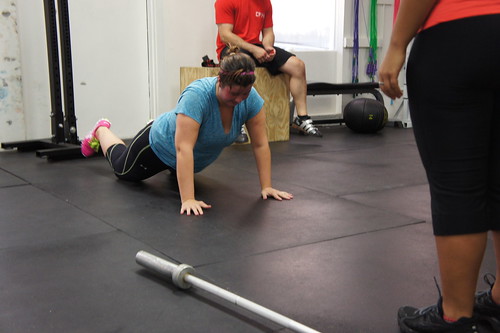 I don’t know what it is about this move but it is basically like an instant recipe for me to become nauseous. I don’t know if it’s all the bending, or just the fact that they’re always in combination with some other hardcore movement, but seriously. It is awful. I had to take like a 5 minute break after my second set because I suddenly felt so terriblw. Wtf, burpees? 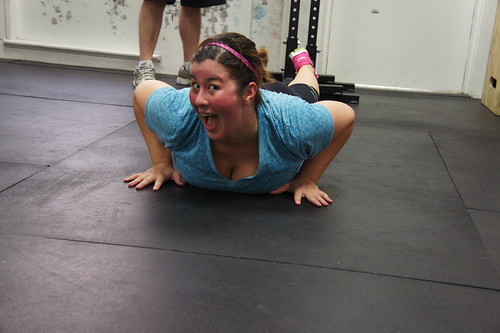 This face is all for show. (Also, apologies for the cleav shot, hahaha.) 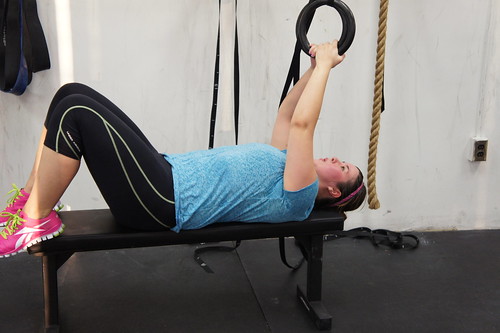 There we go. That’s a little more accurate as to how it felt.

In the end, I ended up making it through 3 full sets, plus an additional 7 (5 power cleans and 2 thrusters). Each class I’ve been to has been so different from the last, I still feel like an uber-n00b. That said, I can’t lie: the variety does make it kind of fun. And at least the fact that I started off the weekend with such a hard workout made me feel slightly less guilty for eating out so much over the weekend. I promise I had good reasons to though!

Saturday night my bestest best friend Bethany and her husband Colt came into town. Bethany and Colt have been living in Texas for the past two years and just moved back to Charlottesville. I couldn’t be happier! It’s hard to believe it’s been over TWO YEARS since I’d seen them last (at their freaking wedding!) Bethany and I were roommates throughout almost all of college (we were hallmates Freshman year), and we definitely have one of those friendships where it doesn’t matter how long it’s been since we’ve seen each other, we just kind of pick right up where we left off. Sean & I took the two of them to Dogfish Head and spent the night chatting away. We had such a great time I literally took 0 pictures. Oops! 🙂

But, much to my other friend Lara’s chagrin, I more than made up for the lack of picture-taking Sunday night. 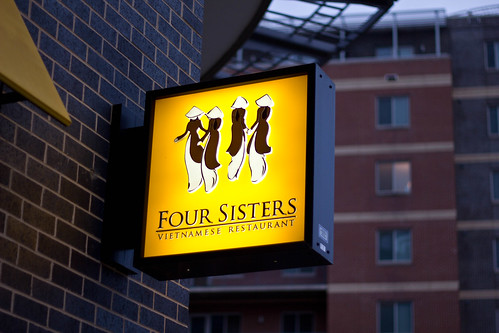 Sean & I met Lara and her new fiance (!!) Dan for dinner on Sunday at the Vietnamese restaurant Four Sisters. 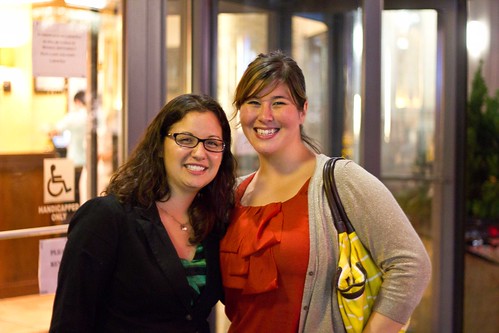 I’d been hearing rave reviews about this place for a long time but had never gotten a chance to go. Lara said she was in the mood to try something new, so I immediately suggested it! 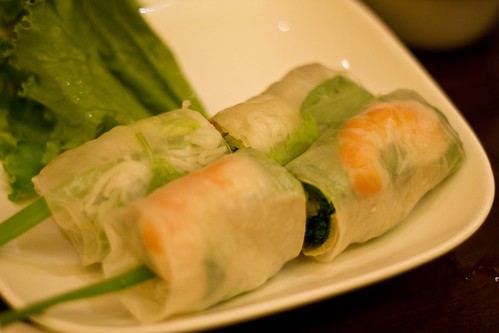 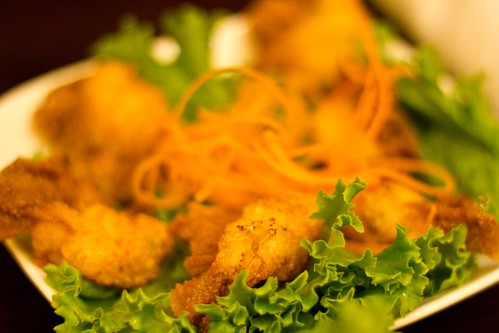 We started off sharing an order of fresh summer rolls (the best!) and fried shrimp wontons. When it came down to ordering, the menu is HUMONGOUS. Like, of Cheesecake Factory proportions. Luckily, I already knew what I was in the mood for: 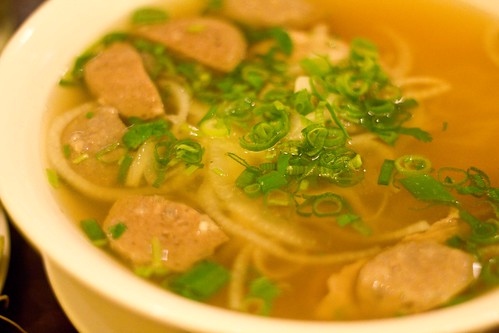 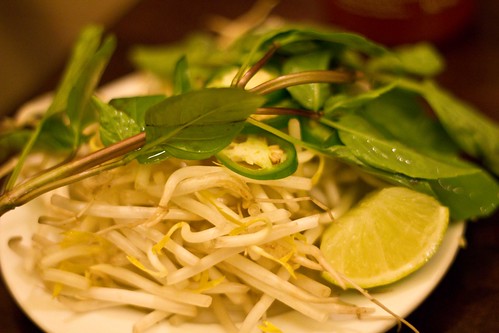 With all the appropriate accouterments, of course. 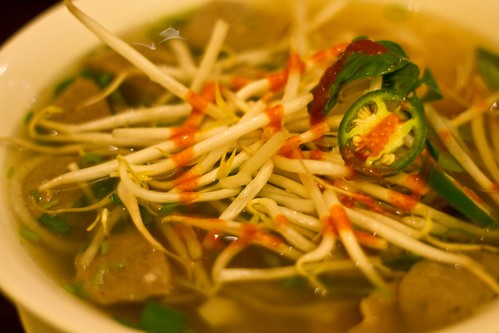 I thought it was really good. A lot of the time Pho broth can be way too strong for me, but Four Sisters’ was very balanced. I got it with beef and meatballs, which was kind of a weird combination but I dug it. The meatballs reminded me of the fish balls that my mom puts into soup noodles sometimes, so it was nostalgic for me. Next time I go to Four Sisters I’ll want to branch out a little for sure, but it had been so long since I had pho that there was no reasoning with me. The caramelized fish in clay pot is particularly well-reviewed on Yelp… 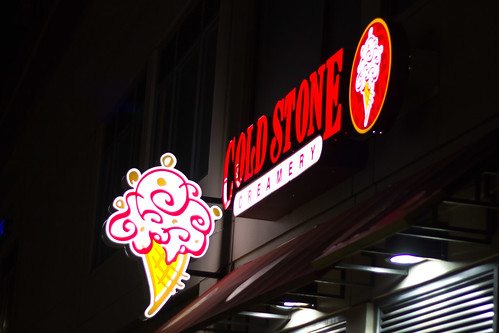 Since Four Sisters is located right in the cute new little shopping center in Merrifield, we walked right past a Coldstone on our way in. Both Lara and I agreed that we couldn’t just pass up the opportunity! 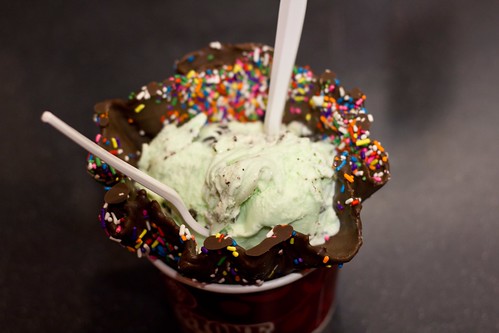 Sean and I shared a mint chocolate chip ice cream in a waffle bowl. Sadly, I think it’s the last bit of ice cream I think I’ll be seeing in a while. Good thing it was delicious!

Monday was spent primarily bumming around the house. There was one ill-fated trip to Target that I mildly regretted (Target was CRAZY on Labor Day!) but other than that, it was just a lot of Guild Wars 2…. as well as a lot of Virginia Tech Football talk, haha. I guess that since Sean and I didn’t really start dating until college football season was almost over, I didn’t fully understand what I was getting into dating a Hokie! As someone who is almost entirely apathetic when it comes to sports of any kind (especially including my own alma mater, JMU, ahahaha), I guess it’s a good thing they won last night?

Have a great day!